16 apr 2019
Soldiers Injure Many Palestinians, Including Schoolchildren, In Hebron 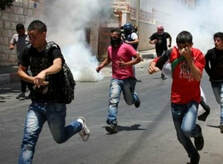 Israeli soldiers invaded, Tuesday, many Palestinians, including schoolchildren, in and around two schools in Hebron city, in the southern part of the occupied West Bank.

They added that the soldiers attacked many Palestinians, protesting the invasion, and fired a barrage of gas bombs, concussion grenades and rubber-coated steel bullets at them.

Israeli soldiers attacked, Tuesday, a Palestinian day laborer while working in Jaber neighborhood, in Hebron city, in the southern part of the occupied West Bank.

Media sources said the soldiers stopped and detained the worker, identified as Ishaq Ezzat Jaber, in his forties, while carrying construction supplies to a work site.

They added that the Palestinian suffered various cuts and bruises and was still detained by the soldiers at the time of this report.
Israeli forces open heavy fire at Gazan fishermen, farmers

The fishermen were forced to head back to shore in fear for their lives.

No injuries nor detentions were reported.

The farmers were also forced to flee the lands in fear for their lives. However, no injuries were reported.

The practice has in effect destroyed much of the agricultural and fishing sector of the blockaded coastal enclave, which has been under an Israeli air, land and sea blockade for nearly 12 years.
15 apr 2019
Israeli Soldiers Injure Many Schoolchildren And Teachers In Hebron

They added that dozens of schoolchildren and teachers suffered the effects of teargas inhalation, before local medics rushed to the educational facilities, and provided them with the needed treatment.

It is worth mentioning that the schools in that area are subject to daily violations and assaults by the soldiers, constantly stationed at the Abu ar-Reesh military roadblock, west of the Ibrahimi Mosque, and roadblock #60, south of the mosque, in addition to many roadblocks that are repeatedly installed near the schools.
14 apr 2019
Army Injures Dozens Of Schoolchildren Near Nablus

Israeli soldiers caused, Sunday, dozens of Palestinian schoolchildren to suffer the severe effects of teargas inhalation in a school in Orif village, south of the northern West Bank city of Nablus.

Media sources said the soldiers invaded the village, before storming the local high school, and fired a barrage of gas bombs at students protesting the invasion, causing dozens to suffer the effects of teargas inhalation. video

Medics rushed to the school and provided the wounded students with the urgently needed medical attention, and moved many of them to a local medical center for further treatment.

It is worth mentioning that the school has been a target of frequent attacks and violations by Israeli soldiers and illegal colonialist settlers and was shut down six times this current semester.

The latest assault was carried out after illegal Israeli colonists from Yitzhar colony, which was built on Palestinian lands, attacked the village and several surrounding village, and damaged to cars in addition to causing fractures to one Palestinian.
Israeli forces physically assault 15-year-old Palestinian boy in Hebron

A Palestinian minor was hospitalized after Israeli forces physically assaulted him in the Tel Rumeida neighborhood, in Hebron City, in the southern occupied West Bank.

Local sources confirmed that Yousef Abu Aysha, 15, was repeatedly physcially assaulted by Israeli forces on an Israeli military checkpoint in Tel Rumeida as he was passing through with his mother on Saturday evening.

Sources pointed out that Palestinian residents attempted to help Yousef immediately, however, Israeli forces opened fire and closed the checkpoint.

Sources added that Israeli forces allowed a Palestinian ambulance to reach Yousef and transfer him to a nearby hospital.

Medical sources confirmed that Yousef sustained various injuries and bruises all over his body, in addition he was severely traumatized from the assault.

The area of Tel Rumeida has long been a flash-point for tensions between Palestinians and Israeli settlers and military, as it is located near illegal Israeli settlements whose residents are notoriously aggressive toward Palestinians.

Tel Rumeida is located within the area of the city designated as H2, an area taking over the bulk of Hebron's Old City that is under full Israeli military control, and the site of five illegal Israeli settlements which continually expand into surrounding Palestinian neighborhoods.

The Israeli-controlled H2 area is home to 30,000 Palestinians and around 800 Israeli settlers who live under the protection of Israeli forces.

Palestinian students are regularly harassed by Israeli forces and settlers in Hebron City.

Meanwhile, Israeli police forces had evacuated students and staff from the Ibrahimi Elementary School, also in Hebron City, shortly after a suspicious body was found at the entrance of the school.

Israeli police forces sealed off the area and safely removed the suspicious body, however, did not identify its origin.

Locals believe that the suspicious body might have been placed at the entrance of the school by Israeli settlers.

The UN documented 111 Israeli attacks on education in the West Bank affecting more than 19,000 children in the last four months of 2018.

The UN documentation identified the Israeli attacks as “Incidents of interference in schools by Israeli forces,” which include “threats of demolition, clashes on the way to school between students and security forces, teachers stopped at checkpoints, and the violent actions of Israeli forces and settlers on some occasions.”

UN officials said, “More than half of the verified incidents involved live ammunition, tear gas and stun grenades fired into or near schools by Israeli forces, impacting the delivery of education or injuring students.”
Israeli navy shoots, injures Palestinian fisherman off Gaza's coast

A 23-year-old Palestinian fisherman was shot and injured by Israeli naval forces off the northern coast of the besieged Gaza Strip, on Sunday.

Locals told Ma'an that Israeli naval forces opened heavy fire at one of the Palestinian fishing boats while working three nautical miles off the northern coast, which is within the permitted fishing zone, and injured a fisherman.

Sources said that the fisherman was injured with rubber-coated steel bullets in his neck and back.

The fisherman, whose identity remained unknown, was taken to al-Shifa Hospital, west of Gaza City, to receive necessary medical treatment.

His medical condition was described as moderate.

As part of Israel's blockade of the coastal enclave, the Israeli army, citing security concerns, requires Palestinian fishermen to work within a limited "designated fishing zone," the exact limits of which are decided by the Israeli authorities and have historically fluctuated.

Palestinian fishermen, who try to make a living off the shores of the blockaded coastal enclave face daily risks, including routine harassment from Israeli naval forces, confiscation of boats and materials, detention and live fire.

Local rights organization, Al-Haq, has documented many cases of Israeli aggression toward Palestinian fishermen off the Gazan coast, calling the Israel's action against the fishermen "collective punishment" that imposes "difficult economic and social conditions."

According to the United Nations Office for Humanitarian Affairs (OCHA), in 1994, a permitted fishing range of 20 nautical miles was agreed on between Israel and the Palestinian Liberation Organization (PLO). In practice, Israel only allowed fishing up to 12 nautical miles until 2006, when the fishing zone was reduced to six and later to three.

OCHA found that the blockade has seriously undermined the ability for Gazan fishermen to make a living at sea.
13 apr 2019
Israeli forces moderately injure Palestinian in southern West Bank

A Palestinian was shot and injured with Israeli live fire, on Saturday afternoon, north of the southern occupied West Bank district of Hebron.

According to local sources, Israeli police forces fired live ammunition towards Hussein Abed Abu Fanous and injured him in the mouth.

The reason for the shooting remained unknown.

Medical sources confirmed that Abu Fanous was taken to a nearby medical center for necessary medical treatment.

Sources added that the live bullet hit Abu Fanous in the mouth, however, managed to go all the way through the other end, resulting in a single hole in each cheek.

According to local sources, Israeli forces opened fire at Palestinian farmers while working in their lands, east of Khuzaa town, in the eastern Khan Younis district, in southern Gaza.

The practice has in effect destroyed much of the agricultural and fishing sector of the blockaded coastal enclave, which has been under an Israeli air, land, and sea blockade for nearly 12 years.
In video - Israeli forces assault journalists, injure youth in Hebron City
In addition, Palestinian photojournalist, Musaab Shawar, told Ma'an that Israeli forces physically assaulted him and repeatedly cursed at another photojournalist, who was identified as Mousa al-Qawasmi.

Israeli forces shot and injured a Palestinian youth in the Burin village, south of the northern occupied West Bank district of Nablus, as he attempted to prevent an Israeli settler attack, on late Friday.

Ghassan Daghlas, an official who monitors settlement activity in the northern West Bank, told Ma'an that the Palestinian youth, Ubada al-Najjar, was shot and injured with Israeli live fire in the thigh as Israeli settlers attacked Burin village.

Daghlas confirmed that al-Najjar was transferred to Rafidia Hospital in Nablus City for medical treatment.

Daghlas pointed out that eyewitnesses from the Burin village said that allegedly an Israeli settler, not an Israeli soldier, shot al-Najjar.

The Palestinian government has no jurisdiction over Israelis in the West Bank, and acts carried out by Israeli settlers often occur in the presence of Israeli military forces who rarely act to protect Palestinian residents.

Since the occupation of the West Bank, including East Jerusalem, in 1967, more than 600,000 Israelis have moved into Israeli settlements in occupied Palestinian territory, in violation of international law.

Israeli gunboats on Saturday morning opened machinegun fire at Palestinian fishermen and their boats off the northern coast of Gaza City.

According to local sources, several fishermen working on their boats off the northern shore of Gaza City were attacked by the Israeli occupation navy, which forced them to return ashore.