The boy was evacuated to a Palestinian hospital where he said he was merely present at a funeral adjacent to the stone throwing at IDF forces; father: 'only a sicko shoots a blindfolded boy'

A hospitalized Palestinian teen said Monday he was shot in his thighs by Israeli soldiers after he tried fleeing while he was handcuffed and blindfolded during clashes near the town of Tekoa, south of Bethlehem, last Thursday.

The IDF said it was investigating the incident, which it said took place as Palestinian youths were throwing stones at Israeli soldiers.

Osama Hajahjeh, 16, said he was trying to run from soldiers when he was shot. He said the incident began after a funeral for a school teacher in his village of Tekoa, who had been hit by a car driven by an Israeli while walking at a busy intersection.

Hajahjeh said school was let out early for students to attend the funeral. After the burial, he said he was tackled by a soldier who jumped out of an olive grove and forced him to the ground. He said his hands were cuffed and his eyes covered with a cloth blindfold.

After the arrest, he said he could hear Palestinian youths shouting at the soldiers, while soldiers yelled back in Arabic and Hebrew.

"I got confused" and stood up, he said. "Immediately, I was shot in my right leg. Then I tried to run, and I was shot in my left leg and fell on the ground," he said, speaking from his hospital bed in the West Bank town of Beit Jala south of Jerusalem. Doctors said he is in stable condition.

A photo captured by a local photographer shows soldiers appearing to pursue a fleeing Hajahjeh with his eyes covered and hands tied behind his back.

The shooting set off a chaotic scene. Soldiers and Palestinians shouted at each other as the teen lay on the ground. One soldier took off the teen's belt and used it as a tourniquet to stop the bleeding.

Amateur video shows a masked soldier screaming and pointing a pistol at a group of anguished Palestinians as the teen lies on the ground. Later, a soldier scuffles with residents as another soldier fires into the air. A soldier and two Palestinian men then carry away the teen to medical care. video

In a statement, the military said the teen had been arrested after participating in "massive stone throwing" at Israeli forces.

"The detainee was held at a nearby spot and began running away from the force. The soldiers chased him, during which they fired toward his lower abdomen," it said.

The statement did not say anything about him being blindfolded or cuffed, but said the military offered medical treatment after the shooting and was investigating the event.

Hajahjeh's father, Ali, said he was thankful a soldier gave his son medical care. But he said his son never should have been shot to begin with.

"Only a sick person would shoot a blindfolded boy," he said.

The Israeli human rights group B'Tselem said the incident was the latest in a series of what it called unjustified shootings on Palestinian teens and young men. It says four Palestinians in their late teens or early twenties have been killed in the West Bank since early March.

The army has challenged the Palestinian witness accounts, but also frequently announces investigations into disputed cases.

B'Tselem has long criticized military investigations, saying they rarely result in punishments and alleging they're used to whitewash abuses by troops.

"Like the previous four cases we investigated, this is an example of Israel's reckless use of lethal fire, and the fact that the human lives of Palestinians count very little in the eyes of the army," said Roy Yellin, a spokesman for the group.
Israeli forces open fire at Palestinian farmers, fishermen

Israeli forces deployed in military watchtowers at the Sufa military site between the Rafah and Khan Younis districts, in the southern Gaza Strip, opened fire at Palestinian farmers working in the area.

Meanwhile, Israeli naval boats opened fire targeting Palestinian fishermen off the coast of Rafah City, forcing them to head back to shore in fear for their lives.

The practice has in effect destroyed much of the agricultural and fishing sector of the blockaded coastal enclave, which has been under an Israeli air, land, and sea blockade for 10 years.
Israeli police break into Jerusalem hotel, cancel event

The Israeli police on Sunday evening raided a Palestinian hotel in Occupied Jerusalem and shut down an event set to be held there.

Local sources said that the Israeli police stormed an event organized by al-Quds Holding Company and handed some of the audience interrogation orders.

Israel prevents the organization of Palestinian events in Occupied Jerusalem and considers them a challenge to its attempts to Judaize the city completely.
21 apr 2019
Students and teachers suffer from tear gas in Israeli attack on school

Dozens of Palestinian students and teachers on Sunday morning suffered from their exposure to tear gas fumes after Israeli soldiers attacked their school in the southern area of al-Khalil city in the occupied West Bank.

Sources from the administration of al-Khalil elementary school said that Israeli soldiers showered students and teachers with tear gas grenades as they were entering the school in the morning. video

They said that many students and teachers received on-site medical assistance after they suffered from their exposure to tear gas. 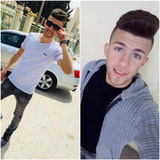 Israeli forces shot and injured a Palestinian, on Saturday, claiming that he attempted to carry out a stabbing attack against Israeli soldiers deployed at the Zaatara checkpoint south of the northern occupied West Bank district of Nablus.

The Israeli army said, in a statement, that its forces were able to "foil" a stabbing attack, adding that the Palestinian suspect was "neutralized." video

No injuries were reported among Israelis.

Witnesses told Ma'an that Israeli forces deployed at the checkpoint opened fire at a Palestinian who was passing by the checkpoint.
Israeli Soldiers Detain Groom, His Uncle, During Wedding Dinner In Jerusalem

Israeli soldiers and police officers invaded, Friday, a wedding dinner party in the al-‘Isawiya village, in occupied Jerusalem, and detained the groom and his uncle.

A video published by Wadi Hilweh Information Center in Silwan (Silwanic) on its Facebook page showed many officers invading the area and detaining the groom and his uncle.

Silwanic stated that the soldiers invaded the party because of Palestinian flags that were raised there, and demanded their immediate removal.

The soldiers then detained the groom and his uncle, and took them to a police station to sign an affidavit that all Palestinian flags will be removed, and no flags will be raised, or face imprisonment and high fines.
PCHR: “On 55th Friday of Great March of Return and Breaking Siege, Israeli Forces Wound 100 Civilians, including 23 Children, 5 Women, 4 Paramedics, and 4 Journalists”
As a result, dozens of the protesters were hit with bullets and teargas canisters without posing any imminent threat or danger to the life of soldiers.

During this week, Israeli forces have escalated their attacks against the medical personnel in the field, wounding 4 members of them and targeting an ambulance belonging to the Palestine Red Crescent Society (PRCS) in eastern Khan Younis with a teargas canister directly while in field and evacuating those wounded.

This indicates that there is an Israeli systematic policy to target the medical personnel and obstruct their humanitarian work that is guaranteed under the rules of the international humanitarian law.

At approximately 16:00, thousands of civilians, including women, children and entire families, started swarming to the five encampments established by the Supreme National Authority of Great March of Return and Breaking the Siege adjacent to the border fence with Israel in eastern Gaza Strip cities.
Hundreds of protesters, including children and women,  gathered adjacent to the border fence with Israel in front of each encampment and its vicinity tens  and hundreds of meters away from the fence. The protesters chanted slogans, raised flags, and in very limited incidents attempted to approach the border fence and throw stones at the Israeli forces.

Although the protesters gathered in areas open to the Israeli snipers stationed on the top of the sand berms and military watchtowers and inside and behind the military jeeps, the Israeli forces fired live and rubber bullets in addition to a barrage of tear gas canisters.

The Israeli shooting, which continued at around 19:00, resulted in the injury of 100 civilians, including 23 children, 5 women, 4 paramedics, and 4 journalists. Thirty-three of those wounded were hit with live bullets and shrapnel, 42 were directly hit with tear gas canisters and 13 were hit with rubber bullets. In addition, dozens of civilians suffered tear gas inhalation and seizures due to tear gas canisters that were fired by the Israeli forces from the military jeeps and riffles in the eastern Gaza Strip.

The following table shows the number of civilian casualties due to the Israeli forces’ suppression of the Great March of Return since its beginning on 30 March:

PCHR stresses that the Israeli forces should stop using excessive force and respond to the legitimate demands of the demonstrators, particularly lifting the closure which is the real solution to end the humanitarian crisis in the Gaza Strip.

PCHR reiterates the reported published in February by the UN Commission of Inquiry which emphasizes what came by PCHR and other Palestinian and international human rights organizations.  The report at the time concluded that the Israeli violations may amount to war crimes and crimes against humanity.

PCHR emphasizes that continuously targeting civilians, who exercise their right to peaceful assembly or while carrying out their humanitarian duty, is a serious violation of the rules of international law, international humanitarian law, the ICC Rome Statute and Fourth Geneva Convention.

Thus, PCHR reiterates its call upon the ICC Prosecutor to open an official investigation in these crimes and to prosecute and hold accountable all those applying or involved in issuing orders within the Israeli Forces at the security and political echelons.