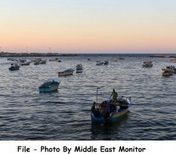 The WAFA Palestinian News Agency said the Israeli navy boats fired many live rounds at the fishing boats, close to the shore in northern Gaza, and abducted the four fishermen.

It added that the abducted fishermen have been identified as Majed Bakr, 55, Omran Majed Bakr, 27, Mohammad Ziad Bakr, 26, and Khali Johar Bakr, 22.

On Monday evening, the soldiers abducted a Palestinian merchant, identified as Hisham Abu Zayed, after interrogating him for several hours while trying to cross the Erez border terminal, in the northern part of the Gaza Strip.

Abu Zayed was returning home when the soldiers abducted him, and was taken to an unknown destination.

It is worth mentioning that the Israeli army have abducted twenty merchants from Gaza, since the beginning of this year.
5 dec 2016
Heavy material losses inflicted in Jordan Valley

Heavy material losses were inflicted on Palestinian properties in the Jordan Valley due to the Israeli military drills over the past week.

Over the past week, Israeli military vehicles have been deployed in large numbers throughout the Jordan Valley under the pretext of military drills.

Dozens of families were forcibly displaced during the drills period.

Heavy material losses are usually inflicted in such military drills in the area, where agricultural materials, sheds, and houses are partially or totally damaged.
Israeli maneuvers declared near Gaza borders

An Israeli army spokesman said that the one-day maneuvers involve both land and air forces.

The exercise is part of activities to improve the army’s operational readiness “for any emergency,” he added.

Two years ago, the IOF left nearly 2,200 Palestinians dead, many of them women and children, in a large-scale offensive on the Gaza Strip. The war which lasted for 51 days, also injured some 11,000 Palestinians.
IOF opens fire at Palestinian bird hunters in blockaded Gaza

The Israeli occupation forces (IOF) on Monday opened fire at bird hunters off the Eastern Cemetery, in Jabaliya, to the north of blockaded Gaza Strip.

Speaking to a PIC news correspondent, local sources said the IOF unleashed spates of gunfire on Palestinian hunters in eastern Jabaliya, forcing them to flee the area for fear of being killed.

No injuries were reported in the attack.

Bird hunters in the blockaded Gaza Strip have been always targeted by spates of bullet fire randomly discharged by the Israeli occupation army.
Israeli military vehicles deployed in Jordan Valley

Israeli military vehicles have been deployed in large numbers throughout the Jordan Valley, east of the occupied West Bank, under the pretext of military drills.

The local activist Aref Daraghmeh affirmed that Israeli occupation forces (IOF) intensified their presence in the area over the past week under the pretext of military drills.

He pointed out that Israeli military drills are scheduled to take place in the area over the coming two days.

The military drills will forcibly displace more than ten Palestinian families, he continued.

Israeli forces started deploying throughout the Jordan Valley last Tuesday as a prelude to carry out large-scale maneuvers in the northern Jordan Valley, forcing Palestinians out of their homes.

Israeli forces on Sunday at dawn opened fire at Palestinian fishing boats off the coast of the Gaza Strip, according to witnesses.

Witnesses told Ma'an that Israeli naval forces opened fire at the fishing boats while at sea in both the northern and southern Gaza Strip.

Shortly after the fisherman were shot at, Israeli naval forces detained two fishermen and confiscated their boats off the cost of Beit Lahiya in the northern Gaza Strip, according to the head of the fishermen's union Nizar Ayyash.

An Israeli army spokesperson told Ma’an she would look into reports of the incidents.

Israeli military incursions inside the besieged Gaza Strip and near the “buffer zone" which lies on both land and sea sides of Gaza, have long been a near-daily occurrence.

Palestinians who work near the “buffer zone” often come under fire from military forces, as the Israeli military has not made clear the precise area of the designated zone.

The Israeli army regularly open fires on Palestinian fishermen and farmers along the border areas, despite a ceasefire agreement that ended the 2014 war.

The practice has in effect destroyed much of the agricultural and fishing sectors of the blockaded coastal enclave.

According to the Palestinian Center for Human Rights (PCHR), Israeli forces detained 71 fishermen and confiscated 22 fishing boats throughout 2015.

Local sources told the Palestinian Information Center (PIC) that a large number of Israeli troops patrolled the streets of the town, with no known reason, before clashes suddenly broke out between them and young men.

They added that the soldiers used tear gas to disperse the angry youths, who were hurling stones and empty bottles at them.

Meanwhile, the IOF set up a makeshift checkpoint at the main entrance to the town and embarked on intercepting citizens and checking their IDs.
2 dec 2016
Young man shot, injured in the head in IOF shooting east of Gaza

Eyewitnesses said that a group of young men went to the eastern Gaza borders to demonstrate against Israeli violations in the West Bank and Jerusalem as they do each Friday. IOF soldiers met the youths with machinegun fire and teargas bombs.

The eastern areas of the Gaza Strip have been witnessing, since the Jerusalem Intifada erupted in October 2015, many clashes with the occupation forces on Fridays. Hundreds have been killed or wounded at the hands of the IOF during those confrontations.
IOF suppresses Bil’in peaceful march

Local sources affirmed that Israeli forces violently attacked the participants once they approached the Apartheid Wall, established at the expense of the town lands.

The area was then declared a closed military zone.

The peaceful march was organized by the popular committee against settlement marking the international day in support of Palestinian people.

Dozens of local and foreign activists took into the streets Friday afternoon despite the very bad weather in protest against Israel’s escalated settlement policy.

The protesters held Palestinian flags and chanted slogans in support of national unity and Palestinian constants.

They also called for the release of all Palestinian prisoners in Israeli jails.
1 dec 2016
Palestinian youth injured by Israeli bullet fire in Bethlehem

A Palestinian boy was shot and injured by the Israeli occupation forces (IOF) early Thursday morning at an eastern Bethlehem checkpoint, in the southern West Bank.

A PIC news correspondent quoted Red Crescent sources as stating that the IOF opened fire at a car driving near Mazmouriya checkpoint, to the east of Bethlehem, on claims that it did not obey the soldiers’ stop-orders.

Palestinian young man Moussa Mohamed Moussa, from al-Khalil’s Yatta town, was hit with a live bullet in his knee.

The injured youth was rushed to the Beit Jala public hospital so as to be urgently treated for the wounds inflicted by the Israeli bullet fire.