The Israeli occupation forces (IOF) on Tuesday morning carried out a small-scale incursion into the northern border areas of the Gaza Strip along with a number of military bulldozers.

The Israeli occupation forces (IOF) on Monday evening opened fire at Palestinian fishermen off the southern shores of Gaza Strip.

According to local sources, Israeli war boats opened their machinegun fire at a number of Palestinian fishing boats off the shores of Khan Younis and Deir al-Balah to the south of Gaza Strip.

Meanwhile, Israeli soldiers opened fire at Palestinian agricultural lands to the east of the Gaza borders.

No injuries were reported during the attacks.

Under an inhumane siege, the Israeli army keeps attacking, injuring and killing civilians, farmers and fishermen in Gaza Strip almost on a daily basis, in flagrant violation of the Egyptian-brokered ceasefire deal in Gaza.
12 dec 2016
PPS: Israeli Soldiers Abduct Sixteen Palestinians In The West Bank

Israeli soldiers abducted, on Monday at dawn, sixteen Palestinians, including children, from their homes in different parts of the occupied West Bank, including Jerusalem, the Palestinian Prisoners’ Society (PPS) has reported.

The Hebron office of the PPS, in the southern part of the West Bank, said the soldiers invaded many homes in various parts of the district, and violently searched them before abducting six Palestinians, mainly from the al-‘Arroub refugee camp..

It is worth mentioning that Khader is the brother of ‘Omar Madhi, who was killed by Israeli army fire on February 10, 2016.

In addition, the soldiers abducted Abdul-Rahman Hamdan, from his home in Beit Sira town, west of Ramallah.

In Jenin, in the northern part of the West Bank, the soldiers abducted Mos’ab Mahmoud Halayqa, 22, after invading his home and searching it.

15 Palestinians kidnapped, 4 injured by IOF at crack of dawn

At least 15 Palestinians were kidnapped by the Israeli occupation forces (IOF) at dawn Monday in an abduction sweep rocking West Bank provinces.

The Israeli radio claimed 12 Palestinians were arrested on allegations of involvement in anti-occupation activities.

The IOF also broke into the home of the slain Palestinian citizen Ibrahim al-Wahadna, in al-Duheisheh camp, to the south of Bethlehem, and summoned his brother Bilal, an instructor, to questioning.

Violent clashes flared up in the area shortly after the IOF soldiers climbed over the rooftops of Palestinian homes.

Red Crescent paramedics rushed the four injured youths to a local hospital so as to be urgently treated for the leg and knee wounds inflicted by the Israeli snipers.

Youngster Bilal Abu Yabis was arrested by the IOF in the assault while Muadh Al-Zaghari and nurse Ramzi Abu Yabis were summoned to interrogation shortly after the IOF wreaked havoc on their family homes.

At predawn time, four occupation patrols rolled into Burin town, in southern Nablus, and were deployed near the bypass road. A makeshift checkpoint was also pitched near Beit Furik checkpoint, to the east of Nablus.

At the same time, the Palestinian ex-prisoner Ahmad Halajiyeh, 50, was kidnapped by the Israeli soldiers from his family home in Jenin and dragged to an unidentified destination.

Heavily-armed Israeli troops were also stationed on the crossroads between Jenin, Haifa, and Nazareth, where flying checkpoints were arbitrarily pitched by the IOF.

Dozens of Israeli soldiers invaded, on Monday at dawn, the Deheishe refugee camp, south of Bethlehem in the occupied West Bank, searched many homes, before shooting and injuring four Palestinians during ensuing clashes.

The soldiers invaded the refugee camp from three separate directions, and searched many homes, an issue that led to clashes between them and dozens of youngsters.

The Palestinians hurled stones and empty bottles on the invading Israeli military vehicles, while the soldiers fired many live rounds and concussion grenades.

Medical sources at the Beit Jala governmental hospital said four Palestinians were shot with live rounds in their legs, and are currently receiving treatment for their wounds.

In addition, the soldiers summoned a young man, identified as Moath Jadallah Zaghari, for interrogation at the Etzion military base, and security center, south of Bethlehem.
Israeli Soldiers Assault A Palestinian Woman After Invading Her Home In Hebron 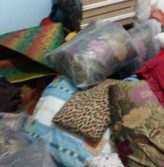 Many Israeli soldiers invaded, on Sunday at night, a Palestinian home in Shiokh town, northeast of Hebron, in the southern part of the occupied West Bank, and assaulted an elderly woman while violently searching and ransacking her home.

Halayqa added that the soldiers also used military dogs during the search, and repeatedly assaulted ‘Ayayda’s wife, especially in her chest, after she objected to their violent invasion and ransacking of her home.

The woman collapsed before Palestinian medics rushed to the property, and took her to a hospital in Hebron.

Doctors said they intend to keep her under observation for an additional day to conduct more checkups and X-rays.
11 dec 2016
IOF rolls into eastern Jenin, ravages agricultural shops

A PIC news correspondent said IOF soldiers aboard several military vehicles rolled into the town and ravaged agricultural stores before they subjected the shopkeepers to intensive questioning.

The IOF reportedly cordoned off the town and set up a military checkpoint at the road between Deir Abu Da’if and al-Jalama checkpoint, where Palestinian vehicles and IDs were subjected to exhaustive inspection.
IOF kidnaps citizen near Nablus, storms town in Jenin

The Israeli occupation forces (IOF) on Saturday evening kidnapped a Palestinian citizen at a checkpoint near Nablus city and clashed with young men in Anza town, south of Jenin.

Eyewitnesses told the Palestinian Information Center (PIC) that Israeli soldiers at Za’atara military checkpoint intercepted a car boarded by Rami Kalbani, who was driving it, and other passengers and searched it thoroughly before rounding up the driver.

They noted that Kalbani was taking passengers from Ramallah to Nablus, adding that the soldiers also confiscated the car and forced the others to walk to Nablus.

In another incident, an Israeli military force stormed Anza town, south of Nablus, and clashed with local young men.

Local sources said that soldiers aboard several military vehicles deployed themselves in the central area of the town and set up a makeshift checkpoint at its main entrance.