Three towns in al-Khalil mourned on Saturday morning four slain Palestinians after their bodies were released from Israeli morgues on Friday.

Hundreds of people in Beit Naim town marched this morning in the funerals of Sara Tarayra and Firas Khadour, while the martyr Mohamed Sararhin was buried in his home town of Beit Ula to the west of al-Khalil.

Along the same line, hundreds of local residents took part in the funeral of Khaled Bahar in Beit Ummar after declaring three days mourning.

The mourners held banners and chanted slogans demanding revenge and an immediate response to Israeli crimes.

Following the funeral, violent clashes broke out in the town with Israeli occupation forces (IOF) amid heavy use of teargas bombs and rubber bullets.

Firas Khadour was killed on Sep. 16, after IOF soldiers opened fired on the 18-year-old and his 18-year-old relative Raghad Khadour after the two allegedly attempted to carry out a car ramming attack, killing Fares instantly and critically injuring Raghad, who was hospitalized for weeks and later released after the accusation against both proved to be false.

On July 1, Israeli forces shot dead 27-year-old Sarah Tarayra, who was pregnant, after she allegedly attempted to carry out a stabbing attack against border police officers near the Ibrahimi Mosque in al-Khalil.

On the same day, 30-year-old Mohamed Sararhin was killed after succumbing to gunshot wounds sustained earlier in the day when Israeli forces raided the village of Beit Ula and opened live fire on him.

Along the same line, Israeli forces killed 15-year-old Khaled Bahar on Oct. 20 in the town of Beit Ummar for being allegedly involved in a rock-throwing incident.

In Nablus, thousands of Palestinians mourned the female martyr Rahiq Birawi, 23, who was killed on Oct. 19 at Hawara checkpoint.

Birawi was shot more than 30 times by four Israeli border police officers after she allegedly approached an officer with a knife. No Israelis were injured.

Since the outbreak of Jerusalem Intifada in October 2015, 243 Palestinians have been killed by Israeli forces and settlers.

Rights groups have repeatedly condemned the Israeli "shoot-to-kill" policy against Palestinians who did not constitute a threat at the time of their death or who could have been subdued in a non-lethal manner.
Overnight skirmishes with Israeli soldiers in Qaryut town

Violent clashes broke out on Friday night in Qaryut town, south of Nablus, after Israeli occupation soldiers stormed its neighborhoods.

A local activist reported that an Israeli military force stormed the town, brutalized some residents and prevented them from returning home.

He added that clashes started when two military jeeps got stuck in an alley of the town, which encouraged local young men to hurl stones at them.

Consequently, the soldiers responded by firing tear gas and stun grenades at the young men to protect the jeeps before withdrawing later from the town.

Qaryut is subjected to repeated raids on homes by the Israeli army, which tries to intimidate the families into preventing their kids from throwing stones at its soldiers during their presence in the town.
Israeli Soldiers Invade Shu’fat Refugee Camp 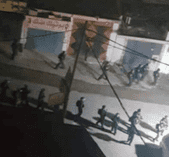 Israeli soldiers invaded, Friday, several neighborhoods in Shu’fat refugee camp, in the center of occupied East Jerusalem, and clashed with scores of youngsters who hurled stones and empty bottles on the advancing army vehicles.

The WAFA Palestinian News Agency said the soldiers fired dozens of live rounds, rubber-coated steel bullets and gas bombs on the protesters, after the army invaded the refugee camp from several directions.

There have been no immediate reports of injuries or abductions during the invasion, while the soldiers also surrounded the refugee camp.

On Thursday at night, the Israeli army said six of its soldiers were wounded, including one who was moved to a hospital, during clashes that took place in the refugee camp.

Similar clashes took place in al-‘Eesawiyya town, in the center of Jerusalem, Silwan town, south of the al-Aqsa Mosque in the city, Abu Dis town, southeast of Jerusalem, in addition  to the at-Tour and Jabal az-Zeitoun neighborhoods, overlooking the Old City.

In related news, the army abducted a young Palestinian man, identified as Mahmoud ‘Oleyyan, after stopping them at the al-Hamra roadblock, near the northern West Bank city of Nablus.

The Palestinian, from the al-Far’a refugee camp, south of Jenin, while he was heading back home from Jericho.
Dozens Injured After Israeli Soldiers Attack The Weekly Protest In Kufur Qaddoum

Palestinian medical sources have reported that scores of Palestinian, Israeli and international peace activists suffered the severe effects of teargas inhalation, after Israeli soldiers assaulted the weekly protest in Kufur Qaddoum town, east of Qalqilia, in the northern part of the occupied West Bank.

Morad Eshteiwy, the coordinator of the Popular Committee against the Annexation Wall and Colonies in Kufur Qaddoum, said the soldiers assaulted the protesters after they started marching from the center of the village.

He added that the soldiers fired many gas bombs, concussion grenades and rubber-coated steel bullets on the protesters.

The Popular Committee in Ni’lin said the soldiers assaulted the nonviolent protesters as they reached a construction site of the illegal Israeli annexation Wall, isolating the villagers from their lands.

It added that the soldiers fired many gas bombs and concussion grenades, causing scores of protesters to suffer the effects of teargas inhalation.

Mohammad Abdul-Qader ‘Amira, the coordinator of the Popular Committee against the Wall and Colonies in Ni’lin, said the soldiers deliberately fire gas bombs at many homes, causing several Palestinians, especially children and elders, to suffer the severe effects of teargas inhalation.

This week’s protest also marked the second anniversary of the death of Palestinian government minister, Ziad Abu Ein, who was killed by Israeli soldiers during a nonviolent activity, near Ramallah, in December 2014.
Israeli Soldiers Assault Nonviolent Activists In Bil’in

The protest was held by approximately 20 international activists, 20 Palestinians and 10 Israelis, who marched from the center of the village, carrying Palestinian flags and heading towards the villager’s isolated orchards.

They also carried posters of late Palestinian government Minister, Ziad Abu Ein, who was killed by Israeli soldiers during a nonviolent activity, near Ramallah, in December 2014, and chanted against the ongoing illegal Israeli occupation, colonies and escalating violations against the civilian population in occupied Palestine.

The army assaulted the protesters as they approached the gate of the Annexation Wall, and fired many gas bombs and concussion grenades at them, causing many to suffer the effects of teargas inhalation.

The soldiers also detained an Australian peace activist, and held him for several hours before releasing him.
15 dec 2016
Palestinian boy wounded after Jerusalem stabbing was hit by stray Israeli bullet

A 13-year-old Palestinian boy who was injured on Wednesday in the Old City of occupied East Jerusalem was wounded by Israeli forces when they shot and killed a Palestinian carrying out a stabbing attack, the child’s father said.

Iyad Juwilis said his two sons Fahmi and Nour were leaving school in the Old City when Israeli forces shot a 21-year-old Palestinian, identified by locals as Hamad Khader al-Sheikh, who allegedly stabbed and lightly wounded an Israeli police officer with a screwdriver.

The Israeli forces fired heavily in the wake of the stabbing attack, causing a stray bullet to hit Fahmi, who sustained fractures and superficial head wounds, his father said.

Juwilis said that his young son had to undergo surgery to stop the bleeding, and that his condition was now stable.

Meanwhile, al-Sheikh succumbed to gunshot wounds in the hospital.

According to Ma'an documentation, al-Sheikh is one of 243 Palestinians to have been killed by Israelis in a wave of unrest across the occupied Palestinian territory which began in October 2015, 20 of whom were killed in the Old City of Jerusalem.

Meanwhile, 34 Israelis were killed by Palestinians during the same time period.

Throughout the unrest, rights groups have repeatedly denounced what they have termed Israeli forces' "shoot-to-kill" policy against Palestinians who did not constitute a threat at the time of their death or who could have been subdued in a non-lethal manner.

While Israel alleges many of those were attempting to attack Israelis when they were shot, Palestinians and rights groups have disputed Israel's version of events in a number of cases.
Israeli soldiers raid Nabi Saleh, beat Palestinian youth

Five Israeli military vehicles entered the village around midnight after receiving reports of shots fired at an Israeli settler vehicle in the area and closed the village entrance, before assaulting Palestinian youths at a nearby gas station.

An Israeli army spokesperson told Ma’an they were looking into the reports.

Nabi Saleh is one of a number of Palestinian villages in the occupied West Bank and East Jerusalem which are known for their weekly Friday protests against the Israeli occupation.

Many Palestinian activists and rights groups have accused Israel of fostering a “culture of impunity” for Israeli settlers and soldiers committing violent acts against Palestinians.
Israeli police reportedly assault Palestinians during traffic stop

Israeli forces reportedly assaulted and detained four Jerusalemite Palestinians on Wednesday morning as they were headed to work, the Palestinians told Ma’an.

The four Palestinians -- Mahmoud and Muhammad al-Masri from the occupied East Jerusalem neighborhood of Ras al-Amoud, and Bahaa and Alaa Amro from the neighborhood of Silwan -- were heading to work in Tel Aviv on Wednesday

Mahmoud al Masri told Ma’an that an Israeli border police patrol forced the four to stop their vehicle before letting them go.

A while later however, al-Masri added, a civilian vehicle started following them, and its passengers, who said they were Israeli intelligence officers, forced them to stop and exit their car.

Al-Masri did not indicate what reasons the border police officers gave for stopping the Palestinians.

Al-Masri said that the four Palestinians were taken to the Israeli police station in Beit Shemesh for interrogation, adding that they went to receive medical care at the Hadassah hospital in Jerusalem upon being released.
Israeli forces open fire at agricultural lands in southern Gaza

Eyewitnesses told Ma’an that Israeli forces stationed inside a watchtower near the border opened fire in the area, without causing injuries.

Israeli military incursions inside the besieged Gaza Strip and near the “buffer zone," which lies on both the land and sea sides of Gaza, have long been a near-daily occurrence.

Palestinians who work near the unilaterally declared “buffer zone” between the Palestinian enclave and Israel often come under fire from military forces, as the Israeli military has not made clear the precise area of the designated zone.

The practice has in effect destroyed much of the agricultural sector of the blockaded coastal enclave.
Violent clashes with Israeli soldiers north of J’lem

Eyewitnesses said the skirmishes took place in Shuafat refugee camp and the nearby town of Hizma, northeast of Jerusalem.

They added that the events started when troops tried to storm the camp and the town as part of military drills.

The head of the Student Senate in Birzeit University Ahmad al-‘Ayesh, said the soldiers invaded many buildings in the university, starting approximately at 3:30 at dawn, and smashed many doors, especially the main administration office, a computer lab, the science college, and Kamal Nasser Hall.

Al-‘Ayesh added that the violent search caused excessive damage, and that the soldiers also illegally confiscated computers, flags, various files and students’ belongings, especially members of the Islamic Bloc and the leftist Popular Front for the Liberation of Palestine (PFLP).

Al-‘Ayesh stated that this was the third invasion by the soldiers into the university campus in the last three years, and called for immediate intervention by legal and human rights groups around the world, to stop the escalating Israeli violations against students, staff and their educational facilities.