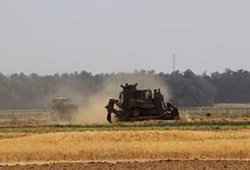 Several Israeli military vehicles and bulldozers invaded, on Wednesday morning, Palestinian agricultural lands in Beit Lahia, in the northern part of the Gaza Strip, and uprooted parts of them, close to the border fence.

Media sources in Beit Lahia said four armored bulldozers and several jeeps, stationed in the Zikim military base across the border fence, invaded the farmlands and bulldozed them.

The soldiers also used smoke bombs to cover their invasion, before advancing dozens of meters into the agricultural lands.

The invasion is part on ongoing violations and invasions into border areas in the coastal region, in addition to the frequent assaults against the fishers and their boats, in Gaza territorial waters.
Army Kills A Young Palestinian Man, Injures Another, In Jerusalem 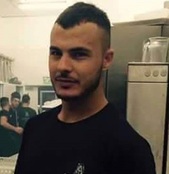 Israeli soldiers shot and killed, on Wednesday at dawn, a young Palestinian man, and injured another, after the army fired several live rounds at a Palestinian car in the town of ar-Ram, north of occupied East Jerusalem.

Local sources said three Palestinians were in the car, and did not notice the deployment of Israeli soldiers, who fired many live rounds on the car, killing Anwar Salaima, 22, and seriously wounding Fares Khader Resheq, 20, while the kidnapped Palestinian has been identified as Mohammad Nassar, 20.

The slain Palestinian, and the wounded, were shot by the soldiers, from a relatively close range.

Eyewitnesses in ar-Ram said dozens of soldiers and army vehicles invaded the town, at dawn, and closed its main road, before demolishing a blacksmith’s workshop.

They added that clashes took place in the area, and extended to Bank of Jordan Street, and a local bakery, in addition to al-Kassarat Street and Wadi Ayyad neighborhood.

A Palestinian young man was injured in the shooting.

Spokesman for Health Ministry Ashraf Qudra said in a brief statement that a 27-year-old Palestinian suffered moderate injuries in his hand after being shot by Israeli soldiers east of Beit Hanoun.

The injured young man was immediately taken to hospital for treatment.

The attack came as part of Israeli almost daily violations of the ceasefire agreement reached in August 2014 that ended the Israeli 51-day war on Gaza.
12 july 2016
19 Palestinians arrested during clashes across West Bank, O.J’lem

19 Palestinians were arrested and two others were injured during the campaign. The clashes broke out when hundreds of Israeli settlers stormed under heavy military protection Youssef tomb east of Nablus.

In their turn, Israeli forces fired a hail of rubber bullets and teargas bombs. Ten Palestinians were injured including five who choked on teargas.

Several local homes were also stormed and searched during the raid. Similar clashes were reported in Qabatia town after being stormed by Israeli forces. In Qalqilia, violent clashes broke out when Israeli forces stormed its neighborhoods amid heavy firing of teargas bombs and rubber bullets.

Seven locals were arrested during the confrontations. A young man suffered rubber bullet injury in his foot while several others suffered from effects of teargas inhalation.

In al-Khalil, Israeli forces stormed overnight and at dawn today several towns and villages which led to the outbreak of clashes with local youths.

At least two locals were shot and injured during the clashes, while dozens others suffered from effects of teargas inhalation. Israeli forces also intensified their presence in Sa'ir town, which led to the outbreak of clashes at the main entrances to the town.

Similar raids and arrests were carried out in Dura town, west of the al-Khalil. Local homes and a mosque were stormed during the campaign under the pretext of looking for “wanted” persons.

A whole family, a husband, his son, and wife were arrested from their house in Dura and taken to an unknown detention center. Another young man was arrested during the campaign, while a woman was injured when Israeli forces violently stormed her house. Two more arrests were carried out in occupied Jerusalem and Bethlehem.

The Qalqilia office of the Palestinian Prisoners Society (PPS) has reported that the soldiers invaded the city from various directions before storming into homes and searching them.

The soldiers also fired many gas bombs and concussion grenades during the invasion; no injuries were reported.

The soldiers stopped the three Palestinians while driving near Ibn Sina College in Huwwara, allegedly for driving and an unlicensed car, and abducted them.

Also in Nablus, dozens of Israeli colonists, and soldiers, invaded Qabr Yousef (Joseph Tomb), in Nablus, leading to clashes with local youths, who hurled stones and empty bottles on the military vehicles, while the soldiers fired live rounds and rubber-coated steel bullets.

The soldiers also hurled a concussion grenade at a Palestinian car with Israeli license plates, causing it to crash into another vehicle.

In addition, the soldiers invaded Burqin town, south of Jenin, and kidnapped a young man, identified as Mohammad Yousef Khaled Khallouf, 22, after storming his family home and searching it. The family said the soldiers detonated the front door of their property, before invading the property. 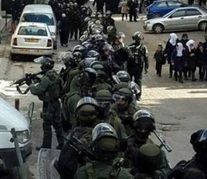 Israeli soldiers invaded, on Monday evening, the Shiokh town, northeast of the southern West Bank city of Hebron, and injured many Palestinians during clashes that took place after the invasion.

The Palestinian Red Crescent said the soldiers prevented its ambulances from entering the town to provide the needed treatment to the wounded Palestinians.

Later, the medics entered the town through alternate routes, without their ambulances, and provided the needed treatment to many Palestinians who were shot by rubber-coated steel bullets, and those who suffered the effects of tear gas inhalation.

The town, along with various communities in Hebron, has been subject to constant invasions over the past eleven days, after the army placed concrete blocks and sand hills on its main entrances, and occupied rooftops of several homes to use them as military towers.
IOF storms al-Shyoukh town in al-Khalil

Local sources said that the clashes broke out when Israeli forces stormed the town amid heavy firing of teargas bombs and rubber bullets.

At least two locals were shot and injured during the clashes, while dozens others suffered from effects of teargas inhalation.

Al-Shyoukh town was subjected to tight restrictions over the past three days after IOF soldiers closed all its entrances and main roads. Several checkpoints were also erected at the entrances to the town.
11 july 2016
IOF torches 10 agricultural dunums southern al-Khalil

The Environmental Quality Authority in al-Khalil city pointed out that the lands torched by Israeli army soldiers belong to the al-Sawadeh Palestinian family in the village which is located within the Separation Wall.

The inhabitants of the village have to get Israeli permits in order to pick the olives every year, the authority added.

It said that the authority’s teams witnessed the effects of fire from a distance since they could not approach the place because of the Separation Wall.
Clashes erupt throughout al-Khalil

Violent clashes broke out Sunday evening in Takoa town in al-Khalil between local youths and Israeli Occupation Forces (IOF) after Israeli settlers carried out provocative acts in the area.

Local activist Mohamed Badran affirmed that the clashes broke out when Israeli settlers closed the main road in the town and started chanting anti-Arab slogans while raising Israeli flags under the protection of Israeli forces.

During the clashes, Israeli forces fired rubber bullets and teargas bombs at the protesters.

Along the same line, Israeli forces stormed Sunday evening Sa'ir town which was subjected to a large-scale raid and arrest campaign over the past days.

On the other hand, Israeli forces closed Beersheba road, south of al-Khalil, and prevented Palestinian movement in order to provide protection for a march for the settlers during which they chanted racist slogans calling for deporting and killing Arabs.

IOF soldiers also tightened restrictions on Palestinians living near the road. In occupied Jerusalem, Israeli forces arrested a 22-year-old young man from Issawiya town east of the city for allegedly being involved in a stone-throwing incident.
Israeli Soldiers Invade Farmlands In Southern Gaza 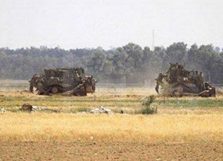 Eyewitnesses said four Israeli tanks, and three bulldozers, advanced more than 150 meters into the Palestinian lands, bulldozed some of them, and installed sand hills, close to the border fence.

They added that the Israeli vehicles came from the Kissufim military base, across the border fence, and fired many smoke bombs during the invasion.

The invasion is part of repeated Israeli violations targeting the Palestinians and their lands in border areas, in the northern and eastern parts of the coastal region.

The soldiers frequently prevent the farmers from working on their own lands, in addition to constant violations against Gaza fishers in Palestinian territorial waters.
Hebron Siege Continues For The 11th Day; Army Kidnaps Six Palestinians 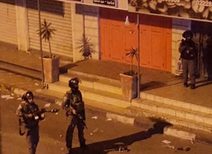 The strict Israeli siege and collective punishment imposed on Sa’ir and Bani Neim towns, in the southern West Bank district of Hebron, continued for the eleventh consecutive day, while the soldiers continued the invasion of homes, in various areas, and kidnapped six Palestinians, on Monday at dawn.

Dozens of soldiers invaded, during early dawn hours, Sa’ir town and the Shiokh village, before breaking into and ransacking dozens of homes, and kidnapped a young man, identified as Hamza Rajab Halayqa.

Media sources in Hebron said the invasions of homes are still ongoing, while the soldiers continued to interrogate dozens of Palestinians in their own properties.

The soldiers also invaded a home, belonging to resident Ismael Saber Shalalda, in Sa’ir town, ransacked the property, and turned it into a military post and a monitoring tower, in addition to installing military equipment in the property.

In Doura, dozens of soldiers invaded the center of the town, searched homes and kidnapped ‘Ayed Ahmad al-Faqeeh, along with his son, Akram, in addition to another Palestinian, identified as Khallaf Jabara Talahma, after violently searching their homes.

In addition, the soldiers invaded the al-Borj village, near Doura, and searched homes before summoning one resident for interrogation in Etzion military base.

In Hebron city, the soldiers kidnapped Malek Mohammad Elia Abu Aisha, 32, after they invaded his home in violently searched it.