An Israeli landmine detonated, on Sunday evening, while a Palestinian shepherd was herding his live stock in the Sakout area, in the West Bank’s Northern Plains, killing five of his cows, while the shepherd escaped the explosion unharmed.

Aref Daraghma, a human rights activist, said the three cows are owned by Fayez Yousef Daraghma, and were injured in a grazing area.

Daraghma stated that many Israeli soldiers rushed to the scene and detained five Palestinian shepherds.

He added that the area has many live landmines, an issue that poses constant threats to the Palestinian shepherds and their livestock.

It is worth mentioning that the army frequently conducts live fire training, including shells and bombs, in the Northern Plains, and other areas in the West Bank, such as lands near in Hebron governorate, Tubas, Nablus, the Jordan Valley, and even in certain areas in the Negev.

Many Palestinians, including children, have been killed by these objects, and hundreds have been injured.

A Palestinian, Sunday, was shot and injured by live ammunition fired by Israeli forces, after he allegedly approached the barbed-wire fence between Gaza and Israel, to the east of Khan Younis, south of the Gaza Strip, said WAFA medical sources.

Israeli forces stationed along the Gaza borders reportedly opened live fire on a group of Palestinians after they allegedly approached the Israeli-installed barbed-wire fence along Gaza’s border with Israel, shooting and injuring a youth.

A Palestinian was admitted to the European hospital in southern Gaza, with live ammunition wounds to the foot. His condition was described as moderate.

More than 120 Palestinians have been killed by Israeli forces since March 30, the start of the ‘Great March of Return’ protests. The protests left over 13,000 other people injured, including more than 300 critical condition.
Israeli army launches limited incursion into southern Gaza

The PIC reporter said that the bulldozers leveled Palestinian lands and installed barbered wire along the border fence.

At the same time, the Israeli occupation forces stationed at the border opened fire at a group of Palestinian youths near the Great Return March camps east of Khan Younis.

Israeli military incursions into the besieged Gaza Strip and near the border fence have long been an almost daily occurrence.
Palestinian injured, another arrested by soldiers in Ramallah

One Palestinian young man was injured and another was arrested on Sunday morning after Israeli soldiers stormed the villages of Beit Reema and Nabi Saleh, northwest of Ramallah city in the occupied West Bank.

The sources added that violent clashes broke out in the village after the arrival of military reinforcements to back up the special force.

Drones were also seen overflying the village and nearby areas during the raid.

After the troops withdrew from the village, clashes reportedly took place between Palestinian young men and soldiers in the nearby village of Nabi Saleh.

One young man suffered a rubber bullet injury in his face during the events.
Israeli fighter jets target multiple positions throughout Gaza Strip

An explosion is seen in Gaza city after an airstrike by Israeli forces on June 2, 2018

Israeli fighter planes have carried out multiple airstrikes on a series of locations spread out through the Gaza Strip.

Earlier in the day, Israeli tanks also fired upon the coastal area.

The Israeli army has confirmed the attacks, claiming they were launched in response to rockets fired at the occupied territories.

Amid the flare-up in the Gaza Strip, Hamas said Palestinian resistance groups have agreed to a ceasefire in the blockaded coastal sliver as long as Israel abides by a truce.

"After the resistance succeeded in confronting the [Israeli] aggression ... there was a lot of mediation in the past hours,” Khalil al-Hayya, Hamas’ deputy chief in Gaza, said in a statement on Wednesday.

“An agreement was reached to return to the (2014) ceasefire understandings in the Gaza Strip. The resistance factions will abide by it as long as the Occupation does the same,” he added.

Tensions have been running high along the Gaza fence since March 30, which marked the start of a series of protests, dubbed “The Great March of Return,” demanding the right to return for those driven out of their homeland.

The Gaza clashes reached their peak on May 14, the eve of the 70th anniversary of the Nakba Day (the Day of Catastrophe), which coincided this year with the US embassy relocation from Tel Aviv to occupied Jerusalem al-Quds.

At least 65 Palestinians were killed and more than 2,700 others wounded as the Israeli forces used snipers, airstrikes, tank fire and tear gas to target the Gaza demonstrators on May 14.

Israel conducts regular air raids on Palestinians in Gaza under the pretext of hitting Hamas targets. The Gaza Strip has also been under an inhumane Israeli siege since 2007.

Tel Aviv has waged three wars on the coastal enclave since 2008, including the 2014 offensive, which left more than 2,200 Palestinians dead.

The Israeli Air Force fired, overnight, many missiles targeting fifteen sites in the Gaza Strip, reportedly after several homemade shells were fired from Gaza into nearby Israeli areas.

Media sources in Gaza said that army fired missiles into a site, run by an armed resistance group, believed to be al-Qassam Brigades, the armed wing of Hamas.

The sources said Israeli F16 fighter jets, and armed drones, fired three missiles into the al-Hashashin area, west of Rafah, in the southern part of the Gaza Strip.

The army also fired three missiles into al-Yarmouk and Ein Jalut sites, in southern Gaza, in addition to firing missiles at other targets, including an observation post, east of Gaza city, and two targets in central and northern Gaza.

There have been reports of property damage in the targeted areas, but no casualties.

The army also claimed some Palestinians attempted to breach the border fence, and hurled grenades at military infrastructures, in addition to launching burning kites setting several fields with fire.

The army also said that one if its targets was what it called Hamas naval post, in northern Gaza, and held the movement responsible for the escalation.
2 june 2018
Palestinians injured by settlers and soldiers south of Nablus

Palestinian official Ghassan Daglas, specialist in settlement affairs, said that a horde of Jewish settlers stormed the village and physically assaulted an elderly man called Salim Shehadeh as he was grazing his cattle and wounded him.

Daglas also said that local young men responded to the settlers’ assault and confronted them before Israeli soldiers intervened and attacked them.

He added three young men suffered live and rubber bullet injuries, while another was injured when a settler hit him in the head with an iron rod.

Israeli colonialist settlers invaded, on Saturday evening, ‘Orif Palestinian village, south of the northern West bank city of Nablus, attacked and injured an elderly Palestinian man, and two young men, before the soldiers invaded the village and injured three others.

Media sources in Nablus said the colonialist settlers invaded the village, and attacked Salim Shehada, in his seventies, causing various cuts and bruises, before he was rushed to Rafidia Hospital.

They added that the colonialist settlers also attacked a young man, identified as Bahjat Safadi, and injured him in the pelvis, in addition to striking another Palestinian with an iron bar on his head.

Furthermore, the soldiers attacked many Palestinians, who protested the invasion and assaults, before shooting one of them with a live round in his pelvis, and two others with rubber-coated steel bullets.
Kuwait to go to GA for protection of Palestinians

The Kuwaiti ambassador to the United Nations Mansour Al-Otaibi vowed to go to the General Assembly for the protection of Palestinians after a draft resolution of his delegation for that purpose was vetoed by the United States.

Earlier Friday, the UNSC voted on a Kuwait-drafted resolution calling for setting up an international protection for the Palestinian people following the killing of dozens of peaceful Palestinian protestors by Israeli forces in Gaza.

Out of the council's 15 members, 10 voted in favor, including France, and only the US voted against. There were four abstentions including Britain.

"We will consider going to the General Assembly, going to other UN bodies to try to find a way to provide international protection for the Palestinian civilians," Al-Otaibi told reporters..

Al-Otaibi said he was disappointed by the U.S. veto of his delegation's draft resolution.

Ten of the 15 members of the Security Council voted in favor of the Kuwaiti draft, and only the United States voted against it, he noted.
Israeli Soldiers Shoot A Palestinian In Southern Gaza 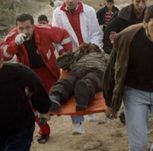 Israeli soldiers shot, on Saturday morning, a young man on Palestinian lands near the border fence, east of Khan Younis, in the southern part of the Gaza Strip.

The Health Ministry in Gaza said the soldiers, stationed behind sand hills, opened fire at the Palestinian, and shot him with a live round in his abdomen.

It added that the young man was rushed to a Palestinian hospital and is currently in a moderate-but-stable condition.

On Friday, the soldiers killed a Palestinian medic, identified as Razan Ashraf Najjar, 21, and injured at least 100 others, including 40 who were shot with live and exploding rounds.

Razan, who was wearing a clearly-marked medic vest, was killed when an Israeli sniper shot her in the back, and the bullet went through her heart.

She was at least 100 meters away from the eastern border fence when she was shot while providing aid to wounded Palestinians and attempting to evacuate them to the field clinic.

Prior to her injury, Razan managed to render aid to many wounded Palestinians, including an elderly man who suffered the effects of teargas inhalation.

A Palestinian child was injured Saturday morning after being shot by the Israeli occupation forces (IOF) east of Khan Younis in the southern Gaza Strip.

The PIC reporter said that the IOF shot a 17-year-old Palestinian in the abdomen while he was standing near the Great Return March camps.

His injury was described as "moderate" and he was transferred to the European Hospital for treatment.

The IOF soldiers every now and then open fire at the Return March camps erected east of the five provinces of the Gaza Strip.