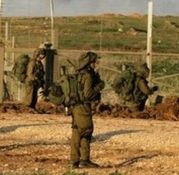 The soldiers fired many live rounds at the farmers, while working on their lands, close to the border fence, east of Khan Younis, forcing them to leave in fear of additional escalation.

A similar attack was carried out against farmers near Sofa area, east of Rafah, in the southern part of the Gaza Strip, while the soldiers also fired flares.

Such attacks are part of daily Israeli violations against Palestinian farmers and workers, in areas close to the border fence, in addition to frequent attacks against fishermen and their boats, in Palestinian territorial waters, in the besieged and impoverished Gaza strip.
Israeli Soldiers Invade Sa’ir, Near Hebron 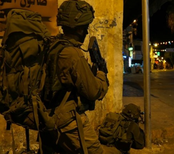 Media sources in Hebron said an army truck apparently entered Sa’ir by accident, before local youths started hurling stones at it, and that the soldier who was driving it, stepped out and started firing live rounds.

The soldier then called for backup, and within minutes, more than 30 army vehicles invaded the town, leading to clashes.

The army said that one soldier was mildly injured.

The Israeli occupation forces (IOF) at daybreak Monday kidnapped the Hamas leader Ra’fat Nasif from his family home in the West Bank.

A PIC news correspondent said the IOF stormed Tulkarem’s southern neighborhood in over 20 military jeeps and cordoned off residential alleys before they ravaged Nasif’s family home and attacked his family members.

Nasif was released one month ago from Israeli jails, where he had spent a total of nearly 20 years.

The campaign targeted other Palestinians from occupied West Bank provinces.

Six Palestinians were kidnapped by the IOF from the southern West Bank province of Bethlehem.

Two ex-prisoners—Mootaz Samih and Jihad Sari—were kidnapped by the IOF from Ramallah’s town of Rentis.

Meanwhile, clashes burst out in Jenin, the northern West Bank, after the occupation army rolled into the city, kidnapped a Palestinian civilian, and wreaked havoc on civilian homes.

The IOF attacked the Palestinian anti-occupation protesters with randomly-unleashed spates of bullet fire and teargas canisters.

The Palestinian youth responded by hurling stones and home-made firebombs on the occupation patrols.

The IOF further raked through Qalqilya on claims that an explosive device was spotted near Eliyahu checkpoint. 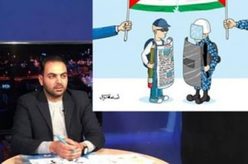 Many Israeli soldiers invaded, on Monday at dawn, the village of Kafr Ni’ma, west of the central West Bank city of Ramallah, before breaking into and searching the home of a Palestinian artist, and confiscated his Caricatures.

The artist, Osama Nazzal, said the soldiers surrounded his family’s home, approximately at 4 at dawn, before invading it and ransacking its property.

Nazzal added that the soldiers damaged many of his drawings, and confiscated all the remaining caricatures, before withdrawing.
Israeli drills force 9 Palestinian families to evict their homes

Israeli Occupation Forces (IOF) handed over eviction notices to nine Palestinian families in al-Ras al-Ahmar hamlet in Northern Jordan Valley in order to evict their homes next Wednesday and Thursday for conducting military drills in the area.

As a result 43 Palestinians, mostly women and children of the hamlet located southwest of Tubas city and surrounded by three Israeli settlements, are going to be homeless for two days.

Israeli occupation forces, on Sunday, started military drills in several areas of the occupied West Bank, according to the Israeli newspaper Israel Hayom.
The drills are set to last until Thursday.

WAFA correspondence reports that, according to the newspaper, an Israeli forces spokesperson said the drills are already planned for, and aim at maintaining the readiness of the Israeli occupation forces.

On Sunday, Israeli forces notified several Palestinian families in the area of Ras al-Ahmar, northeast of Tubas, in the occupied West Bank, to leave their homes on Wednesday to make way for Israeli military training, local sources said.

Aref Daraghmeh, who monitors settlement activities and Israeli violations, said that Israeli forces ordered more than 10 Palestinian families in Ras al-Ahmar to leave their homes on Wednesday, from 5:00 PM until 5:00 AM, in order to make way for Israeli military drills in the area.

Israeli Occupation Forces (IOF) on Sunday raided Joret al-Shama and Marah Mealla towns, south of Bethlehem. The IOF soldiers fired stun grenades at civilians in both towns with no arrests or injuries reported.

WAFA news agency quoted Hassan Braijeyeh, representative of the committee against the separation wall and settlement in Bethlehem, as saying that Israeli occupation authorities have completed construction works of the Separation Wall in the part close to Bethlehem Arab Society Hospital for Rehabilitation in Beit Jala town, west of Bethlehem governorate. It is a four-meter-high barbed wire, the agency elaborated.

Braijeyeh pointed out that completing the Separation Wall in Bethlehem means that the lands of Beir Ouneh and Wadi Ahmad areas northwest of Beit Jala are now completely isolated.

An Israeli court, he recalled, had issued a decision stipulating the suspension of construction works in the Separation Wall in that area.
Israeli army stages five-day drills across West Bank

A round of five-day military maneuvers is expected to be carried out by the Israeli occupation army across the West Bank as of Sunday.

According to the Israel Hayom newspaper, the military drills are to kick off on Sunday and be wrapped up on Thursday.

An Israeli army spokesman said the maneuvers make part of a preplanned scheme allegedly intended to boost the army’s vigilance and preparedness for anticipated anti-occupation attacks.

Eyewitnesses said the events started near the Grand Mosque in Beit Ummar after Israeli soldiers entered the area and embarked on randomly firing stun and tear gas grenades at passersby and homes.

Consequently, local young men confronted the soldiers and responded by hurling stones at them.

During their presence in the town, soldiers raided and ransacked a bakery and a house in the central district, according to a local source.
24 mar 2017
Palestinian youngster’s fingers amputated

A Palestinian young man was injured Friday afternoon after an unknown object exploded in his hand while he was cleaning his house's garden south of Jenin.

Local sources told a PIC reporter that Islam Aliwa, 20, lost 3 of his fingers when a remnant of Israeli occupation forces (IOF) exploded.

Aliwa’s health situation is stable after undergoing a surgery in hospital, the sources added.

Palestinians held the IOF responsible for the incident due to leaving their military remnants close to Palestinian houses in the West Bank during and after military drills in addition to the widespread minefields in the area.
Clashes erupt after the funeral of martyr Hattab in Jalazoun camp

Clashes erupted between Palestinian youths and Israeli Occupation Forces (IOF) in the wake of the funeral of the minor Mohammad Hattab east of al-Jalazoun refugee camp in Ramallah.

Eyewitnesses reported that IOF soldiers fired rubber bullets and tear gas grenades at Palestinian youths who responded by throwing stones amid a state of tension prevailing in the area.

Thousands of Palestinians after the Friday prayer took part in the funeral of the martyr Hattab who was deliberately murdered by Israeli forces while in the company of three of his friends who were seriously injured in the Israeli shooting. The soldiers claimed the youths threw a Molotov cocktail at a military site in Beit El settlement in Ramallah.

The participants chanted angry and anti-occupation slogans and carried the photo of martyr Hattab along with the Palestinian flag.
12 injuries reported in IOF quelling of weekly march east of Ramallah

At least twelve Palestinians were injured while dozens choked on tear gas due to Israeli Occupation Forces (IOF) violent quelling of a peaceful anti-settlement march east of Ramallah.

A medical source affirmed the injury of 12 civilians including 5 injuries with live bullets in the limps. 14 Cases were transferred to hospital for treatment, the source added.

The IOF soldiers quelled the march that kicked off from two towns, al-Meghayyer and Kafr Malik, in protest at the establishment of a new settlement outpost over the lands of both towns, a local source revealed.

Clashes erupted after IOF troops opened their gunfire, using live and rubber bullets in addition to tear gas grenades, at the participants in the march, the source added.

Eyewitnesses pointed out that a number of journalists and photographers choked on tear gas while covering the clashes. The cameraman Naser al-Shuyukhi was among those who were treated for breathing problems.

In the same context, clashes broke out between Palestinian youths and IOF soldiers after Friday prayer in Beit Furik town, east of Nablus city.