Eyewitnesses told the PIC reporter that IOF soldiers prevented the farmers from approaching their lands, with an area estimated at ten dunums, and threatened them with shooting and arrest.

The eyewitnesses pointed out that the farms are located in Area B which is controlled by the Palestinian Authority.

However, the IOF banned the farmers from entering and plowing their agricultural lands disregard the fact that they had earlier coordinated with Israeli occupation authorities for accessing their farms securely.
Army Injures Two Palestinians Near Qalqilia 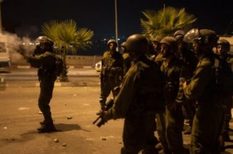 The soldiers invaded the town, before storming into and violently searching Radwan family building.

The soldiers also invaded and searched several homes and detained many young men while interrogating them and investigating their ID cards.

Furthermore, the soldiers took pictures of several homes and buildings in the town.

The army also installed many roadblocks in ‘Azzoun, searched many cars and investigated the ID cards of many Palestinians.
Israeli Soldiers Invade School, Kindergarten And Homes Near Ramallah, Injure Several Palestinians, Abduct Three

Israeli soldiers invaded, on Wednesday morning, the al-Mughayer Palestinian village, east of the central West Bank city of Ramallah, before storming into a school, and a kindergarten, and injured eight, in addition to abducting three young men.

The principal of al-Mughayer Secondary School and member of the village’s Local Council, Marzouq Abu Naim, said the soldiers invaded the local school for girls, and used it as a military post, in addition to the al-Mughayer kindergarten.

He added that the soldiers also invaded and searched many homes in the village, and the local mosque.

The soldiers also fired many gas bombs, causing dozens of Palestinians, including children in the kindergarten, to suffer the effects of teargas inhalation.

As Palestinian children were heading to school on Wednesday morning, Israeli soldiers entered the central occupied West Bank village of al-Mughayyir, in the Ramallah district, injuring eight people with rubber-coated steel bullets while dozens of others, some kindergarten children, were suffered from tear gas inhalation.

The soldiers’ presence prompted confrontations with local youth, who threw rocks while forces fire rubber-coated steel bullets and tear gas, causing many school children to be exposed to the gas on their way to school.

Eight locals were injured by rubber bullets, with one requiring hospitalization for light injuries, according to the Palestinian Ministry of Health.
WAFA reported that undercover Israeli soldiers also raided the local boys’ school, during which they beat 10 students and detained three of them.

Earlier this month, the Palestinian Ministry of Education released a statement saying that in 2017, at least 8,0279 Palestinian students and 4,929 teachers and school employees were subjected to attacks by Israeli forces.

According to the report, nine students were killed, while 603 students and 55 teachers and school employees sustained live or rubber bullets wounds during Israeli raids into schools or by being run over by Israeli military jeeps, while dozens of students suffered from suffocation due to inhaling tear gas fired by Israeli forces against them.
Israeli army conducts incursions into Gaza Strip

Israeli military vehicles on Wednesday morning launched incursions into different areas east of the Gaza Strip for the third time in 24 hours.

They added that several Israeli tanks were stationed near Nahal Oz site to provide protection to the bulldozers, while Israeli drones kept hovering over the territory.

A similar incursion was carried out east of Khan Younis city in the southern Gaza Stip. Local sources said that six Israeli bulldozers rolled into Palestinian lands near Kissufim site and leveled them.

These incursions are another chain in the series of Israeli violations of the Cairo-brokered truce deal struck in the wake of the 2014 offensive on the besieged Gaza Strip.
IOF arrests 35 Palestinians in West Bank sweeps

Local sources told the PIC reporter that the IOF stormed different neighborhoods in Nablus city and arrested Mu'taz Okasha after raiding his house. Another Palestinian named Nayef al-Shami was arrested from a bakery he works in.

At the same time, the IOF raided Aqraba town south of Nablus and launched a search campaign against Palestinian citizens' houses for the second day in a row.

The PIC reporter said, quoting local sources from Tulkarem, that the IOF abducted two Palestinian youths after raiding and searching their houses then transferred them to an unknown destination.

Another Palestinian identified as Moayyad al-Qaq was arrested at a checkpoint in Qalqilya while returning from a visit he paid to his detained brother at Megiddo prison.

The Palestinian activist Mohammed Awad reported that an Israeli military force at daybreak arrested three Palestinians and handed two others summonses to appear before the Israeli intelligence for interrogation during a raid into Beit Ummar town in al-Khalil.

Sporadic confrontations broke out between Beit Ummar residents and the IOF soldiers during which the latter heavily fired sound bombs and tear gas canisters. No injuries were reported.

Other arrests were reported in Jericho and Bethlehem, and about 20 Palestinians, including minors, were arrested in Jerusalem campaigns.

Israeli soldiers abducted, on Wednesday at dawn, 27 Palestinians from their homes in several parts of the occupied West Bank, including 20 in Shu’fat refugee camp, east of occupied Jerusalem.

The soldiers invaded and violently searched dozens of homes and interrogated many Palestinians before abducting the 27 young men.

The Palestinian Prisoners’ Society (PPS) said the abducted Palestinians have been identified as:

Yousef Deeriyya, a member of the Popular Committee against the Annexation Wall and Colonies, said the soldiers did not inform the Palestinians about the drills, or even the period they would take.

He added that the army considers the area as a “military zone” meant for live fire training, and frequently carries out drills among the homes, and on Palestinian lands, especially during night hours.

Deeriyya further stated that the soldiers conduct frequent training in the area, and leave massive destruction before they withdraw, to force the Palestinians to leave their lands.

In January, the soldiers shot a Palestinian child with a live round in the head, during “military training” near Tubas, in northeastern West Bank.

In several incidents, many Palestinians, including children, were injured and even killed, when explosives dropped by the soldiers during training went off near them.
Israeli Soldiers Fire At Farmers, Invades Lands, In The Gaza Strip

Israeli soldiers fired, on Tuesday morning, many live rounds at Palestinian farmers, east of Khan Younis, in the southern part of the Gaza Strip, and invaded farmlands in the area, in addition Beit Hanoun, to the northern part of the coastal region.

Eyewitnesses said the soldiers, driving an armored military jeep across the border fence, exited their vehicles, and fired many live rounds at the farmers, in the Sanati and al-Qarara areas, east of Khan Younis, forcing the Palestinians to leave their lands in fear of further escalation.

Israeli soldiers fired, on Tuesday morning, several gas bombs at schoolchildren, heading to their schools, in the al-Lubban ash-Sharqiya village, south of the northern West Bank city of Nablus.

The children were walking to their schools by the main Nablus-Ramallah road, before the soldiers started firing gas bombs, concussion grenades and rubber-coated steel bullets, and attempted to prevent them from reaching their educational facilities.

Medical sources said many students suffered the effects of teargas inhalation and received the needed treatment.

The soldiers also installed a military roadblock at the entrance of the village, and interrogated many Palestinians, especially schoolchildren.

Furthermore, the soldiers detained a young man from the village, and assaulted him before attempting to abduct him, but the locals managed to take him away.
Israeli army continues to destroy agricultural lands in Aqaba village

The Israeli occupation army on Monday continued to carry out military drills in the mountainous area of al-Aqaba village in the northern Jordan Valley, destroying cultivated fields belonging to Palestinian farmers.

He added that the Israeli army had been conducting drills for days in their area and its troops deliberately caused widespread damage to rain-fed crops.
19 mar 2018
IOF closes entrance to al-Lebban al-Sharqiya town in Nablus

Israeli occupation forces (IOF) on Monday evening shut down the entrance to al-Lebban al-Sharqiya town south of Nablus city and banned the inhabitants from entering or getting out of the town.

A local sources said that IOF soldiers fired sound bobs at the Palestinian cars in an attempt to make them return back to their homes.

Clashes then erupted in the town between the inhabitants and IOF troopers who fired tear gas grenades at the protesters. Many of the residents suffered from suffocation as a result.
Army Fires Gas Bombs At A School Near Bethlehem

Israeli soldiers attacked, on Monday morning, many schoolchildren with gas bombs, in a secondary school in Teqoua’ town, east of the West Bank city of Bethlehem.

Media sources said the soldiers fired at least ten gas bombs into the school, an issue that forced the administration to close all its outer gates, to prevent the army from invading it.

The school’s administration said the military’s constant presence in front of the school is causing more tension, endangering the lives of the students and threatening the flow of the educational process.

The soldiers constantly provoke the students, and search them, in addition to installing roadblocks near the school.
18 mar 2018
Israeli army launches limited incursion into blockaded Gaza

Israeli army vehicles and patrols showed up on the borderland to escort the bulldozers.
Israeli army launches multiple aerial attacks on Gaza

PIC reporters said there were intensive overflights in different areas of Gaza, adding that the resistance opened anti-aircraft fire at the warplanes.