Two Palestinians were injured, on late Thursday, after an Israeli warplane fired a missile towards protesters known as “Night Confusion” unit, east of Rafah, in the southern besieged Gaza Strip.

Medical sources confirmed that two Palestinians suffered minor and moderate injuries after a missile was fired by an Israeli warplane. They were transferred to the European Hospital to receive necessary medical treatment.

The identity and medical condition of the injured remained unknown.

Hundreds of Palestinians gathered along the eastern borders of Gaza and ignited dozens of rubber tires on fire near the security border fence with Israel.
Israeli Airstrike Injures Seven Palestinians In Gaza 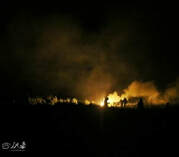 An Israeli military drone fired, on Thursday evening, a missile at several Palestinians, east of Rafah, in the southern part of the Gaza Strip.

Media sources has reported that the Palestinians were protesting on Palestinian lands near the  perimeter fence, east of Rafah.

They added that seven Palestinians were injured and were rushed  to several hospitals.

In related news, the Israeli army said it “fired a tank shell at a Hamas post,” in southern Gaza, and claimed that it was “retaliating to flammable balloons launched from Gaza.”

A Palestinian teenager suffered a bullet injury when an Israeli soldier opened fire at him on Thursday afternoon during his presence in a border area in the east of the besieged Gaza Strip.

A reporter for the Palestinian Information Center (PIC) said that a 16-year-old boy was shot in one of his legs during his presence in the east of al-Bureij refugee camp in central Gaza.

He added  that the boy was rushed to al-Aqsa Martyrs Hospital in Deir al-Balah.
Israeli Airstrike Targets Protesters In Central Gaza

An Israeli military drone fired, on Wednesday at night, a missile at young Palestinian protesters in the Central District of the Gaza Strip.

Eyewitnesses said the drone fire a missile at the young men, east of the al-Boreij refugee camp, and added that the missile detonated close to the protesters but did not lead to casualties.

On its part, the Israeli army claimed its missile targeted Palestinians “flying flammable balloons” into nearby Israeli areas.

It is worth mentioning that dozens of Palestinian youngsters held the protest at night, along the perimeter area across the eastern part of the Gaza Strip.

On Wednesday evening, the soldiers executed a young man, who stepped out of his car and tried to provide aid to a Palestinian, who was shot and seriously injured by the soldiers in his car, while his wife and children were also in the vehicle.

The slain young man, identified as Ahmad Jamal Mahmoud Manasra, 26, was driving behind another Palestinian car, when the soldiers shot and seriously injured the driver, who was with his wife and children.

On Tuesday at night, the soldiers killed a young Palestinian man, identified as Omar Abu Laila, 19, who is suspected of killing two Israelis, last Sunday; the Palestinian was killed after the soldiers surrounded a home, and exchanged fire with him in Abwein village, near the central West Bank city of Ramallah.
Birzeit Students Retaliate over West Bank Killings

Students burn tires at Ramallah’s northern entrance during a protest against the Israeli army killing of three Palestinians.

Several dozen Birzeit University students demonstrated today, at Ramallah’s northern border, near an Israeli army checkpoint, in protest against the army’s killing of three young Palestinians near Ramallah and in Nablus, the night before.

Soldiers fired teargas and rubber-coated metal bullets at the students, injuring three, while others suffered from tear gas inhalation.

Soldiers deployed, at the hills near the checkpoint, also fired sound bombs towards journalists covering the event, forcing them to leave the area.

Soldiers, last night, killed Omar Abu Laila, 19, in the Ramallah area village of Obwin, after claiming he was behind the killing of an Israeli soldier and a settler, earlier in the week, near the illegal settlement of Ariel, in the northern occupied West Bank.

Hours later, soldiers shot and killed Raed Hamdan, 21, and Zeid Nouri, 20, in Nablus, after opening fire on their car. Hamdan and Nouri were buried today, in Nablus, in a funeral attended by thousands, and with a shuttered city.
20 mar 2019
Israeli Soldiers Injure Several Palestinians In Hebron

Israeli soldiers injured, Wednesday, several Palestinians at the entrance of the al-‘Arroub College, north of Hebron, in the southern part of the occupied West Bank.

The soldiers invaded the area, before stopping and searching dozens of residents and cars.

The soldiers also interrogated many students while inspecting their ID cards and blocked the main Hebron-Jerusalem road.

According to the news agency, the strike caused partial damages in the place and no injuries.

Meanwhile in Rafah, south of Gaza, an Israeli drone attacked Palestinians taking part in the Great March of Return's night protests and flying fire balloons toward the Israeli settlements neighboring the border. No one was injured.

The Palestinians in the Gaza Strip on 30 March 2018 started weekly protests along the border between the seaside area and the 1948 occupied Palestinian territories to demand the Palestinian refugees' right of return and pressure Israel to break the blockade.

Since the start of the border protests, the Palestinians have launched dozens of fire kites and balloons over the border fence, burning thousands of dunums of settler lands and inflicting heavy losses on the Israeli occupation.

The Israeli occupation army on Tuesday evening bombed a Palestinian farmland in Gaza.

Local sources said that an Israeli drone attacked a farmland east of Gaza city with two missiles. No injuries were reported.

A spokesman for the Israeli army said that the air raid targeted a group of Palestinians flying fire balloons toward Israeli settlements neighboring the Gaza border.
13 Palestinians injured by Israeli gunfire in Gaza protests

Hundreds of Palestinians gathered on Tuesday to take part in the Great March of Return's coast protests north of Gaza.

Medical sources reported that 13 Palestinians were injured including a journalist hit directly with a tear gas canister in the head.

A representative of the Great March of Return activists, speaking during the protests, affirmed that the night demonstrations will be resumed starting Tuesday.

Khader Habib, a member of the Higher National Committee for the Great March of Return and Breaking the Siege, said that the border protests will continue until they achieve their goals and break the blockade.

"We will fight the occupation with our simple weapons, and we will never wave the white flag," he stressed.

A few months ago, Gaza coast protests became a major part of the Great March of Return which was launched on 30 March 2018.

Since the start of the border protests, the Israeli occupation army has killed 271 Palestinians, and injured 29,000 others, about 500 of whom are in critical condition.
4 Palestinians shot, injured in Gaza's night protests

Four Palestinians were shot and injured with Israeli live ammunition during “Night Confusion” protests along the eastern borders of the besieged Gaza Strip, on late Monday.

Medical sources confirmed that one Palestinian was shot and injured in his foot, in Khan Younis, in southern Gaza. His medical condition was described as moderate.

Sources also confirmed that another Palestinian was shot and injured by Israeli forces in Rafah, in southern Gaza, while two other Palestinians were injured east of Jabaliya, in northern Gaza.

Hundreds of Palestinians gathered along the eastern borders of Gaza to protest against the nearly 12-year Israeli siege.

Sources added that protesters ignited a number of rubber tires on fire near the security border fence with Israel and threw rocks at Israeli forces.