Official says IDF given 'the last word'; remarks come shortly after Netanyahu lands in Israel from Washington; urgent security meeting to be convened within next hour

A senior source in Jerusalem on Tuesday dismissed claims by Palestinian officials that a ceasefire has been reached between Israel and Hamas, warning that the Jewish state was planning further strikes on the terror group that rules the Gaza Strip.

"There is no agreement regarding a ceasefire, we are prepared to strike with even harder blows," the source said.

The remarks were made shortly after Prime Minister Benjamin Netanyahu landed in Israel after cutting short his trip to Washington following a meeting with President Donald Trump. Netanyahu was to convene a security meeting at Defense Ministry HQ in Tel Aviv shorty after landing.

"The prime minister has been updated on the latest developments during the flight and was in constant contact with the IDF chief of staff." the source said. "The instruction was to continue the strikes, the last word has to remain with Israel. Hamas has made various proposals for a ceasefire through intermediaries, and even offered to stop the clashes on the Gaza border," the source added.

Meanwhile, Hamas said they are cancelling all demonstrations along the security fence in light of “the security situation.”

During the meeting with Trump on Monday, Netanyahu said Israel would "respond forcefully to this wanton aggression," adding that, "after this meeting, I will return home ahead of schedule to lead the people of Israel and the soldiers of Israel."

Gaza militants fired at least 100 rockets into southern Israel and Israeli aircraft carried out hundreds of strikes in the Hamas-ruled territory late Monday and early Tuesday, in the latest round of cross-border fighting between the two sides.

The latest round of violence began early Monday when seven Israelis, including an infant, were wounded when a house in a moshav northeast of Tel Aviv was directly hit by a long-range rocket fired from Gaza by what the IDF said were Hamas operatives.

The Israeli military said it was a self-manufactured rocket with a range of 120 kilometers (75 miles), making it one of the deepest strikes ever carried out by Hamas.
Latest Israeli Bombing On Gaza Destroyed 30 Residential Units, And Caused Damage To 500

Palestinian Labor Minister Mofeed al-Hasaina has reported, Tuesday, that the Israeli bombing on Gaza, which started on Monday evening, has destroyed 30 civilian residential units, and caused damage to 500 others.

In a press briefing, al-Hasaina said that engineers and workers of the Labor Ministry have started since morning hours, Tuesday, assessing the damage caused by extensive Israeli bombings on Gaza.

He added that the teams started reopening roads that were closed by debris of bombed homes, and buildings.

Al-Hasaina also stated that the Ministry is conducting all needed efforts, including coordination with international institutions, to ease the suffering of the Palestinian people in the besieged and impoverished Gaza Strip.

Ad-Dameer added that this latest escalation is the most violent since Israel’s offensive on the Gaza Strip in the summer of 2014, and called on the International Community to end its silence and intervene to end these serious crimes against the civilian population.

It stated that the Israeli army started its latest offensive of the Gaza Strip on Monday evening, March 25th, 2019, by carrying out more than 50 air strikes, targeting not only sites used by army resistance groups, but also dozens of civilian homes, apartment and commercial buildings, in addition to agricultural lands and structures, causing serious damage and dozens of injuries.
Two Palestinians injured by Israeli gunfire in Ramallah

Two Palestinian youths were injured on Tuesday evening during confrontations with the Israeli occupation forces (IOF) in Jalazone refugee camp in the West Bank province of Ramallah.

Eyewitnesses said that violent clashes broke out as the IOF stormed the camp and heavily fired rubber-coated metal bullets, stun grenades, and tear gas canisters at the Palestinians.

Activist Mahmoud Mubarak said that the IOF soldiers have been stationed near the camp carrying out search campaigns since late Monday.

The Palestinian Center for Human Rights (PCHR) said that the recent Israeli air raids on the besieged Gaza Strip displaced 13 Palestinian families of 70 individuals, including 44 children and 14 women.

According to the Center , those families spent their night outdoors in the cold.

Tentative clam has been reigning over the besieged Gaza Strip after the Israeli occupation army continued to attack Gaza last night and at dawn Tuesday despite the ceasefire that was announced by Egypt and UN.

According to the government media center in Gaza, 50 airstrikes in total were waged on Monday and Tuesday by Israeli warplanes on apartment buildings, civilian facilities, agricultural plots of land and resistance sites.

The Omar Ibn Abdul-Aziz Mosque in Beit Hanoun also went up in flames following an airstrike.
Israel continues to attack Gaza despite Egyptian-brokered ceasefire
operations room, that they would respect the ceasefire as long as the Israeli side did not violate it.

Earlier on Monday, five hours of Israeli aerial attacks caused widespread destruction in civilian areas and to infrastructure belonging to the resistance, and wounded many citizens.

Egypt has brokered late Monday a cease-fire to stop the latest Israeli airstrikes on Gaza Strike.

The ceasefire was reached after several Israeli airstrikes were fired across Gaza earlier Monday, targeting resistance sites and civilian homes.

Several injuries were reported during the airstrikes.
Israeli Airstrikes Injure 8 Palestinians, Including Two Children In Gaza

The Israeli Air Force carried out, on Monday at night, a series of air strikes targeting several areas, including homes, in many parts of the besieged Gaza Strip, wounding eight Palestinians, including two children.

Media sources said the army fired two missiles into a commercial building, in the center of Gaza city, wounding two Palestinians, and causing excessive damage to the property and surrounding homes.

The army also fired a missile at a residential building in the Rimal neighborhood, in Gaza city, wounding two children, and causing excessive damage to the building and some surrounding homes.

At least one Palestinian was also injured when the army fired missiles into a building, east of the Sheja’eyya neighborhood, east of Gaza city.

The army also fired two missiles into two sites, west of Gaza city, and in Beit Lahia, in the northern part of the Gaza Strip, causing damage, in addition to several missiles striking Palestinian lands east of Khan Younis and Rafah, in the southern parts of the coastal region.

Medical sources said four Palestinians were injured by Israeli missiles in Beit Lahia and Jabalia, in northern Gaza, and were rushed to the Indonesian Hospital

The Maan News Agency has reported that the army fired more than 100 missiles into various areas in the Gaza Strip.

It added that all schools, universities, banks and various institutions have decided to close their doors, to avoid civilian casualties should the situation witness a further deterioration.

Among the targeted buildings are offices of Ismael Haniyya, the political leader of Hamas movement.

Israeli daily Haaretz has reported that the army launched an offensive striking what it called “Hamas targets” in the Gaza Strip after a shell was reportedly fired from Gaza.

Haaretz also quoted the army claiming that Palestinian fighters fired 30 shells from Gaza, before 10 at night, and added that the Iron Dome missile interception system managed to shoot down some of them while the rest landed in open areas.

Although armed resistance groups in Gaza have jointly announced a ceasefire under Egyptian mediation, and their willingness to stop the firing of shells if Israel stops bombing Gaza, Israeli sources have not confirmed such an agreement was officially reached.

Haaretz stated that shells were fired from Gaza into Sderot in the Negev after the reported ceasefire went into effect and added that one home was hit causing damage but no injuries.
Israeli warplanes target Haneyya’s office

No initial casualties were reported during the attack.

Earlier Monday, Haneyya said in a press release that the Palestinian people “will not surrender” and the resistance factions “will deter the enemy if it exceeds the red lines.”

The Israeli occupation army on Monday intensified the presence of its forces along the border of the besieged Gaza Strip as a prelude to launching military aggression.

According to the Hebrew media, the Israeli army deployed two infantry and armored brigades to southern Israel and has begun a limited call up for reservists in the intelligence and air forces following rocket fire on central Israel Monday morning.

A senior Israeli officer accused Hamas of firing a rocket from Rafah in the southern part of Gaza, pointing out that it had a range of 120 kilometers.
Israeli artillery attack two sites in Gaza

The Israeli occupation artillery bombed on Sunday evening two sites in the north and east of the besieged Gaza Strip.

Local sources told a reporter for the Palestinian Information Center (PIC) that Israeli tanks shelled an observation post in the east of Beit Hanoun, north of Gaza, causing material damage to the place.

The Palestinian Red Crescent said that one of its ambulance sustained considerable damage in the Israeli artillery attack.

Later, an Israeli tank targeted a field control post in the east of Juhor ad-Dik town, south of Gaza City.

The Israeli occupation army said its tanks bombed two military posts belonging to Hamas in the north and east of Gaza, claiming that its attacks were in response to the launch of balloons carrying incendiary and explosive materials towards Israeli areas.

On the same day at dawn, two Israeli airstrikes targeted an observation post in the east of Rafah. 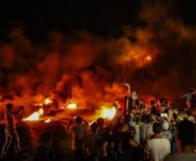 Israeli soldiers injured, on Sunday evening, two Palestinians, and caused many others to suffer the effects of teargas inhalation, in several areas in the eastern parts of the besieged Gaza Strip.

Medical sources said the soldiers fired many live rounds at Palestinian protesters, wounding two, before they were rushed to a hospital.

The sources added that several Palestinians suffered the effects of teargas inhalation, and many others suffered cuts and bruises.

In addition, the army fired a tank shell into Palestinian lands east of Rafah, in the southern part of the Gaza Strip, and another shell into an area east of Juhr ad-Deek, southeast of Gaza city, causing damage.