An Israeli military aircraft on Thursday evening targeted a group of Palestinian citizens in the northeast of the Gaza Strip and injured three of them.

A reporter for the Palestinian Information Center (PIC) said that an Israeli drone fired one missile at citizens in the east of Jabalia, causing injuries to three of them.

The wounded citizens were rushed to a hospital for medical assistance.

A spokesperson for the Israeli occupation army claimed the drone attacked Palestinians as they were intending to launch incendiary balloons from northern Gaza towards Israel.
Army Abducts Two Palestinians, Attacks Protesters In Hebron 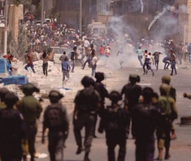 Israeli soldiers abducted, late on Wednesday at night, two Palestinians, and injured many others, after the army invaded several areas in the Hebron governorate, in southern West Bank.

They added that the soldiers also invaded and searched at least one home in Halhoul city, north of Hebron.

The soldiers also abducted Ahmad Fathi as-Sous, 17, from the al-Fawwar refugee camp, south of Hebron, after the army closed the iron gate at the entrance of the refugee camp, and prevented the Palestinians from entering or leaving it.

Israeli soldiers, today, attacked Palestinian school children while they were leaving their school, in the Israeli-controlled part of the southern West Bank city of Hebron, reported WAFA correspondence.

They said that soldiers threw stun grenades at Hebron Elementary School for Boys and harassed the students in the street, after they left the school, causing panic and fear among the children, as well as suffocation from the gas.

Previously, Palestinian children going to or leaving their schools in the Israeli–controlled area of Hebron, known as H2, were accompanied by members of the Temporary International Presence in Hebron (TIPH), an international civilian monitoring force, until Israel canceled their mandate, in February,  and kicked them out of the West Bank after 22 years of service.

As a result, Israeli settlers and army harassment of Palestinian school children has become rampant.
Egyptian officials arrive in Gaza to negotiate truce, while Israel sends more troops to border
rubble on Monday night by Israeli bombs dropped by F16 fighter jets, made his first public appearance since the attack, on Wednesday evening. He said that the Palestinian resistance had made clear their intentions for peace, and that “The Occupying Power [Israel] has heard the message.” Now, he said, it is up to Israel to decide if they will go the way of war or peace.

The Egyptian officials are scheduled to be in Gaza overnight until Thursday. Israeli bombings, drone strikes, sound bombs and other weapons continue to be dropped on the Gaza Strip by the Israeli airforce.

The negotiators are from the Egyptian General Intelligence Service. They are said to have met with Israeli officials on Monday night, and had claimed at that time that a ceasefire was imminent – but Israeli bombardment continued without abatement through Tuesday and continuing into Wednesday.

On Friday, the weekly non-violent protest at the border between Gaza and Israel is scheduled to take place, and then on Saturday, Palestinians across Gaza, the West Bank and around the world will commemorate Palestinian Land Day with massive protests against Israeli land confiscation, imprisonment of the Gaza Strip and illegal and wanton use of military force against civilian populations.

Palestinian Land Day marks the anniversary of a non-violent protest in 1976, following the Israeli government’s seizure of thousands of acres of Palestinian land to annex for the Jewish state.

At that time, protests against the land confiscation were also met by deadly force imposed by the Israeli police, who killed six unarmed Palestinian protesters.

Since the Great March of Return began on March 30th, 2019, over 240 Palestinians have been killed, and over 28,000 wounded by Israeli forces.

According to Hebrew-language news outlets, after consulting with Israeli security officials, Netanyahu decided to send deploy reinforcement forces, including reservist soldiers, and artillery battalion to the Gaza borders.

Sources pointed out that the number of reinforcements forces would be tripled, in addition to a large number of additional military vehicles, bulldozers, warplanes, autopilot aircrafts, and air ambulances.

Earlier this week, Netanyahu was due to appear in person at the AIPAC, the largest pro-Israel lobby in the US, conference in Washington, however, cut his trip short to deal with recent escalation in Gaza, during which seven Palestinians were injured, 13 families were left homeless, and 30 buildings were completely destroyed.

In satellite address from Tel Aviv City, in central Israel, Netanyahu told the annual conference of AIPAC that Israel will "do whatever is necessary to defend our people and to defend our state."
Gaza: IOF teargases civilians, enters border area to bulldoze land

The Israeli occupation forces (IOF) on Thursday morning fired tear gas grenades at Palestinian workmen in the southeast of the besieged Gaza Strip as military bulldozers infiltrated into the area.

According to local sources, six armored bulldozers came from a military post behind the border fence in the east of Rafah and entered a border area inside Gaza to level raised plots of land.

During the incursion, Israeli soldiers launched a teargas attack on Gazan workmen collecting aggregate in the east of Rafah, particularly near the Israeli military post of Sofa.
Young man injured by Israeli gunfire in Gaza night protest

A Palestinian young man on Wednesday evening suffered a bullet injury during his participation in a nighttime protest staged in the east of Jabalia, north of the besieged Gaza Strip.

The health ministry in Gaza said that a young man was wounded by Israeli gunfire in east of Jabalia.

Many others also suffered from their exposure to tear gas fumes.

A group of Gazan young men last night managed to reach the security fence on the eastern border of Jabalia, where they set off fireworks, flashed laser beams at Israeli military posts and chanted national slogans.

A Palestinian youth was injured on Wednesday evening after being shot by the Israeli occupation forces (IOF) near Gaza border.

Eyewitnesses said that an IOF sniper shot a Palestinian youth in the leg east of al-Bureij refugee camp in the middle area of the Gaza Strip.

The injured young man was transferred to a local hospital for treatment and his injury was described as moderate.
27 mar 2019
Israeli forces shoot, injure 8 Palestinians in Birzeit protest

Eight Palestinians were shot and injured as Israeli forces suppressed a peaceful march in solidarity with Palestinians prisoners, in front of Birzeit University, in the central occupied West Bank district of Ramallah, on Wednesday.

Sources confirmed that eight Palestinians were shot and injured with rubber-coated steel bullets, while dozens of others, including a WAFA photojournalist, suffered from tear-gas inhalation.

Palestinian protesters managed to ignite an Israeli military jeep on fire after throwing a Molotov cocktail towards it, forcing Israeli soldiers to abandon the vehicle.

No injuries were reported among Israeli soldiers.

At least six Palestinians were injured on Wednesday by Israeli gunfire in al-Bireh city in the occupied West Bank.

The Quds Press reporter said that violent clashes broke out between the Israeli occupation forces (IOF) and students from Birzeit University who were demonstrating in solidarity with the Palestinian prisoners in Israeli jails.

The protests also came in response to Tuesday's events when a force of undercover Israeli soldiers broke into Birzeit University and kidnapped three students.

The Palestinian Red Crescent Society said in a statement that three Palestinians were injured by rubber-coated metal bullets, two by tear gas canisters, and one by live fire.
Israeli warplanes wage dawn raids on Gaza

Israeli warplanes resumed its attacks at dawn Wednesday on the besieged Gaza Strip, amid efforts to solidify a ceasefire between the two sides.

According to local sources, airstrikes targeted several resistance sites at dawn in southern Gaza, with no reported casualties.

Several civilian homes and structures in the east of Rafah reportedly sustained damage after three missiles fired by a warplane destroyed a resistance site in ash-Shawka area.

Rafah city in Gaza was also plunged into darkness after the electricity network feeding the area sustained damage in aerial attacks.

Another resistance site in the east of Khan Younis was also destroyed in an Israeli air raid.
Israeli Gas Bomb Causes Fire In A Home In Tubas

The head of Tubas Department of Civil Defense, Hilal Hammad, stated that the soldiers fired many gas bombs at protesters and many surrounding homes.

He added that one of the bombs smashed the window of a room, rented by Hamada Abu Nasiriya, in a home owned by Mohammad Rayeq Daraghma, and caused fire in the furniture.

Firefighters rushed to the scene and extinguished the fire before it spread to the rest of the property.
Israeli Soldiers Abduct Three Palestinians, Injure Five, In Deheishe

Dozens of Israeli soldiers invaded, on Wednesday at dawn, the Deheishe refugee camp, south of Bethlehem in the occupied West Bank, shot five Palestinians, including a medic, and abducted three others.

Media sources said the soldiers fired many live rounds, rubber-coated steel bullets, gas bombs, and concussion grenades at dozens of youngsters, who protested the invasion and hurled stones at the armored vehicles.

They added that four Palestinians were shot with live fire before they were rushed to medical centers in Bethlehem, while many others suffered the effects of teargas inhalation.

The soldiers also shot a medic, identified as Sajed Mizher, while providing treatment to wounding Palestinians.

One of the Palestinians was shot with a live round in the abdomen and was rushed to surgery at the Arab Society Hospital for Rehabilitation, a second Palestinian was shot in the shoulder, a third in the thigh and the fourth in the arm.

The soldiers also invaded and ransacked many homes in the refugee camp and occupied several rooftops to use them as firing posts and monitoring towers.

A reporter for the Palestinian Information Center (PIC) that an Israeli warplane bombed the new seaport in the west of Khan Younis.

He also said that Israeli warplanes waged several airstrikes on resistance sites in the east of Khan Younis, especially al-Yarmouk site, adding that the attacks caused widespread panic among the civilians in Gaza.
Palestinian Youth Shot at Gaza Border

A Palestinian youth was shot and injured, by Israeli fire, to the east of al-Bureij refugee camp, in the central Gaza Strip, said medical sources.