Medical sources have reported, Friday, that several Palestinians suffered the severe effects of teargas inhalation, during clashes that took place, in Bab az-Zawiya area, in the center of the city.

The sources said local medics rushed to the area of clashes and provided the needed treatment to the wounded Palestinians.

The clashes took place after the soldiers attacked protesters marching from the al-Hussein mosque, in Ein Sarah Street, heading towards the tent that was installed in solidarity with the hunger striking detainees in Israeli prisons.

They marched carrying Palestinian flags and enlarged pictures of the detainees, in addition to posters expressing solidarity with them, and calling for the liberation of Palestine.

The soldiers invaded the village and attacked dozens of protesters, and fired live rounds at them, wounding five, in addition to injuring three others with rubber-coated steel bullets and causing dozens to suffer the severe effects of teargas inhalation.

Clashes took place near the main entrance of the town after the soldiers used excessive force against nonviolent protesters, marching in solidarity with the hunger striking Palestinian detainees.

Medical sources in Nabi Saleh said all wounded Palestinians, who were shot with live army fire, are from Deir Ghassana nearby town.

It is worth mentioning that the soldiers closed, several days ago, the main gate of the village, blocking the road leading to Ramallah and nearby towns, an issue that prevented ambulances from entering it, which forced the Palestinians to use unpaved dirt roads, using their private cars, to move the wounded to hospitals in Salfit governorate, which are relatively far from Ramallah.
Arrests, clashes in West Bank sweep by Israeli forces

A number of Palestinians were kidnapped by the Israeli occupation forces (IOF) at dawn Friday in abduction sweeps launched across the West Bank.

The Israeli occupation army claimed responsibility for the abduction of five Palestinians from the West Bank. The detainees were dragged to an Israeli detention center pending intensive questioning.

17-year-old Palestinian minor Mustafa Jamal al-Badn and Ziad Taleb Khalaf, 21, were further kidnapped by the Israeli soldiers from their homes in Bethlehem’s eastern town of Tekou’.

Israeli soldiers attacked, Friday, hundreds of Palestinians in various parts of the occupied West Bank, , causing dozens of injuries, during processions in solidarity with the hunger striking detainees, held by Israel.

Medical sources in Hebron, in the southern part of the West Bank, have reported that the soldiers shot two young men with live fire in their legs, during clashes that took place in Beit Ummar town, north of the city, after the soldiers used excessive force against dozens of residents marching in solidarity with the detainees.

The head of the Detainees’ Committee in Beit Ummar, Ali Ayyad Awad, said the soldiers fired many live rounds at the protesters, wounding two in their legs.

He added that the procession started following noon prayers, and just before the protesters reached a military roadblock, the soldiers started firing gas bombs, live rounds and concussion grenades.

The soldiers also attacked protesters in Beita town, south of the northern West Bank city of Nablus, wounding twenty-eight Palestinians; eight of them were moved to local hospitals and clinics. Among the wounded are three medics.

In related news, the soldiers attacked the weekly nonviolent protest against the Annexation Wall and colonies in Bil’in village, near Ramallah, and abducted the head of the Local Council Bassem Mansour, and the vice-head Ahmad Abu Rahma.

In a post on his Facebook page, Ahmad said the soldiers released him later,  while Bassel was taken to an unknown destination.

The attack took place after the soldiers assaulted locals, Israeli and international peace activists, marching in solidarity with the detainees, calling for national unity and the release of all detainees, and for ongoing resistance until liberation and independence.

Army Injures Three Palestinians, Including One Journalist, In Kufur Qaddoum

Israeli soldiers attacked, Friday, the weekly protest in Kufur Qaddoum town, east of the northern West Bank governorate of Qalqilia, shot and injured three Palestinians, including a teenager and a photojournalist, while many suffered the effects of teargas inhalation.

The Popular Committee in Kufur Qaddoum said the soldiers assaulted the weekly procession in the town, and fired many rubber-coated steel bullets, gas bombs and concussion grenades, while Local youngsters hurled stones and empty bottles on the invading army vehicles.

It stated that the soldiers shout Nidal Eshteyya, a Palestinian photojournalist working for a Chinese news agency, with a gas bomb in his back.

The committee also said that a child, identified as Sobhi Obeid, 16, was shot with a gas bomb in the head, while a young man with a rubber-coated steel bullet in his leg, and six youngsters suffered the severe effects of teargas inhalation.

Morad Eshteiwy, the media coordinator of the Popular Committee in Kufur Qaddoum, said the protesters marched carrying flags and signs in solidarity with the hunger striking detainees in Israeli prisons.

Kufur Qaddoum holds weekly protests against the Annexation Wall, also demanding the army to reopen the town’s main road that was closed 14 years ago, to enable faster and easier access to colonialist settlers, driving to and from Kedumim illegal colony, built on private Palestinian lands.
4 may 2017
Injuries reported in IOF quelling of peaceful march in Bethlehem

A number of Palestinian activists and journalists were injured on Thursday after Israeli Occupation Forces (IOF) quelled a peaceful march that was organized by Islamic and national factions in Bethlehem city.

The PIC reporter said that the march was organized in solidarity with hunger striking detainees in Israeli jails. The marchers also asks for returning the bodies of martyrs detained by Israeli authorities.

Scores of activists and citizens participated in the event and carried Palestinians flags along with photos of prisoners and martyrs. They chanted slogans in support of the hunger striking detainees.

Israeli soldiers abducted, on Thursday at dawn, at least eight Palestinians, seven of them during extensive and violent searches of homes, and one who was abducted from his work in occupied Jerusalem.

The soldiers also smashed the front door of a home, belonging to Yousef Mohammad Bahar, and ransacked the property after breaking into it, and searched a garage owned by his son, Mohammad.

Also in Hebron, the soldiers invaded homes in Yatta town south of the city, and abducted a former political prisoner, identified as Khalil Hammad Zein, after searching his home, and the home of his brother Zein.

The soldiers also searched a blacksmith’s workshop, owned by Mahmoud Zein, and confiscated several machines, reportedly for being used to manufacture weapons.

In Nablus, in northern West Bank, the soldiers invaded Huwwara town, south of the city, and abducted Waleed Khaled Nimir, after searching his home.

Israeli soldiers shot and seriously injured, Thursday, a young Palestinian man allegedly after attempting to stab Israeli soldiers, near the Ibrahimi Mosque, in Hebron city, in the southern part of the occupied West Bank.

Israeli sources claimed the young Palestinian man attempted to stab the soldiers at a military roadblock, near the mosque.

They added that the young man suffered serious wounds, but did not fall into a coma following his serious injuries, and was moved to Hadassah Ein Karem hospital, in Jerusalem.

The soldiers claimed that the young man, in his twenties, is from Hebron city, and that the soldiers reportedly found a “toy gun and a grenade” in a bag he carried.
3 may 2017
Israeli Soldiers Attack Palestinian Journalists Protesting Near Ofer Prison

On Wednesday, Israeli soldiers used excessive force against Palestinian journalists, marching in solidarity with the hunger striking detainees, and imprisoned journalists, near the Ofer Israeli prison, in Ramallah governorate of the occupied West Bank.

The journalists were expressing their support to the striking detainees, demanding basic rights, and also demanding the release of 28 journalists, who are still held captive by Israel.

The nonviolent procession was organized marking the World Press Freedom Day. The protesters launched balloons carrying the colors of the Palestinian flag.

The soldiers fired many gas bombs and rubber-coated steel bullets at the journalist, causing no injuries, and threatened to use live fire should they continue their protest.

Journalists’ Syndicate head, Nasser Abu Bakr, said the protest was peaceful, sending a message of support to the detainees, including all imprisoned journalists, especially while the world celebrates the Freedom of the Press on this day.

He added that the journalists in occupied Palestine are frequently attacked by Israel, and are repeatedly abducted and imprisoned, due to Israel’s illegal policies of attempting to silence the press.

“Israel is the only country that imprisons journalists under Administrative Detention orders, holding them captive without charges or trial,” he said, “Our duty is to expose the ongoing crimes and escalating violations.”
Four Young Men Suffer Effects Of Teargas Inhalation In Qalqilia

Palestinian medical sources have reported that four young men suffered, on Wednesday morning, the effects of teargas inhalation, after Israeli soldiers invaded Qalqilia, in the northern part of the West Bank.

The Emergency Unit in Qalqilia said the medics provided the needed treatment to four young men, who suffocated after inhaling gas fired by the soldiers, in al-Mrouj area, north of the city.
Army Invades Several Areas In The West Bank 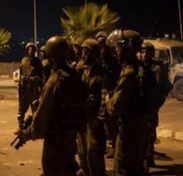 In addition, the soldiers invaded Qalqilia city, in northern West Bank, leading to clashes with local youngsters, who hurled stones and empty bottles on the army vehicles, while the soldiers also invaded homes and stores, and confiscated surveillance tapes after interrogating the families.

The soldiers also fired many gas bombs and concussion grenades, especially near the Red Crescent and Ghayatha area, in Qalqilia.

The soldiers also invaded Kufur Ra’ey, southwest of Jenin, and installed a roadblock, before stopping and searching cars, and interrogated many Palestinians while inspecting their ID cards.
Israeli Army Carries Out A Limited Invasion Into Southern Gaza

Several armored Israeli military vehicles, including bulldozers, carried out on Wednesday morning, a limited invasion into Palestinian lands in al-Fakhari town, east of Khan Younis, in the southern part of the Gaza Strip.

Eyewitnesses said the invasion was carried out by several tanks and four armored bulldozers, while military drones hovered overhead.

Israeli soldiers invaded, on Sunday at night, Sebastia town, northwest of Nablus, in the northern part of the occupied West Bank, and fired many gas bombs and concussion grenades at a solidarity tent, in support of the hunger striking detainees, causing it to burn.

Media sources in Nablus said many army jeeps invaded the town, and directly headed toward the solidarity tent, were hundreds of Palestinians gather daily in a vigil for the detainees, ongoing with the hunger strike they started two weeks ago, demanding basic rights.

They added that the Israeli attack did not lead to casualties, but caused a massive fire in the tent.