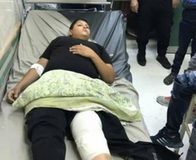 Israeli soldiers invaded, on Sunday at dawn, the Jenin refugee camp, in the northern West bank city of Jenin, shot and injured two Palestinians, and abducted three others.

The soldiers stormed and ransacked homes during the invasion, and interrogated many Palestinians, before abducting three, identified as Mohammad Mahmoud ‘Ararawi, 17, Yassin Ali ‘Ammouri, 18, and Mohammad Mustafa Abu Jilda, 18.

The invasion led to clashes between the soldiers and local youngsters, who hurled empty bottles and stones at the military vehicles, while the soldiers fired many live rounds, rubber-coated steel bullets, and gas bombs.

Israeli soldiers invaded, on Sunday morning, the Jenin refugee camp, in the northern West Bank governorate of Jenin, shot and injured one Palestinian, and caused many so suffer the effects of teargas inhalation, before abducting a young man.

The soldiers broke into and ransacked many homes in the refugee camp, and harassed several Palestinians, leading to clashes.

One Palestinians, Yazan Mohammad Ja’aysa, 20, was shot with a live round fired by the soldiers, while many Palestinians suffered the severe effects of teargas inhalation.

Medical sources said Ja’aysa was shot with a live round in his leg and is currently in a moderate-but-stable condition. He was moved to the Jenin governmental hospital for treatment.

Furthermore, the soldiers assaulted Yassin al-‘Ammouri, and his family, while searching and ransacking the property, and abducted him.
Israeli Army Carries Out A Limited Invasion Into Central Gaza

Israeli soldiers carried out, on Sunday morning, a limited invasion into Palestinian lands, close to the border fence in central Gaza, and uprooted them.

Media sources in Gaza said the invasion was carried out by several army vehicles, including four armored bulldozers, that were stationed in Kissufim military base, across the border fence.

They added that the army advanced approximately 50 meters into the lands, and uprooted sections close to the fence, while military drones flew overhead.
13 may 2017
Israeli policeman runs over Palestinian child

An Israeli policeman ran over a Palestinian child near Bab el-Amoud in Occupied Jerusalem on Saturday afternoon then fled the scene.

Eyewitnesses said that the Israeli policeman was driving his car at high speed and hit the child before fleeing the area, leaving the child injured on the street.

They said that citizens called an ambulance that took the child to hospital without knowing how bad was his injury.
12 may 2017
IOF kills Palestinian youth, injures dozens while quelling marches

A 20-year-old Palestinian youth, Sabi Ubaid, was killed on Friday afternoon by Israeli Occupation Forces (IOF) in Nabi Saleh town northwest of Ramallah. Dozens of others were injured and suffered suffocation in clashes that erupted with IOF soldiers in different flashpoints in the West Bank.

The Palestinian Ministry of Health said that the martyr was shot in the chest with a live bullet that pierced his heart. The attempts to save his life had failed, the ministry added.

The clashes erupted due to popular anger after Palestinian prisoners in Israeli jails had entered day 26 of their open-ended hunger strike. The clashes broke out in the vicinity of Ofer jail in Ramallah and in each of Beita and Beit Forik towns south and east of Nablus respectively.

Palestinian families also performed Friday prayer near the solidarity tent which has been held in Qalqilya downtown for the fourth week in a row.

Jenin city along with Yabad and Silat al-Thahr towns witnessed many solidarity sit-ins and events organized by Islamic and national factions as well as pro-Palestinian prisoners committees.

The people in Deir Istiya town north of Salfit also challenged IOF soldiers and performed the Friday prayer in the streets in protest at the closure of agricultural roads in the town. The IOF troops tried to prevent the solidarity event, but the inhabitants managed to continue the prayer while Israeli soldiers were besieging them.
Army Attacks Nonviolent Protesters In Hebron, Abduct A Man From A Wedding

On Friday evening, the soldiers attacked a wedding celebration in Hebron, and abducted a young man.

Media sources in Hebron said the soldiers fired many gas bombs at the protesters, marching in solidarity with the detainees in Beit Ummar town, causing many Palestinians to suffer the effects of teargas inhalation.

The sources added that the soldiers used excessive force against the protesters, and assaulted many of them.

In Hebron city, the soldiers attacked a wedding celebration in Um ad-Daya area, in the southern part of Hebron. And abducted a young man, identified as Osama Fahmi Abu Turki, 28.
Israeli Army Injures 66 Palestinians Near Nablus, Open Fire At Ambulances

Israeli soldiers assaulted, Friday, dozens of Palestinian protesters in Beita town, south of the northern West Bank city of Nablus, and Beit Forik town, east of the city, wounding 66 Palestinians, including one who was shot with a live round in the face, and causing damage to three ambulances.

Ahmad Jibreel, the head of the Emergency Unit of the Red Crescent Society in Nablus, said the soldiers shot one Palestinian with an illegal expanding bullet in the face, in Beit Forik, and seven others with rubber-coated steel bullets, while dozens suffered the effects of teargas inhalation.

He added that the soldiers also shot sixteen Palestinians with rubber-coated steel bullets, and caused dozens to suffer the severe effects of teargas inhalation, in Beita.

Also among the wounded was the deputy-governor of Nablus governorate, Anan al-Ateera, who was shot with a rubber-coated steel bullet in his mouth.
Furthermore, the soldiers fired live round at a Red Crescent ambulance in Beita, including a round that struck and punctured one of its wheels, while transporting a wounded Palestinian to a hospital, and fired live rounds at two other ambulances, smashing their side and rear windows.

The army also attacked many protesters, holding Friday prayers near a military roadblock, installed by the soldiers at the main entrance of Beita town.
Army Attacks The Weekly Nonviolent Protest In Kufur Qaddoum

Israeli soldiers attacked, Friday, the weekly nonviolent procession in Kufur Qaddoum village, east of Qalqilia, in the northern part of the occupied West Bank, causing dozens to suffer the effects of teargas inhalation.

Morad Eshteiwy, the media coordinator of the Popular Committee against the Annexation Wall and Colonies in Kufur Qaddoum, said the soldiers resorted to the excessive use of force against the protesters, and fired dozens of gas bombs, and rubber-coated steel bullets at them.

He added that dozens of Palestinians suffered the effects of teargas inhalation, and received the needed treatment by local medics.

Eshteiwy stated that the procession this week also marked the 69th anniversary of the Palestinian Nakba, when Israel was established in the historic land of Palestine in 1948, after ethnically cleansing, depopulating and destroying hundreds of Palestinian villages and towns.

The ships chased the boats and opened live fire on them, forcing the fishermen back to shore, without being able to fish and provide for their families.

Besides some property damage, the attack did not lead to any casualties of abductions.

In the West Bank, the soldiers invaded al-‘Obeydiyya town, east of Bethlehem, and summoned Nadim Ahmad al-Asa, 25, for interrogation in Etzion military base and security center.
Many Palestinians Injured By Army Fire Near Ramallah

Israeli soldiers attacked, Thursday, Palestinians marching in solidarity with the hunger striking detainees, near Ramallah city, in central West Bank, and fired rubber-coated  bullets at the protesters, wounding at least four, in addition to causing dozens of protesters to suffer the severe effects of teargas inhalation.

The soldiers fired many rubber-coated steel bullets, gas bombs and concussion grenades, at the protesters as they marched in solidarity with the Palestinian detainees who continue their hunger strike for the 25th consecutive day.

The attack led to clashed between the soldiers, and dozens of youngsters, who hurled stones at the invading forces.

Medics moved four Palestinians, who were shot with rubber-coated steel bullets, to local hospitals in Ramallah, and provided the needed treatment to scores of residents who suffered the severe effects of teargas inhalation.

Meanwhile, the head of the Palestinian Prisoners’ Society (PPS), Qaddoura Fares, stated in a press conference held at a protest tent in Ramallah, that the detainees are entering a very serious stage of the hunger strike, especially since many became unable to walk or stand.

On its part, the International Red Cross announced that its representatives managed, for the first time, to visit with the detained leader, legislator Marwan Barghouthi, but did not reveal any further details, citing medical ethics and confidentiality.
11 may 2017
Dawn clashes in Nablus after soldiers storm Joseph’s Tomb

Violent clashes broke out at dawn Thursday after a large number of Israeli troops stormed Joseph’s Tomb in the eastern district of Nablus city.

Eyewitnesses reported that about 10 military vehicles carrying soldiers and one bus carrying Israeli construction workers stormed the mausoleum at around 01:00 am in order to renovate the site.

Consequently, skirmishes between local young men and Israeli soldiers broke out in the area around the shrine before it escalated and expanded to the nearby town of Balata al-Balad, Amman street, and the northern outskirts of Balata refugee camp.

At about 03:30 am, the Israeli occupation forces withdrew to the Beit Furik military barrier, east of Nablus city.

According to local sources, the Palestinian Authority is the only party responsible for conducting renovation works at Joseph’s Tomb.
10 may 2017
IOF storms Sabastia town north of Nablus

Eyewitnesses said that Israeli patrols raided the historic area in the town leading to a state of tension and mobilization among Palestinian families and visitors who were present at the site.

The PIC reporter said that IOF troops stormed a number of shops close to the northern entrance of Bethlehem city and adjacent to al-Ezzah refugee camp.

Israeli forces searched shops and confiscated surveillance cameras’ records in order to identify Palestinians who threw stones at the Israeli military watchtower in the area.