Israeli Occupation Forces (IOF) arrested on Tuesday a 17-year-old Palestinian girl, Taqwa Hammad, from Silwad town near Ramallah after shooting her for no reason.

Chairman of Silwad council, Abdurrahman Saleh, highlighted that IOF troops shot the girl for no reason. A Palestinian ambulance car arrived at the scene and medics started treating the wounded minor, he said. Meanwhile, IOF soldiers arrested the girl from inside the ambulance, he added.

Local sources revealed that the wounded detainee was shot in the thigh and was taken to the Israeli Hadassah hospital in Occupied Jerusalem. She is the sister of martyr Anas Hammad who was killed by Israeli gunfire in late 2015, the sources pointed out.

The family of the arrested girl had been suffering from repeated Israeli violations as IOF soldiers arrested her father for several times and her brother, Abdurahim, is still detained in  Israeli jails, not to mention the murder of her brother Anas.
22 may 2017
Army Injures Eighteen Palestinians Near Jerusalem
dozens suffered the effects of teargas inhalation, and were all treated at a make-shift clinic, installed by the Red Crescent near Qalandia.

The incident happened after the soldiers fired many live rounds, rubber-coated steel bullets and gas bombs at dozens of Palestinians, marching in solidarity with the hunger striking detainees.

The soldiers also invaded many residential and commercial buildings overlooking the main road where the Palestinians marched and used their rooftops as firing posts and monitoring towers.
Several Injured during Clashes as Colonial Settlers visit Joseph’s Tomb

At least two Palestinians were injured by rubber-coated steel bullets and three others suffocated from teargas inhalation during clashes that erupted in Nablus, early Monday, after hundreds of Israeli settlers came to perform rituals at Joseph’s Tomb.

Palestinian medical sources said that two Palestinians were shot and injured by rubber-coated steel rounds, while three others suffocated from teargas inhalation.

Joseph’s Tomb is revered by Jews, Muslims, Christians and Samaritans. Though Jewish Israeli settlers regularly break into the holy site to perform Talmudic rituals, under the claim that it belongs to the biblical Joseph, historical novels stress that the tomb belongs to one Sheikh Yusef Dweikat, a local religious figure.
Palestinian shot and injured by Israeli forces with live fire in central Gaza Strip 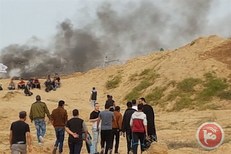 A Palestinian “youth” was injured Monday evening during clashes in central Gaza, along the border with Israel, when Israeli forces shot the Palestinian in the leg with live ammunition.

Medical sources in Gaza told Ma’an that the Palestinian, who sources said was in his twenties, was injured in his right leg, and was in moderate condition at the Shuhada al-Aqsa hospital in Deir al-Balah in the central Gaza Strip.

The Palestinian, whose identity remained unknown, was injured during clashes east of the Bureij refugee camp, that had erupted after Palestinians took to the border to protest in solidarity with some 1,300 Palestinian prisoners, who entered their 36th day of hunger strike on Monday.

At least 20 Palestinians were shot and injured, one seriously, during clashes with Israeli forces earlier Monday in the occupied West Bank districts of Ramallah and Hebron.

The clashes came as Palestinians observed a general strike across the Palestinian territory in support of the mass hunger strike, and also to express opposition to US President Donald Trump who arrived in Israel on Monday for a two-day visit that will include a meeting with Palestinian President Mahmoud Abbas in Bethlehem in the southern occupied West Bank on Tuesday.
Israeli Army Injures Eight Palestinians, Abducts Two, In Jericho

Eight Palestinians were injured, and fourteen others suffered the effects of teargas inhalation, Sunday, after Israeli soldiers invaded the northern area of Jericho city, in the occupied West Bank, clashed with local youths, abducted two residents, and damaged the windshield of an ambulance.

The Palestinian Red Crescent Society (PRCS) in Jericho said eight Palestinians were shot with rubber-coated steel bullets, and were moved to a local hospital.

It added that its medics also provided treatment to at least 14 other Palestinians, who suffered the severe effects of teargas inhalation.

Media sources in Jericho stated that the soldiers also abducted two young Palestinian men, and took them to an unknown destination.
Israeli Colonists Injure A Palestinian, Smash Windows Of Car, Near Nablus

A number of extremist Israeli colonists attacked, on Sunday evening, many Palestinian homes in Burin village, south of the northern West Bank city of Nablus, wounding one Palestinians, and smashed the side windows of a car belonging to a local human rights defender.

The colonists also attacked many Palestinians, wounding Monir Qadous, and smashed the side windows of a local nonviolent activist, identified as Zakariyya Sidda.

Daghlas added that several Israeli military jeeps invaded the village, before the soldiers clashed with local youngsters, and fired concussion grenades and gas bombs, causing many residents to suffer the effects of teargas inhalation.
21 may 2017
Palestinian child hit with teargas canister in the head

A 7-year-old Palestinian child was hit with a teargas canister in his head that was fired by the Israeli occupation forces in al-Khader town in southern Bethlehem on Sunday.

Eyewitnesses said that IOF soldiers fired teargas bombs at schoolchildren in the village during confrontations in Tel area.

They said that one of the canisters hit Hassan Ahmed Issa, 7, in his head, adding that he was taken to a Beit Jala hospital where his condition was described as “stable”.
Palestinian youths clash with soldiers in Kafr Qaddum town

Violent clashes broke out on Saturday evening between Palestinian young men and Israeli soldiers in Kafr Qaddum town, east of Qalqilya in the occupied West Bank.

Eyewitnesses told the Palestinian Information Center (PIC) that the clashes took place at the main entrance to the town, where local young men blocked the road with burning tires and rocks, and hurled stones at the soldiers.

They added that the soldiers responded by firing tear gas grenades and bullets at the young men.
Israeli police attack Palestinian protestors in Silwan district

Violent clashes broke out on Saturday evening between Palestinian young men and Israeli police forces in Silwan district, south of the Aqsa Mosque in Occupied Jerusalem.

According to the Jerusalem Media Center, the clashes took place in Bir Ayoub and Baten al-Hawa neighborhoods in Silwan.

Eyewitnesses reported that young men hurled stones at the police forces, who responded by intensively firing volleys of tear gas and stun grenades onto homes and streets.

In recent days, the Israeli occupation forces have escalated their suppression of protests staged in solidarity with the hunger-striking prisoners in Israeli jails.

On Friday, about 200 Palestinians suffered from bullet or tear gas injuries during angry protests in flashpoint areas of the West Bank, Jerusalem and the Gaza Strip.
20 may 2017
164 Palestinians Wounded by Israeli Forces in One Day during Solidarity Protests

Hundreds of Palestinians took to the streets, in both the occupied West Bank and the Gaza Strip, in solidarity with about 1,600 Palestinian hunger strikers inside Israeli jails. (Some sources report 1,800; it is difficult to obtain a precise count, due to the isolation of detainees by the Israeli Prison Service, the absence of lawyers, transfers to other units, etc.)

Eyewitnesses, along with medical sources, said that forces dealt violently with the protesters, beating them and opening fire on them with both live ammo and rubber-coated metal bullets.

The Palestinian Red Crescent (PRC) announced, at the end of the day, that the total number of the Palestinians wounded during the crackdown on the protesters was 164.

According to the PRC, seven Palestinians suffered moderate to critical injuries, including five in the occupied West Bank and two in the Gaza Strip.
It also said, according to Days of Palestine, that dozens were wounded with rubber-coated metal bullets, in different parts of their bodies, but most sustained “light” injuries.

The Palestinian Health Ministry has confirmed, Friday, that an infant, only 18 months of age, is currently in a serious condition after inhaling tear gas fired by Israeli soldiers at homes in ‘Aboud village, west of Ramallah, in the occupied West Bank.

It stated that local medics resuscitated the infant’s heart and lungs, before moving him to a hospital in Ramallah.

The infant, identified as Abdul-Rahman Mohammad Barghouthi, was later transferred to Hadassah Israeli medical center, in occupied Jerusalem, due to the seriousness of his condition.

It is worth mentioning that the soldiers prevented the Palestinian ambulance from reaching the family home of the wounded infant, an issue that forced the medics to run to the property and carry the child back to their ambulance.

The infant was wounded after several Israeli army jeeps invaded the village, and clashed with youngsters, who hurled stones on the armored vehicles, while the soldiers fired dozens of gas bombs, and rubber-coated steel bullets.

The soldiers also shot and injured five Palestinians with live rounds, one with rubber-coated steel bullets, and caused dozens of suffer the severe effects of teargas inhalation.

The attack took place after dozens of Palestinians held a nonviolent protest, in solidarity with the Palestinian detainees, ongoing with the hunger strike since April 17th.

The child remains motionless, and the man is heard once again saying, “just don’t shoot her, cuff her…,” then he started shooting at the child, “just don’t move, remain as are, stay still.” Then the officers are seen cuffing the child, and a voice is heard saying “she has a knife in her bag.”

Many Palestinians have been recently killed just because the soldiers suspected they “intended to carry out a stabbing attack,” without even attempting to attack anybody. Her name remained unknown until the time of this report.

People witnessing the unfolding events said they were so concerned that the child was about to be killed although she was motionless, because the soldier kept aiming his rifle at her, while standing in a shooting position, ready to pull the trigger at any second.

In related news, the soldiers abducted a young man, identified as Mohammad Awad, from Aqbat as-Saraya, in the Old City of occupied Jerusalem, and moved him to an unknown destination.

Israeli policemen rounded up the Palestinian minor, who was wearing school uniform, and took her to an investigation center in Occupied Jerusalem.

The Israeli police alleged that a knife was found in her possession.
Israeli Soldiers Abduct Two Palestinians, Injure One, Near Tulkarem

Israeli soldiers abducted, on Friday evening, two young Palestinian men, including one who was shot by the army, and rammed a third Palestinian with their jeep, during clashes that took place at the Bazaria junction, east of Tulkarem, in the northern part of the West Bank.

The WAFA Palestinian News Agency said one of the abducted Palestinians was shot with a live round before the soldiers abducted him.

One Palestinian was also injured after the soldiers rammed him with their jeep, and was moved to Thabet Thabet Governmental hospital, in Tulkarem.

Another Palestinian was struck in the chest by a teargas bomb, fired by the soldiers, and was moved to a local clinic.

Furthermore, medics provided the needed treatment to three Palestinians who suffered the severe effects of teargas inhalation.
Israeli Soldiers Abduct A Child, Injure Another, Near Ramallah 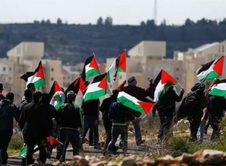 Israeli soldiers abducted, on Friday evening, one Palestinian child, and injured another, after the army invaded Ni’lin village, near Ramallah, while chasing protesters.

Media sources in Ramallah said the soldiers abducted Jamal al-Khawaja, 15, and shot another child with a rubber-coated steel bullet.

The attack took place after the soldiers assaulted Palestinians protesting near the main entrance of Ni’lin village, in solidarity with the ongoing hunger strike of the Palestinian detainees since April 17th.

The Palestinians closed road #445, which leads to many illegal Israeli colonies, built on privately-owned Palestinian lands.

The undercover officers infiltrated into the area, around Bilal Bin Rabah mosque, north of Bethlehem, and abducted the six young men before withdrawing back to the Rachel Tomb area, before several army vehicles advanced into the Palestinian neighborhoods.