According to Israeli media sources, Israeli cabinet is reviewing the legislation due to concerns that it will be rejected by the High Court after facing a wave of backlash.

Although the bill passed last week, the cabinet reportedly thought that the latest version was still too extreme.

Last week, the Israeli Knesset has approved by 62-41 a law empowering Netanyahu and Lieberman to declare war without full cabinet approval in "extreme circumstances."

The vote amended a law which previously required the whole cabinet to vote on such a move, transferring that authority to Netanyahu and Lieberman.
6 may 2018 Land day
Israeli warplane strikes blockaded Gaza

An Israeli fighter jet at daybreak Sunday fired a rocket toward a Palestinian resistance site north of Beit Lahiya town, in the northern Gaza Strip.

The Israeli army claimed the strike came in response to an infiltration carried out by Palestinian young men into the border fence, east of the besieged coastal enclave of Gaza.
5 may 2018 Land day
Clashes erupt with IOF in Kafr Qaddum

Local sources told the PIC reporter that IOF soldiers broke into the home of Zuhair Eshtaiwi and deployed snipers over the house's rooftop turning it into a military point.
6 Injuries by IOF gunfire reported east of al-Maghazi

At least six Palestinians were injured on Saturday afternoon after being targeted by Israeli occupation forces (IOF) east of al-Maghazi refugee camp in Central Gaza.

The PIC reporter said that IOF soldiers opened gunfire directly at the Palestinians and the ambulances leaving six citizens wounded including one paramedic and two children.
Army Abducts A Teen Near Jenin, Summon Several Palestinians For Interrogation

Israeli soldiers invaded, on Saturday at dawn, the al-Yamoun town, west of the northern West Bank city of Jenin, and summoned two others from Jenin and Ramallah for interrogation.

The army also fired live rounds, rubber-coated bullets and gas bombs at many youngsters who protested the invasion into Silwad, in addition to Nablus, in northern West Bank.

Clashes erupted between Palestinian youths and the Israeli occupation forces (IOF) during raids launched in the West Bank at dawn Saturday.

Eyewitnesses told the PIC reporter that clashes broke out at daybreak between Palestinian youths and IOF soldiers after eight IOF patrols raided Ras al-Ain neighborhood in Nablus and broke into a residential building.

The sources pointed out that the arrest campaigns targeting high school students, who are supposed to have their final exams at the end of May, have been stepped up recently.

Israeli soldiers injured, Friday, several Palestinians who suffered the severe effects of teargas inhalation, in Bab az-Zawiya area in the center Hebron city, in the southern part of the occupied West Bank.

Dozens of Palestinians nonviolently marched in the area, while chanting for liberation and independence, before the soldiers attacked them with gas bombs and rubber-coated steel bullets, causing many to suffer the effects of teargas inhalation.

Many Palestinians also hurled stones at the soldiers, especially when they surrounded and invaded homes.

The soldiers occupied rooftops of some homes and buildings and used them as firing posts and monitoring towers.

In related news, dozens of Palestinians held a procession in the al-‘Arroub refugee camp, north of Hebron, expressing their rejection to decision taken by the U.S. administration, severely reducing aid provided to the United Nations Relief and Works Agency (UNRWA).

They said that the United States is not only recognizing occupied Jerusalem as the united capital of Israel in direct violation of International, Law but is also targeting international organizations that provide services to the refugees, who were displaced from their villages and towns, and considered these decisions as political and financial blackmail.
Israeli Soldiers Injure One Palestinian Near Qalqilia

Israeli soldiers attacked, Friday, the weekly procession against the occupation and colonies in Kufur Qaddoum town, east of the northern West Bank city of Qalqilia, wounding one Palestinian with a rubber-coated steel bullet.

The Popular Committee in Kufur Qaddoum said the procession started in the afternoon, when the locals and international peace activists marched while chanting against the ongoing Israeli occupation and military escalation.

It added that the protesters also chanted against the illegal decision of U.S. President Donald Trump recognizing Jerusalem as the unified capital of Israel, and his decision to move the embassy to the occupied city, in direct violation of International Law and numerous United Nations resolutions.

The protesters marched towards the town’s main road, which was blockaded by the army fifteen years ago to enable east access for illegal colonizers, driving to and from Kedumim illegal colony, built on private Palestinian lands.

The army instantly started firing gas bombs, concussion grenades and rubber-coated steel bullets at the protesters, wounding one in his arm, and causing many to suffer the severe effects of teargas inhalation.

The illegal American decision to move the embassy to occupied Jerusalem on May 15th, celebrated by Israel as “Independence Day”, is the same day in 1948, when more than 800,000 of the Palestinians were driven out of their homeland to the West Bank and Gaza Strip, neighboring Arab countries, and other countries of the world.

1.4 million Palestinians lived in 1,300 Palestinian towns and villages all over historical Palestine.

Thousands of Palestinians were displaced from their homes but stayed within the Israeli-controlled 1948 territory, after Israel destroyed 531 Palestinian towns and villages and took control of an additional 774 towns.
Clashes with IOF break out in al-Khalil

Three Palestinians choked on Israeli tear gas as clashes erupted in the city center of al-Khalil city, in the southern West Bank, during which Israeli occupation forces fired teargas to disperse the protesters.

The PIC reporter said that dozens of Palestinian youths gathered after Friday prayer in Bab al-Zawiya square then threw stones and empty bottles at the Israeli military watchtower erected on al-Shuhada Street.
Israeli Soldiers Fracture Arm Of Palestinian Woman Prior To Abducting Her Son

Israeli soldiers invaded, on Friday at dawn, Palestinian homes in Hebron, in the southern part of the occupied West Bank, and fractured the arm of a woman who tried to prevent them from abducting her son.

Media sources in Hebron said the soldiers invaded the home of Bassam Abu Aisha in Jabal Abu Rumman area, in Hebron city, violently searched the property causing excessive damage, and assaulted his wife who tried to prevent them from abducting her son, Sa’ed, 27.

The sources added that the woman suffered fractures in one of her arms, in addition to causing various cuts and bruises, before abducting her son.
Besides causing excessive damage to the family’s home, the soldiers also confiscated cash from the property.

In addition, the soldiers invaded the home of Ayed Doudin, a political leader of Hamas in the al-Alqa village, in Doura town near Hebron, just hours after releasing him from prison after he was held for 18 months under arbitrary Administrative Detention orders without charges of trial.

The soldiers also invaded Beit ‘Awwa town, southwest of Hebron, and searched many homes, including the home of a political prisoner, identified as Nabil al-Masalma.

In related news, the soldiers invaded the Tarbeeqa area in Beit Ummar town, north of Hebron, and violently searched the home of Hilmi Abu Ayyash, before summoning him for interrogation in Etzion military base.

Prior to withdrawing from Beit Ummar, the soldiers fired gas bombs and concussion grenades at local youngsters who hurled stones at the invading jeeps; many Palestinians suffered the effects of teargas inhalation.
Israeli Soldiers Injure A Child, Abduct A Woman, In Jerusalem 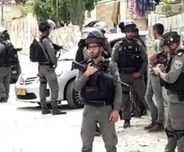 Israeli soldiers invaded, on Thursday afternoon, the town of al-‘Isawiya, in occupied East Jerusalem, mildly injured a child and abducted a Palestinian woman.

Mohammad Abu al-Hummus, a member of the Follow-Up Committee in al-‘Isawiya, said dozens of soldiers, and police officers, invaded the town just as the students were leaving their schools.

He added that the soldiers invaded homes and abducted a Palestinian woman, identified as Hayat Mheisin, the mother of Ismael, who was recently abducted by the army and is still under interrogation.

Furthermore, the soldiers fired rubber-coated steel bullets and concussion grenades at random during the invasion, wounding a child in the lower limbs, and causing many to suffer the effects of teargas inhalation.
3 may 2018 Land day
Israeli Soldiers Abduct 13 Palestinians In The West Bank

Updated: Israeli soldiers abducted, on Thursday at dawn, twelve Palestinians from their homes in the several parts of the occupied West Bank, including Jerusalem, during extensive military invasions and violent searches of homes.

Media sources in Nablus, in northern West Bank said the soldiers invaded and searched many homes in several parts of the governorate and abducted six Palestinians.

In occupied Jerusalem, the soldiers also searched homes and abducted two university students, identified as Osama Sayyed Ahmad and Khalil Kanaan, from the Suwwana neighborhood, in addition to Mohammad Jamal Abu Eid, from Biddu town, northwest of the city.

After searching many homes in Biddu, the soldiers attacked Palestinians, who protested the invasion, and fired several live rounds, rubber-coated steel bullets and gas bombs.

In Ramallah, in central West Bank, the soldiers invaded homes and stores in Surda town, northeast of the city, and confiscated surveillance equipment and recordings.

In addition, the soldiers abducted Hamza Samir Masalma, 24, from Bethlehem, after stopping him in Silwad town, northeast of Ramallah.

The soldiers also invaded many homes in Aida refugee camp, north of Bethlehem, and placed huge rocks blockading a main road between Shoshahla village and al-Khader town, south of Bethlehem, completely isolating many communities and preventing the Palestinians from entering their farmlands.
Israeli Soldiers Continue to Desecrate Islamic Graves in Jerusalem

For the fourth consecutive day, Israeli forces continue to attack the centuries-old Bab Al-Rahma Islamic cemetery near Al-Aqsa mosque, by digging up graves of Palestinians.

According to the PNN, WAFA agency reported, on Wednesday, that a number of Palestinians were injured after being physically attacked by Israeli forces, as the latter continued to desecrate  an ancient Muslim cemetery, just outside Jerusalem’s Old City wall.

The soldiers continued to dig up graves and land in the cemetery, and to place metal fences in parts of it, while soldiers assaulted a group of Palestinians who managed to access the cemetery and attempted to prevent the continuing violation of the cemetery.

Israeli authorities intend to build a “National Park” on its lands.

Desecration of not only Islamic holy sites, but Christian as well, by Israelis, occurs on a near routine basis, in occupied Palestine.