The Israeli occupation navy on Wednesday morning opened machinegun fire at Palestinian fishermen and their boats off the coast of the Gaza Strip.

Although the Israeli army extended the permitted fishing areas off the shores of Gaza up to 15 nautical miles and deployed buoys as marks for fishermen, but its naval forces opened fire once again at Palestinian fishermen during their work within 4 nautical miles off the coast of Beit Lahia, north of Gaza.

Luckily, no one was hurt in the wanton shooting attack.

According to the fishermen committees, several Israeli gunboats were seen 12 nautical miles away from the shore of Wadi Gaza.
Army Abducts Three Palestinians In Ramallah And Jerusalem

Israeli soldiers abducted, on Wednesday at dawn, two Palestinians from their homes in the central West Bank governorate of Ramallah, and one near Jerusalem.

It is worth mentioning that the soldiers fired many gas bombs and concussion grenades at Palestinians, protesting the invasions into the two areas.

The Israeli occupation police on Tuesday night stormed the Aqsa Mosque, forced Muslim worshipers on retreat to leave it and arrested one of them.

Eyewitnesses said that  police forces forced all worshipers who were on retreat at the Mosque to leave, took pictures of them and checked their IDs.

They added that the police prevented some worshipers from using cellphones to record their violations.

Since the beginning of the holy month of Ramadan, the Israeli police have been raiding the Aqsa Mosque at night, assaulting worshipers on retreat and forcing them to leave.
Army Abducts Three, Injures Two, In Deheishe

Dozens of Israeli soldiers invaded, on Wednesday at dawn, the Deheishe refugee camp, south of the West Bank city of Bethlehem, abducted three Palestinians and injured two others.

The soldiers invaded the refugee camp, and opened fire at dozens of protesters, wounding two young men with live fire, and caused several others to suffer the effects of teargas inhalation.

Medical sources said one of the wounded Palestinians was shot with a live round in his knee, and the other in his right thigh; both were rushed to a hospital in Bethlehem, suffering moderate wounds.

Furthermore, the soldiers invaded and searched several homes in the refugee camp, and abducted Wisam Shawabka, in addition to Mohammad Abu Hadrous and his brother Shadi.
Israeli Soldiers Shoot And Abduct A Child Near Bethlehem 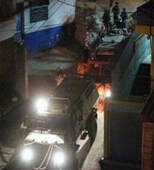 Several Israeli army jeeps invaded, on Tuesday evening, the town of al-Khader, south of the West Bank city of Bethlehem, and shot a Palestinian child before abducting him.

They added that the soldiers shot Mahmoud Salah Amro, 16, in his legs, before abducting him, and took him to an unknown destination.

The soldiers also closed some surrounding areas, before stopping and searching cars, and interrogated several Palestinians while inspecting their ID cards.
21 may 2019
Israeli Rorces Raid Shop in Hebron, Assault Elderly

Israeli forces raided a shop in the old town of Hebron, destroyed its contents, and assaulted and injured an elderly person, said the shop owner, Ghassan Abu Hadid.

Israeli forces reportedly raided the shop, smashed the refrigerators’ glass doors and destroyed some shelves before ordering the owner to close the shop, warning him of the consequences of reopening it again.

According to WAFA, an 83-year-old elderly who was present at the shop, at the time of the raid, was physically assaulted and inured. The elderly sustained bruises and cuts in his face and hands.

Media sources said several army jeeps invaded the town, especially its center, and drove around its streets and alleys.

They added that many Palestinians protested the invasion, and hurled stones at the military vehicles, while the soldiers fired gas bombs, concussion grenades and flares, causing a fire in a land in the western part of Beit Forik.

Furthermore, the soldiers closed the military roadblock at the entrance of the town, and prevented the Palestinians from crossing.
20 may 2019
IOF storms Arroub refugee camp, attacks residents

Violent clashes broke out on Sunday between the Palestinian citizens of Arroub refugee camp, north of al-Khalil, and the Israeli occupation forces (IOF).

Local sources said that the IOF heavily fired live ammunition, stun grenades, and tear gas canisters at the Palestinian residents' homes, and chased youths on the streets of the camp.

The sources said that the confrontations flared up after the IOF closed the camp's entrances and blocked the movement of Palestinian citizens.
19 may 2019
Israeli Soldiers Abduct A Palestinian In Bethlehem

Media sources said the soldiers abducted Amer Ra’fat Zayyah, 25, after breaking into his home and violently searching it.

They added that dozens of soldiers invaded the town, and fired many life rounds, gas bombs and concussion grenades.

The army said it invaded the town after Palestinian youngsters hurled stones at a colony’s bus, and army jeeps.
18 may 2019
Palestinian injured by Israeli gunfire southeast of Gaza

A Palestinian citizen was injured by Israeli gunfire on Saturday during his presence in the east of Khan Younis, south of the Gaza Strip.

According to local sources, the Israeli occupation forces opened fire at a group of citizens east of Khan Younis.

A medical source said that one young citizen suffered a bullet injury in his hand and was rushed to hospital.
Palestinian injured by Israeli gunfire south of West Bank

A Palestinian citizens suffered a bullet injury on Friday evening when the Israeli occupation forces opened fire at him in the south of the West Bank.

According to the Palestinian health ministry, a citizen suffered a bullet injury in one of his legs after soldiers opened fire at him at the main entrance to Beit Awwa town, west of al-Khalil.

The health ministry did not provide details about the incident.
17 may 2019
Soldiers Injure Four Palestinians In Kufur Qaddoum

Israeli soldiers attacked, Friday, the weekly procession against the Annexation Wall and Colonies, in Kufur Qaddoum town, east of the northern West Bank city of Qalqilia, wounding four Palestinians with rubber-coated steel bullets, including a child who was injured in his chest.

Morad Eshteiwi, the media coordinator of the Popular Committee against the Annexation Wall and Colonies in Kufur Qaddoum, said the soldiers resorted to the excessive use of force against the protesters, and fired rubber-coated steel bullets and gas bombs at them.

He added that the soldiers also broke into one home, and tried to ambush the protesters, in addition to using an under-construction home to fire at the protesters.

Medical sources said four Palestinians were injured by the rubber-coated steel bullets, including two who were moved to a hospital; one of them is a child, and several others suffered the effects of teargas inhalation.

The protest started from the center of the village, while many carried big keys made of cardboard, symbolizing the determination to achieve the refugees’ internationally guaranteed Right of Return, and the ongoing struggle for the liberation of Palestine.

Kufur Qaddoum witnesses frequent Israeli invasions, assaults and abductions as it continues to hold its weekly nonviolent processions against the illegal Annexation Wall and colonies, and against the closure of the main road, which was blockaded by the military fifteen years ago, to enable easy access for colonialist settlers driving to and from the Kedumim colony, built on private Palestinian lands.
Israeli Soldiers Attack The Weekly Protest In Ni’lin

Israeli soldiers resorted, Friday, to the excessive use of force against the weekly nonviolent procession against the illegal Annexation Wall and Colonies in Ni’lin village, west of the central West Bank city of Ramallah, wounding several persons, and causing a few trees to burn.

Media sources said the soldiers fired a barrage of gas bombs at local and international peace activists, who marched from the center of the village, heading towards the villagers’ orchards, largely isolated behind the illegal wall.

They added that several nonviolent protesters suffered the effects of teargas inhalation, and received the needed treatment.

The soldiers also fired many gas bombs and concussion grenades into the Palestinian olive orchards, causing many trees to burn, before the firefighters managed to control the fire.

According to local sources, Israeli forces handed over two injured Palestinian youths to the Palestinian Red Crescent Society (PRCS) crews after beating them and taking them in for interrogation at an Israeli military center.

No reason was provided for the attack.