Violent clashes broke out on Tuesday evening between Palestinian citizens and the Israeli occupation forces (IOF) in Tuqu' town in Bethlehem.

Local sources said that the IOF raided the town and fired tear gas canisters and stun grenades at the residents who responded by throwing stones.

No injuries were reported, they added.
Syria reports Israeli airstrike on Quneitra

The Israeli army on Monday evening launched an aerial attack on Quneitra province, south of Syria, according to the Syrian Arab News Agency (SANA).

SANA reported, quoting a military source, that an Israeli missile targeted Tel al-Shaar in Quneitra, adding that a military vehicle was targeted, a Syrian soldier was killed, and two others were injured.

The Israeli army announced that it had bombed a target in Syria from which an attack on an Israeli aircraft was launched. The missile did not strike the plane and landed in Syrian territory.

Quneitra province is adjacent to the Golan Heights, of which two thirds are occupied and annexed by Israel.
27 may 2019
Israeli military: Off-duty soldier set fire to Palestinian fields
after clashes broke out on May 17 between Israeli settlers from the nearby settlement of Yitzhar and Palestinians from the surrounding villages of Burin, Urif, and Asirah al-Qibliyah.

In another video from the clashes, Israeli troops could be seen standing by and watching as settlers throw rocks at Palestinians.

According to B’Tselem, the Israeli military had granted “almost total immunity” to the settlers involved in the attacks with neither of them being interrogated or arrested.

The Israeli military refused to comment on why no settlers had been arrested.

Yitzhar settlers are notorious in the West Bank for extremist violence, and are frequently involved in violent attacks against Palestinians.

More than half a million Israelis live in over 120 settlements built since Israel’s occupation of the Palestinian territories of the West Bank in 1967.

This is while much of the international community considers the settler units illegal and subject to the Geneva Conventions, which forbid construction on occupied land.

A video released by the Israeli human rights group B’Tselem shows a group of Israeli settlers attacking Palestinian villagers and setting their farms on fire on May 17th – and today, the group managed to identify one of the arsonists in the video as an off-duty Israeli soldier.

According to B’Tselem, on Friday, 17 May 2019, Israeli paramilitary settlers torched Palestinian farmers’ fields in Burin and ‘Asirah al-Qibliyah. In both villages, the settlers threw stones at the residents’ homes.

In ‘Asirah al-Qibliyah, where the area is controlled by military watchtowers, a settler even fired shots in the air. Soldiers nearby did not arrest the attackers and prevented the Palestinians from approaching their burning land.

The Israeli military followed the attack with a public statement containing the absurd and easily disproved claim that *Palestinians* had started the fires – a version of events that was then unquestioningly repeated by the Israeli and US media.

The attack took place about a kilometer away from the Giv’at Ronen settlement point, and the Israeli paramilitary settlers involved in the attack apparently came from the settlement of Yitzhar.

The fire-setting by the Israeli soldier is especially disturbing given that it took place in the midst of an extremely dry season in Israel and Palestine, with wildfires having burned hundreds of acres in Israel over the past several weeks, and burn bans in place across the country to try to prevent the spread of any more fires.

Setting fires intentionally during such a climate and atmosphere could have a devastating impact and would normally have severe consequences.

Given the Israeli military’s record of failing to prosecute Israeli soldiers who commit crimes against Palestinians – even when those crimes are documented clearly on video – Palestinians impacted by the crime on May 17th say that they have little faith that the perpetrators in this case will be prosecuted.

Neither the army nor the police have arrested the perpetrator, although he was clearly identified and both forces confirmed his identity.
26 may 2019
Two young men injured by Israeli gunfire east of Gaza

Two Palestinian young men suffered bullet injuries on Sunday morning during their presence in a border area to the east of Khan Younis, south of the Gaza Strip.

A reporter for the Palestinian Information Center (PIC) said that Israeli soldiers opened fire from watchtowers behind the security fence at two young men during their presence in the area between al-Qarrara and New Abasan, east of Khan Younis.

One of the young man suffered a bullet injury in his belly while the other was injured in one of his legs. The two wounded youths were transferred to the European Gaza Hospital.
Israeli police kidnap three Jerusalemites

The police claimed these two young men assaulted settlers living in the neighborhood.

The police also kidnaped a young man called Omar al-Zaghir as he was walking in al-Wad street in the Old City of Jerusalem.

Earlier, police forces brutally assaulted and wounded a group of Jerusalemite young men in al-Wad street in the Old City, rounded up two of them and took them to one of their detention centers.
25 may 2019
Army Injures Sixteen Palestinians In Gaza

The Palestinian Health Ministry has reported that Israeli soldiers injured, Friday, sixteen Palestinians during the Great Return March processions, ongoing for the 59th week, in the besieged Gaza Strip.

The Health Ministry in Gaza said the injuries varied between rubber-coated steel bullets and gas inhalation, including some who were shot with high-velocity gas bombs.

It added that a journalist, and a female medic volunteer, were among the injured Palestinians.

All the wounded Palestinians received the needed treatment in make-shift clinics, without the needed to move them to hospitals.

Israeli soldiers have killed 307 Palestinians, including medics and journalists, and injured more than 29000, since the Great Return March procession started in the Gaza Strip, on Palestinian land Day, March 30th, 2018.
24 may 2019
Army Injures Many Palestinians In Kufur Qaddoum

Israeli soldiers attacked, Friday, the weekly procession against the illegal Annexation Wall and colonies, causing many protesters to suffer the effects of teargas inhalation.

Morad Eshteiwi, the media coordinator of the Popular Committee in Kufur Qaddoum, said the protest started from the center of the village, where the protesters marched carrying Palestinian flags, and chanting against the ongoing illegal Israeli occupation of Palestine.

He added that the soldiers resorted to the excessive use of force against the protesters, and fired many gas bombs, concussion grenades and rubber-coated steel bullets at them.

The soldiers also invaded and ransacked a few homes in the town, and occupied their rooftops, before using them as firing posts.

Several Palestinian youngsters protested the invasions, and attacks, and hurled stones at the soldiers, in addition to burning tires.

Medical sources said dozens of residents suffered the effects of teargas inhalation, in addition to cuts and bruises.
Israeli Soldiers Abduct A Child Near Jenin

The child’s father said the soldiers stopped his son, Amjad Ziad Zyoud, 15, on the main Jenin-Haifa Road, and maced him with pepper spray before repeatedly striking and punching him.

The child suffered many cuts and bruises to several parts of his body, before Palestinian medics rushed him to Jenin Governmental Hospital.

It is worth mentioning that the army has recently increased its deployment on main roads leading to various villages and towns in Jenin governorate, in addition to installing many roadblocks.
Soldiers Abduct, Injure, Several Palestinians Trying To Reach Al-Aqsa Mosque In Jerusalem

Israeli soldiers abducted and injured , on Friday morning, several young Palestinian men in Qalandia area, north of occupied East Jerusalem, while trying to enter the city for prayers in the Al-Aqsa Mosque, on the third Friday of the holy Muslim month of Ramadan.

Media sources said the Palestinians were trying to enter Jerusalem through gaps in the illegal Annexation Wall, after Israel rejected their permit applications to enter the city to pray.

The army abducted many young men, and took them to their nearby military base, in addition to causing dozens of Palestinians to suffer the effects of teargas inhalation, in addition to cuts and bruises.

They added that the army has deployed dozens of soldiers and military vehicles in large areas near the illegal wall in that area.

It is worth mentioning that Palestinians below the age of 40 are not granted access to occupied Jerusalem for prayers.
23 may 2019
Child Suffers A Fracture After Israeli Soldiers Assaulted Him In Hebron 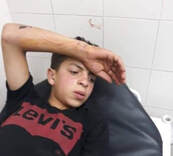 A Palestinian child suffered, late on Wednesday at night, a fracture in one of his arms, after Israeli soldiers invaded his home in Hebron city, in the southern part of the occupied West Bank.

Medical sources in Hebron said the soldiers invaded and ransacked many homes in Jabal Johar area, south of Hebron city, and constantly assaulted a child, causing fractures in one of his arms, in addition to several bruises.

They added that the child, identified as Khaldoun Emad Da’na, 13, was rushed to Hebron Governmental Hospital, and received the needed treatment.

Israeli soldiers invaded, on Thursday at dawn, several Palestinian communities in the West Bank governorates of Qalqilia, Tulkarem,  Nablus and Jenin, searched and ransacked many homes, before abducting eleven Palestinians, and injured one.

During the invasion into Qaffin, several Palestinian youngsters hurled stones at the military vehicles, while the soldiers fired a barrage of gas bombs and rubber-coated steel bullets.

A few Palestinians suffered the effects of teargas inhalation, and one teen was shot with a rubber-coated steel bullet, before the soldiers rushed him to Thabet Thabet Hospital.