An Israeli soldier was injured with a rock during clashes at the entrance of the al-Jalazun refugee camp, in the central occupied West Bank district of Ramallah, on Thursday evening.

Clashes erupted after Israeli forces set up a checkpoint near the refugee camp, following the death of 23-year-old Ma’an Nasser-Eddin Abu Qare’, who was killed by Israeli forces on Thursday afternoon, after he allegedly attempted to stab Israeli soldiers at a bus stop, in eastern Ramallah.

Israeli soldiers fired tear-gas bombs and stun grenades at local youth who gathered near the flying checkpoint, while the youth threw rocks at Israeli forces, injuring one soldier.

Israeli forces also closed the Attara checkpoint north of Ramallah, which connects the northern and central West Bank, and a main road near the refugee camp connecting Ramallah to Jerusalem.

Earlier in the afternoon, according to Ma’an, Israeli forces closed the main entrances to the Ramallah-area villages of Dura al-Qaraa, Silwad and Deir Jarir towns.

Locals reported that the checkpoint and road closures made travel in between Ramallah and villages north of the city nearly impossible.
An Israeli army spokesperson said they were looking into reports.

Abu Qare’ was the 238th to be killed by an Israeli since the beginning of a wave of unrest across the occupied Palestinian territory and Israel, in October of 2015.

Israel’s response to alleged attacks — both large and small — such as punitive home demolitions, the sealing of entire villages, mass detention campaigns, and withholding the bodies of Palestinians slain while committing attacks, has been condemned by rights groups, who have said the measures amount to “collective punishment” and represent a clear violation of international law.
Dozens of injuries reported in West Bank, Gaza clashes

In Gaza, two youths were slightly injured in their feet as Israeli forces opened fire at a group of Palestinian youths east of Gaza.

Three people were injured during the raid including an Israeli peace activist.

Several homes were targeted with teargas bombs during the raid, while a local resident was arrested.

The march was organized in commemoration of the Balfour declaration amid large participation of foreign activists.
A child among dozens of protesters injured during Nil'in clashes

A Palestinian child was hit with a rubber bullet in his head, while dozens of locals and foreign activists choked on teargas during Nil’in clashes west of Ramallah.

The march was organized in commemoration of the Balfour declaration.

Several local homes and cars were damaged due to the heavy firing of teargas bombs.

A child was moderately injured and taken to a local hospital after being hit by a rubber bullet in his head.

Despite the Israeli forces’ large numbers, the protesters managed to perform Friday prayer in a land threatened with confiscation.
Violent clashes break out in Nablus village

A PIC reporter quoted eyewitnesses as saying that Israeli forces broke into a number of local homes in the town amid heavy firing of teargas bombs.

Several children were investigated during the raid.

Dozens of teargas suffocation cases were reported among the locals, the sources added.
IOF rolls into Tulkarem, sparks violent clashes

Violent clashes burst out in Tulkarem at dawn Friday after the Israeli occupation forces (IOF) rolled into the city and closed off all access roads out of and into the area.

Speaking with a PIC news correspondent, Palestinian protesters said violent clashes flared up on the western thoroughfare to Tulkarem province, in the northern occupied West Bank, and on al-Khadouri Road, leading to Jashuri settlement.

The occupation troops have also been deployed in al-Tiba Street and near the Israeli chemical factories, to the west of Tulkarem.

Other troops have been stationed at the Netanya checkpoint, where Palestinian vehicles and passengers have been subjected to intensive inspection.

The IOF have also combed the area in search for surveillance cameras filming anti-occupation shooters.

On Thursday evening, an Israeli soldier was lightly wounded in an anti-occupation shooting attack in western Tulkarem province.
3 nov 2016
A woman among 5 Palestinians arrested in OJ, Nablus

The Israeli Occupation Forces (IOF) arrested Thursday afternoon five Palestinians from Jerusalem and West Bank. A woman and students were among the detainees.

The young man was detained after Israeli forces stopped and searched his car at a military checkpoint.

A bullet-proof vest, a flashlight, a baton, and a tear gas bomb were allegedly found in his car, according to police statement.

Along the same line, a Jerusalemite woman was arrested in the Old City and taken for investigation in a nearby police station for unknown reasons.

Two other students were arrested as clashes broke out south of Nablus. Several injuries were reported during the clashes.

The clashes broke out when Israeli forces heavily fired teargas bombs at Palestinian students while leaving their school.

A 15-year-old girl was hit with a sound bomb in her head during the confrontation, while dozens others suffered teargas inhalation cases.

The PA Ministry for Education strongly condemned the Israeli systematic attacks against Palestinian schools in occupied Jerusalem and West Bank, calling for protection the education process in Palestine.
Many Palestinians Injured In Qabatia

Israeli soldiers invaded, on Thursday at dawn, Qabatia town, south of the northern West Bank city of Jenin, and clashed with local youths, causing scores of residents to suffer the severe effects of teargas inhalation.

Media sources in Qabatia said the invasion was carried out by a large military force, and that the soldiers broke into many homes and violently searching them.

The soldiers also occupied the rooftop of a home belonging to Mohammad Abdul-Rahman Abu Zeid, and used it as a military tower.

The head of the Emergency Unit of the Red Crescent in Qabatia, Mustafa Kamil, said scores of residents suffered the effects of teargas inhalation, after the soldiers invaded the center of the town, the schools’ area and the local taxi station area.

He added that one of the wounded Palestinians is a woman, identified as Faiza ‘Aref Abu Zeid, who suffers from respiratory issues and chronic conditions.
Army Kidnaps A Father, His Wife, And Their Five Children, In Ramallah

Israeli soldiers invaded, earlier Thursday, a Palestinian home in the al-Am’ari refugee camp, south of Ramallah, and kidnapped a father, his wife, and their five children, in addition to confiscating equipment from the family’s auto repair shop.

The soldiers then kidnapped the father, Mahran, his wife and their five children, and took them to an unknown destination.

The army also invaded the family’s car repair shop, on the ground level of the property, and confiscated several cars.

The invasion led to clashes between the soldiers and local youths who hurled stones at the military vehicles, while the soldiers fired many rubber-coated steel bullets, and gas bombs.

Two Palestinians were shot with rubber-coated steel bullets, and many others suffered the effects of teargas inhalation.
2 nov 2016
Soldiers Invade Zabbouba, Assault A Child 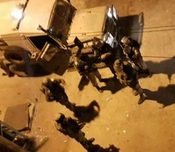 Several army vehicles invaded the village, before the soldiers stormed and searched homes, and interrogated many Palestinians.

The soldiers also searched the home of ‘Assem Sha’bana, and occupied its rooftop before using it to fire gas bombs and rubber-coated steel bullets at local youngsters who hurled stones at military jeeps invading their village, causing many Palestinians to suffer the effects of teargas inhalation.

The Israeli occupation army on Tuesday evening carried out military exercises in Furush Beit Dajan village, east of Nablus, without any regard for the safety of the residents and their property.

Local farmers reported that they were surprised to see Israeli tanks and armored vehicles between their homes and in their cultivated fields.

They added that the Israeli army deliberately caused widespread damage to their crops after they deployed their military vehicles on their plots of land.

The Israeli army often carries out its military drills on the outskirts of the village and rarely inside its neighborhoods, according to the farmers.
Abductions, military maneuvers reported in West Bank sweep by IOF

Reporting from Nablus, a PIC news correspondent said the IOF rolled into the city in a flock of military jeeps at dawn and cordoned off the Old City.

Violent clashes burst in Faysal Street and the Eastern Souq, where the occupation troops attacked the Palestinian protesters with heavy spates of teargas canisters and sound bombs.

The IOF wreaked havoc on civilian homes in the Old City and kidnapped three Palestinian youngsters.

Overnight, the IOF kidnapped youngster Imad Masharqa, a resident of Nour Shams Camp in Tulkarem, at the Hawara military checkpoint, in southern Nablus.

An Israeli soldier notified a Palestinian citizen that live ammunition will be discharged all the way through the maneuvers.