Dozens of Palestinians were injured Wednesday evening as clashes broke out in Abu Dis town, east of occupied Jerusalem.

Dozens of injuries were reported among the students, eyewitnesses said.

The Palestinian Red Crescent Society affirmed that at least ten students suffered rubber bullet injuries while 39 others choked on teargas.

According to a PIC on-the-spot reporter, the IOF broke into the home of the Palestinian civilian Hussam Isahaq in Azzoun town and rummaged into the building before they aggressively attacked the native inhabitants.

A number of civilians were detained by the IOF near the main entrance to Azzoun before they were released afterwards.

The occupation troops sealed off the main access roads to the town and raked through the area, triggering panic among children.
Ras al-Ahmar families to leave homes again for Israeli army drills

The Israeli occupation army on Tuesday evening notified more than 10 families living in ar-Ras al-Ahmar hamlet in Tubas province to leave their homes for many hours during three days next week, saying its troops would conduct usual military drills in their area

Local activist Aref Daraghmeh said the families would have to leave from nine o’clock in the morning to five o’clock in the evening on Tuesday, Wednesday and Thursday next week.

Daraghmeh added that the Israeli army had embarked for days on setting up shelters, fortifications, and paths near and on cultivated plots of land and deploying heavy military vehicles in the area.

The villagers were forced to leave their homes during two days for the same purpose in mid-November.

During previous military exercises, the Israeli army had always caused extensive damage to crops and pastures by driving over them and destroyed roads used by the villagers.

Those drills also led the residents to stay without adequate shelter in severe weather conditions.

Israel treats the Bedouin residents in Tubas and the Jordan Valley as unwanted people and uses their areas as military training fields in order to force them to leave. As the occupying power in the West Bank, Israel must not use the territories under its occupation for military purposes, such as training for war or routine military drills. Displacing residents to make way for training violates the international humanitarian law.

Additionally, training grounds are selectively chosen. Training never takes place close to settlements in these areas so as not to put settlers in danger or disturb their lives. Settlers have never been forced to vacate their homes to allow the army to conduct such exercises.

No Israeli official has ever explained how training grounds are chosen, but the apparent selectiveness uncovers the motivation behind it, which dispossession and displacement.
Israeli navy attacks Gaza fishermen

The Israeli occupation navy on Tuesday evening opened machinegun fire at Palestinian fishermen and their boats off the coast of the embattled Gaza Strip.

Israeli gunboats opened fire at fishing boats off the northern and southern coasts of northern Gaza and forced fishermen to return ashore, according to the Palestinian Information Center (PIC) in Gaza.

The naval forces also fired some flares during the gunfire attacks on boats.

Despite their keenness on working within the permitted fishing zone to avoid getting injured, killed or arrested, Gaza fishermen are exposed every once in a while to persecution, shooting and detention by the Israeli navy.
29 nov 2016
Israeli Army Carries Out A Limited Invasion Into Southern Gaza 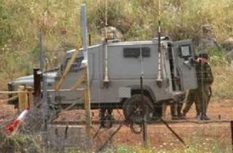 Several armored Israeli military vehicles, and bulldozers, invaded on Tuesday morning Palestinian agricultural lands, close to the border fence, in Rafah, in the southern part of the coastal region.

They added that the invading vehicles came from Sofa Israeli military base, close to the border fence.

The attack is part of frequent invasion and violations carried out by the army, and the navy, against the Palestinians, their lands, and properties, in the besieged and impoverished coastal region.
3 children among 5 Palestinians arrested in Ramallah

According to official Palestinian Authority (PA) news agency Wafa, the IOF stormed the town amid heavy fire of live bullets and teargas bombs which led to the outbreak of violent clashes.

The detainees were taken to an unknown detention center.
IOF targets Palestinian workers north of Gaza

According to the PIC reporter, Israeli forces targeted a group of Palestinians while working near the border crossing to the north of the Strip.

No injuries were reported during the armed attack.

A PIC news correspondent said the Israeli gunboats unleashed spates of gunfire on Palestinian fishermen setting sail off Beit Lahiya seashore, to the north of the blockaded Gaza Strip.

The fishermen were attacked as they sailed within the authorized three-nautical-mile zone.

No injuries were reported in the attack.

The Israeli occupation navy has often targeted Palestinian fishermen in the besieged coastal enclave with randomly-shot spates of machinegun fire and seized their fishing vessels.

Fishing is the sole source of income for 4,000 Palestinian fishermen in the unemployment-stricken enclave.
IOF brutally attacks Palestinian child

The child was taken to hospital suffering from bruises and fractures all over his body, the sources added.
Israeli army strikes UN site on Syrian territory

Israeli fighter jets at predawn Monday struck a UN site to the south of the occupied Golan Heights.

Israel’s Channel 2 quoted the occupation army spokesman as stating that the strike launched by the Israeli Air Forces came in response to gunfire unleashed on the Golani Brigade on Sunday while carrying out ordinary drills near the border fence with Syria.

He added that the strike targeted an abandoned site that was used by the UNIFIL forces, which retreated from the area due to the raging hostilities between the Syrian government battalions and the opposition militias. ISIS militias reportedly grabbed hold of the site.

This is the first time the Israeli occupation army claims responsibility for an attack on the Syrian territories, after it kept mum over dozens of similar raids.

Four unidentified fighters were killed Sunday in an exchange of fire with the Israeli occupation Golani Brigade near the Syrian borderland.
Ex-prisoners among 11 detainees in West Bank

The Israeli Occupation Forces (IOF) arrested at dawn Monday 11 Palestinians during an Israeli raid and search campaign throughout the West Bank cities and towns.

The IOF claimed that 11 “wanted” Palestinians were arrested on Monday for being involved in anti-occupation attacks.

Two detainees were arrested in occupied Jerusalem while another was detained south of Ramallah, in addition to two detainees in Bethlehem.

Five youths affiliated with Hamas Movement were also among the 11 detainees.

The Israeli military sources also claimed that weapons were found during the raid and search campaign.

The PIC reporter affirmed that Israeli forces violently broke into Aroub refugee camp, north of al-Khalil, and arrested two youths after breaking into their houses.

Several local houses were also stormed and searched including the MP Hatem Kufaisheh’s house which led to the outbreak of violent clashes.

In Bethlehem, two Palestinians were arrested including an ex-detainee.

Two more arrests were carried out in occupied Jerusalem including an ex-detainee.

Fishing is the sole source of income for 4,000 Palestinian fishermen in the blockaded Gaza Strip.

Israel allows Gazans to set sail within a three-nautical-mile zone only, which does not meet the needs of the fishermen who support 50,000 family members whose survival largely hinges on fishing.
26 nov 2016
Palestinian young man injured near OJ

A Palestinian young man was shot and injured by Israeli soldiers on Friday after clashes broke out in Qatna town, northeast of occupied Jerusalem.

Eyewitnesses told Quds Press that the clashes broke out when Israeli occupation forces stormed the town amid heavy firing of teargas bombs and attacked local youths once they approached the apartheid wall.

A young man was transferred to hospital after being shot and injured in his leg during the clashes.

A second young man was earlier injured as similar clashes erupted in the neighboring Hazma town, northeast of the occupied city.
Israeli Soldiers Delay An Ambulance Rushing To Rescue A Wounded Palestinian

Israeli soldiers stopped, on Friday, a Palestinian ambulance while rushing to provide a wounded young man with the urgently needed medical treatment, and delayed it for 10 minutes while photographing and interrogating the medics, in Hizma town, northeast of occupied Jerusalem.

The Palestinian Red Crescent (PRC) said the soldiers stopped one of its ambulances while rushing to provide treatment to the wounded Palestinian, and interrogated the medics for more than ten minutes.

The soldiers also photographed the medics and their ambulance, while interrogating them, the PRC added.

He was shot with a rubber-coated steel bullet in one of his legs, during clashes that took place after the soldiers invaded Hizma.
25 nov 2016
IOF supresses Bil’in weekly march

Local sources affirmed that Israeli forces violently attacked the participants and prevented them from approaching the Apartheid Wall, established at the expense of the town lands.

The area was then declared a closed military zone.

The weekly march was organized by the popular committee against settlement in Bil’in amid large participation of Palestinian and foreign activists.

The Israeli occupation army at dawn Friday raked through al-Khalil’s southern town of Dura, in the southern West Bank, in an attempt to quash anti-occupation stone-throwing.

The vehicle sustained material damage. However, no injuries were reported in the stoning attack.

The Israeli occupation army scoured the area in the hunt for the alleged stone throwers, sparking panic in the area.