On Wednesday morning, Israeli soldiers, stationed across the border fence, fired many live rounds targeting farmers in Palestinian lands, close to the border fence, along the eastern area of Khan Younis, in the southern part of the Gaza Strip.

Eyewitnesses said the soldiers, manning military towers across the border fence, fired at farmers and bird hunters, in Palestinian lands in the towns of al-Fakhari, al-‘Amour, Abasan al-Kabeera, Abasan al-Jadeeda, at-T’eimat, al-Qarara and Sreij in addition to the Najjar neighborhood.

The attacks did not lead to casualties among the Palestinians, but forced them out of their lands in fear of further military fire.
IOF breaks into Nablus towns

A Palestinian lady was injured and another was kidnapped by the Israeli occupation forces (IOF) on Wednesday morning during clashes in Jerusalem’s northern town of al-Ram.

A PIC news correspondent said violent clashes broke out between Palestinian anti-occupation youths and the Israeli army troops in al-Ram.

The IOF targeted the Palestinian protestors with heavy spates of live bullets and teargas canisters.

A Palestinian lady was hit with a rubber bullet in her head and was rushed to a local clinic for urgent treatment.

Another unidentified woman was also kidnapped by the occupation soldiers from al-Ram.

An Israeli soldier reportedly sustained light wounds in the clashes.

Earlier on Tuesday evening, at least four Palestinian youngsters sustained bullet wounds and a paramedic choked on toxic gas during clashes with the IOF in al-Ram.

Tension has reached a zenith in Occupied Jerusalem after the IOF fatally shot 20-year-old Ali al-Sheyoukhi in Jerusalem’s eastern town of Silwan in overnight clashes.

Army Kidnaps A Palestinian Woman, Injures Another Woman And Scores Of Schoolchildren, In Jerusalem

Dozens of Israeli soldiers invaded, on Wednesday morning, the town of al-Ram, north of occupied East Jerusalem, injured a Palestinian woman, and kidnapped another, in addition to wounding dozens of residents, especially schoolchildren.

The Palestinian News & Info Agency (WAFA) has reported that dozens of soldiers, riding various armored vehicles, invaded the town, and stormed the home of Misbah Abu Sbeih, who was killed by army fire Sunday, and occupied its rooftop, in addition to several nearby homes and rooftops.

The soldiers also fired many concussion grenades, gas bombs and rubber-coated steel bullets, at the residents who gathered near the invaded homes.

The army also clashed with schoolchildren, who were walking to their schools in the town, and injured many of them with rubber-coated steel bullets, while dozens suffered the effects of teargas inhalation.

Palestinian medics rushed to the area, but the soldiers prevented them from entering the town, after declaring it a closed military zone.

In addition, the soldiers assaulted a Palestinian man while walking to a store to buy bread for his children, causing various cuts and bruises.

The soldiers also kidnapped a Palestinian woman, identified as Ghadeer Jamjoum, 35, on the main street of al-Ram, and took her to a detention and interrogation center in Jerusalem.

The town of ar-Ram has been witnessing ongoing clashes, amidst escalating military invasions, since the death of Abu Sbeih.
IOF threatens to turn life in Zabouba into hell on earth

The Israeli occupation forces (IOF) on Tuesday evening threatened to subject the Palestinian natives of Zabouba town, in western Jenin, to collective punishment.

A PIC news correspondent said the occupation soldiers sealed off the main entrance to Zabouba town, in the northern occupied West Bank, and cracked down on the locals as they tried to cross the checkpoint to reach their family homes.

The occupation soldiers further threatened to subject the Palestinians of Zabouba to collective punishment in case of involvement in anti-occupation events and stone-throwing on the Salem military camp built on Palestinian lands in the area.

“We will turn your life into a hell on earth,” one of the soldiers told a Palestinian civilian.

The life of Palestinians in Zabouba town has been marred by the abrupt assaults and aggressive crackdowns launched by the Israeli military forces on a quasi-daily basis.
Israeli Army Injures Four Palestinians In Jerusalem

Israeli soldiers invaded, on Tuesday evening, the town of ar-Ram, north of occupied East Jerusalem, and shot four young men with live fire, during clashes that took place after the army stormed the eastern part of town.

Medical sources said four young men were shot with live fire, especially in the knee area, and were moved a local hospital.

The soldiers invaded various alleys and neighborhoods in the town and chased dozens of young men who clashed with them.

The soldiers also deliberately fired gas bombs on a number of homes, especially while retreating from the town.

Al-Ram has been subject to daily invasions, several times in the same day, since last Sunday’s death of Misbah Abu Sbeih, 39, from the town, who was killed by Israeli army fire after shooting to death an Israeli officer and a woman.

Also on Tuesday evening, the soldiers fatally shot a young Palestinian man, identified as Ali Atef Shiokhi, 20, in Silwan town, south of the Al-Aqsa Mosque in Jerusalem, after the army invaded the town, and clashed with many youngsters who hurled stones at their vehicles.
11 oct 2016
IOF opens fire at Palestinian houses, fishermen in Gaza.

According to the PIC reporter, Israeli forces opened their machinegun fire at Palestinian homes and agricultural lands near Shuhada School in Khuzaa town.

Flares were meanwhile fired into the air, the sources added.

No initial casualties were reported in both attacks.
Army Closes Store Belonging To Abu Sbeih Family 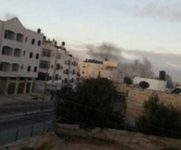 Israeli soldiers invaded, on Tuesday at dawn, the ar-Ram town, north of occupied East Jerusalem, and closed a store of belonging to the family of the Palestinian who was killed two days ago after killing two Israelis, and informed them the closure remains in effect until December 11. Dozens of Palestinians were injured during ensuing clashes.

The WAFA Palestinian News & Info Agency said several Israeli military vehicles invaded the town, and imposed curfew, especially in the area surrounding the home of Misbah Abu Sbeih, 39, and the family store, before placing red wax seal on the door of the family’s candy store, and posted direct orders shutting them until December 11, 2016.

Many youngsters burnt tires to obstruct the invading military vehicles and hurled stones at them, while the soldiers fired dozens of gas bombs and concussion grenades, in addition to dozens of rounds of live ammunition.

The clashes lasted until morning hours, while Red Crescent medics provided treatment to scores of residents, and moved many to local clinics and hospitals.

The invasion and ongoing clashes also prevented workers and students from leaving their homes, and the town itself, especially since the army is still isolating it, completely surrounded many streets and neighborhoods.
Israeli Soldiers Demolish An Apartment In Nablus, Injures Ten Palestinians

Israeli soldiers invaded, on Tuesday at dawn, Beit Forik town, east of the northern West Bank city of Nablus, and demolished an apartment of an imprisoned Palestinian, believed to be behind a shooting attack that led to the death of two Israeli settlers last year.

During the invasion, the soldiers clashed with dozens of Palestinians and injured at least ten.

Media sources in Nablus said the soldiers surrounded Khallet al-Eman area, in Beit Forik, before storming the family home of Amjad ‘Oleiwi, 48, then abducted and detained his family for several hours, and demolished their home.

The sources added that clashes took place between the soldiers and dozens of local youngsters, who hurled stones and empty bottles at the invading army vehicles, while the soldiers fired dozens of gas bombs and rubber-coated steel bullets.

Medical sources said dozens of residents, including many children, suffered the effects of teargas inhalation, and received the needed treatment, while one of them was moved to a hospital, after suffering moderate wounds.

It is worth mentioning that, last week, the Israeli High Court rejected an appeal against the demolition of the ‘Oleiwi family home, and said that the man “had a very serious role in the deadly shooting attack.”

Salah ‘Oleiwi, the brother of Amjad, said the family filed a total of four appeals against the demolition, but were unable to save their home.

The family lived in a residential building in Khallet al-Eman area; the detained Palestinian is a married father of eight; two boys and six girls.

The shooting ‘Oleiwi is accused of planning, took place took place on October 1, 2015, near Itamar Israeli colony, built on Palestinian lands near Nablus. The victims of the shooting have been identified as Eitam Henkin, and his wife Na’ama, both in their thirties.
Army Invades Aida Refugee Camp, In Bethlehem, Injures Three Palestinians 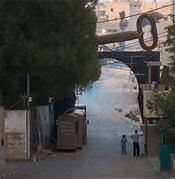 Israeli soldiers invaded, on Monday at night, the ‘Aida refugee camp, north of the West Bank city of Bethlehem, shot and injured three young men with live fire, during clashes that took place in the camp.

Medical sources said the soldiers shot three young men with live fire, and that two of them were shot in their legs, and one in his shoulder, causing moderate injuries.

The clashes took place near Bilal Bin Rabah mosque, at the northern entrance of the refugee camp, after the soldiers invaded it.

Medics rushed to the camp and provided the wounded with the needed medical treatment, before moving them to hospital.

Eyewitnesses said the clashes started after a number of soldiers left the military base, close to the Rachel Tomb area, and invaded the Islamic Graveyard, in the camp.
Arson attacks on Israeli targets in Jerusalem and Bethlehem

A wave of violent events broke out on Monday night in Occupied Jerusalem and Bethlehem, where local young men attacked a police car, power lines, and an electricity facility with Molotov cocktails.

According to the Hebrew website 0404, an Israeli police vehicle was attacked with an incendiary bottle in Silwan district, south of the Aqsa Mosque. No one was injured in the attack.

In Bethlehem, a group of young men attacked the electricity station of Betar Illit settlement in Nahalin town with Molotov cocktails, causing damage to it.