The Israeli occupation forces (IOF) on Saturday night assaulted Palestinian citizens and showered them with tear gas on the main road to Azzun town, east of Qalqiliya province.

They added that the soldiers obstructed the movement of citizens and vehicles on the road and at the entrance to the town.

Meanwhile, a group of Jewish settlers committed acts of bullying against Palestinian citizens on another road near Azzun town, according to eyewitnesses.

Earlier on the same day, the Israeli army reclosed the main road leading to Aqraba town, south of Nablus, a few days after locals opened it.

Eyewitnesses told the PIC that Israeli bulldozers belonging to the army closed the road anew with mounds of dirt and rocks as well as concrete blocks.

The Israeli army had closed the road several months ago, but local residents managed to open it many times.
Army Injures Twenty Palestinians In Al-Jalazoun; Child Fighting For His Life After Head Injury

Dozens of Israeli soldiers invaded, on Saturday evening, the al-Jalazoun refugee camp, north of the central West Bank city of Ramallah, and shot at least twenty Palestinians, including a child who suffered a serious gunshot wound to his head, during clashes that erupted after the invasion.

Medical sources said two Palestinians were shot with live army fire; one of them is a 16-year-old child, who was shot directly in the head, while the other is a young man who was shot in his back.

The child, identified as Fares Ziad al-Bayed, 16, is currently in a very serious condition at the Palestine Medical Complex in Ramallah, the Palestinian Health Ministry said.

At least 18 Palestinians were shot with rubber-coated steel bullets, three of them suffered moderate wounds that required hospitalization, while the rest received the needed treatment by local medics.

An Israeli army spokeswoman confirmed the use of live fire by the soldiers, and claimed she was “aware of reports of injuries, but unable to confirm them.”

She added that Palestinian protesters hurled Molotov cocktails and firebombs at the soldiers, near the entrance of the refugee camp, and the “the army responded with live fire.”

The Palestinians in the camp were commemorating the first anniversary of the death of Ahmad Sharaka, 13, who was shot by an Israeli army bullet in the neck on October 11, 2015.
15 oct 2016
IOF soldiers assault olive harvesters in Nablus village

Eyewitnesses told the PIC reporter that IOF soldiers tried to prevent the farmers from reaping their crops in their land, which is adjacent to Itamar settlement.

However, when the farmers insisted on reaping their olives the soldiers started beating them and forced them to abandon their land under gun threat.
Young man injured by Israeli gunfire in Gaza border area

One Palestinian young man suffered a bullet injury during skirmishes on Friday evening with Israeli soldiers in a border area east of the Gaza Strip.

According to local sources, soldiers at the military outpost of Nahal Oz, east of Gaza city, opened fire and teargassed a group of angry young men who approached the Israeli security fence chanting slogans against the occupation.

One young man was wounded in his leg and rushed to al-Shifa hospital. Others suffered from inhaling tear gas.

Other group of young protesters rallied in a border area east of al-Bureij refugee camp in central Gaza, provoking soldiers into firing live bullets and tear gas canisters from their military watchtowers at them.

No one suffered gunshot injuries. Only several protesters were given on-site medical assistance after they inhaled tear gas. 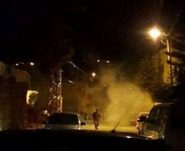 Israeli sources said the soldiers came under Palestinian fire in Qabatia, and that their vehicles were also attacked with pipe bombs, causing two soldiers to suffer mild wounds.

The soldiers also briefly exchanged fire with a number of fighters who attacked the military vehicles in the town.

In related news, the army said its soldiers also came under fire while invading ‘Askar refugee camp, east of the northern West Bank city of Nablus, and that the attack caused no injuries.

The soldiers then invaded and searched homes, and kidnapped at least two young men, identified as Hamdi Khashan and Ala’ Arafat.
Israeli Soldiers Kidnap Five Palestinians in The West Bank

Israeli soldiers invaded, on Friday at dawn, several districts in the occupied West Bank, searched many homes and kidnapped at least four Palestinians, while one child was kidnapped, on Thursday at night, the Palestinian Prisoners Society (PPS) has reported. The soldiers also searched many young men, in the Al-Aqsa Mosque, in Jerusalem.

The PPS said that the soldiers invaded Nablus city, in the northern part of the occupied West Bank, before breaking into and searching many homes, and kidnapped at least two Palestinians, identified as Hamdi Khashan, and Ala’ Arafat.

In addition, the soldiers invaded Qabatia town, south of the northern West Bank city of Jenin, searched homes and kidnapped one Palestinian, identified as Ahmad Naji Abu Zalata, 33, after breaking into his home.

Clashes took place between the invading soldiers and dozens of local youths who hurled stones at the army, while the military fired several gas bombs, rubber-coated steel bullets, and live rounds.

Also in Jerusalem, the soldiers and police officers invaded the Al-Aqsa Mosque in Jerusalem, and searched many young men inside the holy sites, while inspecting their ID cards.

On Thursday at night, the soldiers kidnapped a child, identified as Mahdi Ishaq Sheikh, 15, after stopping him at a military roadblock near Kharbatha al-Misbah village, west of Ramallah, in central West Bank.

The army claimed that the soldiers searched the child, and discovered “he carried a concealed knife.”
13 oct 2016
Israeli Soldiers Open Fire Targeting Homes And Lands In Southern Gaza

Israeli soldiers, stationed on military towers across the border fence, opened fire, on Thursday morning, at several Palestinian homes, and agricultural lands, east of Rafah, in the southern part of the Gaza Strip.

The WAFA Palestinian News Agency has reported that the soldiers fired many live rounds at the homes, and into farmlands, causing damage.

The attack is part of frequent Israeli violations against the Palestinians, their homes and lands, in different parts of the besieged Gaza Strip.
Many Palestinians Injured After Soldiers Fired Gas Bomb At A Wedding Near Jenin

Israeli soldiers invaded, on Wednesday at night, Zabbouba village, west of the northern West Bank city of Jenin, and fired many gas bombs and concussion grenades, some targeting homes, during clashes that took place following the invasion.

The soldiers also attacked a wedding party, causing many to suffer the effects of teargas inhalation.

Hundreds of Palestinians had to leave the wedding party, and the area of the attack, while medics rushed to the site, and provided the needed treatment to dozens of residents.