The Israeli Occupation Forces (IOF) closed Saturday night all the entrance to Azzun town east of Qalqilia and carried out combing operations amid heavy fire of teargas bombs.

The sources pointed out that Israeli forces deployed in large numbers across the apartheid wall in the area.

Two youths were brutally attacked before being detained at the entrance to the town.
Israeli reconnaissance aircrafts fly over Gaza

The sources affirmed that a number of Israeli reconnaissance aircrafts hovered intensively and at a low altitude over Gaza Strip, mainly over its western parts.

Israeli soldiers opened fire, on Saturday morning, on several Palestinian farmers in their own lands, east of Gaza city, while navy shops fired on fishers, northwest of Gaza.

Eyewitnesses said the soldiers, stationed on military towers around the Nahal Oz military base, across the border fence east of the Sheja’eyya neighborhood, east of Gaza city, targeted the lands, and farmers with automatic fire, forcing them out of their lands.

The attack was carried out less than four nautical miles from the shore, and led to damage but no injuries.

The assaults are the latest of daily Israeli violations and attacks targeting Gaza farmers and fishers, in different parts of the coastal region.
21 oct 2016
Dozens of injuries reported during West Bank clashes

At least one young man suffered gunshot injury, while dozens others suffered breathing problems as clashes broke out following Friday prayers in the West Bank and occupied Jerusalem.

Teargas suffocation cases were also reported during the raid, the sources added.

Meanwhile, violent clashes broke out in the afternoon between Israeli forces and local youths in Beit Ummar town, north of al-Khalil.

An Israeli soldier was reportedly injured during the clashes.

An elderly Gazan was shot and injured by the Israeli occupation forces (IOF) in eastern al-Bureij refugee camp, in the blockaded Gaza Strip.

Omar was hit by bullet fire in his right leg and was rushed to the Shuhadaa al-Aqsa Hospital for urgent treatment.

Dozens of peaceful Palestinian protesters rallied in eastern al-Burej before they were targeted by live bullet rounds and teargas canisters randomly unleashed by the occupation army.
Footage shows youth heavily beaten by IOF

19-year-old Haytham Abdul Nasser Seyaj was aggressively beaten by the Israeli occupation forces (IOF) prior to his abduction from his own family home in al-Khalil, a footage shows.

In a video circulated on social media networks, Israeli occupation soldiers appear aggressively beating 19-year-old Seyaj outside of his family home while his parents and relatives kept crying for help.

Seyaj was held in the Palestinian Authority (PA) jails last March after he allegedly attempted to carry out an anti-occupation stabbing attack in an Israeli illegal settlement in Ramallah.

Seyaj started an open-ended hunger strike in the PA Beitouna lock-up in protest at his arbitrary detention.

Seyaj’s story is a remainder of the abduction of the Wael Al-Beitar anti-occupation cell, whose members have been the permanent targets of severe crackdowns by the IOF and the PA.
Israeli Soldiers Kidnap Three Palestinians, Injure Several Others, Near Jenin 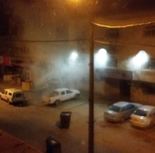 Mustafa Kamil, the head of the Jenin office of the Palestinian Red Crescent Society, said many Palestinians suffered the effects of teargas inhalation, including many who were injured in their homes, after the soldiers fired gas bombs at youngsters who hurled stones and empty bottles on the invading army vehicles.

Kamil added that resident Abdul-Hakim Nassar Zakarna, and his family, including children, suffered the severe effects of teargas inhalation, after one of the gas bombs directly struck their home.

He said the medics rushed to the family home, provided them with the urgently needed medical care, and moved them to a local medical center for further treatment.
Israeli Soldiers Open Fire On Farmers In Southern Gaza, Navy Attacks Fishers In Northern Gaza

Israeli soldiers opened fire, on Friday morning, targeting Palestinian farmers in their own lands, east of Khan Younis, in the southern part of the Gaza Strip, while navy ships opened fire on fishers in northern Gaza.

Eyewitnesses said the soldiers, stationed on military towers across the border fence, fired many live rounds into Palestinian agricultural lands, forcing the farmers out in fear of additional army fire.

In addition, Israeli navy ships opened fire on a number of Palestinian fishing boats, in Gaza waters, in the northern part of the coastal region, forcing the fishers to sail back to shore in fear of additional escalation.
Israeli Soldiers Invade Several Homes In Hebron

Dozens of Israeli army vehicles invaded, on Friday at dawn, various areas in Hebron city, and surrounding communities, in the southern part of the occupied West Bank, stormed and searched homes, and kidnapped several Palestinians.

Media sources in Hebron city said the soldiers invaded and violently searched many homes, interrogated and abducted a number of residents; one of them identified as former political prisoner Hatham Siyaj, from the al-Haqouz area.

The soldiers also fired many gas bombs and concussion grenades in the same area, in addition to invading a home, belonging to members of the al-Hashlamoun family, in the Ras al-Joura area, in Hebron city.

In addition, the army invaded the Sammoa’ town, south of Hebron, before storming a home, belonging to former political prisoner Rasmi al-Mahareeq, and interrogated him along with his family.

During the invasion, the soldiers kidnapped a number of Palestinians, and took them to the Etzion military base and security center.
Several Palestinians Injured In al-Khader 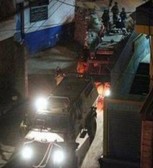 Palestinian medical sources have reported that many residents have been injured, on Thursday evening, after Israeli soldiers invaded the al-Khader town, south of Bethlehem.

The sources stated that the residents, including children, suffered the severe effects of teargas inhalation, and received the needed medical treatment.

Ahmad Salah, the coordinator of the Popular Committee against the Wall and Colonies in al-Khader, said several Israeli army jeeps invaded the town, especially the mosque area in its center, and fired dozens of gas bombs during ensuring clashes.

The invasion into al-Khader was carried out from several directions, there has been no reports of arrests.
Soldiers teargas soccer players of Azzun town in Qalqiliya

Local sources told the Palestinian Information Center (PIC) that soldiers, with no reason, showered Azzun soccer players with tear gas as they were doing routine exercises in the courtyard of Marty Yasser Arafat School in the town.

They added that several players suffered from inhaling tear gas in the unjustified attack.

Meanwhile, another military force erected barriers at the entrance to Azzun town and obstructed the movement of vehicles and passengers