Ninety-five Palestinian civilians, including 43 children, a woman, 2 paramedics and a journalist, were shot and injured by Israeli occupation forces (IOF) fire against peaceful protestors at the 80th Great March of Return (GMR), this Friday, 25 October 2019.

IOF continued to use excessive force against protestors, wounding 36 civilians with live bullets and shrapnel in addition to other injuries in the upper body due to direct targeting with rubber bullets and tear gas canisters.

Thousands of civilians took part in this week’s peaceful protests titled: “For our Prisoners in Israeli Jails and al-Aqsa Mosque,” and they raised the Palestinian flag and chanted national slogans.

The protests lasted from 15:00 to 18:30 and involved activities such as speeches and theatrical performances. Hundreds of civilians protested at varied distances from the border fence across the Gaza Strip, where some protestors set tires on fire and a few of them attempted to throw stones, Molotov Cocktails and firecrackers at the Israeli forces, who responded with excessive force.

According to PCHR’s documentation, the number of victims increased to 214 since the outbreak of the protests on 30 March 2018, including 46 children, 2 women, 9 persons with disabilities, 4 paramedics and 2 journalists. Additionally, 14,453 were wounded, including 3,592 children, 383 women, 250 paramedics and 216 journalists, noting that many of those injured had sustained multiple injuries on separate occasions.

The following is a summary of today’s events along the Gaza Strip border:

Northern Gaza Strip:
demonstrations took part adjacent to Abu Safiyah area protests, northeast of Jabalia, and in southeast of Beit Hanoun. Israeli forces’ attacks against protestors resulted in the injury of 43 civilians, including 20 children, a woman and a paramedic: 20 with live bullets and shrapnel, including 11 children; 14 with rubber bullets, including 5 children and a woman; and 9 were hit with tear gas canisters, including 4 children. Mohammed Abdul Hamid Tawfiq Deeb (24), a volunteer paramedic, was hit with a tear gas canister to the right leg. Israeli forces used a military vehicle that emits the sound of heavy gunfire to cause fear among the protestors.

Gaza City:
IOF shot and injured 10 civilians, including 7 children: 3 with live bullets and shrapnel and 7 with rubber bullets.

Central Gaza Strip:
the area witnessed several shows as hundreds of civilians participated in the engagement celebration of a journalist. Dozens gathered adjacent to the border fence at a range varying between 0 – 300 meters and raised the Palestinian flag. A few of them attempted to throw stones at Israeli forces. IOF shot and injured 11 civilians, including 4 children, a photojournalist: 4 with live bullets, 4 with rubber bullets, and 3 were hit with tear gas canisters. Mahmoud Khalid Mohammed Khattab (26), a journalist from Deir al-Balah, was shot with a rubber bullet to the left shoulder and he received medical treatment in the field.

Khan Younis:
IOF shot and injured 12 civilians, including 4 children, and they were transferred to hospitals: 6 shot with live bullets and shrapnel and 5 with rubber bullets. In addition, many civilians sustained superficial rubber bullet wounds and suffocated due to tear gas inhalation; they received treatment on the spot. A number of protestors set tires on fire adjacent to the border fence.

Rafah:
IOF shot and injured 19 civilians, including 8 children and a paramedic: 3 with live bullet and shrapnel, 10 with rubber bullets, and 6 were hit with tear gas canisters. Ibrahim Mazen Abu Telakh (21), a volunteer paramedic, was directly hit with a tear gas canister to the left shoulder.
Dozens injured as IOF quells Kafr Qaddum protest

The residents of Kafr Qaddum on a weekly basis stage a peaceful demonstration to protest land seizure in favor of settlement construction by Israel and call for opening the village's main road that has been closed for 16 years.

Dozens of Palestinian civilians and solidarity activists were attacked by Israeli troops, who fired tear gas canisters and sound grenades at the weekly, non-violent march against the construction of the Israeli Annexation Wall on village land.

The protest occurs each week on Friday, and is meant to challenge the Israeli military’s takeover of village land.

According to local sources, Israeli soldiers suppressed the marchers and fired tear gas canisters at citizens and their homes, injuring dozens, including women, children and foreign solidarity activists.

According to the group Stop the Wall, Kafr Qaddoum has seen land confiscation and settler violence with 1976, when Israel built the now 3000 inhabitants strong Kedumim settlement that surrounds the village on five hilltops.

The main road from Kafr Qaddoum to Nablus was closed in 2003 for cars and in 2005 closed as well for foot traffic. The people of Kafr Qaddoum entered into years of legal fights and finally in November 2010 got a positive verdict from an Israeli court that the road should be re-opened. However, the Israeli military then stated the road was unfit for use and should therefore stay closed.

Finally, in 2011, the people of Kafr Qaddoum started weekly protests which have been met with heavily violence and intimidation.
Army Causes Family To Suffer Effects Of Teargas Inhalation Near Jerusalem

Israeli soldiers invaded, on Thursday evening, the al-Ezariyya town, southeast of occupied East Jerusalem, and attacked protesters, before firing gas bombs at them, and many surrounding homes, causing a family to suffer the effects of teargas inhalation.

Medical sources said the soldiers fired many gas bombs at random, some striking a house in the town, causing the entire family to suffer the effects of teargas inhalation.

They added that medics rushed to the home and provided the needed treatment to the wounded family.

The soldiers also chased many youngsters in the town and withdrew later without abducting any Palestinians from the town.
Israeli troops desecrate mosque, abduct 8-year old in al-Issawiya

Israeli forces on Thursday evening invaded the town of al-Issawiya in East Jerusalem, desecrated a mosque, and fired tear gas at Palestinian residents of the town.

Local sources told WAFA that a number of heavily armed Israeli soldiers had desecrated their shoes at the Al-Arba’een mosque in the middle of Issawiya, under the pretext of “searching for children.”

Earlier on Thursday afternoon, the Israeli forces abducted Majd Rafat Tariq al-Issawi from the center of the town. video

In addition, Israeli troops installed a roadblock near a home of a deceased Palestinian and started searching cars and interrogating residents
al-Issawiya is one of the towns subjected to a continuous campaign of harassment and abductions of Palestinian residents, as it has been designated as an area for Jewish colonization.

This policy of harassment was recently revealed by a tape leaked from the Israeli police in Jerusalem in which the officers admitted that they harass residents of al-Issawiya for no reason, simply to cause problems for the residents.

The WAFA Palestinian News Agency said the soldiers invaded the Palestinian orchards, near the illegal Aliya colony, which was installed on private lands.

It added that the soldiers fired any gas bombs, and concussion grenades, in addition to assaulting several Palestinians with their batons.

On Wednesday, several colonists attacked many Palestinians picking olive trees in their orchards in Ya’bad town, west of the northern West Bank city of Jenin.

Also Wednesday, the colonists invaded Palestinian orchards in Qaryout village, south Nablus, and forced the residents out, for the fourth consecutive day.

The attacks come while groups of illegal Israeli colonialist settlers continue to invade Palestinian olive orchards, cut trees and assault the villagers, in several parts of the occupied West Bank.

The violations always witness a serious escalation every year during the olive harvest season in occupied Palestine.
Army Demolishes The Home Of A Palestinian Detainee In Ramallah

Israeli soldiers demolished, on Thursday at dawn, the family home of a Palestinian detainee, identified as Islam Abu Hmeid, in the al-Am’ari refugee camp, in the central West Bank city of Ramallah.

The demolition of the property was carried out after the Palestinians managed to rebuild it; it was previously demolished a few times. (Also Read — Abu Hmeid Home: Mass Collective Punishment Targeting Entire Families, As Israeli Army Detonates Home In Ramallah)

It is worth mentioning that Islam’s mother, 73 years of age, has a son, Abdul-Mon’em Abu Hmeid, who was killed by the army on May 31, 1994, in nearby Qalandia refugee camp, in addition to five other sons, imprisoned by Israel, four of them are serving life terms.

Her husband, Mohammad Yousef Abu Hmeid, died in December of 2014, without being able to visit with any of his detained sons, due to what Israeli called “security considerations.”

The army claims that Islam Abu Hmeid, 33, who was taken prisoner on June 6th, 2018, killed an Israeli soldier, identified Ronen Lubarsky, after dropping a slab on his head, on May 24th 2018, during a military invasion into the refugee camp, causing a very serious injury resulting in his death on May 26th.

An Israeli court sentenced Islam to life in prison, in addition to a fine of 258.000 Shekels to be paid to the family of the slain soldier.

Israeli soldiers invaded, on Wednesday at night, the ath-Thaher area, south of Beit Ummar town, northwest of the southern West Bank city of Hebron, and injured several Palestinians who protested the invasion.

He added that many Palestinians, including those in their homes, suffered the effects of teargas inhalation, especially since the soldiers fired at random and in various directions.

All wounded Palestinians received treatment by local medics, without the need to be moved to hospitals or clinics.
23 oct 2019
IOF shoots, arrests Palestinian worker near Tulkarem

A Palestinian young man was injured on Wednesday after Israeli occupation forces (IOF) opened fire at him near a separation wall gate in Zeita town, north of Tulkarem City.

Local sources told the PIC reporter that the IOF shot a Palestinian workman, whose identity has not been known yet, in the leg then arrested him.

The IOF in the recent weeks have shot or arrested dozens of Palestinian workers near the separation wall in Jenin and Tulkarem during their attempts to enter the Palestinian territories occupied since 1948.
Soldiers Shoot A Palestinian At Roadblock Near Jenin 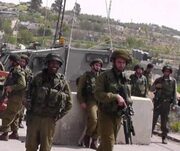 Israeli soldiers shot, Wednesday, a Palestinian man near at Barta’a military roadblock, southwest of the northern West Bank city of Jenin; the Palestinian is the fifth to be shot in the same area in one week.

The Palestinian Red Crescent Society said the soldiers shot Abdullah Hasan Etheimar, 35, from Tulkarem in northern West Bank, with two live rounds in the left ankle and his thigh.

It added that its medics rushed the Palestinian to Khalil Suleiman Governmental hospital, in Jenin, suffering moderate wounds.

The soldiers briefly detained the young man, before allowing Red Crescent medics to provide him with the needed treatment and move him to a hospital.
The Palestinian is the fifth to be shot by the soldiers in the same area in one week.

The wounded Palestinians were not abducted or imprisoned by the soldiers, which indicates that they did not attempt to attack the soldiers or pose any danger to them, otherwise, the army would not allow their release to Palestinian medics.

The Israeli occupation forces (IOF) at dawn Wednesday demolished a Palestinian home in Qalandiya refugee camp, north of Jerusalem, and kidnaped some citizens from their homes in the West Bank.

According to the Qalandiya Media Center, Israeli troops stormed Qalandiya camp and forcibly evicted the family of martyr Hasan Abu Ali from their three-story home before bulldozers embarked on knocking it down.

The soldiers prevented photojournalists from covering the demolition of the house.

Meanwhile, the IOF stormed different areas of the West Bank and kidnaped seven young men at the pretext of their involvement in activities against soldiers and settlers.

The IOF also confiscated dozens of thousands of shekels during its raids on homes in Silwad town in Ramallah.

In a separate incident, local sources in Jenin reported that a Palestinian citizen was injured on Wednesday morning when Israeli soldiers opened fire at him near the Barta’ah checkpoint, without providing further details.