According to Quds Press, Israeli war boats opened their machinegun fire at a number of Palestinian fishing boats off the shores of Gaza.

The fishermen were forced to return ashore. Luckily, no one was injured in the assault.

Meanwhile, Israeli soldiers intensified their presence along the Gaza borders.

Under an inhumane siege, the Israeli army keeps attacking, injuring and killing civilians, farmers and fishermen almost on a daily basis, without any shred of respect for the Egyptian-brokered ceasefire deal in Gaza or even the international law.
IOF arrests two youngsters in Nablus

The two youths were then arrested and taken to a detention center. Beita town was subjected over the past week to a complete closure and tight restrictions.

Violent clashes erupted in Hawara town south of Nablus after Israeli bulldozers closed the main roads in the town.

Eyewitnesses affirmed that the clashes broke out at 6 p.m. when Israeli bulldozers stormed the town amid heavy firing of teargas bombs and erected concrete blocks in the main roads, restricting the locals’ movement.

Commercial shops were also forced to close down. Hawara town has been witnessing almost-daily attacks and raids by Israeli forces under the pretext of protecting the neighboring illegal settlements. Meanwhile, Israeli forces stormed Friday evening Zababda town south of Jenin which led to the outbreak of violent clashes.

Local sources told the PIC reporter that Israeli military vehicles stormed the town before deploying throughout its neighborhoods.

Local citizens were investigated during the raid, which led to a state of tension among them. During the raid, several young men stoned Israeli forces who responded by firing teargas bombs, rubber and live bullets at them. Several injuries were reported during the confrontations.
Injuries reported as IOF quels Kafer Qaddum weekly march

During the march, the participants held photos of Palestinian hunger strikers in Israeli jails and banners calling for their support.

Many Protesters Injured In Kufur Qaddoum

Israeli soldiers attacked, Friday, the weekly protest against the Annexation Wall and colonies in Kufur Qaddoum village, in the northern West Bank district of Qalqilia, causing scores of protesters to suffer the effects of teargas inhalation.

The Popular Committee in Kufur Qaddoum said a large military force, accompanied by armored vehicles and bulldozers, invaded Kufur Qaddoum and assaulted the protesters with a barrage of gas bombs, concussion grenades and rubber-coated metal bullets.

The Committee added that scores of protesters suffered the severe effects of teargas inhalation, and received the need treatment by Red Crescent medics.

The protesters marched in solidarity with all hunger striking Palestinian detainees, especially Mahmoud Balboul and his brother Mohammad, who are facing serious health complications.

They called for massive support, locally and internationally, to the detainees in Israeli prisons and detention centers, especially those holding hunger strikes demanding an end to their illegal Administrative Detention without charges or trial.

Clashes took place between the invading soldiers, and many local youths, who hurled stones and empty bottles on the military vehicles, and burnt car tires in an attempt to block the advancement of the army vehicles.

Last night, several Israeli military vehicles invaded Kufur Qaddoum from many direction, and drove in its neighborhoods, in addition to attempting to ambush many youngsters.

Eyewitnesses told the PIC reporter that dozens of youths gathered near the military site to show their solidarity with Jerusalem Intifada.

However, Israeli forces stationed at the border fence heavily fired teargas bombs and live ammunition at the protesters who in turn tore down a section of the fence.

At least 28 Palestinians in Gaza have been killed by Israeli forces since the outbreak of Jerusalem Intifada last October. The majority of the slain Palestinians were shot dead during protests along the border fence.
IOF opens fire at Gazan farmers, fishermen

The Israeli occupation forces (IOF) on Friday morning opened fire at Palestinian fishing boats off the shores of Khan Younis to the south of Gaza Strip. The fishermen were forced to return ashore.

Luckily, no one was injured in the assault. Meanwhile, Israeli soldiers stationed at the Gaza borders opened their machinegun fire at farmers and fields along the eastern borders of the Strip.

All farmers escaped unhurt from the area, local sources affirmed.

Under an inhumane siege, the Israeli army keeps attacking, injuring and killing civilians, farmers and fishermen almost on a daily basis, without any shred of respect for the Egyptian-brokered ceasefire deal in Gaza or even the international law.
Israeli Navy Kidnaps Five Fishers In Gaza, Confiscates Their Boat

Israeli navy ships opened fired, on Thursday, at a number of Palestinian fishing boats close to the shore in the besieged Gaza Strip, kidnapped five fishers and confiscated their boat.

Zakariyya Bakr, the head of the Fishers Committees at the Union of Agricultural Committees, said the navy ships fired many live rounds towards the boats, west of Wadi Gaza area, less than 4 nautical miles from the shore, and kidnapped five fishers.

The attack is part of frequent violations against the fishers in Gaza waters, in addition to attacks targeting workers and farmers in Palestinian lands across the border fence.
8 sept 2016
Palestinian minor injured during Ramallah clashes

A Palestinian minor was injured Thursday afternoon during clashes which erupted with Israeli Occupation Forces (IOF) in Jalazoun refugee camp north of Ramallah.

Quds Press affirmed that a Palestinian minor was shot and injured with a live bullet in his back during the violent clashes that erupted at the entrance to Jalazoun camp.

The clashes broke out when students left their schools, which led to the injury of some of them.

The confrontations erupted when Israeli forces stormed the refugee camp amid heavy firing of teargas bombs.

Violent clashes erupted Thursday afternoon in Aroub refugee camp north of al-Khalil between local youths and Israeli Occupation Forces (IOF) who stationed in large numbers at the entrance to the camp.

Israeli forces also stormed Ras Joura neighborhood and broke into a number of local shops southeast of the city.
Israeli Soldiers Kidnap Seventeen Palestinians In The West Bank, Injure One In Gaza 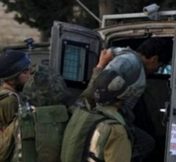 The Palestinian Prisoners Society (PPS) has reported that Israeli soldiers have kidnapped, on Wednesday evening and at night, and earlier on Thursday, seventeen Palestinians, including two children, in the occupied West Bank. The soldiers also shot one Palestinian in Gaza.

The Jerusalem office of the PPS said the soldiers kidnapped five Palestinians, including two siblings and two children.

The PPS said that resident Mohammad Jihad Za’tary, 19, from Silwan town, in occupied East Jerusalem, was kidnapped from his work in Pisgat Zeev.

On Wednesday at night, the soldiers kidnapped two children, identified as Fathi Nasser and Mustafa Abu Bakr, members of a scout troupe that was preparing for a campaign to clean the Al-Aqsa Mosque.

The two children were placing campaign posters on a number of walls, preparing for an activity that is planned for Friday, ahead of the Al-Adha Muslim feast.

In addition, the soldiers invaded Surif town, searched homes and kidnapped Anan Abdul-Hamid Ekhlayyel, 21, and Mohammad Hasan ‘Aadi, 22.
The soldiers also invaded the home of Yahya Saleh, searched his property and summoned him for interrogation in the Etzion military base and security center.

In the Nablus district, in the northern part of the West Bank, the soldiers kidnapped two Palestinians, identified as Ismael Mohammad Kalbouna, 21, and Hisham Mohammad Bishkar, 21.

Also on Wednesday evening, the soldiers invaded Qabatia town, south of the northern West Bank city of Jenin, and kidnapped one Palestinian, identified as Sabri Kamil, after breaking into his home and searching it.

In the Gaza Strip, the soldiers, stationed on military towers across the border fence, shot and injured an 18-year-old Palestinian in Abu Safiyya area, east of Jabalia, in the northern part of the coastal region.
Israeli Air Force responds to mortar spillover, hits Syrian positions

After mortar fire spilled over into the Golan Heights as a result of the Syrian civil war on Wednesday, the Israeli Air Force hit targets in Syria; IDF: 'we will not accept any violation of Israeli sovereignty.'

The Israeli Air Force attacked Syria in the early hours of Thursday morning following spillover from the fighting in Syria.

Several mortars were fired into Israel on Wednesday afternoon, hitting the northern Golan Heights. No injuries or damage was reported.

They hit a Syrian artillery position located across the border on in the Northern Syrian Golan. The IDF has expressed that it views the Assad regime as responsible for anything that happens or is shot from Syrian territory, and will not accept any violation of Israeli sovereignty or threat to the security of Israeli citizens.

No special instructions or alerts were given to Golan Heights residents, and life is continuing as normal there.

Spillover of mortars into the Golan Heights occurred earlier this week as a result of the Syrian civil war. There were no injuries or damage reported during the incident. The IDF hit Syrian Arab Army artillery positions in response.

Following the spillover at the beginning of the week, a high ranking Syrian official told Syrian news sources that "the Israeli enemy continues to support terror organizations and has attacked (Syrian forces) in the area of Kafr Hader with two missiles which were shot by Israeli drones, causing damage."

The Syrian official didn't say anything about wounded or killed in the attack.