At least eight Palestinian civilians were kidnapped by the Israeli occupation forces (IOF) at the break of dawn on Sunday following assaults on the occupied Palestinian territories.

The occupation troops reportedly wreaked havoc on civilian homes, including the family home of the slain Palestinian Khaled Jawabreh. The list of captives included, Seif, the nephew of slain Muhammad Aziz Rushdi.

Clashes burst out in the area, where the Israeli army patrols attacked the Palestinian protesters with randomly-unleashed waves of teargas canisters.

The IOF further stormed Nablus at predawn time and sealed off the main access roads to the Palestinian towns of Hawara, Beit, Ourata, and Odla.

At the same time, the IOF soldiers broke into Jenin’s southern corners and subjected Palestinian locals to intensive interrogation, before they sealed off the area with military checkpoints.

A PIC news reporter said seven Israeli military patrols deployed at the Jalama crossroads, to the north of Jenin, stormed Qabatiya and Merka, to the south, and raked through residential neighborhoods.

Another sweep launched by the IOF in Occupied Jerusalem culminated in the abduction of three Palestinian youngsters from the Shua’fat refugee camp, to the northeast. Violent clashes burst out shortly after the assault, as Palestinian civilians expressed their protest at such arbitrary abductions.

The IOF showered Palestinian civilian homes with teargas canisters all the way through the assault. A spy balloon kept, meanwhile, soaring over Occupied Jerusalem moments before the sweep.
Army Kidnaps Three Palestinians In Shu’fat Refugee Camp, In Jerusalem 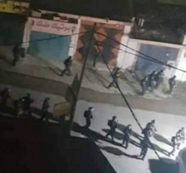 Local sources said that the soldiers invaded the homes of Anas Rajabi, Fayez Hamdan Masalma and Ibrahim Omar Lutfi, and abducted them.

The sources added that the invasion and abductions led to clashes between the soldiers and dozens of local youths who hurled stones at the military vehicles.

It is worth mentioning that the army deployed surveillance balloons to monitor the camp before dozens of soldiers invaded it.
24 sept 2016
IOF arrests 3 youths in Ramallah town

The Israeli forces claimed that the three detainees were involved in stone-throwing attacks.
Israeli and Egyptian navies open fire at Gaza fishermen

Israeli and Egyptian gunboats on Saturday opened machinegun fire at Palestinian fishermen off the northern and southern shores of the Gaza Strip.

According to Quds Press, the Israeli navy opened fire at Palestinian fishermen off the coast of Gaza City.

Simultaneously, a similar gunfire attack was carried out by Egyptian naval troops off the coast of Rafah, north of Gaza.

The Egyptian navy had opened fire several times before at Palestinian fishermen, with no reason. Luckily, none of the fishermen was hurt in the shooting attacks.
6 arrests in Nablus, clashes erupt in Jenin

Israeli forces stormed the city in large numbers after closing all the entrances leading to it and neighboring checkpoints, preventing people’s movement in both directions.

Eyewitnesses told the PIC reporter that the clashes broke out when several Israeli military vehicles broke into Kafer Qalil town southeast of the city.

At least five arrests were reported during the clashes. Another young man was detained at a military checkpoint erected between Nablus and Tulkarem.

All the detainees were taken to unknown detention centers. Similar clashes erupted in Zabouba town west of Jenin where tension is still simmering for more than two weeks. 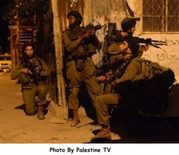 Mahmoud Sa’adi, the head of the Emergency Unit of Palestinian Red Crescent Society in Jenin, said clashes took place between the invading soldiers and many local youths, who hurled stones at the army vehicles, while the soldiers fired many gas bombs, some hitting homes.

Sa’adi added that the medics, who rushed to the scene, provided medical treatment to the families of Adel Ahmad Jaradat and Khalil Ibrahim Jaradat, after the gas bombs struck their homes and their yards.
23 sept 2016
Dozens choke on tear gas as IOF quels Kafr Qaddum march

Local activist Murad al-Shteiwi affirmed that heavily-armed Israeli forces attacked the march with a barrage of teargas bombs, which led to the outbreak of violent clashes.

Dozens choked on tear gas, he added. Local youths responded by throwing stones and empty bottles at the soldiers.

Israeli forces, for their part, closed the main road leading to the town with sand barriers as part of their collective punishment against the locals.
Four young protesters wounded by Israeli gunfire east of Gaza

Four Palestinian young men on Friday afternoon suffered bullet injuries, two of them seriously, when Israeli soldiers opened fire at them in different border areas east of the Gaza Strip.

Four young men were wounded by Israeli gunfire during skirmishes with soldiers east of al-Bureij and near Nahal Oz crossing.

Every Friday, young people from Gaza organize rallies near the border security fence to protest Israel's ongoing violations and crimes against the Palestinians and their holy sites.
Soldiers Injure A Young Man Near Ramallah, Assault A Physically Challenge Man Near Jenin

Israeli soldiers shot and injured, Friday, a young Palestinian man with live fire east of the central West Bank city of Ramallah, while a number of soldiers assaulted a physically challenged man at a military roadblock near Jenin, in the northern part of the West Bank.

Medical sources said the soldiers invaded an area close to Yabroud bridge, between Silwad and Yabroud towns, east of Ramallah, and clashed with many locals.

The soldiers fired several live rounds, rubber-coated steel bullets and gas bombs, causing many to suffer the effects of teargas inhalation, and wounding a young man with a live round in is leg.

Eyewitnesses said the soldiers repeatedly struck the young man, identified as Suleiman Zalafa from the Jenin refugee camp, “for approaching the roadblock before being order to.”
Army Injures A Palestinian Child In Hebron 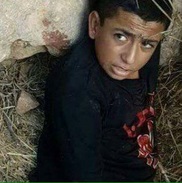 Israeli soldiers shot, on Friday, a Palestinian child near Keryat Arba’ illegal colony, east of Hebron city, in the southern part of the occupied West Bank, after he reportedly attempted to stab an Israeli soldier.

Israeli sources said “the soldiers shot the child, 14 years of age, in his abdomen, causing moderate-to-serious wounds, after he attempted to stab a soldier.”

The sources said no soldiers were hurt in the reported incident, and that the soldiers are looking for another Palestinian, who accompanied the child, and ran away after the shooting.
IOF opens fire at shepherds in central Gaza

On a near-daily basis, Israeli forces target Palestinian fishermen, farmers, and shepherds entering the Israeli-enforced “buffer zone” on land and sea, implemented after Israel imposed a blockade on the Gaza Strip nearly a decade ago.
Israeli Soldiers Kidnap Eight Palestinians In Bethlehem

The home invasions were first carried out by undercover Israeli soldiers, before the army invaded the neighborhoods, and took the kidnapped Palestinians away.

Sep 23, 2016 @ 09:40: The Bethlehem office of the Palestinian Prisoners Society (PPS) said the soldiers broke into and searched many homes in the refugee camp, and kidnapped the six Palestinians.

Clashes took place between the invading soldiers and many local youths, who hurled stones at the armored military vehicles, while the soldiers fired gas bombs and concussion grenades.

Halawani said that one of the officers beat her while she was leaving the holy site after the Maghrib prayer, according to Al Ray.

She explained that the period for the expulsion order against her has ended; however, Israeli police ordered all members to bar her from entering the mosque.

Halawani was able to enter al-Aqsa on Wednesday evening, as the period of expulsion, which lasted for a year, is ended.
Clashes, injuries as Israeli fanatics storm Joseph’s Tomb

A number of Palestinian civilians were left injured on early Thursday morning as hundreds of Israeli fanatic settlers stormed at dawn on Thursday Joseph’s Tomb, in eastern Nablus province, under a heavy police escort.

The Israeli occupation troops closed the Amman Street, adjacent to Joseph’s Tomb, and climbed over the rooftops of civilian homes.

At the same time an Israeli reconnaissance drone kept hovering over the territory at a low altitude all the way through the break-in.

Clashes reportedly burst out near the Askar and Balata refugee camps. Two Palestinian youngsters sustained injuries during the clashes.

Youngster Muhammad Hashash was rushed to a local clinic so as to be urgently treated for the bullet injuries sustained in his leg.

Several Palestinian families at the Balata refugee camp choked on teargas in the assault.

Recently, Israeli fanatic settlers published an ad on a private website mobilizing mass participation in break-ins at Joseph’s Tomb at least once every couple of weeks.

Three more youngsters were kidnapped by the occupation troops in the assault. The Israeli forces chased down a number of Palestinian workers on their way to their workplaces and showered the area with randomly-unleashed spates of bullet fire.
Israeli Soldiers Injure One Palestinian, Kidnap Another, In Nablus

Israeli soldiers shot and injured, on Thursday at dawn, a young Palestinian man, and kidnapped at least one, after the army and settlers invaded the eastern area of Nablus, in the northern part of the occupied West Bank.

Media sources in Nablus said fourteen Israeli buses, and many army vehicles invaded the city, and headed towards Joseph’s Tomb, east of Nablus.

Clashes took place between the soldiers and many local youngsters, who hurled stones and empty bottles at the invading vehicles, while the soldiers fired life rounds, rubber-coated steel bullets, gas bombs and concussion grenades.

One Palestinian was shot with an exploding bullet in his leg, and was moved to a hospital in Nablus, suffering a moderate injury, while many others suffered the effects of teargas inhalation.

The soldiers also kidnapped another Palestinian, and took him to an unknown destination.

Also, a large number of wood boards were burnt after a number of Israeli gas bombs, and concussion grenades, were fired into a carpentry workshop.

The clashes were mainly focused in the al-Hisba Street area, Amman Street, and the northern entrance of Balata refugee camp, where many youngster burnt tires and hurled empty bottles and Molotov cocktails at the military vehicles.

Firefighters rushed to the area and extinguished the fire before its spread into a larger area.