A Palestinian young man sustained wounds at noon time on Wednesday after the Israeli occupation forces (IOF) stormed al-Tour neighborhood, in eastern Occupied Jerusalem, and cracked down on Palestinian schoolchildren.

A PIC news correspondent said clashes burst out shortly after the IOF broke into the al-Tour area and chased down Palestinian pupils.

A youngster was injured in the head in the attack and was rushed to the al-Makasid Hospital for urgent treatment.

Similar attacks launched a few hours earlier by the IOF on Palestinian schoolchildren in Jerusalem’s eastern towns of Abu Dis and Silwan culminated in five suffocation cases among the Palestinians as a result of teargas inhalation.

A young Palestinian man from occupied East Jerusalem remains in Intensive Care Unit at the al-Makassed hospital, in Jerusalem, after suffering a serious injury, Wednesday, when Israeli soldiers shot him with a concussion grenade in the face.

The young man, Mohammad Hussein Khweiss, 20, was on his way to Al-Makassed for a checkup as he was suffering from back pain, but while heading there, the soldiers invaded a school in the at-Tour town, in Jerusalem, to kidnap a student, and fired concussion grenades.

Khweiss was shot in the head and face as he was passing by the school when the soldiers fired another concussion grenade at him while they were withdrawing from the school.

After being shot, the Palestinian instantly lost consciousness, before Palestinian medics rushed him to al-Makassed.

One of the doctors who are treating the wounding Palestinian said Khweiss suffered fractures in the lower part of his skull and in his forehead, in addition to cuts and bleeding from one of his ears, and several broken teeth.
Clashes break out in Nablus village

Violent clashes broke out in Beit Furik town east of Nablus on Thursday afternoon between Israeli occupation forces and local youths. No initial injuries were reported during the confrontations.

Dozens of Israeli soldiers invaded, Thursday, the Hamsa al-Fouqa area, near Tubas in central West Bank, and removed 19 Bedouin families from their dwelling, so that the army can conduct life fire training in their community.

The soldiers surrounded Abu Hamsa al-Fouqa area before invading it, and handed the military orders for the families before removing them.

The planned military drills, which will use live fire and artillery shells, will be held today, and again on Friday morning for five hours, starting at six in the morning. 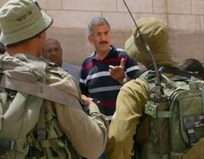 Dozens of Israeli military vehicles and jeeps invaded, on Thursday, Hebron city and several nearby areas and towns, searched many homes and installed roadblocks.

Owners of some of the invaded homes have been identified as Yousef Abu Daoud, Hamza Abu Daoud, Roshdi Qneibi, Ali Olama’, in addition to al-Qasrawi and Edrees families.

In Beit Awwa town, west of Hebron, the soldiers invaded one home, belonging to Shehda Masalma.

In addition, the soldiers installed roadblocks leading to the towns of Ethna, Bani Neim and Beit Ummar, before stopping and searching dozens of cars while inspecting the ID cards of the passengers, and interrogated many of them.
Israeli Soldiers Open Fire On Palestinian Farmers In Central Gaza

Israeli soldiers opened fire, on Thursday morning, on several Palestinian farmers, working on their own lands, east of Deir al-Balah, in central Gaza.

The farmers said the soldiers, stationed across the border fence, fired many live rounds, forcing them to leave their lands in fear of additional escalation and army fire.

The soldiers attacked the farmers while stationed on their military towers, across the border fence surrounding the Kissufim army base, southeast of Deir al-Balah.

A Palestinian workman, from Qaryut village in Nablus, suffered serious fractures when Israeli soldiers chased him during his attempt to enter an Israeli occupied area to look for a job. 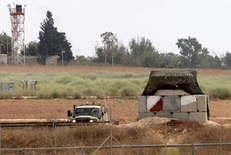 Israeli soldiers, stationed across the border fence with Gaza, opened fire into Palestinian lands and a number of homes in Khan Younis, in the southern part of the Gaza Strip. Navy ships also fired on fishing boats near the Gaza shore.

Media sources said the soldiers, stationed on military towers across the border fence, east of the Gaza Strip, fired several live rounds into the lands, and homes, in Khan Younis.

Israeli settler gangs set fire to a Palestinian home in Nablus at predawn time on Monday at the same time as several Palestinians were kidnapped by the occupation army from West Bank provinces.

Civil defense crews said they received reports of wildfires at 11:53 p.m. and rushed to the scene to put out the fire.

Meanwhile, the Palestinian youngster Maraseel al-Sawalhi was kidnapped by the Israeli occupation soldiers from his family home in al-Ein refugee camp, to the west of Nablus.

The occupation army has sealed off the main entrances to Odla, Ourata, and Beita towns, in southern Nablus.

At the same time, an Israeli military force rolled into the northern occupied West Bank province of Jenin and raked through residential neighborhoods in Yabad town, to the south.

The Israeli patrol set up a series of ambushes and cracked down on Palestinian passengers. Tension has been running high in Jenin after the Palestinian detainee Yasser Hamdouni, hailing from the city, was announced dead in an Israeli jail due to medical neglect.

Violent clashes also flared up in Yabad’s eastern corners, where sounds of bullet fire have been detected all the way though the break-in.

The occupation troops further wreaked havoc on industrial workshops in Jenin in search for lathes allegedly used for manufacturing arms.

The assault culminated in the abduction of ex-prisoners Muhammad Harb and Bahaa Salama shortly after the occupation troops ravaged their family homes.

The Israeli soldiers reportedly stormed Masliyah town, in southern Jenin, and broke into civilian homes, before they sealed off the main access road to the town with a military checkpoint.
Israeli Soldiers Injure One Palestinian, Kidnap Six Others, In Jenin

Dozens of Israeli soldiers invaded, on Monday at dawn, different parts of the northern West Bank city of Jenin, searched many homes and property, and kidnapped six Palestinians, in addition to shooting and wounding one.

Medical sources said the soldiers shot a young man with a live round in one of his legs, while many Palestinians suffered the effects of teargas inhalation, during clashes that took place after the army invaded the city.

The clashes erupted in different neighborhoods throughout the city, after the soldiers invaded them, and started searching homes.

The soldiers also searched many homes and interrogated the families; owners of some of the invaded homes have been identified as former political prisoner Mohammad Abu Naseef, Mahmoud Awartani, his brothers Mohammad, Mo’taz Hani and Bara’, in addition to Jihad al-Hanthawi, Mohammad Abu Sirryya and Bassam ‘Arqawi.

The soldiers wanted to kidnap the former political prisoner, Abu Naseef, but he was not at home during the invasion.

A Palestinian citizen was rushed to hospital on Sunday to be treated for injuries sustained shortly after he was arrested by the Israeli occupation forces (IOF) in Salfit province.

A PIC news correspondent said the Palestinian citizen Amer Youssef Abdullah was arrested by the IOF after he protested over the bulldozing of his olive orchard by Israeli settlers in eastern Deir Balout town, to the west of Salfit.

The captive was announced injured moments after he was dragged by the IOF to an Israeli military jeep near the bulldozing scene.