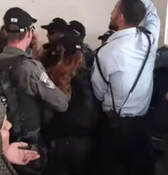 Staff of the so-called Israeli Municipality of West Jerusalem demolished a Palestinian house under construction in Mount of Olives neighborhood in occupied Jerusalem, said witnesse.

They said municipality staff, backed by Israeli police, cut the iron columns and destroyed the roof of the house owned by Issa Khalil.

Israeli police reportedly detained the owner and his brother after physically assaulting members of the family who were present at the house. video

Israeli Soldiers Demolish A Home, Assault The Family, In Jerusalem

Workers of the City Council of occupied East Jerusalem and Israeli soldiers demolished, Tuesday, an under-construction Palestinian home in the at-Tour town, allegedly for being constructed without a permit, and assaulted the family before detaining two of them.

Resident Abu Issa Khalil said the soldiers, and personnel of the City Council stormed the home after surrounding and isolating it, and assaulted his family, before abducting his sons Qussai and Issa.

It is worth mentioning that the two detained sons were interrogated for several hours at a detention facility, and were released under the condition of being forced out of Jerusalem for 48 hours.

He added that the soldiers alleged that his sons “assaulted them”, while they were forcing the family out, and attacked his other son, Odai, causing various cuts and bruises, before he was rushed to a hospital in Jerusalem.

The Palestinian stated that the soldiers demolished his residence using handheld tools because it is on the top third floor.

Khalil also said that the City Council recently informed him that he has until Monday evening to demolish the residence, and he demolished its rooftop, however, the soldiers invaded the area, Tuesday, and demolished the remaining walls.
Israeli army launches limited incursion into Gaza

The Israeli occupation army on Tuesday morning carried out limited incursions into the northern and central areas of the Gaza Strip. 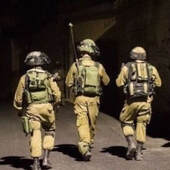 Israeli forces, today, stormed the Hebron headquarters of the Union of Palestinian Women Committees and seized computer hard discs and other equipment, according to Sara Mtair, director of the Hebron office of the Women Committees.

She said, according to WAFA correspondence, that Israeli soldiers raided her office  early this morning,  in this southern West Bank city, ransacking it and seizing a camera and a number of computers, while trashing files and damaging furniture.
Settlers break into Joseph’s Tomb in Nablus, clashes erupt with residents

A number of Palestinians today suffered from suffocation during clashes with Israeli forces who secure a break in by fanatic settlers into Joseph’s Tomb in the northern West Bank city of Nablus, according to security and medical sources.

They told WAFA that residents clashed with the soldiers who sealed off the Palestinian area to secure the visit of the settlers into the site resulting in 10 injuries mainly from suffocation due to inhaling teargas fired by the soldiers. The casualties were locally treated. video

About 1200 extremist settlers broke into the site early in the morning, heavily protected by the Israeli forces and accompanied by Rafi Peretz, Israeli Education Minister and Yossi Dagan, a settler leader. video

Israeli soldiers invaded, on Monday evening, Beit Ummar town, north of the southern West Bank city of Hebron, abducted one child and injured many other Palestinians in the ath-Thaher area.

Local media activist Mohammad Awad, said the soldiers invaded the ath-Thaher area of the town, near the illegal Karmie Tzur colony which was built on Palestinian lands south of the town, and fired a barrage of gas bombs and rubber-coated steel bullets at protesters and homes.

Awad added that many Palestinians suffered the effects of teargas inhalation and received the needed treatment.

The soldiers also broke into a blacksmith workshop, owned by Jihad Ali Sabarna, and abducted his son, Mohammad, 15.

Israeli forces stormed an archaeological site in the town of Sabastia, to the northwest of Nablus, leading to violent confrontations, said a local official.

Mayor of Sabastia, Mohammed Azzem, said that dozens of soldiers raided the site amid the firing of live bullets and tear gas canisters toward residents, provoking conflict.

No injuries or arrests were reported by WAFA correspondence.

The mayor noted that the town has been subjected to repeated attacks and near daily raids, by Israeli forces and settlers.
PPS: “Israeli Soldiers Abduct 45 Palestinians In West Bank”

The Palestinian Prisoners’ Society (PPS) has confirmed that Israeli soldiers abducted, on Monday at dawn, at least 45 Palestinians from several parts of the occupied West Bank, including twenty-two from the al-‘Isawiya and Silwan towns, in occupied East Jerusalem.

The PPS said dozens of soldiers and police officers, including military and police intelligence Units, invaded al-‘Isawiya and Silwan town in Jerusalem, before storming and ransacking dozens of homes.

It added that the invasions and violent searches included the use of K9 units and that the soldiers also interrogated dozens of residents while inspecting their ID cards and violently searched their homes and property.

It is worth mentioning that, for the third month in a row, al-‘Isawiya has been subject to daily invasions, abductions, violent searches of homes and properties, excessively high fines and fees, in addition to several demolitions of homes and structures.

Silwanic added that the soldiers and police officers invaded many neighborhoods in Silwan, ticketed cars and other vehicles, in addition to imposing fines on shop owners, and interrogated many Palestinians while inspecting their ID cards.

During the invasions, the soldiers fired many gas bombs and concussion grenades at Palestinian protesters but did not cause injuries.

In Ramallah governorate, in central West Bank, the soldiers abducted four Palestinians in the neighborhoods of al-Masyoun and al-Masayef, in addition to Birzeit and Durham towns, north of the city.

Two of the abducted Palestinians, Yazan Maghames, from Birzeit, and Bassel Filyan, from Burham village, north of Ramallah, are students of Birzeit University.

In Tulkarem, also in northern West Bank, the soldiers abducted Amjad Wa’el E’mayyer, 31, Mohammad E’mayyer, 39, and Ali Younis Abu Younis, 46, from their homes in Bal’a town, east of the city, in addition to abducted Yousef Ghaleb Hannoun, from Anabta town, east of Qalqilia, while crossing a military roadblock near Jeet village.

The soldiers invaded many neighborhoods in Hebron city, in addition to Yatta and Beit Awwa towns, and installed roadblocks on main roads leading to the northern and southern parts of Hebron city, in addition to Sa’ir and Halhoul towns, before stopping and searching dozens of cars while examining the ID cards of the passengers.
Army Abducts Four Palestinians, Injures Many Others, In Ramallah

They added that many Palestinian youngsters protested the invasions, and hurled stones at the army jeeps, while the soldiers fired a barrage of gas bombs, concussion grenades, and rubber-coated steel bullets.

Medical sources said several Palestinians suffered the effects of teargas inhalation, in addition to cuts and bruises, and received the needed treatment.

The army invaded and searched homes, before abducting Yazan Maghames, a university student from Birzeit.

Another university student was abducted from his home in Burham village, north of Ramallah.
Two paramedics injured in IOF attack in Eizariya town

Two Palestinian paramedics on Sunday evening suffered injuries after soldiers targeted them as they were doing their job during skirmishes between local youths and  with the Israeli occupation forces in Eizariya town in Occupied Jerusalem.

The Red Crescent said that two of its paramedics were rushed to the Makassed emergency unit to receive medical assistance, adding that one of them was hit by a tear gas canister in his face and the other had a foot injury from a rubber bullet.

Media sources said the soldiers invaded the village and started stopping the Palestinians and their cars on its main road.

They added that the soldiers searched many cars and interrogated the Palestinians while inspecting their ID cards.

At least six Palestinians were injured by Israeli forces today during an Israeli army raid of the town of Azzun, near the city of Qalqilia in the occupied West Bank, according to local sources.

He said the soldiers fired live bullets and rubber-coated rounds at the protesters to disperse them, injuring six, two of them by live gunshots. video video

Radwan added that the wounded were treated at the scene by local medics.

During the raid, he continued, the soldiers encircled a mosque in the town and prevented worshipers from attending the sunset prayer.
16 citizens injured in IOF attack on Eizariya town in J’lem

The Red Crescent said its ambulance crew provided medical assistance to 16 citizens in Eizariya after they suffered different injuries.

Earlier on the same day, hundreds of Palestinian citizens marched in the funeral procession of 14-year-old Naseem Abu Rumi after the Israeli occupation authority decided to release his body.

A general strike was declared in the town in mourning for Abu Rumi.

Abu Rumi was shot dead on August 15 at al-Silsila Gate of the Aqsa Mosque after he carried out a stabbing attack and injured a police officer. Another child who was walking with him was also injured on the scene.

At least six Palestinians suffocated by tear gas during an Israeli army raid into the town of al-Izzariyeh, east of occupied Jerusalem, said local sources.