“The Great March of Return” 270 killed

Israeli sources have confirmed that the wounded Palestinian woman, who was shot by the soldiers after an alleged stabbing attempt, has died from her injuries.

The slain Palestinian woman was later identified as Ala’ Nafeth Wahdan, 25, from Qalandia refugee camp.

After she was shot, she was left bleeding for a long time, before an Israeli ambulance moved her to Hadassah Israeli Medical Center in Jerusalem, where she succumbed to her wounds.

Israeli daily Haaretz has reported that the soldiers saw the woman and ordered her to stop, “but she did not heed to their commands, and pulled out a knife before the soldiers shot her.

Following the incident, the soldiers closed the terminal and maced many Palestinians with pepper-spray while trying to remove them from the area.

Israeli soldiers shot, on Wednesday morning, a Palestinian woman near Qalandia Terminal, north of occupied East Jerusalem, reportedly for carrying a knife with the intention of stabbing them.

Israeli media sources claimed the young woman attempted to stab the soldiers before they shot her. So far, the extent of her injuries remains unknown.

A video filmed by a Palestinian bystander shows soldiers several meters away from the woman before one of them shot her, then a soldier approached her and kicked an object away from her.

The soldiers then closed the area and ordered the Palestinian cars away.

Israeli sources have confirmed that nobody else was injured in the incident and added that an army probe is underway.

Following the incident, the soldiers closed the terminal, and maced many Palestinians with pepper-spray while trying to remove them from the area. video video
8 sept 2019
Palestinian Prisoner Dies in Israeli Jail

The commission held the Israeli government fully responsible for the racist crimes committed against Palestinians, including the physical and psychological torture and medical negligence of prisoners, among other violations, calling for an investigation into these crimes.

The death of al-Sayyeh brings the number of Palestinian prisoners who died in Israeli jails since 1967 to 221 prisoners.

At least 700 Palestinian prisoners in Israeli jails suffer from serious health conditions, 160 of whom are in need of urgent medical follow-up.

Palestinians have accused the Israeli authorities of failing to provide proper medical treatment, or of delaying treatment to ill prisoners, causing a deterioration in their health.

According to Addameer Prisoners Support and Human Rights organization, “in regard to adequate medical attention and treatment, Article 91 [of the Fourth Geneva Convention] emphasizes that “every place of internment shall have an adequate infirmary…” and that “Internees may not be prevented from presenting themselves to the medical authority for examination.”

In addition to this article, Article 92 asserts that “Medical inspections of internees shall be made at least once a month…”. It is evident that the withholding of treatment, or access to a medical professional, is a violation of these specific provisions, and therefore a violation of international humanitarian law.”
6 sept 2019
Israeli forces kill two Palestinians, injure many others at Gaza border 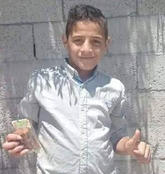 At least two Palestinians were killed and over 37 others injured today by live bullets or rubber-coated rounds as Israeli forces attacked thousands of protesters taking part in the weekly Great March of Return at Gaza-Israel border, according to medical sources.

Soldiers manning the separation fence fired live bullets and rubber-coated steel rounds at the protesters who gathered at many encampments along the border, killing Ali Sami Ashqar, 17, and another man who was not yet identified. 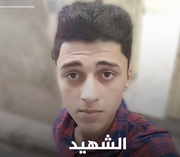 At least 37 protesters were also injured by live bullets, including two medics and a photojournalist. video

Some of the wounded were moved to hospital and many others were treated in the field hospitals. video video

Over 310 Palestinians have been killed and about 18,000 others injured by Israeli forces since the outbreak of the Great March of Return protests at Gaza border on March 30, 2018.

The weekly protests call for lifting the Israeli blockade of the Gaza Strip and for the return of the Palestinian refugees to their ancestral homes in pre-1948 Palestine.
31 aug 2019
Palestinian young man shot at Gaza protest dies of injury

A Palestinian young man was proclaimed dead on Saturday morning after he succumbed to a bullet injury he sustained the day before when Israeli soldiers quelled a protest rally staged on the eastern border of the Gaza Strip.

According to a local medical source, 25-year-old Bader Mousa, from al-Yabani neighborhood in Khan Younis, suffered a serious bullet injury in his head after an Israeli sniper shot him during his participation in a March of Return protest held on Friday in the east of Khan Younis in southern Gaza.

Several Palestinian protesters suffered bullet injuries and from their exposure to tear gas fumes when the Israeli occupation forces violently attacked their border rallies on Friday.

According to the Palestinian health ministry in Gaza, 42 citizens was injured by live ammunition during the protests.
28 aug 2019
Three killed, others wounded in Gaza blasts

The targeted checkpoints are located at the junctions of al-Dahdouh and al-Zahara, west of Gaza City.

According to the health ministry in Gaza, the slain officers are Wa’el Khalifa, 45, Salama al-Nadeem, 32, and Alaa al-Gharabli, 32.

Consequently, the interior ministry declared a state of emergency throughout Gaza, putting security forces on alert, and launched immediate investigations into the attacks.

Two Palestinians have lost their lives when Israeli military aircraft launched a new round of airstrikes against the besieged Gaza Strip as the Tel Aviv regime presses ahead with its acts of aggression against the impoverished Palestinian coastal sliver.

The spokesman for the Gaza Ministry of Health, Ashraf al-Qidra, said in a statement that two people were killed while three others, including a woman, sustained injuries in the airstrike. video 18+

Moreover, the Gaza-based Ministry of Interior and National Security stated that the incident happened at the al-Dahdouh junction in the southern part of the Gaza City.

The strike came hours after an Israeli fighter jet targeted a position of the Palestinian Hamas resistance movement in the central part of the Gaza Strip.

There were no immediate reports of casualties and the extent of damage caused.

The military claimed that the strike was carried out after four rockets were fired toward the Israeli-occupied territory. Only one of the rockets reached the area, while the other three appear to have exploded within the Gaza Strip, it added.

The Israeli military frequently bombs the Gaza Strip, with civilians being the main target of such attacks.

Israel has also launched several wars on the Palestinian coastal sliver, the last of which began in early July 2014. The military aggression, which ended on August 26, 2014, killed nearly 2,200 Palestinians. Over 11,100 others were also wounded in the war.

The Gaza Strip has been under an Israeli siege since June 2007. The blockade has caused a decline in the standards of living as well as unprecedented levels of unemployment and unrelenting poverty.

The Israeli regime denies about 1.8 million people in Gaza their basic rights, such as freedom of movement, jobs with proper wages as well as adequate healthcare and education.
18 aug 2019
Three Palestinians killed in Israeli bombing of Gaza border area

Three Palestinians were killed and another suffered injuries when an Israeli warplane bombed on Saturday night plots of agricultural land near the security fence in the north of the Gaza Strip.

According to the Palestinian health ministry, bodies of three victims and one injured citizen arrived aboard ambulances at the Indonesian Hospital in northern Gaza. video

A spokesman for the Israeli occupation army claimed that Israeli forces spotted a number of Palestinians near the security fence in northern Gaza before they were targeted by a helicopter and a tank.

Local sources told a reporter for the Palestinian Information Center (PIC) that Israeli helicopters bombed an unknown target in Beit Lahia as flares were being fired over the area.