The Israeli occupation forces (IOF) on Monday evening killed a Palestinian young man in an area near the illegal settlement of Enav in eastern Tulkarem.

The Hebrew media claimed that Israeli soldiers opened fire at three Palestinians near Enav settlement as one of them was trying to throw a fire bomb at an Israeli site, adding that a young man was shot dead and the others escaped the scene.

The victim was identified as ex-detainee Sameer Hamidi, a resident of Beit Lid town in Tulkarem.

Hamidi was released about two years ago after he spent three and a half years in an Israeli jail.
18 sept 2020
Doctor dies of heart attack after IOF fires stun grenades near him

A dentist from Jenin, north of West Bank, died on Friday afternoon after Israeli occupation forces (IOF) fired stun grenades near him while he was returning from his work in Barta'a al-Sharqiya town, south of Jenin.

Local sources told a PIC correspondent that Dr. Nidal Akram Jabareen, 54, was returning as usual from his dental clinic in Barta'a town.

As he passed between the lanes of the second gate, the occupation soldiers threw stun grenades near him. His heart stopped and he suffered a sudden cardiac arrest that led to his death.

Doctor Jabarin died before his arrival at the Jenin government hospital.

He posed no threat to the IOF soldiers especially as he passed the first checkpoint and was inside the crossing, the sources affirmed.

The Barta'a crossing separates Barta'a al-Sharqiya town from the Jenin province and thousands of citizens pass through it daily.
3 sept 2020
Palestinian prisoner dies of medical neglect in Ofer prison

A Palestinian prisoner died in an Israeli prison on Wednesday evening only few months before completing his 18-year sentence.

Wa'ed Prisoners Commission confirmed the martyrdom of the prisoner Dawood Talaat Al-Khatib from Bethlehem at Ofer prison near Ramallah.

The Palestinian Prisoner Society (PPS) said that Khatib died of a heart attack. Khatib, 45, suffered from bad health conditions during his arrest, it said, adding that he suffered a stroke several years ago and underwent an open heart surgery.

His continued detention has contributed to the deterioration of his health that coupled with medical neglect in Israeli prisons led to his untimely death, the PPS elaborated.

According to PPS, 225 Palestinians have martyred while in Israeli custody since 1967.

It renewed its demand for the release of all sick prisoners in the occupation prisons especially due to spread of the Coronavirus.

The occupation forces arrested Khatib on 2/4/2001 after they besieged his house in Bethlehem and he was scheduled to complete his sentence and be freed this coming December.

Wa'ed called on all Palestinian factions to reject the occupation's narrative about the circumstances of Khatib’s martyrdom and called on the International Committee of the Red Cross to investigate his death.

Tension mounted in Ofer prison after news of Khatib’s death as prison guards raided the cells to quell prisoners’ protests and sprayed them with gas.
20 aug 2020
Teen succumbs to wounds from Israeli gunfire west of Ramallah 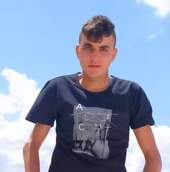 A Palestinian teen Thursday succumbed to his wounds sustained from Israeli military gunfire in Deir Abu Mashal village, west of Ramallah city, according to a local municipal source.

According to Zahran, Matar was one of three villagers who were wounded by Israeli military gunfire at the environs of the village and close to the settler-only bypass Road 465. He described the circumstances surrounding the incident as not clear.

As for the other two casualties, the Health Ministry confirmed that one of casualty was moderately shot by live bullets in the abdomen and foot, and was subsequently rushed to hospital, where medics his condition as stable. Another one was slightly injured with live rounds in the foot, and was rushed to hospital.
18 aug 2020
Updated: Israeli Officers Kill A Palestinian In Jerusalem

Israeli soldiers killed, Monday, a young Palestinian man near Bad Hotta, one of the gates of the al-Aqsa Mosque, in occupied East Jerusalem, reportedly after he attacked officers, wounding one. video

On Monday at night, the soldiers also abducted Tareq and his brother, Atef Sbeitan, near the al-Aqsa Mosque. video
The slain Palestinian was shot with at least three live rounds in the chest, one of them struck his heart, and was left on the ground without medical attention for about 90 minutes, while the soldiers “secured the area”, and the Israeli medics tended to the wounded officer.

The soldiers later abducted his mother, and two of his brothers, while crossing the “Container” military roadblock, near as-Sawahra ash-Sharqiya town, and summoned a few of his relatives for interrogation.

Eyewitnesses said the soldiers fired a barrage of live rounds at the young man, inflicting serious wounds, before closing the area, and prevented Palestinian medics from approaching him.

One of the medics, identified as Emad Hijazi, of the Al-Amal Society For Medical Services, said that he and his colleagues were praying at the Al-Aqsa Mosque when they hear several shots nearby and rushed to the scene.

Hijazi added that the Israeli soldiers and police officers assaulted him and his colleagues, before forcibly removing them from the area.

The Palestinian eventually bled to death after being denied the urgently needed medical treatment, while Israeli medics tended to the wounded officer, 19, who sustained a moderate injury. video

The wounded officer is a member of the Israeli “Border Police;” Israeli medics transferred him to Shaare Zedek Medical Center, for further treatment.

The intensity of Israeli fire also caused an injury to one Palestinian woman, who was walking nearby with her daughter.

The woman said that after hearing the shots, and after being injured, she looked around trying to find her daughter, but she was nowhere to be found, apparently managed to seek shelter.

The eyewitnesses stated that one of the Palestinian worshipers, who was leaving the Al-Aqsa Mosque, also tried to tend to the wounded Palestinian but the soldiers and officers removed him from the scene and prevented anybody from approaching him.

The soldiers and officers later opened the Chain Gate, also one of the gates of Al-Aqsa, and allowed the Palestinian worshipers to leave through it.

Israeli police tonight shot and killed a Palestinian man who was not immediately identified in Jerusalem's Old City, according to witnesses and the Palestinian Red Crescent.

The Red Crescent said police did not allow its crews to reach the Palestinian as he lay on the ground bleeding near Bab Hutta, one of the gates leading to Al-Aqsa Mosque in the Old City. video video

Police claimed it shot and "neutralized" a Palestinian after stabbing and lightly injuring one of its men.

Earlier today, Israeli occupation forces shot and injured a deaf and mute man at a checkpoint north of Jerusalem after suspecting he had a knife, but police later said he was unarmed.
16 aug 2020
Palestinian young man dies after being struck by settler car

A 21-year-old young man was proclaimed dead after a Jewish settler driving at high speed hit him with his car near the military checkpoint of Jubara in southern Tulkarem.

Iqab Bashir Darawsheh, a resident of Talluza in Nablus, was rushed to Ramah Medical Center in Qalansuwa city in the 1948 occupied lands, where doctors announced his death of a serious injury.

Darawsheh was en route to his workplace when the settler ran over him. He was married about one year ago.

Dozens of Palestinian citizens, including children and women, had been killed or injured during previous vehicular attacks by Jewish settlers in the West Bank.
Page:  8 - 7 - 6 - 5 - 4 - 3 - 2 - 1
Powered by