An Israeli settler car was reportedly targeted Tuesday evening with a home-made bomb north of Bethlehem to the south of occupied West Bank.

Israeli police claimed that a suspicious object was thrown near the Israeli car before an explosion was heard in the area.

The Israeli driver suffered a panic attack during the alleged attack, the sources added.

Israeli forces immediately rushed to the area and carried out search operations.

Meanwhile, local youths in Shufat refugee camp north of occupied Jerusalem managed to throw stones at a light-rail train passing through the camp.

A spate of stone-throwing attacks on Israeli vehicles reportedly occurred on Sunday in different West Bank areas in retaliation to settlers’ violations against the Palestinians and their property.

According to the Hebrew website 0404, an Israeli bus boarded by settlers sustained material damage when youths threw stones at it near Ma'ale Shomron settlement, south of Nablus city.

A similar attack happened on the road 445, which is located west of Ramallah city. One settler’s car was also slightly damaged.

Israeli soldiers and their vehicles at a checkpoint leading to Beit El settlement were also stoned by young men on the same day. The illegal settlement is located to the northeast of al-Bireh city.
4 nov 2016
Israeli soldier lightly wounded in Tulkarem anti-occuaption shooting

An Israeli soldier was injured on Thursday evening in an anti-occupation shooting attack targeting an Israeli army patrol near Tulkarem province.

According to the Israeli 0404 news site, the Israeli soldier sustained light wound after he was hit with shrapnel in an anti-occupation shooting attack near Tulkarem, in the northern occupied West Bank.

Israeli army troops showed up at the scene and evacuated the solider, before they raked through the area.

The attack targeted soldiers deployed on Road 104, near Tulkarem.

Earlier on the same day, Palestinian resistance fighters opened fire on an Israeli army troop near the illegal settlement of Ofra, built on Palestinian lands in northeastern Ramallah province.

The occupation army chased down the anti-occupation fighters and showered their car with randomly-shot spates of bullet fire. 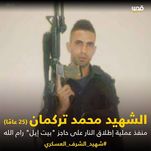 One Palestinian police officer was killed, on Monday evening, after carrying out a shooting attack against Israeli soldiers near Beit El settlement, east of the central West Bank city of Ramallah, wounding three of them, one seriously.

The Israeli army said the soldiers shot and killed the Palestinian, after wounding three of them, one seriously, at the Beit El road block.

The army added that the soldiers, manning a military tower close to the Annexation Wall, at the entrance of Beit El, came under fire from the Palestinian officer, before shooting him dead.

The officer has been identified as Mohammad Turkman, 25, from Qabatia town, south of the northern West Bank city of Jenin.

The Israeli ambulance provided the needed treatment to two wounded soldiers and moved them to hospitals in Israel.

Following the shooting several armored Israeli military vehicles invaded a fuel station, and a coffee shop, in the al-Baloa’ nearby area, in al-Biereh city.

The soldiers confiscated surveillance tapes and equipment, and fired many live rounds, rubber-coated steel bullets and gas bombs at local youngsters who hurled stones on the invading forces.

The army also declared Ramallah a closed military zone, and closed all military roadblocks leading to the district, in addition to installing several additional roadblocks.

A Palestinian youth was shot dead by the Israeli occupation army on Monday evening after he carried out an anti-occupation shooting attack in Ramallah province, wounding three Israeli soldiers.

According to Israeli news outlets, one soldier was seriously wounded and two others were lightly-to-moderately hurt when a Palestinian anti-occupation youth opened fire at the Beit El checkpoint at the northern entrance to Ramallah city.

The anti-occupation attacker, named Mohammad Abdul Khalek Turkman, was a Palestinian security officer in his 25s and a native of Jenin’s southern town of Qabatiya.

Paramedics arrived on the scene and took the injured soldiers to Hadassah Medical Center for treatment.

The resistance movement Hamas hailed the anti-occupation shooting, calling it heroic and “a strong message in the face of Israeli crimes”.

The Islamic Jihad Movement also acclaimed the operation, dubbing it a natural response to Israel’s terrorism against the Palestinian people.

Speaking with the PIC, Islamic Jihad leader Khader Habib said the anti-occupation attack is a translation of Palestinians’ right to self-defense in light of the ongoing Israeli assaults on Islamic holy sites and Judaization of Occupied Jerusalem.

Several Palestinians flocked to Turkman’s family home to extend condolences to his parents and relatives.

At least 236 Palestinians, including 11 from Qabatiya town, were killed by the Israeli occupation army since the outburst of the anti-occupation Jerusalem Intifada, in early October.
Israeli army besieges Beit Ummar town following car-ramming attack

Local activist Mohamed Awad said that the Israeli army closed all entrances to Beit Ummar and deployed dozens of its soldiers in the area following the car-ramming attack.

Awad added that the army also obstructed the movement of Palestinian vehicles on the road between Jerusalem and al-Khalil, which led to heavy traffic congestion.

A news reporter from the Palestinian Information Center (PIC) affirmed earlier that a large number of Israeli troops rushed to the attack scene, and closed the Jerusalem-al-Khalil road leading to the town’s main entrance.

He said that violent clashes broke out between local young men and Israeli soldiers at the main entrance to the town.

A military watchtower at the entrance also went on fire when young men attacked it with Molotov cocktails during the events.

These developments started after Israeli border soldiers killed a young man from the town as he was driving his car on the road, claiming that he hit and wounded three of them.
Israeli watchtower in al-Khalil goes on fire in arson attack

The arson attack on the military post happened during the violence that broke out following the intensive deployment of Israeli troops at the entrances to Beit Ummar town.