The Israeli occupation forces (IOF) arrested a Palestinian young girl near the Ibrahimi Mosque in al-Khalil city on Monday evening after allegedly finding a knife in her possession.

Local sources told the Palestinian Information Center (PIC) that the soldiers at the southern checkpoint of the Ibrahimi Mosque stopped and searched 28-year-old Manal Abu Ali and found a knife with her.

The IOF claimed the girl was interrogated and confessed to intending to stab a soldier.
2 june 2017
Palestinian young woman suspected of planning attack arrested

0404 Hebrew news website claimed that an unidentified young woman was detained for being suspected in planning attacks within the Green Line.

The detainee was immediately taken for investigation, the sources added.

Rights groups have reported that hundreds of Palestinians were killed and detained at Israeli military checkpoints without posing any threat to Israeli soldiers.
1 june 2017
Army Shoots A Young Palestinian Woman After She Reportedly Stabbed A Soldier

Israeli sources said the young woman suffered a severe injury, after the soldiers shot her in the stomach, while the wounded soldier sustained a mild injury and was moved to a hospital.

The Palestinian woman was receiving treatment at the scene, and was later moved to a hospital.

Israeli daily Haaretz quoted colonist settlers claiming that the soldiers demanded that she stays away from the post, “but she approached them, and stabbed one, before she was shot.”

Following the incident, the army closed the main Palestinian road, linking between the governorates of Jenin and Tulkarem, also blocking traffic to all villages and towns near Jenin city.
31 may 2017
Israeli Soldiers Abduct A Palestinian Teenage Girl In Hebron

Israeli soldiers abducted, on Tuesday evening, a Palestinian teenage girl, near the Ibrahimi Mosque, in Hebron city, in the southern part of the occupied West Bank.

Media sources in Hebron said the soldiers, continuously extensively deployed around the mosque, and have various roadblocks and metal detecting machines, abducted Nour Erzeiqat, 17, and took her an interrogation center, near Keryat Arba’ illegal colony, built on Palestinian lands in Hebron.

The Israeli army claimed that the soldiers searched the girl, and “located a knife, concealed in her handbag.”
Palestinian young men torch gate of illegal settlement in al-Khalil

A Palestinian young man on Tuesday evening hurled a Molotov cocktail at the main entrance gate of Kiryat Arba settlement, which was built illegally on Palestinian lands near al-Khalil city.

Local sources told the Palestinian Information Center (PIC) that a group of young men gathered near the northern iron gate of Kiryat Arba, east of al-Khalil, before one of them threw a Molotov cocktail at it.

The child remains motionless, and the man is heard once again saying, “just don’t shoot her, cuff her…,” then he started shooting at the child, “just don’t move, remain as are, stay still.” Then the officers are seen cuffing the child, and a voice is heard saying “she has a knife in her bag.”

Many Palestinians have been recently killed just because the soldiers suspected they “intended to carry out a stabbing attack,” without even attempting to attack anybody. Her name remained unknown until the time of this report.

People witnessing the unfolding events said they were so concerned that the child was about to be killed although she was motionless, because the soldier kept aiming his rifle at her, while standing in a shooting position, ready to pull the trigger at any second.

In related news, the soldiers abducted a young man, identified as Mohammad Awad, from Aqbat as-Saraya, in the Old City of occupied Jerusalem, and moved him to an unknown destination.

Israeli policemen rounded up the Palestinian minor, who was wearing school uniform, and took her to an investigation center in Occupied Jerusalem.

Israeli police arrested on Saturday afternoon a Jerusalemite young man suspected of stabbing a Jewish settler in the Old City of Occupied Jerusalem.

Quds Press reported that Israeli police along with border guards were intensively deployed in the vicinity of the Old City. Israeli forces closed the Old City’s gates and barred Jerusalemite people from accessing the site.

Israeli policemen rounded up Mohammad Awad from the Old City of Occupied Jerusalem after the alleged anti-occupation attack.

In a statement on Saturday, Israeli police reported that a haredi Jew was stabbed and slightly injured by somebody, then he was taken to the hospital.

In a following statement, the police denied the first claim that the attack resulted from an anti-occupation stabbing incident and stated that the attack was carried out in a fight between a Jerusalemite man, a settler and another Jewish man for criminal reasons. Eyewitnesses said that the settler was hit by a bottle.
13 may 2017
Jordanian killed after stabbing policeman in O. Jerusalem (updated) 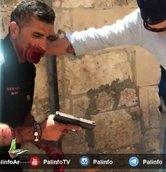 A Jordanian citizen was killed on Saturday afternoon in the Old City of Occupied Jerusalem after he stabbed and injured an Israeli policeman.

Eyewitnesses and media sources had earlier said that a Palestinian stabbed an Israeli policeman notorious for assaulting and harassing Palestinian women during their visit to the Aqsa Mosque.

However, Israeli police spokeswoman Luba Samri said that the attacker was a 57-year-old Jordanian citizen who arrived a week ago with a tourist visa.

Kasaji is the second Jordanian citizen to be killed by Israeli forces since the eruption of the Jerusalem Intifada in October 2015. The first was Sa’eed al-Amr, who was killed at one of the gates of the Aqsa Mosque in September 2016.

The Israeli police said the policeman was moderately wounded and transferred to Shaare Zedek hospital in Jerusalem.

A Palestinian citizen was killed on Saturday afternoon in the Old City of Occupied Jerusalem after he stabbed and injured an Israeli policeman.

Eyewitnesses and media sources said that a Palestinian stabbed an Israeli policeman notorious for assaulting and harassing Palestinian women during their visit to the Aqsa Mosque.

The identity of the Palestinian citizen is still unknown, while the Israeli police said the policeman was moderately wounded and transferred to Shaare Zedek hospital in Jerusalem.
11 may 2017
IOF closes Salem barrier west of Jenin after arresting young man

The Israeli occupation forces (IOF) on Wednesday closed the military Salem barrier west of Jenin city at the pretext of arresting a young man in possession of an explosive device.

Eyewitnesses told Quds Press that Israeli soldiers arrested a Palestinian young man at the road barrier, closed it and prevented relatives and lawyers of prisoners from going to the military Salem court.

They said that an Israeli officer told citizens at the barrier to leave the area, claiming there was an explosive device to be dealt with later by special technicians.

The Israeli army often closes barriers and checkpoints connecting different areas of the West Bank with each other under flimsy pretexts in order to obstruct the movement of Palestinian citizens.
10 may 2017
Israeli soldier injured in ambush in Taqua town

An Israeli soldier on Tuesday evening was injured when a group of Palestinian young men ambushed and attacked a military force at an entrance to Taqua town, east of Bethlehem in the occupied West Bank.

Eyewitnesses told the Palestinian Information Center (PIC) the young men hurled a hail of stones at the military force within al-Shurfa area of the village and managed to escape without being spotted.

They added that the Israeli occupation army intensified its presence at all entrances to the village following the attack and evacuated the wounded soldier to a hospital in Jerusalem.
4 may 2017
Young Palestinian Man Suffers Serious Wounds By Israeli Army Fire In Hebron

Israeli soldiers shot and seriously injured, Thursday, a young Palestinian man allegedly after attempting to stab Israeli soldiers, near the Ibrahimi Mosque, in Hebron city, in the southern part of the occupied West Bank.

Israeli sources claimed the young Palestinian man attempted to stab the soldiers at a military roadblock, near the mosque.

They added that the young man suffered serious wounds, but did not fall into a coma following his serious injuries, and was moved to Hadassah Ein Karem hospital, in Jerusalem.

The soldiers claimed that the young man, in his twenties, is from Hebron city, and that the soldiers reportedly found a “toy gun and a grenade” in a bag he carried.
30 apr 2017
IOF opens fire at resistance post east of central Gaza

Local sources reported that Israeli troops opened fire intensively at the observation post. Luckily no one was injured in the gunfire attack.