The IOF closed all entrances to Beit Fajjar and arrested the Palestinian youth Amjad Taqatqa at the main entrance of the town.

Israeli soldiers shot, and seriously wounded, on Wednesday evening, a Palestinian teenage girl, near the Etzion colony block, south of Bethlehem, in the occupied West Bank, after she allegedly tried to ram them with a car.

Initial information revealed that the girl has no driver’s license, and never had any driving lessons.

The girl has been identified as Fatima Jibrin ‘Ayed Taqatqa, 16, from Beit Fajjar town, close to the incident location, south of Bethlehem.

Initial information indicates that the girl does not have a driver’s license, was not experienced in driving a car, and likely became scared seeing the soldiers at the intersection before losing control of her vehicle.

The girl crossed the median of the street, and struck metal bars protecting a bus stop in the opposite direction.

The soldiers opened fire on the car, seriously wounding Fatima, alleging that the incident was a deliberate attack.
11 mar 2017
Injured young man arrested by IOF during clashes east of Ramallah

The Israeli occupation forces (IOF) on Friday evening arrested a wounded young man during violent clashes with local youths in Silwad town, east of Ramallah in the West Bank.

Eyewitnesses said a young man was arrested by soldiers after he suffered a bullet injury in his head during skirmishes in Silwad.

They added that another young man also suffered a bullet injury during the events.

The identities of the two young men are still unknown.

Two other young men identified as Majdi Abu Rahma and Issa Abu Rahma were arrested during the clashes that broke out with soldiers after the latter attacked the weekly anti-wall march of Bil’in west of Ramallah.

In a separate incident, anonymous persons detonated explosive devices and firecrackers at Israeli soldiers and their vehicles in at-Tur town, east of Occupied Jerusalem.

There is still no information if the attack caused injuries among the soldiers.
7 mar 2017
Israeli police: Palestinian stabs settler south of O. Jerusalem

The Israeli police claimed that a Palestinian citizen stabbed an Israeli settler on Tuesday near al-Walaja village, southwest of occupied Jerusalem, before withdrawing from the scene.

The police said in a statement that the settler was stabbed in the hand by the Palestinian youth, and described his injury as "minor".

According to the statement which considered the attack "a hostile terrorist operation", the Palestinian youth is still nowhere to be found.

Investigations are being conducted amid media blackout imposed by the Israeli Public Censorship on the identity of the Palestinian youth accused of carrying out the attack.

Conflicting narratives were raised about the incident, especially that the Israeli army declared in a statement that the attack is criminal.

The Israeli police forces set up a number of checkpoints in Beit Jala and al-Walaja towns looking for the Palestinian youth who is still at large.
6 mar 2017
MPs, Hamas leader among several Palestinians kidnapped by IOF

A PIC news correspondent said the IOF stormed the southern West Bank province of al-Khalil and rummaged into the home of prisoner Tareq Id’is before they seized his father’s car.

Another MP—Anwar Azaboun (Hamas)—along with the senior Hamas leader Hassan al-Wardian and the lecturer at the Quds Open University Ghassan Hirmas were kidnapped by the Israeli forces from Bethlehem.

Hamas MPs Hassan Youssef, Ahmed Mubarak, Mohamed Jamal al-Natsha and Azzam Salahab are currently serving administrative sentences in Israeli jails with neither charge nor trial. Other MPs, including  Marwan al-Barghouti and Ahmed Saadat, have also been held in Israeli lock-ups.

The IOF further ravaged the home of the Palestinian citizen Mootaz al-Ja’bah and summoned him to questioning in Etzion camp.

At the same time, the occupation army wreaked havoc on civilian homes near Gharnata (Granada) School.

﻿﻿An Israeli policeman was injured on Saturday evening after clashes with Palestinian youths erupted in Silwan town in Occupied Jerusalem.

The Hebrew 0404 website revealed that the policeman was lightly injured after Palestinian youths threw stones and fireworks at policemen south of al-Aqsa Mosque.

Eyewitnesses said that Israeli forces stormed the town amid shooting and firing of tear gas grenades which resulted in the eruption of clashes with Palestinians.
27 feb 2017
Israeli soldier wounded in West Bank shooting

An Israeli soldier last night was injured in a shooting attack near the illegal settlement of Efrat between Bethlehem and al-Khalil in the occupied West Bank.

Local sources said that Palestinian gunmen, believed to be from the resistance, opened fire towards a group of soldiers near the settlement and wounded one of them.

They added that the soldier was evacuated by an Israeli ambulance, while the Israeli army launched a manhunt for the shooters.

They also said that four Palestinians were kidnapped from their homes during the Israeli campaign in nearby areas.
IOF shoots, injures Palestinian girl after alleged stabbing attempt 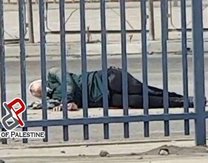 A Palestinian girl was shot and injured on Monday afternoon by Israeli Occupation Forces (IOF) at Qalandiya military barrier north of Occupied Jerusalem.

IOF soldiers shot the girl, closed the barrier in all directions and summoned reinforcements to the site. The girl, who has not been identified yet, was left on the ground wounded.

Israeli 0404 website alleged that she was carrying a knife and attempted to stab IOF soldiers at Qalandiya military checkpoint.

The Palestinian Red Crescent said, in a brief statement, that their crews arrived at the scene, but Israeli troops prevented them from approaching the wounded girl.
23 feb 2017
Israeli settlers storm Joseph Tomb, soldiers ravage Palestinian homes

Hundreds of Israeli settlers stormed at daybreak Thursday Joseph’s Tomb, in eastern Nablus province, at the same time as Israeli soldiers rummaged into Palestinian homes in the area.

At the same time, Israeli army troops cordoned off Nablus’s eastern corners and have been deployed at the main entrance to Balata Camp.

The Israeli forces further wreaked havoc on civilian homes in Balata on claims that a military patrol was targeted with gunfire.

Palestinian vehicles driving in the area have also been stopped and inspected by the occupation soldiers in search for alleged weapons.

Violent clashes burst out between the Israeli troops and the Palestinian anti-occupation protesters. An Israeli soldier reportedly sustained wounds in the confrontations.