A horde of Israeli settlers broke into al-Aqsa Mosque via the Maghareba Gate as part of the morning break-in shift that concluded at 10:30 a.m.

At the same time, the Israeli forces banned 20 Palestinians from al-Aqsa Mosque for periods of up to six months.

Israeli soldiers abducted, overnight and at dawn Sunday, at least seventeen Palestinians in different parts of occupied East Jerusalem, in the West Bank, during extensive and violent searches of homes and property.

The Palestinian Prisoners’ Society (PPS) has reported that the invasions and abductions were largely concentrated in the Old City, and its surrounding areas, and added that the soldiers interrogated many Palestinians, while ransacking their homes.

In addition, the soldiers summoned Rami Fakhouri and Mohammad Diqdaq for interrogation, at a military and security center, in the occupied city.

In related news, the Israeli army declared Jerusalem as a closed zone to all Palestinians, starting from today until April 17th, the end of the Jewish Pesach feast.

Meanwhile, many fanatic groups in Israel started calling and planning for extensive invasions, and provocative tours into the Al-Aqsa Mosque and its courtyards, along with several invasions in the Old City of occupied Jerusalem.
7 apr 2017
Israeli settler attempts to run over Palestinians near Hebron

Two Palestinians from the Hebron-area village of Beit Ummar were lightly injured Friday after an Israeli settler attempted to run them over on a main road connecting the southern occupied West Bank city of Hebron to Jerusalem.

Local activist Muhammad Awad told Ma’an that an Israeli settler was driving on the road, located near Beit Ummar, when the settler attempted to to run over Palestinians Muhammad Basem Khader al-Alami, 25, and Saed Samir Hassan al-Salibi, 20.

The incident came a day after Israeli settlers from the illegal settlement of Yitzhar in the northern West Bank closed a Nablus-area road in protest, calling for “revenge” on Palestinians after an alleged car-ramming attack was carried out earlier in the day near the illegal Israeli Ofra settlement in Ramallah, which killed an Israeli soldier and wounded another moderately.

Incidents involving Israeli settlers hitting Palestinians in the occupied Palestinian territory are a relatively regular occurrence, and are usually treated by Israeli security forces as accidents, even in cases when witnesses claim the car rammings were deliberate.

Many Palestinian activists and rights groups have accused Israel of fostering a “culture of impunity” for Israeli settlers and soldiers committing violent acts against Palestinians.

Between 500,000 and 600,000 Israelis live in Jewish-only settlements across occupied East Jerusalem and the West Bank in violation of international law, with announcements of settlement expansion earlier this year sparking condemnation from the international community.

According to the United Nations Office for the Coordination of Humanitarian Affairs (OCHA), there were a total of 107 reported settler attacks against Palestinians and their properties in the West Bank and occupied East Jerusalem in 2016.
6 apr 2017
Israeli settlers close Nablus-area road in protest of deadly car ramming, vow revenge 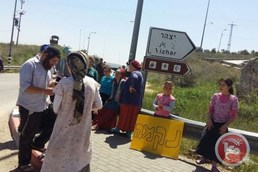 Dozens of Israeli settlers blocked off a road near the illegal Yizhar settlement in the northern occupied West Bank district of Nablus on Thursday, holding signs that called for revenge on Palestinians after an alleged car-ramming attack was carried out earlier in the day near the illegal Israeli Ofra settlement in Ramallah, which killed an Israeli soldier and wounded another moderately.

Hebrew-language media reported that some 30 Israeli settlers, residing in the occupied Palestinian territory in contravention of international law, protested at the road under protection of armed Israeli forces, blocking Palestinian cars from passing through.

An Israeli army spokesperson said she would look into reports. However, she said she was not sure if Israeli army forces were at the scene. Spokespersons for the Israeli police and border police were not immediately available to comment.

Earlier on Thursday, an Israeli soldier -- 20-year-old Elchay Teharlev -- was killed and another moderately injured, after a Palestinian car slammed into them at the Ofra junction near the illegal Israeli settlement by the same name.

Israeli forces detained the Palestinian driver at the scene, who was later identified as Malik Ahmad Moussa Hamid, 23, from Silwad in northeastern Ramallah.

Witnesses said at the time that more than 25 bullet holes were puncturing the walls of the apartment, while adding that Israeli forces could have easily detained the teenager, "but they executed him."

Israeli forces also shot and killed a Palestinian woman last week after she allegedly carried out a stabbing attack near Damascus Gate in the Old City, in which no Israelis were injured. The Palestinian Ministry of Health identified the slain Palestinian woman as 49-year-old Siham Ratib Nimr, from East Jerusalem.

Nimr was the mother of Mustafa Nimr, a 27-year-old Palestinian who was killed in September when Israeli border police showered his vehicle with live fire as he was driving near clashes outside of Shufat refugee camp, while he was bringing home food and baby clothes.

Though Israeli forces have claimed that Palestinians were allegedly attempting to carry out attacks when they were killed in seven of these cases, Palestinians and rights groups have disputed Israel's version of events in a number of cases.

The Israeli occupation authorities (IOA) handed an order on Wednesday to a Palestinian employee at the Awqaf (endowment) Department banning him from entering al-Aqsa Mosque.

The head of the information department at the Islamic Awqaf in Occupied Jerusalem, Tareq al-Hashlamon, said that the Israeli police handed him a decision ordering him to stay away from al-Aqsa Mosque for six months, according to Quds Press news agency.

For his part, the public relations and media official at the Islamic Awqaf, Feras al-Debs, said that the IOA has launched a campaign in the recent months targeting the Islamic Awqaf employees, some of whom were banished and others were arrested.

Debs pointed out that four guards of al-Aqsa Mosque who work for the Islamic Awqaf Department returned to work on Wednesday after several days of banishment.

In a related development, the Israeli police secured protection on Wednesday for 80 Israelis who broke into al-Aqsa courtyards from Bab al-Magharbeh which has been under full Israeli control since the occupation of Jerusalem in 1967.

Feras al-Debs affirmed that 48 settlers, including 14 members of the Israeli intelligence and 18 Jewish students, stormed al-Aqsa courtyards in the morning hours.
4 apr 2017
Settlers level land in Bethlehem for setting up house caravans

Jewish settlers of the Israeli settlement of Sidi Bouaz leveled on Tuesday a Palestinian land in Ein al-Qessis area in al-Khader town south of Bethlehem.

Ahmed Salah, the coordinator of the Popular Committee against the Separation Wall and Settlement in al-Khader village, said that settlers used soil and rocks in order to level the Palestinian land. The land leveling aimed at setting up mobile house caravans for settlers in the area, he pointed out.

This move is a new challenge to Resolution No 2334 adopted by the UN Security Council by absolute majority on December 23, 2016. It stipulates halting Israeli settlement in occupied Palestinian territories.
Hundreds of Israeli settlers storm Joseph’s Tomb

According to eyewitnesses, over seven buses carrying hundreds of Israeli settlers rolled into Nablus’s eastern zone under heavy police escort.

Overnight, Israeli military patrols cordoned off the environs of the tomb as they set the stage for the break-in.

Clashes flared up in the area between the Israeli soldiers and the Palestinian anti-occupation youth in Amman Street and near the northern entrance to Balata refugee camp, east of Nablus. The occupation forces attacked the Palestinian protesters with randomly-discharged barrages of teargas canisters.
2 apr 2017
67 Israeli settlers break into 3rd holiest site in Islam

67 Israeli settlers on Sunday morning stormed the plazas of holy al-Aqsa Mosque via the Maghareba Gate.

Israeli policemen escorted 67 Israelis as they toured the al-Aqsa place of worship during the morning break-in shift.

A round of sacrilegious rituals was performed by the Israeli settlers all the way through the break-in.

A group of fanatic Jewish settlers on Saturday evening attacked Palestinians in Huwara and Bourin towns south of Nablus city in the northern West Bank.

Calls were heard through mosques’ loudspeakers urging people to gather and confront the attacking Jewish settlers, the eyewitnesses pointed out.
Israeli settlers block Palestinian farmers’ access to their lands

A group of Israeli settlers prevented on Saturday morning Palestinian farmers’ access to their lands in Qaryout town, south of Nablus city in the northern West Bank.

Eyewitnesses told the PIC reporter that the settlers stormed the town accompanied with Israeli occupation forces (IOF) and blocked local farmers from reaching their agricultural lands.

The settlers attacked the farmers and threatened them if they tried to reach their lands again, the sources added.

The settlers’ attack was carried out under the IOF protection.
31 mar 2017
Israeli attempts to build factories on Palestinian land in Salfit

Researcher Khaled Maali said the move makes part of Israeli attempts to build more factories in the Ariel industrial zone, in an act feared to destabilize even further the Palestinian ecosystem.

According to the PIC reporter, a number of Israeli buses carrying dozens of settlers stormed the site escorted by large numbers of Israeli occupation forces (IOF).

IOF soldiers were deployed in large numbers at the entrances of the town and prevented Palestinian movement during the provocative raid.

The settlers performed Talmudic rituals in the Palace before leaving the area.

Al-Muwaraq Palace is an ancient Roman building established over an area of 1,600 square meters. It is open daily except on Fridays, Saturdays and public holidays under the administration of the Palestinian Ministry of Tourism and Antiquities.
30 mar 2017
IOF arrests four Palestinian activists in al-Khalil

Israeli Occupation Forces (IOF) arrested on Thursday four Palestinian activists of the National Campaign to Lift the Closure of the Old City of al-Khalil during the commemoration of the 41st anniversary of the Land Day in Jaber neighborhood close to Kiryat Arba settlement.

Human Rights Defenders Assembly in al-Khalil said that a group of settlers, who escorted the IOF troops, assaulted the Palestinian activists while participating in the event.

An Israeli government-owned company has agreed to allow temple mount groups to hold the Passover sacrifice ceremony in the Umayyad Palaces (archeological park) area close to the Aqsa Mosque, according to Israeli media reports.

The Umayyad Palaces is run by the company for the reconstruction and development of the Jewish quarter in the Old City of Jerusalem, a government-owned corporation under the authority of the construction and housing ministry. The company approved the request to hold the ceremony in the park, but required organizers to also receive permission from the police in the city, Haaretz said.

Organizers of the event threatened that if the police refused to issue a permit for the sacrifice ceremony, they would petition the Israeli high court of justice for permission.

Aviad Visoly, a lawyer for the activists, said that if the high court did not overrule the police, the ceremony would be split into two parts, with the sacrifice conducted elsewhere and brought to the site.

The Jerusalem police said the event has not been approved and the issue is still under discussion.

Last year, the event was held in the Bet Orot outpost on the Mount of Olives, which overlooks the Aqsa Mosque. This year, organizers decided to hold the ceremony as close to the Temple Mount as possible, just south of the Western Wall Plaza.