Head of Bourin council, Raed al-Najjar, told the PIC reporter that a group of fanatic settlers of a nearby settlement outpost torched olive trees and agricultural lands east of the town.

Clashes broke out when the inhabitants rushed to the area in order to confront the attacking settlers. Meanwhile, Israeli occupation forces fired tear gas canisters at the Palestinian protesters.
Israeli Colonists Open Fire On A Nonviolent Palestinian Procession

As dozens of Palestinians marched, Thursday, in solidarity with the hunger striking detainees in Israeli prisons, a number of extremist Israeli colonists opened fire on them, in al-Biereh city, in central West Bank.

Media sources said the settlers were in Psigot colony, illegally built on private Palestinian lands, in al-Biereh city, in the Ramallah and al-Biereh district.

The sources added that the Israeli assailants, hiding behind concrete blocks, fired many live rounds into the air, pushing some youngsters to hurl stones at them. The incident did not lead to any casualties.

The nonviolent procession is part of various protests and activities, held across the occupied territories in solidarity with the Palestinian detainees who are ongoing with a hunger strike which started eleven days ago.
Dozens of Israelis break into Joseph’s Tomb in Nablus

According to eyewitnesses, seven buses carrying Israeli settlers rolled into the area at around 01:00 a.m. after hordes of Israeli settlers flocked to Beit Furik checkpoint, east of Nablus, under a tight security shield.

Clashes flared up in the area between the Israeli soldiers and the Palestinian anti-occupation youth in Amman Street and near the northern entrance to Balata refugee camp.

The break-in comes following calls for mass break-ins into Joseph’s Tomb launched by Israeli fanatics.
Israeli Colonists Injure A Palestinian, Cause Damage To Cars, Near Jenin

Several illegal Israeli colonists attacked, on Thursday at dawn, many Palestinian cars in the northern West Bank governorate of Jenin, causing damage, in addition to assaulting a man after pelting his car with rocks, causing injuries that required hospitalization.

Medical sources in Jenin said the colonists attacked Ali Ahmad Kabaha, after throwing stones at his car, forcing him to stop, and instantly started beating and kicking him.

A Red Crescent Palestinian ambulance rushed the scene of the attack, and moved the wounded man to Thabet Hospital, in Tulkarem. Kabaha was driving back home when the attack took place.

Furthermore, several colonists invaded the old site of Kadim evacuated outpost, near the Eastern Neighborhood of Jenin, before throwing stones and empty bottles at the Palestinians, in front of the soldiers who did not intervene.
26 apr 2017
Israeli settlers burn down Palestinian car in Nablus

Anti-settlement activist in the northern West Bank, Hassan Dughlas, said a horde of Israeli settlers set fire to the car of the Palestinian citizen Mustafa al-Dhmeidi, from Hawara, reducing the vehicle to ashes.

Surveillance cameras kept record of the arson attack and of the settlers’ infiltration into the area, Dughlas added.
Israeli Soldiers Invade Kifl Hares Town, Near Salfit

Dozens of Israeli soldiers invaded, earlier on Wednesday at dawn, the town of Kifl Hares, west of Salfit in central West Bank, and prevented the Palestinians from using the streets, while Israeli colonists visited sites in the area.

The Maan News Agency said many army vehicles invaded the town, fire many concussion grenades before forcing all stores to shut down, and ordered the Palestinians to remain indoors.

The invasion was carried out as the soldiers were transporting dozens of colonialist settlers, who wanted to visit ancient sites in the area.

Maan added that dozens of soldiers were also deployed at the main entrance of the town, searched many Palestinian cars and examined the ID cards of the passengers.
25 apr 2017
Settlers set fire to olive trees east of Bethlehem

A group of Israeli settlers burned 100 olive trees on Tuesday in Beit Ta'mir village to the east of Bethlehem city.

Representative of the Wall and Settlement Resistance Committee, Hasan Breijia, said that the settlers set fire to 100 olive trees in Palestinian lands close to an illegal settlement outpost.

Breijia pointed out that the burned trees, which are planted over an area of 5 dunums, belong to the two citizens Mubarak and Mohammed Zawahra.
24 apr 2017
Settlers level agricultural land in Bethlehem for settlement expansion

Extremist Jewish settlers leveled on Monday morning Palestinian agricultural land near al-Khader town, south of Bethlehem city, for the expansion of the illegal Sidi Bouaz settlement that was established by force in the area.

The anti-settlement activist in Bethlehem, Hassan Breijiye, said that the land leveled belongs to Ibrahim Sbeih from al-Khader town.

He told Quds Press that the land leveling aimed at constructing new mobile houses for settlers.

Breijiye also pointed out that the illegal land leveling usually takes place in spite of the fact that Palestinian owners of affected lands in that area possess official documents that prove their ownership of the land.
Illegal Israeli settlement outpost supplied with water

An Israeli military camp set up in Umm Zuqa, in the northern Jordan Valley, supplied a nearby illegal settlement outpost with water.

The settlement outpost, which was supplied with water, was built in early January 2017 on Palestinian private land, after Israeli settlers brought a herd of 30 cows to the area.

Israel’s coordinator for the government affairs claimed that an order was issued to stop construction works. However, the settlement was established soon after and has been expanding at the expense of Palestinian land lots.

The Israeli authorities further installed several water tanks and solar panels in the outpost. Dozens of trees have also been planted.

Activists from the leftist Machsom Watch group said Israeli settlers have showed up in the settlement quite frequently.

Last week, a pipe running from the largest water tank in the settlement outpost and whose edges were covered with mud was detected in the area in what was believed to be a sign of Israeli attempts to conceal field evidence of illegal settlement expansion.
Two Palestinian Children Injured After Being Rammed By A Speeding Settler’s Car Near Jerusalem

Palestinian medical sources have reported that two children were injured, on Sunday evening, after being struck by a speeding Israeli settler’s car, while walking with their parents in Sur Baher town, south of occupied East Jerusalem.

The sources stated that Mohammad Mousa Attoun suffered a head wound, while his sister, Nada, suffered several cuts and bruises.

An Israeli ambulance was called to the scene, and moved the two children to a hospital for treatment; their condition has been described as stable.

Eyewitnesses said a settler, who was accompanied by a passenger, entered the center of town from its main road, and was speeding through its streets, apparently while being chased by an Israeli police car, before ramming the two children in addition to striking several parked cars.

The settlers fled the scene, and hid in a medical center, before dozens of soldiers invaded Sur Baher, clashed with many local youths, and evacuated them.

The break-in was carried out under heavy police escort as part of the morning break-in shift that started at around 7 a.m.

The break-in follows the seven-day Jewish Passover holiday, during which mass desecration assaults were carried out at al-Aqsa under the religious pretext.

According to data by Jerusalem’s Awqaf (Endowment) Department, over 1,200 settlers defiled the site during the Passover.

Meanwhile, two Palestinian students were arrested by the Israeli forces at al-Aqsa Mosque and transferred to a detention center in the Old City.
Palestinian Injured After An Israeli Colonist Settler Rammed Him With His Car 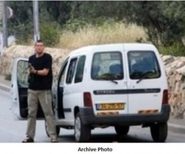 Palestinian medical sources have reported Saturday, that a young man was injured when he was struck by a speeding Israeli colonist’s car, in the al-Mas’oudiyya area, west of Nablus, in the northern part of the occupied West Bank.

The sources stated that the young man, identified as Assem Salem, 19, was trying to cross the road when the colonizer struck him with his car, and fled the scene without stopping, or even slowing down.

In related news, groups of extremist Israeli colonists carried out a series of invasions into Palestinian towns, including attacking a number of homes, in the northern West Bank governorate of Nablus, wounding an elderly woman and two young men, while Israeli soldiers also injured four young men, and caused many Palestinians to suffer the effects of teargas inhalation.

On Thursday, a Palestinian teenage girl, identified as Kawthar Mohammad Shawriyya, 17, suffered moderate wounds after being rammed by the Israeli colonist’s car, who also fled the scene.

On Wednesday evening, Israeli soldiers shot and killed a young Palestinian man, identified a Soheib Mousa Mashahra, 21, from the Sawahra town, near occupied East Jerusalem, after alleging that he deliberately carried out a ramming attack with his car.

The incident took place near Etzion Junction, south of Bethlehem, while videos and images from the scene clearly showed that the Palestinian car crashed into the rear of an Israeli bus.
Elderly Woman, Two Men, Wounded As Israeli Colonists Attack Nablus Villages; Soldiers Injure Four

Groups of extremist Israeli colonists carried out, Saturday, a series of invasions into Palestinian towns, including attacking a number of homes, in the northern West Bank governorate of Nablus, wounding an elderly woman and two young men, while Israeli soldiers also injured four young men, and caused many Palestinians to suffer the effects of teargas inhalation.

The attacks resulted in wounding an elderly woman, identified as Badee’a Mohammad Hamdan, 72, who suffered various cuts and bruises, including to the head, in addition to two young men, identified as Ahmad Jamil Odah, 34, and Ahmad Yousef Odah, 32.

Palestinian ambulances rushed to the village, and transferred the wounded residents to local hospitals.

Mohammad Awwad Najm, Fateh Movement spokesperson in Huwwara, told the WAFA News Agency that the attacks today were carried out in front of Israeli soldiers, who even protected the assailants.

He added that, instantly after the Israeli colonists started their invasions, local “Civil Guards” used the mosque’s loud speakers to warn the residents, but a group of assailants managed to infiltrate the village from the western part of the town, attacked the homes and residents, and fled within minutes.

On Saturday morning, dozens of colonist settlers invaded ‘Orif town, south of Nablus, and attacked many homes, causing excessive damage, especially to windows and doors, before Israeli soldiers also invaded the village and fired dozens of gas bombs, rubber-coated steel bullets and concussion grenades at the Palestinians who countered the assailing colonists.

At least three Palestinians were injured Saturday afternoon during clashes with Jewish settlers and Israeli Occupation Forces (IOF) in Ourif town south of Nablus city in the northern West Bank.

Head of Ourif council, Yousef Shehadeh, told the PIC reporter that settlers attempted, in the morning hours, to raid the town from different entrances. The inhabitants, however, confronted the settlers and prevented their incursion into the town.

The fanatic settlers returned back in large numbers and attacked Palestinians’ homes and properties. They smashed the windshields of a car and the windows of some houses.

The  IOF soldiers, in ten military jeeps, raided the site and fired rubber bullets and tear gas grenades at Palestinians injuring three men. The wounded were taken to the hospital.
Child badly injured in gunfire attack by settler

A six-year-old Palestinian child on Saturday suffered a bullet injury in his abdomen after a Jewish settler opened fire at him near Karma village, south of al-Khalil.

The wounded child was identified as Wael Awawdeh, according to the Palestinian health ministry.