An Israeli settler ran over a Palestinian youth on Route 60 near the illegal Israeli settlement of Gush Etzion in the southern occupied West Bank district of Bethlehem.

Muhammad Awad, head of the Palestinian Red Crescent Society (PRCS), confirmed that the Palestinian youth, identified as Hamza Shihadeh Najajra, from the Nahhalin village in the Bethlehem district, was run over by an Israeli settler.

Awad said that Najajra suffered a critical injury in the head and was taken to a hospital in Jerusalem City, in the central West Bank.

Israeli settlers sealed the door of the Sheikh Makki Mosque in the Old City of occupied Jerusalem with adhesive substance, on Monday, for the third time in a row.

Witnesses told Ma’an via phone call that the man responsible for opening and closing the mosque was shocked as he arrived to the mosque to open it as he found an adhesive substance and nails on the door and its lock.

Israeli settlers had attacked the mosque twice during March, by sealing its door using an adhesive substance in an attempt to prevent worshipers from opening the mosque in time for prayers.
Illegal Israeli Colonists Injure Two Palestinians Near Ramallah

A group of illegal Israeli colonists invaded, late on Sunday at night, the village of Jibiya, northwest of the central West Bank city of Ramallah, and injured two Palestinians.

The invaders were hiding behind trees, and throwing stones at the Palestinians, their homes and cars.

The village’s mosque used its loud speakers to warn the locals about the invasion, and called on the villagers to remain alert, especially in the invaded area.
7 apr 2019
Israeli settlers Palestinian shepherds in Tubas

A group of Israeli settlers assaulted Palestinian shepherds, on Sunday, in the northern Jordan Valley, in attempt to seize Palestinian-owned land for illegal settlement expansion.

According to Aref Daraghmeh, who monitors Israeli settlement activities in the area, said that heavily armed Israeli forces provided protection to Israeli settlers, who stormed an open field in the northern Jordan Valley and assaulted several Palestinian shepherds.

The assaulted shepherds fled the area in fear for their lives.

Daraghmeh pointed out that about 40,000 dunams (9,884 acres) of Palestinian-owned land in the northern Jordan Valley was seized by Israeli authorities for Israeli settlement expansion plans and to make way for active Israeli military training.

More than 600,000 Israelis live in Jewish-only settlements across occupied East Jerusalem and the West Bank in violation of international law, with recent announcements of settlement expansion provoking condemnation from the international community.

The majority of the Jordan Valley is under full Israeli military control, despite being within the West Bank. Meanwhile, at least 44 percent of the total land in the Jordan Valley has been reappropriated by Israeli forces for military purposes and training exercises.

According to the Palestinian nonprofit the Applied Research Institute - Jerusalem (ARIJ), more than 400,000 dunams (98,842 acres) of the 720,000 dunams (177,916 acres) that make up the total area of the Jordan Valley has been transformed into closed military and firing zones, with at least 27,000 dunams (6,672 acres) confiscated for illegal Israeli settlement building.
5 apr 2019
Palestinian child seriously injured after being hit by settler car

A Palestinian boy suffered serious injuries on Friday after he was deliberately struck by an Israeli settler in a speeding car in At-Tuwani village, south of al-Khalil.

Local sources reported that Ays Houshiya, 15, was rushed to hospital for treatment after he was seriously injured in the attack.

Eyewitnesses said that the Israeli settler further chased other Palestinian citizens in the same village in an attempt to hit them but they managed to escape.
4 apr 2019
Dozens of settlers led by Glick defile Aqsa Mosque

According to the Islamic Awqaf Authority in Occupied Jerusalem, about 68 settlers, including Glick, entered the Mosque through al-Maghariba Gate and toured its courtyards.

About 100 police officers wearing civilian attire also defiled the Mosque in the morning.

During the presence of settlers inside the Mosque compound, entry restrictions are imposed on Muslim worshipers at the entrances leading to the Mosque and their IDs are seized until they leave the holy place.
Settlers attack Palestinian cars on road north of Ramallah

A horde of Jewish settlers on Thursday hurled stones at Palestinian vehicles on a road near the illegal settlement of Halamish, northwest of Ramallah in the occupied West Bank.

Eyewitnesses said that extrimist settlers rallied on a road used by the Palestinians near their settlement and embarked on showering cars with stones, which caused panic among the passengers.

They added that the settlers tried to intercept and stop one car and assault its passengers, but the driver managed to avoid them and leave the area.
Israeli settlers raze Palestinian lands in Burin

Ghassan Daghlas, an official who monitors settlement activity in the northern West Bank, told Ma'an that several bulldozers, owned by Israeli settlers from the nearby illegal Israeli settlement of Yitzhar, razed and leveled lands in the Karm Abu Salim area of the village.

Daghlas added that settlers plan to expand the Yitzhar settlement from the Burin village side.

The razed lands are planted with fruitful trees that belong to several locals.

Since the occupation of the West Bank, including East Jerusalem, in 1967, between 500,000 and 600,000 Israelis have moved into Israeli settlements in occupied Palestinian territory, in violation of international law.

Hundreds of Israeli settlers, escorted by heavily armed Israeli forces, raided the Palestinian village of Awarta, south of the northern occupied West Bank district of Nablus, on predawn Thursday, and performed religious rituals in the area.

Head of the Awarta village council Saad Awwad, told Ma'an that Israeli forces raided the village and imposed closure by setting up several flying checkpoints at the entrances of the village and preventing Palestinians from going in or out.

Awwad added that hundreds of Israeli settlers raided three areas in the eastern and central parts of village where they performed prayers.

Israeli forces had reportedly warned locals from the settlers raid, requesting them to remove their vehicles from the streets through which settlers would pass.

Awarta, which is less than eight kilometers from Nablus, has 14 historic sites, 11 in the village and three on the outskirts, most of them sacred to Muslims.

Palestinians in the West Bank and East Jerusalem are surrounded by more than 600,000 Israeli settlers residing in at least 196 settlements on occupied Palestinian territory.

All Israeli settlements are considered illegal under international law.
3 apr 2019
One Palestinian Killed, Another Wounded, in Attack by Israeli Settler Near Nablus
the abdomen and taken to Rafidia hospital in Nablus, where he remains in serious condition.

The Israeli settler who shot and killed the young man tried to claim that “he had a knife” – but video footage taken by another Israeli settler on the scene, showing the brutal and callous treatment of Adel-Fattah’s body after he was killed, shows that there was no weapon.

In the video, a soldier and a settler are seen kicking the young man’s corpse, flipping him over and going through his pockets, finding nothing.

According to eyewitnesses, the claim of an attempted stabbing were completely false.

Khaled Rawajba, an employee at an auto repair shop on the side of the road, heard the altercation and stepped out of his workplace to see what was happening. He was then shot as well, and seriously wounded.

Israeli driver opens fire on knife-wielding man who tried to stab him inside his own vehicle; second armed Israeli driver also opens fire in incident near Nablus; no other injuries reported

A would-be Palestinian attacker was shot dead Wednesday morning during an attempted stabbing near Huwara in the West Bank. The man was shot by two armed Israeli civilians, including his target.

The attacker was evacuated to Beilinson Hospital in Petah Tikva in critical condition and died shortly afterwards. No one else was harmed in the incident.

Initial reports said the attacker blocked an Israeli vehicle in which a father and his daughter were sitting, at a junction near Huwara on Route 60, close to the Palestinian city of Nablus. He approached the car’s driver with a knife in his hand when the driver and an Israeli driving a nearby truck opened fire.

The driver was later named as Yehoshua Sherman, who runs the field campaign for the New Right Party.

“I went to work and drove from Elon Moreh towards the Tapuach Junction,” said Sherman. “At one of the junctions (along the way) a terrorist charged at the car and tried to open the door. I got out of the car (from the other door) and as he was making his way to me, I shot him along with another man who driving a truck behind me.”

Yossi Dagan, the head of Shomron Regional Council, expressed his support for the two Israelis who neutralized the attacker: “This is how one should act — firmly, against those who seek our harm, and with no fear,” Dagan said.

“This event highlights the importance of finishing the new road that bypasses Hawara, as we’ve agreed with the prime minister. There is no reason why Israeli residents should drive through hostile Arab communities every morning and endanger their lives and their children’s lives,” said Dagan. "The road should be completed swiftly.”
Illegal Israeli Colonists Cut 550 Trees, grapevines, Near Ramallah

A group of extremist illegal Israeli colonists, squatting on Palestinian lands near Ramallah, in central West Bank, invaded Palestinian farmlands, Tuesday, and cut 550 trees and grapevines, owned by a Palestinian from Deir Jarir village, northeast of the city.

The owner of the land, Abdul-Dayim Ajaj, said the Israeli assailants cut 400 grapevines, and 150 almond trees, which he planted in his land five years ago.

Ajaj added that the colonists also wrote racist graffiti on the water tank he has on his land and fled the scene.

Palestinian Minister, the head of the Colonization & Wall Resistance Commission, Walid Assaf, strongly denounced the attack, and added that it is part of repeated assaults and violations targeting that area.

He stated that Deir Jarir and several surrounding villages are subject to constant violations by illegal colonists from Kokhav HaShahar outpost, which was built on private Palestinian lands.

Assaf added that the Israeli assailants are also responsible for cutting hundreds of trees, burning Palestinian farmlands, attacking Palestinian farmers and shepherds, in addition to steeling and killing sheep and other livestock.

He also stated that the names of the assailants are known to Israeli Police and the soldiers, but instead of apprehending and prosecuting them, the police is protecting them, and is constantly attacking the Palestinians who try to defend their lands.
1 apr 2019
80 settlers defile Aqsa Mosque

Among those settlers were 38 visiting police and intelligence officers and five Jewish tourist guides, according to the Islamic Awqaf Authority.

Meanwhile, the Israeli police arrested Aqsa guard Mahmoud Najeeb after he reopened the gate of the Bab al-Rahma prayer area.

Over 20 Aqsa guards and 150 Palestinian citizens have been banished from the Aqsa Mosque since the recent events over the Bab al-Rahma area.
Illegal Israeli Colonists Write Racist Graffiti, Cause Damage To Cars, In Jerusalem 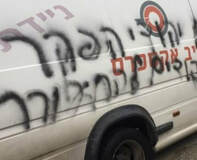 A group of fanatic illegal Israeli colonists infiltrated, on Monday at dawn, into a neighborhood in Beit Hanina, northern of occupied East Jerusalem, before writing racist graffiti, and caused damage to several Palestinian cars.

The colonists smashed the windows, including the windshields of several cars, and punctured their tires.

They also write racist graffiti on several parked cars, and walls, in the neighborhood before fleeing the scene.

The graffiti includes “death to Arabs,” and call for removing the Palestinian from the country.