Israeli police troops escorted dozens of Israeli extremist settlers as they broke into the al-Aqsa Mosque and defiled its western plazas.

The peaceful Muslim learners and worshipers kept, meanwhile, chanting “Allah is the Greatest” in protest at the break-in. Muslim women have also been maintaining vigil outside the Mosque and recited verses of the holy Quran in protest at being banned, by the Israeli forces, from praying at the site.

On Tuesday evening an armed Israeli settler crept into the Abu Ubaida Ibn al-Jarah Mosque in al-Jiftlik village, in the northern Jordan Valley, and threw leaflets threatening to kill Muslims in the area.

The locals voiced deep concern over the lives of their children as Israeli fanatics have often turned such threats into actions.
Settlers flood Palestinians' agricultural lands with sewage

Settlers from Betar Illit settlement on Wednesday flooded Palestinians' agricultural lands in Housan village to the west of Bethlehem with sewage.

Representative of the Anti Separation Wall and Settlement Committee in Bethlehem Hassan Breaijiyeh said that settlers pumped sewage on a 50-dunums land lot planted with olives and grapes.

The land is owned by Hamamra and Ismail two Palestinian families, he pointed out. Breaijiyeh underlined that if such Israeli aggressive practices continue in the area it will cause great damage to Palestinians' agricultural lands.

He appealed to human rights institutions to intervene in order to stop such Israeli violations.
Youth kidnapped by Israeli undercover unit from al-Khalil

Reporting from the abduction scene, a PIC news correspondent said an Israeli undercover patrol stormed Surif town and held a gun to youngster Ayman Hmeidat’s head before they dragged him to their car.

A few days ago, Hmeidat’s brother was kidnapped by the occupation soldiers from his family home in Surif.

At the same time, four Israeli army troops rolled into Beit Dajan’s western corners, to the east of Nablus city, and raked through the area, before they headed for the Beit Furik checkpoint.

Meanwhile, Israeli extremist settlers set fire to a residential quarter in Beit Dajan before civil defense crews rushed to the scene and put out the fire.

Another Palestinian youngster was kidnapped by the Israeli occupation soldiers from Jenin’s southern town of Mithlon, in the northern occupied West Bank.

The youth, identified as 24-year-old Ahmad Majed Rabay’a, was kidnapped at a makeshift checkpoint pitched on the Arraba crossroads, to the southwest of Jenin.
23 aug 2016
Israel admits building tunnel between Aqsa Mosque and Silwan

Israel's antiquities authority has revealed that it built a 580-meter tunnel stretching underground from the southwestern corner of the Aqsa Mosque to Ein Silwan district.

According to Qpress website on Tuesday, a recent report released by the Israeli antiquities authority said the tunnel was funded by the right-wing settler group Ir David Foundation, known locally as Elad.

The report noted that the construction of this tunnel started in July 2013 and ended in late 2014.

In previous reports issued between 2008 and 2015, the Aqsa Foundation for Endowment and Heritage (closed and banned by the Israeli government) had revealed several secret tunnel diggings in different locations extending underground from the central area of Silwan district to al-Maghariba Gate of the Aqsa Mosque.
Dozens of Israeli Settlers Raid Al Aqsa Mosque

According to Al Ray Palestinian Media Agency, Jerusalem sources said that 46 settlers, heavily guarded by Israeli special forces, broke into the courtyards of the mosque, which is exposed, on a near daily basis, to the storming and provocation of Israeli settlers who attempt to perform a Talmudic rituals and desecrate the sanctity of the holy site.
Civilians injured, others arrested in West Bank assault by Israeli army 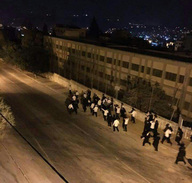 11 Palestinians reportedly sustained bullet injuries in Bethlehem as the IOF stormed Palestinian blacksmith workshops in the city. The occupation troops ruled for closing the workshops under the pretext of manufacturing weapons.

Several Palestinian protesters were left injured in the assault. The Palestinian Red Cross Organization said violent clashes burst out in the area and culminated in bullet wounds and suffocation cases.

A Palestinian youth was rushed to a Bethlehem hospital so as to be urgently treated for critical foot wounds sustained in the attack. The IOF kidnapped two other youngsters from al-Khalil after they rummaged into their family homes.

Israeli army patrols showed up at the scene and provided the settlers with a tight security shield. The Israeli police said in a statement that over 60 settlers reached Joseph’s Tomb without obtaining permits from the Israeli authorities.

A group of Breslovers attempted to visit Joseph's Tomb overnight without coordination or authorization with authorities; two were very lightly injured from stone-throwing, and those who reached the Tomb themselves hurled rocks at Arabs.

A group of Breslov Hassidim attempted to visit Joseph's Tomb in Nablus without authorization overnight Tuesday, contrary to Israeli law. A bus containing 32 was attacked with stone-throwing, and two of the Israelis were very slightly injured. In turn, different groups of Breslovers who managed to reach the holy site threw stones at Arabs there.

Their bus, which bore Palestinian license plates, did not reach the tomb, as it was stopped at the entrance to the city, where it was attacked by stones. The bus drove away, and its passengers began to flee on foot. A large force of IDF soldiers arrived at the scene to rescue the Hassidim. All the passengers were detained for questioning at the Israel Police station in Ariel, which is located in Samaria in the West Bank.

Magen David Adom (MDA) reported that at 3:43am, they received a report of a 17 year old who was injured by a stone at the scene. MDA paramedics, working jointly with an IDF medical force, treated him and transported him to Petah Tikva's Schneider Children's Medical Center of Israel.

The Judea and Samaria Division of the police reported that approximately 60 Breslovers visited Joseph's Tomb without authorization. At the site, public disturbances broke out, and the crowd threw rocks at local Arabs. IDF and police forces were called to the scene to calm the situation.

The police commented on the incident, "We view the events of tonight as extremely serious. Entries that aren't coordinated and that aren't under protection endanger both those entering and also the security forces who come to help."

The IDF Spokesperson Unit said that multiple units entered the area in response, and the Hassidim were transferred to the police for investigation. The IDF emphasized that the entrance of Israeli citizens to A areas is dangerous and against the law.
20 aug 2016
Ariel settlers drill artesian water in Salfit

Jewish settlers from Ariel settlement have recently drilled an artesian well on an annexed plot of land belonging to the famers of Salfit, north of the West Bank, according to local eyewitnesses.

The well was built in Khirbet al-Shajarah area, which is located between Ariel settlement and the segregation wall.

Maali added that Ariel settlers also built a huge retention basin in the area to contain large amounts of water.

He affirmed that the IOA controls water resources in the West Bank and provide its settlements with ceaseless water supplies while deliberately depriving the Palestinians in certain areas of Salfit, Jenin and Nablus of their water needs.
IOF storms different locations in Nablus

The nearby Beit Dajan town was also stormed by Israeli forces for the second time in the past 24 hours resulting in clashes in the vicinity of the boys’ school.
19 aug 2016
Fanatic Israeli settlers storm Islamic site in Kafl Haris

According to eyewitness accounts, Israeli fanatic settlers flocked to Kafl Haris and performed sacrilegious rituals inside an Islamic holy site before they stole its iron gate and windows.

The extremist Israelis reportedly yelled anti-Muslim slogans in a barefaced provocation to the locals.

A number of settlers were, meanwhile, waving arms during the assault, sparking panic in the area.
18 aug 2016
Hordes of settlers, policemen defile Aqsa Mosque

Some settlers tried to perform rituals at the Islamic holy site, which provoked the Muslim worshipers there into chanting religious slogans to prevent them from doing so.

Outside the Mosque's gates, the Israeli police persisted in banning the entry of several Palestinian women to the holy site.
16 aug 2016
New Israeli diggings south of Aqsa Mosque

The Israeli occupation authority (IOA) is embarking nowadays on carrying out new deep diggings several meters away from the southern side of the Aqsa Mosque and the historical wall of Jerusalem.

According to local sources, the Israeli antiquities authority started, with funding from the settler group Elad, to carry out widespread diggings at the entrance to Wadi Hilweh neighborhood of Silwan district.

Truckloads of dirt and rock have been removed from the site, where the depth of these diggings are estimated to have reached four meters so far.

According to a recent field visit to the site conducted by Qpress news agency, the new excavations seem to be aimed at connecting the network of underground tunnels beneath the Givati parking lot and the so-called City of David area with each other.
15 aug 2016
Jordan: Israel's acts at the Aqsa Mosque will trigger religious war

The Jordanian authorities have strongly denounced Israel's "wanton" violation of the Aqsa Mosque's sanctity through its persistence in allowing Jewish settlers to defile it, especially during the last two days and today.

Jordanian minister of awqaf and religious affairs Wael Arabiyat expressed his country's condemnation of the unprecedented massive desecration of the Aqsa Mosque that happened yesterday morning by over 400 Jewish settlers escorted by a large number of police forces.

Arabiyat also deplored the Israeli police for allowing more than 27 settlers to defile the Mosque during the dawn and morning hours of Monday.

He slammed the rituals which the settlers performed during recent break-ins at the Mosque and the brutal police assaults on Muslim worshipers as a "flagrant disregard for the Muslim nation's feelings and a clear violation of the international law and norms."

He warned that "Israel's persistence in its violation against the Aqsa Mosque would lead to a religious war in the region."

The minister hailed all Muslims and awqaf employees who courageously confronted the settlers' break-ins at the Mosque and called on the Arab League, the Organization of Islamic Cooperation and the UN to swiftly move to curb Israel's escalating violations at the Islamic holy site.
Israeli preparations to construct alleged temple on ruins of Aqsa Mosque

Reports have recently been released by Israeli news outlets on underway preparations to build the alleged temple mount on the ruins of the al-Aqsa Mosque, in Occupied Jerusalem, pending a formal political decision.

The reports came at a time when Israelis have celebrated the so-called destruction of the temple ceremony.

Participants in the underway preparations claimed that the transfer of the needed equipment to the al-Aqsa Mosque, precisely to the Dome of the Rock, was probable within the next few hours.

They added that the construction works will take no more than three years time.

A report aired Saturday by the Israeli Channel 2 revealed underway activities and arrangements by the Israeli Women for the Temple Organization to start the construction of the alleged temple.

The activities include workshops and secret meetings to boost mass break-ins at al-Aqsa Mosque and celebrate wedding ceremonies once every couple of days.

Efforts have also been underway by Israeli lobbies to put such Israeli schemes into effect and garner support for the bid among Israeli MKs and stakeholders.

Another report broadcast Friday by the Israeli Channel 1 showed intensive preparations for the construction of the alleged temple, including raising a livestock as a sacrifice to the temple.

The report quoted the director of the Temple Institute, Yisrael Ariel, as stating that over 40 priests are awaiting instructions to start their work in the alleged temple and that the institute has prepared the needed equipment for the temple.