Israeli settlers of Yitzhar settlement on Saturday installed caravans on a Palestinian agricultural land which has been illegally confiscated near the West Bank city of Nablus for settlement expansion.

Other groups of Jewish settlers set up new caravans on Palestinian lands in Qousin town to the west of the city.

Settlers of Ennab settlement east of Tulkarem city also stalled another number of caravans in the area.

The head of the village’s council, Marwan Sabah, said that a group of settlers attacked the town in the early hours of yesterday morning and burned two vehicles belonging to local residents of the village.

Sabah added, according to the PNN, that the Jewish settlers also painted slogans vowing revenge from the town’s residents, following the killing of three in the illegal Helmish settlement, which borders the Palestinian town in the north of Ramallah.

In days past, Israeli settlers of the Helmish and Ateret settlements carried out several attacks against Palestinian properties in the village, he noted.

Violent clashes between Palestinians and Israeli forces also broke out today, in Ramallah’s northern village of Kubber, after forces brutally stormed the town amid heavy fire of rubber-coated bullets and tear gas bombs.

According to locals, a young Palestinian was hit by a rubber bullet during the clashes, while two relatives of a Palestinian prisoner were detained. The town’s entrance was also closed.
Israeli Colonists Chase A Child, Hurl Stones At A Home, In Hebron

A number of extremist Israeli colonists chased, on Friday at night, a Palestinian child, and hurled stones at a home, in Wad al-Hasseen area, close to Keryat Arba’ illegal colony, in Hebron city, in the southern part of the occupied West Bank.

Kayed Da’na said the colonists attacked his nephew, then chased him, before throwing stones at his home, when the child ran into the building to seek shelter.

Da’na added that the colonists have recently escalated their assaults against the Palestinians, their homes and property in the area.

“For more than a month now, every Friday and Saturday seem to witness most of the attacks, against us, our children and our homes,” he stated, “This night, they chased my nephew, and hurled stones at my home… if they managed to capture my nephew, only God knows what they would have done to him…”

Furthermore, resident Aref Jaber from the Salayma nearby neighborhood, said dozens of soldiers invaded the area, stopped and searched many Palestinians, and interrogated several residents while inspecting their ID cards.
10 aug 2017
Settler runs over four Palestinian children in Occupied Jerusalem 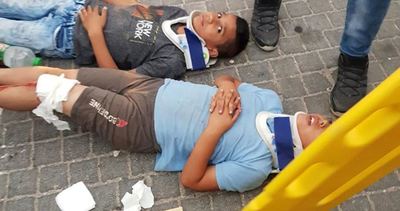 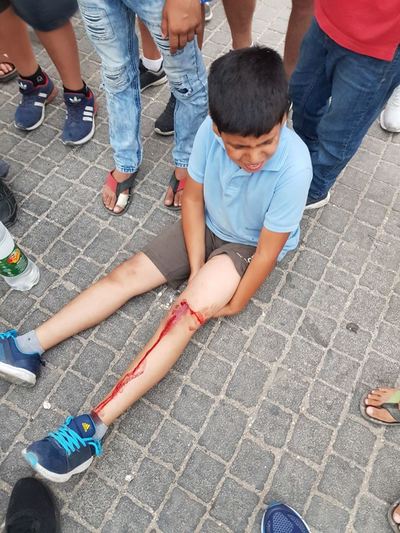 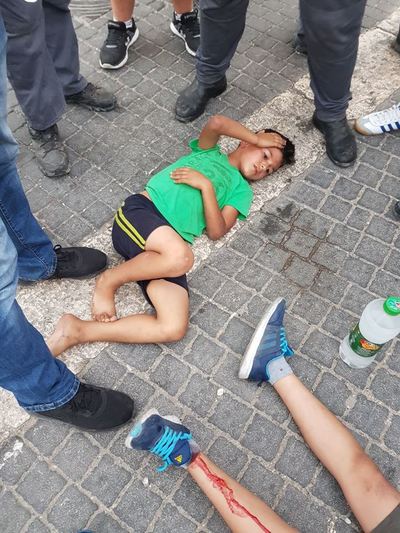 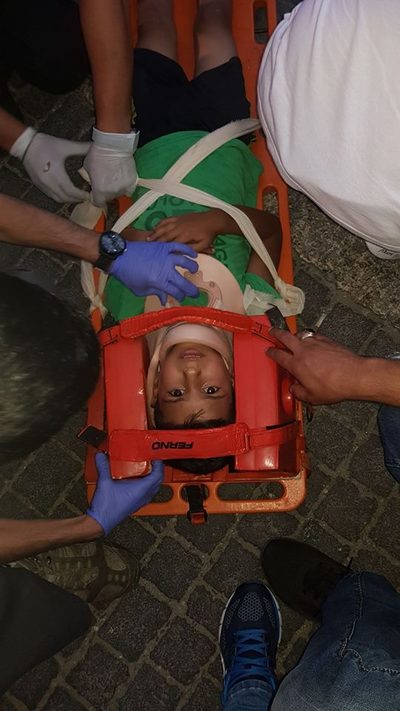 A Jewish settler deliberately rammed his car into a group of children in Silwan town, south of the Aqsa Mosque in Occupied Jerusalem, on Thursday evening injuring four of them.

Jerusalemite sources said that the Jewish settler deliberately hit the four children, including two brothers, and fled the scene.

Boisterous voices emerged from the vicinity of the Ibrahimi Mosque in the southern occupied West Bank as dozens of Israeli settlers partied near the site on Wednesday evening.

Dozens of Israeli settlers residing in illegal outposts in al-Khalil and Bethlehem flocked to the yard of the Ibrahimi School, near the Ibrahimi Mosque, and raised the Israeli flag before they headed to Mosque's yards and performed provocative rituals.

Sacrilegious dances were performed and racist slogans yelled by the Israeli settlers near Joseph’s Tomb.

The Israeli settlers and forces further prevented Palestinian civilians from reaching their homes in the area.
Settler Extradited by Brazil after Fleeing 20-year Sentence for Killing Palestinians

Yehoshua Elitzur, 44, is getting extradited from Brazil after he fled from Itamar settlement 10 years ago, before his plea hearing for killing two Palestinians Sael Jabara al-Shatiya, east of Nablus, in 2004.

Elitzur was initially accused of murder, but was sentenced to 20 years in prison, in 2005, for manslaughter.

The prosecutor, according to the PNN, couldn’t prove Elitzur’s intention to murder Al-Shatiya. During his plea hearing, Elitzur was confined to house arrest, but managed to flee to Germany and, soon after, to Brazil.

In 2005, Interpol issued an international arrest warrant for Elitzur, who was found and arrested 2 years ago, in Brazil. Now, Brazilian authorities have accepted the request from Israel to extradite him.
Settler Violence Continues in Hebron

A member of the Jabari family, a man aged 24 using a mobility scooter, was assaulted and injured by a group of settlers.

The incident began around 9:30 pm on Saturday 5th August, when a group of 30 to 50 settlers arrived on the streets of Wadi al-Hussein and started harassing locals. The settlers attacked a 24-year old disabled Palestinian man living near the Kiryat Arba settlement, pushing him off of his mobility scooter and beating him. The man suffered injuries to his leg from the attack. Even though the situation should have required intervention from the Israeli occupation forces, only the Israeli civil administration arrived at the scene.

According to the family of the Palestinian man, they had heard noises near their home and had run down to the street to see what was going on and to find their family member. The family was not able to locate the 24-year old, because the civil administration had transferred him after he was beaten by the settlers. In the street, the family was both verbally and physically assaulted by the settlers. The aggression continued until 2 AM and no Israeli soldiers were at any time present in the neighbourhood to protect the Palestinians living there.

As a result, the settlers had free access to the lands of the Jabari family and the rest of the Palestinian neighbourhood. During the hostilities, the settlers not only assaulted people physically and verbally, but also threw stones at Palestinian houses and cars. Thus, many Palestinian families were forced to stay inside their houses during this settler attack. No settlers were arrested after the hostilities and they were allowed to walk back freely to the settlement. It is likely that the attack was a response to the violence the day before on 4th August, in the same neighbourhood, in which four Palestinians and a settler girl were injured after a large group of Israeli settlers attacked Palestinians with rocks.

The Wadi Al-Hussain neighbourhood lies next to the illegal Israeli settlement of Kiryat Arba and suffers from frequent settler violence, daily harassment as well as restrictions imposed on the community by Israel. The Jabari family won a court case last month against the claims from the municipality of Kiryat Arba to pay “Arnona” taxes of 160,000 NIS on the basis that they live within the borders of Israel. Kiryat Arba municipality sent the bill to the family based on the claim that they lived within the administrative borders of the settlement.

The Israeli court ruled on 27th of July that the “Arnona” claims were illegal and ought to be canceled. However, the family still struggles to protect their land against settlers, including against the illegally constructed outdoor synagogue named “Hazoun David” that was built on the Jabari family’s land. The settlers walk up to this synagogue twice a day and occupy the area, especially on Saturdays when they celebrate the Sabbath. The Jabari family is only one out of many Palestinian families living under these circumstances in occupied Palestine.
9 aug 2017
Israeli police, settlers defile 3rd holiest site in Islam

Israeli police troops and special forces cordoned off the plazas of holy al-Aqsa Mosque on Wednesday morning, triggering tension at and around the site.

Israeli policemen closed off al-Aqsa’s gate of al-Maghareba shortly after dozens of Israeli settlers broke into the site as part of the morning break-in shift.

Israeli settlers from the illegal Helmish and Ateret settlements, which border the Palestinian town of Umm Safa north of Ramallah, set fire to two Palestinian vehicles in the town in the early hours of Wednesday morning.

Head of the village council told Quds Press that a group of settlers attacked the town and burned two vehicles belonging to local residents.

Walls of local homes were vandalized by racist slogans, he added.

He pointed out that Israeli settlers recently carried out several attacks against Palestinian properties in the town.

Meanwhile, violent clashes broke out at dawn today in Kubber town north of Ramallah when Israeli forces brutally stormed the town amid heavy fire of rubber bullets and teargas bombs.

A young man was hit by a rubber bullet during the clashes while two relatives of a Palestinian prisoner were detained.

The entrance to the town was also closed.
Israeli Soldiers Abduct 25 Palestinians In The West Bank

The Palestinian Prisoners’ Society (PPS) has reported that Israeli soldiers have abducted, on Wednesday at dawn, at least twenty-five Palestinians, including children, during massive military invasions and violent searches of homes, in different parts of the occupied West Bank.

In Nablus governorate, in the northern part of the occupied West Bank, the soldiers invaded Madama town, south of the city, and abducted Mohammad Wajeeh Qitt, 28.

In Ramallah, in central West Bank, the soldiers invaded Kobar village, northwest of the city, and abducted Abdul-Jalil al-‘Abed and his brother Ibrahim al-‘Abed, after storming into their homes and searching them.

It is worth mentioning that Abdul-Jalil is the father of Omar al-‘Abed, who was injured and arrested by the soldiers, on July 21 2017, after he infiltrated into a home in Halamish Israeli colony, built on Palestinian lands near Ramallah, and killed Yosef Salomon, 70, his daughter Chaya, 46, and his son Elad, 26.

The soldiers also installed sand hills on the town’s main road, and bulldozed the street, destroying it.

Also in Ramallah, many extremist Israeli colonists infiltrated into Umm Safa village, northwest of the city, burnt two cars and wrote racist graffiti calling for killing the Palestinians, and for revenge for the Halamish attack.

The invasion led to clashes between the soldiers and dozens of local youngsters, who hurled stones at the military jeeps, while the army fired several live rounds and rubber-coated steel bullets.

The soldiers also invaded the Deheishe refugee camp, south of Bethlehem, and abducted two Palestinians, identified as Abdul-Aziz Ahmad Arafa and Raed As’ad Salhi, after shooting and injuring them.

The Israeli army said one of its soldiers was injured during the invasion, after exchanging fire with Palestinian fighters, and that it is investigating the incident.

In Hebron governorate, in the southern part of the West Bank, the soldiers invaded many homes and ransacked them, in Hebron city and the nearby towns of Yatta, Sa’ir and Shiokh towns, and abducted six Palestinians.

It is worth mentioning that Badran is a senior political figure of the leftist Popular Front for the Liberation of Palestine (PFLP).