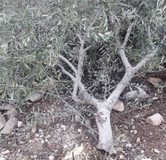 A group of illegal Israeli colonizers cut, on Saturday at dawn, dozens of Palestinian olive trees in ‘Arraba town, south of Jenin, in the northern part of the occupied West Bank.

Media sources said the assailants invaded an orchard, owned by a local resident identified as Nathmi Dheidi, near the illegal Dothan colony, which was built on Palestinian lands.

They added that the colonizers cut dozens of olive trees, which were planted approximately four years ago.

Nathmi said that attack was not the first, as the colonists previously targeted his land, and several other orchards and farmlands in the area.

A Palestinian taxi driver, in his sixties, turned himself in to the Palestinian Authority on Thursday evening after the vehicle he was driving hit an Israeli settler. The settler, 42-year-old Hava Rozin, died from her injuries.

After turning himself in, the taxi driver said that he initially fled the scene because he was terrified after he hit the Israeli settler that he would be shot. But after leaving the settler road, he immediately went to the Palestinian Authority in Nablus to report what had happened and turn himself in.

Israeli authorities have, on a number of occasions, shot on site Palestinian drivers who have had traffic accidents with Israeli vehicles, so his fear was not without basis.

The Israeli Intelligence Service Shin Bet announced early Friday morning that there was no evidence that this was a terror attack, saying instead that it was clear that it was a traffic accident.

Nevertheless, dozens of Israeli settlers set off throughout the night into Palestinian areas to carry out ‘revenge attacks’. Gangs of Israeli colonial settlers hurled stones and empty bottles at Palestinian cars in several areas, including near Yitzhar colony, Huwwara and Za’tara military roadblocks, causing damage to more than 40 Palestinian cars, and several injuries.

They also attacked several homes in Jaloud village, and closed many main roads in Nablus governorate, in addition to burning a Palestinian car, owned by Mohammad Issa Makhlouf, in Orif village.

The Israeli assailants also tried to burn a number of homes in Jaloud, but the locals clashed with them, before the army invaded the village and removed the settlers.

They also cut around 200 Palestinian olive trees, owned by Na’el ‘Oweisat, in the al-Lubban ash-Sharqiya village, south of Nablus.
In addition, the colonists invaded a cement slab manufacturing plant, and burnt a bulldozer, owned by Mohammad Issa Makhlouf.

Ghassan Daghlas, who monitors Israeli settlement activity in the northern West Bank, said that settlers from the illegal settlement of Eli broke into Wadi Ali area and chopped down 200 olive trees belonging to Nael Ewesat, a villager from Al-Lubban Ash-Sharqiya.

This came as settlers torched a bulldozer passing nearby Yitzhar settlement and hurled stones and glass bottles at Palestinian vehicles travelling along Nablus-Tulkarem Road, damaging some 40 vehicles.

The attacks came after an Israeli settler was killed by a Palestinian driver in a car accident, initially suspected as a hit-and-run attack late Thursday night.

Settler violence against Palestinians and their property is routine in the West Bank and is rarely prosecuted by Israeli authorities.

It includes property and mosque arsons, stone-throwing, uprooting of crops and olive trees, attacks on vulnerable homes, among others.

Between 500,000 and 600,000 Israelis live in Jewish-only settlements across occupied East Jerusalem and the West Bank in violation of international law.

All settlements across the West Bank are illegal under international law, particularly article 49 of the Fourth Geneva Convention, which establishes that the occupying power shall not deport or transfer parts of its own civilian population into the territory it occupies.
Jewish settlers torch Palestinian bulldozer in Nablus

A horde of extremist Jewish settlers on Thursday evening set fire to a Palestinian-owned bulldozer on a road in southern Nablus in the occupied West Bank.

According to a local official, settlers from the illegal settlement of Yitzhar set ablaze a bulldozer belonging to Ali Issa on a road between the towns of Urif and Asira al-Qibliya in Nablus.

The same gang of settlers also hurled stones at Palestinian cars as they were traveling on the Nablus-Qalqilya road.
16 aug 2018
Illegal Colonists Settlers Start Preparing Road For Outpost

On Thursday, a group of Israeli colonists, illegally living on Palestinian lands in the West Bank’s Plains, started the preparation work for paving a road leading to their illegal colony.

Palestinian human rights activist ‘Aref Daraghma, said the colonists started laying down the foundation of a new road which they intend to pave, in order to provide easy access to the illegal colony, in Khallet Hamad community, of the northern Jordan Valley of the occupied West Bank.

He added that, in 2016, the colonists illegally occupied Palestinian lands in Khallet Hamad, and installed barns and mobile homes, before settling there.

Daraghma stated that the outpost started the horizontal expansion into more Palestinian lands in the area.

Besides the illegal annexation and isolation of Palestinian lands, including fertile agricultural areas owned by the Palestinians, Israel’s colonies in the West Bank, including in and around occupied East Jerusalem, violate International Law, and the Fourth Geneva Convention to which Israel is a signatory and a constant violator.
Colonialist Settler Injures A Farmer; Soldiers Prevent Palestinians From Entering Their Lands In Salfit

An Israeli guard of the illegal Ariel colony attacked and injured, on Wednesday afternoon, a Palestinian farmer, while Israeli soldiers prevented several others from entering their lands, in Kifl Haris village, north of Salfit, in northwestern West Bank.

Media sources said the farmer suffered various cuts and bruises, and was moved to Yasser Arafat hospital, in Salfit.

They added that the soldiers prevented many farmers from entering their lands, isolated near the illegal colony, and demanded them to obtain permits from the Israeli “Civil Administration Office.”
14 aug 2018
Israeli masses call for killing Arabs during march in al-Khalil

Hundreds of extremist Israeli settlers joined on Tuesday a march staged near the Ibrahimi Mosque, in the southern occupied West Bank province of al-Khalil.

The march was held following calls launched by Israel’s settlement council to confirm the allegedly Jewish identity of the city and its holy sites.

Hundreds of settlers flocked to the plazas of the Ibrahimi Mosque, yelling “Death to Arabs”. video

About 80 Israeli settlers on Tuesday morning forced their way into al-Aqsa Mosque amid heavy police presence.

Spokesman for Jerusalem's Islamic Awqaf Department Feras al-Dibs said that the Israeli police opened al-Maghareba Gate and deployed their forces in the Mosque early in the morning in preparation for the break-in.

He added that 23 Jewish students of religious institutes entered the Mosque during the same period.

Israeli police on Monday summonsed two Aqsa guards for interrogation over their protest at the heavy beating of a Palestinian girl who was being detained by Israeli officers at al-Aqsa Mosque the same day.

Israeli soldiers attacked and abducted, on Monday evening, a Palestinian woman from the courtyards of the Al-Aqsa Mosque, in occupied Jerusalem.

Eyewitnesses said the soldiers assaulted the woman, and abducted her, before moving her to a nearby police station.

Firas ad-Dibis, the head of the Public Relations Department at the Waqf and Islamic Endowment Department, said the soldiers also summoned for interrogation two guards of the Al-Aqsa Mosque, identified as Ahmad Damiri and Ghazi Asaliyya, for trying to stop the assault against the woman.

The incidents took place after the police accompanied dozens of colonialist settlers into the courtyards of the holy site, and conducted provocative tours.

56 Israeli settlers, escorted by policemen and divided into groups, broke into al-Aqsa Mosque as part of the morning break-in shift and carried out a round of sacrilegious tours near Bab al-Rahma.

Several worshipers have been searched and dozens more have had their IDs seized while attempting to enter al-Aqsa to perform their daily prayers.

A Palestinian girl was arrested by Israeli police on Sunday on her way out of the Aqsa Mosque, in Occupied Jerusalem.

Another Palestinian lady, identified as Na’ima Ghazawi, was summoned to questioning by the occupation forces at the Mascoubiya detention center, west of Occupied Jerusalem.

Israeli settlers, escorted by policemen, broke into al-Aqsa Mosque as part of the morning break-in shift and carried out a round of sacrilegious tours.

Several worshipers have been searched and dozens more have had their IDs seized while attempting to enter al-Aqsa to perform their daily prayers.
11 aug 2018
Ariel settlement channels sewage to natural park in Salfit

Palestinian farmers have complained that sewage coming from Ariel settlement is polluting the atmosphere and the natural park in western Salfit.

According to local farmers on Saturday morning, wastewater is being channeled from Ariel settlement to the area and park of Wadi al-Matwi and Ghanates in western Salfit.

The wastewater has also reached the town of Kafr ad-Dik in Salfit, the farmers reported.