An Israeli settler surrounded hundreds of dunams of Palestinian lands with en electric fence in the al-Sweida area in the Jordan Valley, on Monday, under armed security by Israeli forces.

Mutaz Bsharat, an official who monitors settlement activity in the Tubas district/Jordan Valley, told Ma'an that the settler had set up 3 tents in the area several months ago and used them for cattle.

Bsharat pointed out that these lands are owned by Palestinians.

Additionally, Israeli forces installed surveillance cameras on all confiscated lands -- more than 600 dunams -- under procedures to prevent dozens of Palestinians from reaching their lands.

Bsharat added that Israel considers these lands under the “Absentee Property.”

The law was established following the 1948 establishment of the state of Israel that resulted in the mass displacement of more than 700,000 Palestinians. Israel’s definition of an “absentee” allowed for the Israeli state to take over Palestinian property even when the displaced residents ended up within the borders of the newly established state.

Palestinians have continued to be denied access to their properties for having been absent from their homes, even if just for a few days, as of 1947, when many Palestinians fled from their homes to escape Jewish Zionist forces during the Arab-Israeli war.
Israeli settlers destroy 2 solar panels near Hebron
Between 500,000 and 600,000 Israelis live in Jewish-only settlements across occupied East Jerusalem and the West Bank in violation of international law, with recent announcements of settlement expansion provoking condemnation from the international community.

The news agency said that large police forces deployed in the site and accompanied the settlers until they left the Mosque through al-Silsila Gate.

Settler break-ins into al-Aqsa Mosque are carried out on a daily basis, except on Fridays and Saturdays, in two rounds: in the morning and afternoon.
24 feb 2019
Israeli settlers seize hundreds of dunums of Palestinian land

According  to the local activist Aref Daraghmeh, the settlers placed barbed wire around the seized land located in Khillet al-Oqda and al-Sweideh area of the Jordan Valley.

Fifty years ago, the UN Security Council passed Resolution 242. The resolution is used as a framework for implementing the two-state solution to the Palestinian-Israeli conflict.

But since its adoption in 1967, Israel has violated the resolution by entrenching its occupation of the Palestinian territories through illegal settlements particularly in the Jordan Valley as it is the most fertile area in the West Bank.
Over 50 Jewish settlers defile Aqsa Mosque in morning tours

According to local sources, about 57 settlers entered the Mosque through al-Maghariba Gate in groups and toured its courtyards and plateaus as they were receiving information about the alleged temple mounts from rabbis.

During the presence of settlers inside the Mosque compound, entry restrictions are imposed on Muslim worshipers at the entrances leading to the Mosque and their IDs are seized until they leave the holy place.
Jewish settlers organize provocative march in Old City of al-Khalil

Dozens of extremist Jewish settlers on Saturday evening marched provocatively through the streets of the Old City of al-Khalil under security guard.

Local sources said that the settlers’ march started from al-Laban Market and headed for the Municipality Plaza and then al-Shuhada Street, adding that the Israeli occupation forces cordoned off the Old City and its streets and obstructed the movement of Palestinian citizens.

Resident Mohammad Sawafta, from Bardala town in the Northern Plains of the West Bank, said the colonists pelted his car with stones, causing serious damage.

He added that the colonists also attacked many cars in the area, while the soldiers failed to intervene and stop them.

The Israeli occupation forces (IOF) on Saturday removed the pole carrying the Palestinian flag from the archeological site in Sebastia north of Nablus.

Sebastia mayor Mohamed Azem said that Israeli soldiers stormed his town and removed the flagpole from the ancient site and prevented local residents from entering the area.

In a separate incident, a horde of Jewish settlers on the same day hurled stones at a Palestinian car near Huwara checkpoint in southern Nablus.

Mohamed Sawafta, from Bardala village in the northern Jordan Valley, reported that a group of masked settlers showered his car with stones and caused considerable damage to it.

Sawafta added that Israeli soldiers were at the scene watching the settlers attacking his car without taking any action.
Colonialist Settler Attacks A Palestinian In Hebron 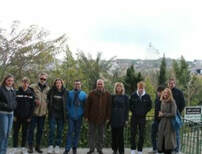 An illegal Israeli colonialist settler attacked, on Saturday morning, an official of the Hebron Rehabilitation Committee, in the Sahla neighborhood, near the Ibrahimi Mosque in the Old City of Hebron, in the southern part of the occupied West Bank.

Husam Abu Hadid said the colonist assaulted him while he was walking in the area and added that the attack happened despite the presence of Israeli soldiers, constantly deployed in the area.

He told the Palestinian News Agency WAFA that he was walking in the neighborhood, and just after he crossed the military roadblock in the area, an Israeli colonialist settler assaulted him, and struck him in the head, in addition to hurling insults at him.

The Legal Advisor of the Hebron Rehabilitation Committee, attorney Tawfiq Jahshan, said that he filed an official complaint with the Israeli police.

The Palestinians in the Old City, including workers of the Rehabilitation Committee, are subject to constant violations by the soldiers, and the illegal colonialist settlers.

It is worth mentioning that the Norwegian Representative in Palestine, Ms. Hilde Haraldstad, visited the area, and toured with the members of the Rehabilitation Committee in the Old City, the Shuhada Street, the visitors Center and the Ibrahimi Mosque.
Soldiers Abduct Three Shepherds Near Hebron

Rateb Jabour, the coordinator of the National and Popular Committee against the Annexation Wall and Colonies in southern West Bank, said the soldiers, accompanied by many colonialist settlers, invaded the area, before the army detained the shepherds.

He added that the three shepherds are from Abu Younis and al-Jabarin families and stated that the soldiers released them later.

Jabour said that the colonists have escalated their violations in the area, and have been frequently attacking Palestinian farmers and shepherds, in addition to trying to prevent them from entering their own lands.

It is worth mentioning that the colonists have occupied a Palestinian hill, west of the adjacent Jibna village, and have been preventing the Palestinian owners of the lands, and the shepherds, from entering it.
Colonialist Settlers Carry Out Provocative March In Hebron

Dozens of illegal Israeli colonialist settlers carried out, on Saturday evening, a provocative march in the streets and alleys of the Old City of Hebron, in the southern part of the occupied West Bank.

Media sources said the colonists marched through the market area, and headed to the street of the City Council then to the Shuhada Street.

Israeli soldiers closed the entire area to the Palestinians, and prevented them from entering or leaving it.

In related news, the soldiers assaulted Mashhour al-Wahwah, a cameraman working of the Palestinian News & Info Agency (WAFA), while documenting the march.
Army Abducts A Guard Of Al-Aqsa Mosque

Israeli soldiers abducted, Saturday, one of the civilian guards of the Al-Aqsa Mosque in occupied Jerusalem.

The Palestinian Prisoners’ Society (PPS) has reported that the soldiers abducted Samer al-Qabbani, as he was leaving the mosque through Bab al-Asbat (Gate of the Tribes).

It added that the soldiers cuffed the Palestinian and took him to a police station for interrogation.

On Saturday morning, the soldiers abducted the secretary of Fateh Movement in occupied Jerusalem, and the head of the Palestinian Prisoners’ Society’s (PPS) office in the city, Nasser Qous.

In related news, the soldiers assaulted Mashhour al-Wahwah, a cameraman working of the Palestinian News & Info Agency (WAFA), while documenting a provocative march by illegal colonialist settlers in the Old City of Hebron, in southern West Bank.
Beit Ta’mir villagers fend off attack by Jewish settlers

Palestinian citizens on Friday managed to ward off extremist Jewish settlers after they attacked their plots of agricultural land in Beit Ta'mir village, southeast of Bethlehem in the occupied West Bank.

According to a local official, local residents of Beit Ta’mir confronted settlers who infiltrated their lands and forced them to leave.