Extremist Israeli settlers attacked on Thursday homes of Palestinians in the village of Ourif, south of Nablus, in the northern occupied West Bank.

A horde of extremist settlers escorted by military patrols assaulted Palestinians’ homes in Ourif village, sparking clashes with the locals.

Sometime earlier, Israeli settlers attacked Palestinian farmers in Ourif’s southern corners while they were carrying out works to open a new agricultural road.

Settler violence against Palestinians and their property is routine in the West Bank and is rarely prosecuted by Israeli authorities.

According to the Israeli rights group B’Tselem, “As the occupying force, Israel must protect the Palestinians in the West Bank. However, the Israeli authorities neglect to fulfill this responsibility and do not do enough to prevent Israelis from attacking Palestinians, their property and their lands.”
Israeli Colonists Puncture Tires, Write Racist Graffiti, Near Salfit 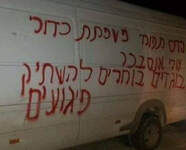 Abdul-Qader Abu Hakma, the head of Iskaka village council, said the colonists wrote anti-Arab, anti-Palestinian racist graffiti on several homes, and on the walls of the local mosque.

He added that the assailants also punctured the tires of twenty Palestinian cars, and wrote racist graffiti on them.
13 feb 2019
51 extremist settlers break into Aqsa Mosque

Israeli soldiers attacked, Tuesday, the car of the Jihad Nawaj’a, the head of Susiya Village Council, near Yatta town, south of the southern West Bank city of Hebron, as he was driving near an Israeli military base.

Rateb Jabour, the coordinator of the National and Popular Committee in southern Hebron, said the soldiers attacked Nawaj’a’s car near the military base, which was built on Palestinian lands in Susya, and smashed some of its windows.

He added that the soldiers also obstructed Palestinian traffic in the area, while illegal colonist settlers attempted to attack the Palestinians.

It is worth mentioning that Susya village is one of many Palestinian communities, south of Hebron, and is subject to constant assaults and violation by the soldiers and the illegal colonialist settlers, especially since Israel intends to demolish it.

In 1948, some of the native inhabitants of the village were displaced from the area which became known as the ceasefire line, or the Green Line, separating the newly formed state of Israel in the historic land of Palestine from the West Bank, and isolating the village from Be’er as-Sabe’ (Beersheba).

The displaced Palestinians moved in with their relatives in Khirbet Susya village, and in 1982, Israel confiscated more Palestinian lands and built an illegal Jewish-only colony, carrying the same name of the village.

In 1986, the Palestinians were displaced again when Israel confiscated more Palestinian lands to annex them to so-called “Israeli Nature and Parks Authority,” after Israel declared the area as an “archeological site,” and they started living in Khirbet Susya, surrounded by the illegal Susya Israeli colony from the north, and the “national gardens” from the south.

Since then, the Palestinians have been trying to get Israel to approve the structural plan of their village, but to no avail, especially since the village is in what is known as Area C of the occupied West Bank, under full Israeli control.

Similar to hundreds of Bedouin communities in the Negev, the village remains unrecognized by Israel.
12 feb 2019
Palestinian shepherd injured in settler attack in Jordan Valley

A group of Israeli settlers attacked on Tuesday afternoon a Palestinian shepherd, as he was herding his flock of sheep in an open field in al-Farisiya village, in the northern Jordan Valley.

Local sources identified the attacked shepherd as Barakat Ali Daraghmeh and confirmed that he was transferred to a nearby hospital in Tubas to receive medical treatment.

Also in the Jordan Valley, Israeli forces arrested a Palestinian resident of Umm Jamal village, only one day after his brother’s detention.

On the other hand, Israeli forces ordered 50 Palestinian Bedouin families to leave their homes in the Jordan Valley ahead of a new military drill, for the second such move in one week.
Extremist Israeli settlers threaten murder of Palestinian family

Israelis residing in an illegal settlement outpost built on Palestinian land in al-Khalil threatened to kill a Palestinian family in case they do not leave their home.

At the same time, Israeli forces prevented al-Kifah human rights monitor from documenting violations in al-Shuhadaaa Street. Israeli settlers assaulted the group for the third day running and obstructed their work. The Israeli army declared the area a closed military zone and kicked out the activists.

Hordes of Israeli settlers on Tuesday morning forced their way into al-Aqsa Mosque under police guard.

The news agency said that 83 Jewish students from religious institutes and universities broke into the Mosque during the same period while accompanied by a senior Israeli officer.

Meanwhile, about 14 Israeli police officers took part in a separate tour inside the Islamic site.

The Israeli police forces deployed in large numbers in al-Aqsa courtyards and accompanied the settlers until they left the site through al-Silsila Gate.
11 feb 2019
In video - Israeli settler assaults activist, journalist in Hebron
Additionally, Palestinians are not allowed to drive on al-Shuhada Street, have had their homes and shops in the street welded shut, and in some areas of the Old City, are not permitted to walk on certain roads.

The Palestinian government has no jurisdiction over Israelis in the West Bank, and acts carried out by Israeli settlers often occur in the presence of Israeli military forces who rarely act to protect Palestinian residents.
Fanatic Israeli settlers break into Aqsa Mosque

53 Israeli settlers, escorted by policemen, broke into al-Aqsa Mosque as part of the morning break-in shift and carried out a round of sacrilegious tours.

The settlers attended sermons on the counterfeit history of the alleged temple mount.

Several worshipers have been searched and dozens more have had their IDs seized while attempting to enter al-Aqsa to perform their daily prayers.
Israeli settlers attack Palestinian vehicles in Nablus

Ghassan Daghlas, an official who monitors settlement activity in the northern West Bank, said that Israeli settlers threw rocks at Palestinian vehicles in Hawara town, southern Nablus, which caused damage to some of their windows.

The settlers also organized a large march in the town that spilled into violence.

No injuries were reported in neither of the incidents.
Settlers Stone Palestinian Vehicles in the West Bank

Extremist Jewish-Israeli settlers attacked Palestinian vehicles in the West Bank over the past night.

Local Al Ray sources reported that a group of Israeli settlers threw stones towards Palestinian vehicles on the Wadi al-Delb road, near the village of Ras Karkar, in the Ramallah district, causing damage to some of them, without causing injuries.

Palestinian vehicles near the Jewish settlement of Beit El, located on the land east of the city of Ramallah (north of Jerusalem), were also stoned by settlers, damaging a number of vehicles.

Settlers also carried out attacks against Palestinians and their vehicles in the southern city of Hebron, and shouted insults.

Israeli sources claimed that a Palestinian from Hebron carried out a stabbing attack, killing an Israeli women.

Last night, settlers attacked Palestinian houses in the Tel Rumeida neighborhood in the center of Hebron, throwing stones and gathering on Shuhada Street, which has been closed for years.

Dozens of settlers from the Kiryat Arba settlement and the settlement outposts in the city of Hebron gathered last night in the al-Sahla area, to the south of Hebron, and shouted in the loudspeakers, calling for the killing of Palestinians and carrying out retaliation against them.

A horde of 55 Israeli settlers, escorted by policemen, broke into al-Aqsa Mosque as part of the morning break-in shift and carried out a round of sacrilegious tours that lasted for over three hours.

10 Israeli cops dressed in civilian outfits also showed up at the site.

Several worshipers have been searched and dozens more have had their IDs seized while attempting to enter al-Aqsa to perform their daily prayers.
Israeli settlers attack Palestinian school in Nablus

Palestinian students were evacuated on Sunday afternoon from a high school in Nablus following a settler attack.

Anti-settlement activist Ghassan Daghlas said in press statements that a group of Israeli settlers attacked a high school in Urif village in Nablus.

According to Daghlas, the settlers, escorted by Israeli soldiers, stormed the school and started to open fire, which forced the school's administration to evacuate the students.
Israeli police arrest child, young man in Jerusalem

The Israeli police on Saturday evening arrested a Palestinian child and young man in Qalandia refugee camp in Occupied Jerusalem.