5 july 2016
10-year old girl arrested on settler children accusation
They then walked her off to the police station, despite her young age. Even under Israeli military law, that applies on all Palestinians in the West Bank, the arrest of Palestinian children is prohibited under the age of 12.

Under the Israeli civil law which applies even on settlers living in illegal settlements, in contrast, arrests of children are legal only from the age of 14.

Despite the girl being only 10-years old – a fact that was repeatedly told to the soldiers – the girl was taken to the police station. The girls mother was prevented by the Israeli forces to reach the police station, which is located on part of a street where Palestinians are not even allowed to walk. Luckily, the girl was accompanied by her aunt, but denied the presence of her mother.

The settlers in the meantime kept harassing the Palestinian family, throwing small stones at the family, sitting on the stairs outside their house, waiting and hoping for the release of the girl.

As the house is located directly opposite one of the many checkpoints, this happened in plain view of the Israeli forces, who in the beginning entirely ignored the events and intervened only when realizing that people started filming and taking photos.

After about half an hour, she was released, and Israeli forces explained to her family, that they were just being ‘nice’ as they were sure she threw the rock. The rock the settler boy accused her of throwing at them is so big, that the 10-year old girl would not even been able to lift it up.

This illustrates how Israeli settlers, even small children, have complete impunity for their actions, and Israeli forces act upon their every word and wish – even if acting illegally under the Israeli law.

This comes at a time where Israeli forces are enacting severe restrictions on Palestinians in the area around the Ibrahimi Mosque.
Settlers level Palestinians’ lands in Sarta town in Salfit

Settlers on Monday leveled Palestinian lands to expand Brokhin settlement which is established by force over Palestinians’ lands east of Sarta town to the west of Salfit.

Researcher Khaled Maali told the PIC reporter that the expansion works have been going on in Salfit governorate in full disregard to its violation of the international humanitarian law which prohibits the confiscation of lands under occupation or the construction of facilities for the occupying power over it.
Extremist Israeli Colonists Destroy Grapevines, Sheds And Uproot Plants 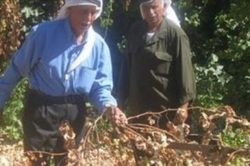 A number of extremist Israeli colonists destroyed, Monday, several grapevines, a shed and uprooted plants, belonging to a Palestinian farmer in the Zeitouna area, isolated, between the illegal Israeli colonies of Daniel and Eliezer, built on Palestinian lands, in al-Khader town, south of the West Bank city of Bethlehem.

Ahmad Salah, the coordinator of the Popular Committee against the Wall and Colonies in al-Khader, said the assailant broke the main gate leading to the Palestinian land, uprooted grapevine shrubs and cut their arbors.

“This was not the first attack of its kind; the area has been subject to constant similar assaults,” he said, “They want the Palestinian to abandon their lands in order to expand the illegal colonies that surround them.”
4 july 2016
Security Tightens around Glick (VIDEO)
2014, when an assassination attempt took place in Jerusalem, over Glick’s extremist policies and racial incitement towards Palestinians.
3 july 2016
Settlers of Brokhin settlement level Palestinians’ lands in Salfit

Settlers on Sunday leveled Palestinian lands to expand Brokhin settlement which is established by force over lands of the Palestinian towns of Broqin, Bediya and Sarta west of Salfit.

Researcher Khaled Maali told the PIC reporter that the expansion works have been going on in 24 settlements established over 18 locations in Salfit governorate.

Maali pointed out that the Israeli government had previously announced the establishment of hundreds of new settlement units in Brokhin settlement.

The construction of the new housing units has been done at the expense of Palestinians’ agricultural lands as well as green pastures, he added.
Israeli Settlers Injure Several Palestinians Near Nablus

Medical sources have reported that several residents were injured, on Saturday at night, after a number of extremist Israeli settlers, living in illegal colonies in the northern West Bank district of Nablus, attacked Palestinian cars and hurled stones at them, in areas in the southern and western parts of Nablus.

Ghassan Daghlas, a Palestinian official in charge of Israeli settlements’ file, said one of the wounded residents was moved to Rafidia Hospital in Nablus, when the assailants hurled stones on his car, causing various injuries after smashing his car’s windshield and windows, south of Nablus.

Several other Palestinians were injured in similar attacks that took place in different areas, west of Nablus, while many of them were moved to a number of hospitals for treatment.

Eyewitnesses said dozens of Israeli settlers cracked down on Palestinian citizens at the Hawara checkpoint and the Yitzhar crossroads, near the illegal Kadumim settlement, to the southwest of Nablus.

A human rights group said the Palestinian citizen Yakoub Sawalheh, from Nablus’ eastern town of Azmout, sustained wounds after he was heavily beaten by the Israeli settlers near the Hawara checkpoint and in the presence of Israeli soldiers.

Overnight, the IOF closed the Beit Fourik checkpoint, in eastern Nablus, for over a couple of hours after dozens of extremist settlers flocked to the area and vandalized Palestinian property.

A number of Palestinians sustained injuries in extremist settler attacks against their cars, to the west and south of both Nablus and Hebron.

Ghassan Daghlas, official in charge of settlement affairs, said that Israeli settlers threw stones against Palestinians’ cars, and a number of Palestinians hospitalized in Rafidia hospital in minor injuries.

Local sources reported that armed settlers closed a number of roads in southern Nablus and attacked the Palestinians’ cars.

Previously, the Israeli Knesset passed an amendment to civil law, establishing minimum prison sentence of three years for people who throw rocks at Israeli troops, civilians or vehicles. However, Israeli settlers are not subjected to this law.
30 june 2016
Israeli Fanatics Destroy Hothouses, Uproot Plants And Write Racist Graffiti, In Bethlehem

Ahmad Sukkar, the head of Wadi Fukin Village Council, told the WAFA Palestinian News Agency that the fanatics infiltrated into Palestinian farmlands, in the al-Fawwar area, south of the village, and destroyed two hothouses, in addition to uprooting dozens of plants, owned by Maher Assaf and Jamil Assaf.

Sukkar added that the assailants also uprooted plants in lands owned by Mohammad Saleh Assaf and Na’im Daoud ‘Ateyya, in addition to writing racist graffiti, including “death to Arabs.”

He also stated that the village has been subject to frequent similar assaults, carried out by extremists of the nearby Beitar Illit colony, illegally built on Palestinian lands owned by residents of Husan, Nahhalin and Wadi Fukin.
27 june 2016
Israeli Soldiers, Undercover Officers, Invade The Courtyards Of Al-Aqsa Mosque
“The Al-Aqsa Mosque was calm, and all was fine until nine in the morning, when suddenly, the police opened the Magharba Gate to allow the settlers through,” Khatib stated, “The soldiers and police surrounded dozens of worshipers, and attacked many of them.”

On Sunday evening, the police attacked many Palestinian and international worshipers, detained two Palestinians, and decided to force them out of the Mosque courtyards for several weeks.

The police also decided to deport two British men back to their country, after detaining them in the mosque courtyard. They have been identified as Mohammad Froukh and Julfan Heidjan.
26 june 2016
Settlers Attempt to Stab Palestinian near Jerusalem

A group of Israeli settlers assaulted, at dawn on Sunday, a young Palestinian man from Jerusalem, while he was at his place of work in the Ramot settlement, to the west of Jerusalem. The group reportedly tried to stab the man in the neck.

The young man was identified as Mahfouz Karlo Khaio, according to Al Ray. He said that a group of settlers attacked him at his job on Abrham Rikanti street, in Ramot, and severely beat him.

Khaio added that one of the settlers tried to stab him in the neck with a knife, before he managed to escape, and after being lightly injured in his head.

The young man Khaio lives in the Old City of Jerusalem and works in painting and repairing roads in the Ramot settlement. The man pointed out that the settlers were verbally abusing him along with his colleagues, but he didn’t expect the physical abuse, as he put it.
Israeli Army Kidnaps Eleven Palestinians, Three South Africans, In The West Bank, Injures Five

In Ramallah, the soldiers searched a few homes and kidnapped a Palestinian, identified as ‘Eid Tal’at Rimawi, 23, from Beit Rima town.
In occupied Jerusalem, the soldiers kidnapped Saleh Bader Abu ‘Assab and Mohammad Naseef, in addition to three South African men, and one Palestinian from Jenin, protesting ongoing Israeli invasions into the Al-Aqsa Mosque.

Dozens of Israeli soldiers and fanatic settlers stormed the courtyards of the Al-Aqsa mosque, before the army assaulted many worshipers who protested the provocative tour.

The soldiers prevented all worshipers below the age of 30 from entering the mosque, and opened the al-Magharba Gate to allow dozens of Israeli extremists into the courtyards. The mosque was only opened to Muslim worshipers after 11:30 before noon.

At least five persons were injured during ensuing clashes between the worshipers and the invading soldiers. The wounded were moved to the Al-Makassed Hospital in Jerusalem.
Yishai Schlissel receives life in prison

Yishai Schlissel, who stabbed Shira Banki to death who was marching at the Gay Pride Parade in Jerusalem in July last year, was sentenced by the Jerusalem District Court on Sunday morning to 31 years in prison.

A further 25 years were handed down for six counts of attempted murder. The state also requested that the court sentence him to an additional 60 years.

“His long prison sentence did not bring about a change in his ways. His dark zealotry that stops him from seeing people as people continues to guide him even now,” the judge wrote in his indictment, the judge wrote. The court also ruled that Schlissel compensate the victims of his attack with 2.64 million shekels.

“We have here, a man who does not see a human being before him. He is a cruel man," the judge continued. "This dangerous man can no longer walk around on the streets of Jerusalem or any other place. He had nothing with the young and pretty Shira. The indicted wrought havoc on Shira Banki’s family and on society as a whole.”

Two months before the march, Schlissel completed a ten-year prison sentence for carrying out a stabbing attack at the Gay Pride Parade in 2005. After he was released from prison, he expressed his opposition to the approaching march, both in the media and Haredi synagogues in Jerusalem.