An armed illegal Israeli colonialist settler opened fire, on Sunday evening, at several Palestinian homes in the al-‘Arroub refugee camp, north of Hebron, in the southern part of the occupied West Bank.

Eyewitnesses said the colonist stepped out of its car near the main entrance of the refugee camp and fired several live rounds before fleeing the scene.

The attack did not lead to casualties, while Israeli soldiers invaded the area, and fired many rubber-coated steel bullets, gas bombs and concussion grenades at Palestinian protesters and many surrounding homes.

Among the detainees are two kids from al-Arroub refugee camp in al-Khalil, according to local sources.

In Jenin, the IOF stormed and ransacked the house of prisoner Islam Wishahi from al-Shuhada village.

Wishahi stabbed an Israeli jailer in the Negev jail during a violent raid by forces on cells last week. Soldiers opened fire at him and injured him at the time and he has been isolated since then.
Israeli police allow dozens of settlers to defile Aqsa, arrest guard

Senior Awqaf official Firas al-Debs said that the Israeli occupation police allowed dozens of settlers to enter the Mosque through al-Maghariba Gate and tour its courtyards.

Debs added that about 38 settlers defiled the Mosque and performed rituals near the Bab al-Rahma prayer area.

He also said that police officers rounded up Aqsa guard called Wisam al-Hasheem after he opened the Mosque’s Bab al-Rahma.

Over 20 Aqsa guards and 150 Palestinian citizens have been banished from the Aqsa Mosque since the recent events over the Bab al-Rahma area.
30 mar 2019
Israeli Colonists Invade Palestinian Orchards In Northern Plains

He added that the colonists planted dozens of olive saplings in the grazing lands, which raised fears that they intend to illegally annex them to their colony.

It is worth mentioning that the colonists usually invade and uproot Palestinian farmlands and orchards in the area, and several parts of the occupied West Bank, in addition to flooding other lands with wastewater mixed with chemicals.

They added that the colonists cut dozens of olive trees in the attacked orchards, in the al-Mayadeen area, near the local Civil Defense Center.

The trees were planted more than eighty years ago, and are owned by a local villager, identified as Majed Raja Zibin.

Such attacks are frequent in several areas of the occupied West Bank, and include uprooting trees and farmlands, in addition to flooding them with wastewater mixed with chemicals, attacking farmers and shepherds.
Israeli settlers vandalize Palestinian cars in Jenin

A group of Israeli settlers on Thursday evening attacked Palestinian cars on Jenin-Nablus road in the occupied West Bank.

Local sources told the PIC reporter that the settlers gathered near the evacuated settlement of Homesh and hurled stones at the Palestinian vehicles passing in the area.

The sources said that several cars were partially damaged in the attack, warning that the settler attacks have been a real threat to the lives of Palestinian citizens in the area lately.
27 mar 2019
136 settlers defile Aqsa Mosque

According to local sources, the Israeli occupation police allowed 116 settlers to enter the Mosque in groups through al-Maghariba Gate and then allowed in 20 others, who were identified as students of Jewish religious institutions.

Meanwhile, the Israeli police closed in the morning several roads in east Jerusalem and its Old City and obstructed the movement of Palestinian citizens and vehicles at the pretext of finding a suspicious material.
26 mar 2019
Israeli settlers attack Palestinian school in Bethlehem

Groups of Israeli settlers on Tuesday afternoon attacked a Palestinian school in Bethlehem in the occupied West Bank.

Quds Press said, quoting local residents, that hordes of Israeli settlers, escorted by the Israeli army, gathered at the doors of an elementary school in Tuqu' town in Bethlehem, and blocked the movement of Palestinian citizens in the area.

The settlers attempted to break into the school and attacked the teachers and students, while dozens of Palestinian youths and parents rushed to the place and confronted the settler attack.
Horde of Israeli settlers defile al-Aqsa Mosque

Scores of extremist Israeli settlers on Tuesday forced their way into al-Aqsa Mosque under the protection of the Israeli police.

Quds Press said that 35 Jewish settlers stormed al-Aqsa Mosque in the early morning hours and toured the site for three hours and a half.

Israeli police forces deployed in large numbers in the Mosque and accompanied the settlers until they left the site via al-Silsila Gate.

More settlers are expected to come for another break-in following noon prayer, according to Quds Press, while the restrictions imposed on Palestinian worshipers have been tightened.
25 mar 2019
Dozens of Israeli settlers break into Aqsa Mosque

Hordes of Israeli settlers on Monday stormed al-Aqsa Mosque while escorted by the Israeli police and special forces.

The sources said that 43 Jewish students from religious institutes stormed the holy site during the same period.

The Islamic Awqaf announced in a statement that the Israeli police earlier in the day arrested a Palestinian old man for praying in Bab al-Rahma area and transferred him to a nearby interrogation center.

Other groups of settlers are set to come for a second break-in following noon prayer.

The Israeli settlers carry out mass break-ins into al-Aqsa Mosque on a daily basis, except on Fridays and Saturdays, in two rounds: in the morning and afternoon.
Settlers’ bus goes on fire in Qalqilya

An Israeli bus carrying settlers went up in flames on Sunday night after it was thrown with Molotov cocktails on a road near Jit village, east of Qalqilya in the occupied West Bank.

Eyewitnesses reported that bus burnt down entirely, while Israeli ambulances, fire trucks and Israeli forces rushed to the area.

However, there is still no information about Israeli casualties.

Later, the Israeli occupation forces spread through the area, closed West Bank roads and provided protection for settlers as they were hurling stones at Palestinian cars traveling on nearby roads where the incident took place.
Illegal Israeli Colonists Puncture Tires Of 30 Cars In Jerusalem

Several illegal Israeli colonists infiltrated, on Monday at dawn, Sheikh Jarrah neighborhood in the center of occupied East Jerusalem and punctured the tires of at least 30 Palestinian cars.

Locals said the colonists live in an illegal outpost in the Sammar area, right next to Sheikh Jarrah.

They added that the colonists slashed the tires of at least thirty Palestinian cars, parked in front or near many Palestinian homes.

The colonists also wrote racist anti-Palestinian and anti-Arab graffiti on many walls and cars and fled the scene.
Settlers Attack Palestinian Cars with Stones near Nablus

Israeli settlers, on Sunday, attacked Palestinian-registered vehicles passing near the village of Jit, south of Nablus, with stones , in the occupied West Bank, said WAFA correspondence.

Dozens of settlers gathered near the village and proceeded to attack Palestinian cars with stones, causing damages to two cars. No injuries were reported.

Forces reportedly intensified their military measures in the vicinity of Nablus, blocking off Qalqilia-Nablus road and setting up flying checkpoints at Beita town, to the south of Nablus, after an Israeli settler bus caught fire.
24 mar 2019
Illegal Colonists Attack A Palestinian Woman And Her Son In Hebron 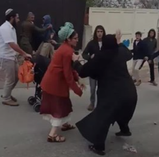 A group of illegal Israeli colonialist settlers attacked, on Saturday evening, a Palestinian woman and her son near their home in Tal Romedia neighborhood in Hebron city, in the southern part of the occupied West Bank, the Palestinian News &Info Agency (WAFA) has reported.

WAFA stated that the Israeli assailants, who live in an illegal outpost in the neighborhood, attacked the woman and her son, from Qa’war family, near their own home, and shouted insults at them. video

Tal Romeida is located west of the Ibrahimi Mosque and overlooks Hebron city center; it is subject to constant assaults and violations by the illegal colonists and the soldiers.

Locals reported that Israeli settlers from the nearby illegal Israeli settlement of Kiryat Arba threw rocks at Palestinian homes and vehicles in the Wadi al-Hasim area of the city.

Earlier during March, Israeli forces had sealed off the Wadi al-Hasin area, east of the Ibrahimi Mosque.