Discussions held in light of a petition filed by family of Mohammed Abu Khdeir calling for the demolition of his murderers' homes; state lawyer argues policy not warranted as a deterrence measure, while family attorney cites 'double standards.'

The High Court of Justice held discussions on Monday on whether the policy of home demolition should be extend to Jewish murders of Arabs. The talks took place on the heels of a petition submitted by the family of Mohammed Abu Khdeir ,16—who was kidnapped and brutally murdered by Jewish terrorists in July 2014—calling for the homes of the culprits to be destroyed.

The policy is frequently carried out as a deterrence measure against Palestinians who have committed terrorist attacks.

During the discussions, the High Court justices posed difficult questions to representatives of the state by asking if, and why, different protocol should be applied to Arabs and Jews committing acts of terror.

“There can’t be double standards. There has to be a demolition of the houses of murderers,” said the lawyer representing the Khdeir family.

The state representative rebuffed the point by stating that the demolitions are designed to serve as a deterrence and prevent the next murder.

Taking this point further, Justice Neal Hendel responded by asking, “What does it matter to me if it is an Arab or a Jew?,” if indeed the policy is intended to prevent a murder. “If we say that we are prepared to employ this policy against a specific group of people and not against another it raises certain problems.”

Offering an answer to the question, which has long been asked in the Israeli establishment and society as a whole, the state lawyer cited the revulsion felt by the families of Khdeir’s killers which rendered the need to issue a demolition order pointless.

“It is said that in Arab society there are more supporters and that the deterrence will be infinitely stronger,” said Elyakim Rubinstein, vice president of the High Court. “But still, since there are extremists in Jewish society that have done these kinds of terrible things, even if the deterrence is carried out on the assumption that it will influence a small number people, it will still save lives,” he posited.

Elyakim then laid out a hypothetical situation to illustrate the point. “If five attackers in the Jewish society planned five separate attacks and three of them are deterred from doing so because they don’t want to lose their homes, we have achieved something.”

Justice Hendel was also reluctant to accept the apparent discrimination existing between the state’s responses to terrorists of different religions and ethnicities.

“If this is the result for Arabs but not for Jews, we need to ask ourselves whether we are asking the right questions: are there standards? Because unfortunately, we are not dealing with one or two cases, there are more. So why not ask this?”

The state lawyer rejected the notion that the culprits should be treated on an even footing by propounding that the scope of the phenomenon of terrorism remains disparate for Arabs and Jews.

The claim prompted Justice Zvi Zilbertal to ask, “If it’s possible to prevent one murder through preventative action, will they do it only after 20 murderous attacks are be carried out? When we’re talking about human life, it is not the quantity that counts.”

Justice Hendel echoed his sentiment by adding, “If it can prevent five murders, then it is justified. It would be justified if it prevented even one such incident.”

Justice Rubenstein noted that while it is quite possible that home demolition in this particular case may not be warranted, the possibility of its application to other incidents involving Jewish terrorists should not be ruled out.

The state’s attorney responded by saying, “The state has not said that this mechanism could not be implemented with Jews. If a change were to occur, the circumstances would be considered, and a different decision could be reached, if God forbid there would be a Jewish wave of terrorism.”
Israelis launch construction of illegal outpost near Ibrahimi Mosque

Hordes of Israeli settlers on Monday morning set the foundations for a new illegal settlement outpost in al-Sahla area, to the south of the Ibrahimi Mosque, in al-Khalil.

Head of al-Khalil rehabilitation committee, Imad Hamdan, said Israeli settlers set metal foundations on a Palestinian pitch near al-Ibrahimi Mosque, paving the way for the construction of an Jewish-only ghetto.

According to Hamdan, the Israeli project covers an area of up to 500 square meters.

Earlier, the Israeli occupation army seized parts of the pitch and turned it into a military site.

Hamdan added that the move makes part of underway attempts, by the occupation authorities and settler gangs, to crack down on the Palestinians and force them out of the area so as to facilitate the misappropriation of their land and speed up the Judaization of the occupied territories.

The al-Ibrahimi playfield is located in al-Sahla area, in al-Khalil’s Old City, in the southern occupied West Bank.
Dozens of Israeli settlers break into al-Aqsa

According to Quds Press, heavily-armed Israeli forces were deployed in large numbers in the holy Islamic compound in order to pave the way for the settlers’ break-in via al-Magharibeh gate.

56 Israeli settlers broke into the Mosque this morning in total provocation to Palestinian worshipers, the sources reported.

Meanwhile, tight military restrictions were imposed on Palestinian worshipers’ entry into the holy shrine since the early morning hours.

According to Israeli sources, 14,094 Israeli settlers stormed al-Aqsa from September 2015 to October 2016. 3,000 of them broke into the compound in October 2016.
Settlers take over Palestinian house near Aqsa Mosque

A group of extremist Jewish settlers on Sunday took over a Palestinian house belonging to al-Bakri family in Bab Hitta neighborhood near the Aqsa Mosque.

Local sources said that Israeli policemen provided protection for the settlers and help them to seize it.

The settlers claim they took possession of the house illegally.

There is still no comment from the Palestinian homeowner on this takeover.
20 nov 2016
Extremist Settlers Raid Al-Aqsa Mosque

Local sources said that the settlers carried out provocative tours in the courtyards, and took pictures of various locations, according to Al Ray.

The sources added that the presence of worshipers and Quranic students, in the mosque, prevented the settlers from moving freely in the courtyards of Al-Aqsa.

Extremist Israeli settlers and politicians have been violating the sanctity of Al-Aqsa Mosque on an almost daily basis, and always under the protection of armed occupation forces, who often attack Palestinian worshipers who try to protect their holy site.
17 nov 2016
Israeli Colonists Cause Damage To The Church of Holy Sepulcher, Attempt To Occupy It 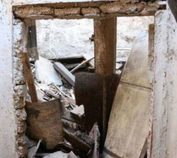 Many extremist illegal Israeli colonists, living in an outpost above the Church of Holy Sepulcher, in occupied Jerusalem, attacked the church property, causing damage, and attempted to occupy a room belonging to the church.

The attack caused excessive damage to the church property, while priests and church officials called the police, who later came to the church and were shown the damage.

The Nativity TV in Bethlehem has published a video of the attack’s aftermath, also showing a Greek Orthodox priest talking to Israeli police officers while inspecting the damage.

The video also shows illegal settlers in their outpost right above the building, with the Israeli flags raised above it.
16 nov 2016
Barkat threatens demolition of thousands of Palestinian homes

The Israeli Jerusalem municipality asked for 14 demolition orders for the homes of some 40 Palestinians in Beit Hanina, which Barkat claimed were built on private Israeli land.

"Unless Amona is legalized, we'll have to destroy hundreds or thousands of houses in Jerusalem too," Barkat said.

"The Amona verdict leaves us no discretion to legalize building offences," he said.

The demolition orders Barkat asked for are for homes in the Beit Hanina neighborhood, allegedly built on land privately owned by Israeli settlers and run by the General Custodian's office.

Barkat asked for the demolition orders following the High Court of Justice ruling this week to evacuate and destroy the structures in illegal Amona outpost, which was built on private Palestinian land.
14 nov 2016
Israeli court rejects appeal to postpone Amona eviction

Yesh Din human rights organization affirmed that the Supreme Court approved the eviction of Amona settlement by December 25 since it was built on private Palestinian land.

"The evacuation must occur before December 25," the court said in its ruling on Monday. "The court rejects the delay requested by the state."

The high court ruled in 2014 that Amona, northeast of Ramallah in the central West Bank, must be evacuated.