26 oct 2016
Guests in 'wedding of hate' face charges of incitement, possession of firearms

Groom Yakir Ashbal and right-wing activist Daniel Pinner among 13 indicted after dancing with firearms and mocking the murder of Palestinian baby Ali Dawabsheh.

Thirteen suspects were indicted on Wednesday for incitement and possession of firearms during what has been dubbed as the "wedding of hate," which saw guests mocking the murder of Palestinian baby Ali Dawabsheh.

Among the defendants are five minors aged 14-17, as well as groom Yakir Ashbal from Yad Binyamin. Another defendant is the wedding singer, Sinai Tor from Ramat HaSharon, who sang a song about building the Third Temple, adding lyrics like "The mosque will burn, burn" and "The mosque will explode, explode" and is accused of inciting and spurring the guests on with his songs.

According to the indictment, right-wing activist Daniel Tzvi Moshe Pinner from Kfar Tapuach danced at the wedding with a rifle, while wearing a shirt of Rabbi Meir Kahane's Kach party that says "No Arabs, no terror attacks." Pinner is also facing charges of incitement to racism and support of a terror organization.

Videos from the Jerusalem wedding of Yakir and Ronny Ashbal in December 2015 also show guests dancing while brandishing IDF-issued M4 and M16 automatic rifles, guns, knives and bottles made to look like Molotov cocktails to the song "And let me take one vengeance for my two eyes on the Philistines" (changed to "Palestinians"). Some of the guests were dancing with their faces covered, while several of the guests brandishing weapons cocked them.

Participants also stabbed, tore, and set fire to photos of Ali Dawabsheh, an 18-month-old baby who was murdered in an arson attack on their home in the village of Duma, and of his two parents, who were also murdered in the attack. The photos had the word "Revenge" written on them.

Two Jewish suspects—Amiram Ben-Uliel, 21, from Jerusalem, and a 17-year-old youth from the Samaria region--were indicted for the murder and involvement in the murder of the Dawabsheh family.

The Israel Police's Judea and Samaria District's Nationalistic Crimes Unit launched an investigation into the wedding following the publication of the videos, arresting and questioning several suspects. Among the suspects questioned were Ashbal himself and other right-wing activists, some of them minors. All suspects were released after a few days.

In addition to suspicions of incitement and possession of firearms, some of the guests at the wedding were "Hilltop Youth" who are suspected of violating a court order barring them of meeting other youth who were at the wedding.

Attorney Itamar Ben Gvir, who is representing Daniel Pinner and was a guest at the wedding himself, said in response to the indictments: "This is a populist move by the State Attorney's Office. I propose that before the State Attorney's Office files an indictment concerning this wedding, they file incitements against guests at weddings in Umm al-Fahm, who actually fire their weapons and not just dance with them."
25 oct 2016
97 Israelis break into al-Aqsa

Quds Press affirmed that 57 Israeli settlers and 40 soldiers stormed the Mosque via al-Magharibeh gate under the protection of heavily-armed Special Forces.

Earlier Tuesday, a security guard in al-Aqsa Mosque compound was arrested and taken for investigation in a nearby police station before being released soon afterwards.

Right-wing Israeli organizations called for intensifying settler break-ins into al-Aqsa, especially during Jewish holidays although the UNESCO had declared it a purely Islamic site.
3,000 settlers break into al-Aqsa within two months

The Israeli sources quoted the Israeli extremist settler Yehuda Glick as saying that 3,000 Israeli settlers broke into the holy shrine in less than two months.

The sources pointed out that the past week had witnessed unprecedented settler break-ins as 1,192 settlers stormed the Mosque. 448 of them stormed the compound on Thursday.

Right-wing Israeli organizations called for intensifying settler break-ins into al-Aqsa, especially during Jewish holidays although the UNESCO had declared it a purely Islamic site.
Illegal Israeli Colonists Install Tents In Palestinian Land, In The Northern Plains

Dozens of extremist Israeli colonists invaded, on Tuesday, a Palestinian land in Khirbit al-Himma, in the West Bank’s Northern Plains, and installed tents, after recently illegally occupying the land, and establishing a new outpost.

Bisharat added that, on Tuesday morning, the Israeli assailants closed the main road leading to Khirbit al-Himma, with rocks and tires, and prevented the Palestinians from entering or leaving it.
Palestinian Man And His Wife Injured After Being Rammed By A Settler’s Car 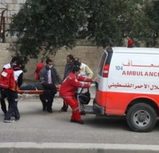 Medical sources have reported that, Monday, that a Palestinian man and his wife suffered serious and moderate wounds after being struck by a speeding car driver by an Israeli colonist’s car, east of Qalqilia.

The Palestinian Health Ministry has reported that the man suffered life-threatening wounds, and his wife suffered moderate injuries, when the Israeli driver, who lives in a nearby illegal colony, struck a horse-diver carriage the two were riding.

It added that Palestinian medics rushed to the scene, and moved the man and his wife to Darwish Nazzal Hospital, in Qalqilia, but later moved the man to a hospital in Nablus, due to the seriousness of his wounds.

Local sources said the man, Mohammad Daoud, 58, and his wife, were heading to their farm, east of Qalqilia, and were struck by the Israeli car while crossing the road.
24 oct 2016
Israeli settlers organize marches near al-Aqsa

According to the PIC reporter, the settlers performed Talmudic rituals in the Old City of Jerusalem and near and around the Aqsa Mosque amid heavy protection of Israeli police.

On Sunday, 346 Israeli settlers escorted by police forces desecrated the Mosque and toured its courtyards and exterior passages.

According to the PIC reporter, 30 Israeli settlers stormed the town and erected a number of tents and mobile houses before performing Talmudic rituals in total provocation to local residents.

Israeli settlers’ attacks have been notably escalated in occupied West Bank and Jerusalem in coincidence with the Jewish holidays.
Over 240 settlers defile Aqsa Mosque

Local sources in Occupied Jerusalem said that different groups of over 240 settlers escorted by police forces entered the Mosque and toured its courtyards and exterior passages.

They added that over 860 foreign tourists also toured the courtyards of the Islamic holy site in the morning.
Settlers build new illegal outpost on Palestinian-owned land

A new illegal outpost is being established by Jewish settlers in the northern Jordan Valley on privately owned Palestinian land, according to Haaretz newspaper.

The outpost is located in close proximity to the illegal outpost, Givat Salit, which was created in 2001, the newspaper said Sunday.

An armed man identified as “Tzuriel” and called by his friends as the chief of the new outpost refused to answer questions on the matter from a Haaretz reporter who visited the area last Thursday.

Although the coordinator of government activities in the occupied territories claimed on Thursday that a stop-work order had been issued against the outpost and that construction at the site was halted, a visit by Haaretz on the same day revealed that construction was ongoing.

The area in which construction is being carried out have expanded to an adjacent hilltop and included the deployment of a water pipe and a livestock pen.

More than a week ago, the settlers at the outpost escorted by their armed chief started threatening Palestinian shepherds, and preventing them from bringing their flocks to their regular grazing lands on the hilltop.

On September 27, shortly after the outpost was established, armed elements of the Israeli civil administration demolished Palestinian crude homes belonging to the family of Ayoub and displaced the residents, who have lived and worked as shepherds at the site for many years.
4 Palestinians kidnapped by IOF from Jenin

The captives have been identified as Amar Abdul Baset, Muneer Redwan, Ahmad Sleiman, and Abdullah Hashem.