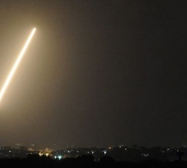 Palestinian sources in Gaza said the soldiers fired shells into monitoring sites used by fighters of the Al-Qassam Brigades, the armed wing of Hamas.

Meanwhile, the Israeli army said a shell, allegedly fired from the Gaza Strip, landed and exploded in an open area in the Sha’ar HaNegev Regional Council of Settlements, causing no injuries or damage.

Israeli Ynet News said the warning systems were not activated when the shell was reportedly fired from Gaza, and that the army initiated an investigation into the issue,
27 june 2017
Hamas holds Israel responsible for recent escalation

Hamas Movement on Tuesday held Israel responsible for its “folly and irresponsible policies.”

The Movement also warned against the risks posed by such hostile acts and held the "Israeli enemy" responsible for the serious repercussions if such acts reoccur.

Spokesman for the group Fawzi Barhoum earlier denied Israeli claims that a rocket attack was carried out by ISIS elements in Gaza Strip and hit Israeli targets late Monday.

"Such statements are only a failed attempt to justify this serious escalation against the Strip," he added.

Israeli fighter jets have carried out multiple airstrikes overnight on a number of resistance sites throughout the Gaza Strip.

According to the PIC field reporter, several of the early Tuesday raids targeted Bader site belonging to the Ezzedeen al-Qassam Brigades, the armed wing of Hamas Movement, located to the west of the Strip.

No injuries were reported during the air raid; however, material damage was caused to the neighboring houses.

Israeli fighter planes also engaged in strikes against Mohamed Abu Harb resistance site in Rafah, located to the south of the Strip.

Palestinian farming lands to the east of Gaza were also targeted by Israeli mortar fire in Juhr al-Dik area, south of Gaza City, without causing any injuries.

Israel claims that the attacks were launched is response to a rocket fired from the Gaza Strip which landed near Sha'ar Hanegev settlement.

Israel has launched several wars on Gaza Strip, the last of which began in early July 2014. The military aggression, which ended on August 26, 2014, killed nearly 2,200 Palestinians and injured 11,100 others.
29 apr 2017
Lieberman: We do not seek another adventure in Gaza

Israeli war minister Avigdor Lieberman has said his government does not seek another military adventure in the Gaza Strip as long as the situation remains calm.

In press remarks to the Hebrew website Walla, Lieberman threatened that if another war was imposed on Israel by the Palestinians in Gaza, it would be the last and toughest and target all Hamas military leaders.

He claimed that Israel does not want to reoccupy Gaza and its only aim is to disarm Hamas, adding that if the Movement discarded its rockets and tunnels, the border crossings would be opened, the population’s hardships would end and a seaport would be attainable.

As for the government’s efforts to retrieve captive Israeli soldiers and citizens in Gaza, he said there is a crew commissioned to deal with the issue.

He added that the government cannot give false promises to the captives’ families, affirming the file could take years to finish.
18 mar 2017
Israeli Soldiers Fire Shells Into Northern Gaza

Israeli soldiers fired, on Saturday at dawn, several shells into Palestinian agricultural lands, in the northern part of the besieged Gaza Strip.

Media sources in Gaza said the soldiers, stationed in military bases across the border fence, fired the shells into land, close to the border area, in Beit Lahia, and added that the attack did not lead to any casualties.

Israeli sources claimed the shelling was carried out after a shell was fired from Gaza, and landed in an open area in the Regional Council in Asqalan.
15 mar 2017
IOF claims rocket hits Sdot Negev region

The Israeli Occupation Forces (IOF) claimed Wednesday evening that a rocked fired from Gaza Strip landed in an open area in the Sdot Negev region.

No one was wounded and no damage was reported, according to the sources.

According to local sources, the Israeli military troops deployed at and around the Kissufim military base, east of Khan Younis, hit Palestinian farmlands in al-Qarara and Deir al-Balah with artillery shells.

The Israeli army also showered the area with randomly-discharged spates of flare bombs.

No injuries were reported in the Israeli onslaught.

There were no initial reports of injuries or damage.

The Israeli army spokesman said a rocket from Gaza slammed into an open area in Asheklon coastline, north of Gaza Strip.

Red alert sirens were not sounded as the rocket fell in an open area.

On Tuesday evening, red sirens were set off in Israeli settlements to the east of Gaza Strip. The Israeli army denied claims a rocket struck the area.
27 feb 2017
Jihad: Resistance has the right to respond to Israeli aggression

The Islamic Jihad Movement in Palestine said on Monday that the Palestinian resistance has the right to respond to the Israeli aggression on the Gaza Strip if it continued, and that the resistance will not remain silent whatever the cost is.

In a press statement by the spokesman of the Islamic Jihad, Daud Shihab, the Movement held Israel responsible for the escalation in the Gaza Strip.

Shihab said that the Israeli government is attempting through this aggression to alter facts and carry out its threats against the Palestinian people, stressing that all justifications voiced by Israel for this escalation are false.

At least 4 Gazan citizens were injured in a series of strikes conducted by Israeli warplanes and artilleries on Monday afternoon on multiple Palestinian sites in the Gaza Strip.
Israel hits Gaza with multiple airstrikes, injuring 4 Palestinians

Meanwhile, an Israeli reconnaissance plane fired a missile at a monitoring post east of Rafah city in the southern Gaza Strip.

A separate strike in the Nahda neighborhood east of Rafah was reported while no injuries were initially declared.

Along the same line, Israeli fighter jets fired a number of missiles at a resistance site in Beit Lahiya in the northern region of the Gaza Strip, the PIC reporter added.

On the other hand, Israeli media sources claimed that Israeli army targeted ten military sites used by Hamas Movement after a rocket fired from Gaza allegedly landed in an open area in southern Israel that caused no injuries or damages.
6 feb 2017
Hamas: We will not allow continuation of Israeli escalation

Hamas Movement warned Monday evening that it would not “allow a continuation of Israeli escalation against the people of Gaza.”

Spokesman for the Movement Abdul Latif Qanua held the Israeli occupation authority responsible for its recent escalation and its serious repercussions.

Israel is trying to detract attention from its internal crisis by targeting the Gaza Strip, Qanua told the PIC reporter.

He pointed out that any response will be in concordance with Palestinian resistance factions.

Israeli forces resumed on Monday evening attacks on the besieged Gaza Strip, injuring at least three Palestinians, in a series of airstrikes and artillery shelling in various areas of the enclave.
Army Fires Shells At A Qassam Site In Northern Gaza

Israeli soldiers fired, Monday, two shells into a site run by the al-Qassam Brigades, the armed wing of Hamas, Beit Lahia, in the northern part of the Gaza Strip.

The two shells landed in an open area, close to the “Palestine Camp,” causing minor damage without leading to any casualties.

The Israeli army issued a statement alleging that the attack was carried out in response to a shell that was fired from northern Gaza, and detonated in an open area in the “Eshkol Regional Council.”

IDF: strikes on Gaza a response to last month’s events

IDF issues statement declaring that pounding of Hamas targets is a retaliation for last month’s events and Monday’s attacks from Gaza in which a rocket was fired at the Hof Ashkelon region of Israel, and Hamas forces opened fire on an IDF force working near the border fence; Netanyahu: ‘There’s no way that someone can shoot at us and we don’t respond.’

IDF tanks and aircraft destroyed a total of six Hamas positions throughout the day Monday, after a rocket was fired toward the Hof Ashkelon area in the morning and Hamas forces opened fire on an IDF force working near the Gaza border fence in the southern Gaza Strip in the evening.

According to the IDF Spokesperson's Unit, no damage or injuries were caused by the rocket. Forces were dispatched to the site of its landing to search for remnants.

Later in the day, in response to further Hamas small arms attacks on IDF forces operating near the border fence in the southern Gaza Strip, IDF tanks destroyed a Hamas observation post, bringing the total number of Hamas positions destroyed by the IDF on Monday to six.

Shortly afterwards, Palestinian sources reported that tanks fired two shells at a Hamas lookout post adjacent to Beit Lahiya on the Israel–Gaza border, which destroyed the post. The IDF confirmed the attack

Prime Minister Benjamin, who on Monday visited British Prime Minister Theresa May in London, commented on the heated border events.

“I have instructed in no uncertain terms that we will respond to all shooting with heavy fire. That has been my policy over the last two years, since Protective Edge…Out policy is consistent and determined in our response,” the prime minister said.

“There is no way that someone can shoot at us and we don’t respond. We cannot constantly absorb (hits) and overlook them.”

Several hours later, Israeli Air Force planes attacked three additional targets belonging to Hamas's armed wing east of Jabalia. The IDF confirmed that both the tank and aerial strikes were in response to the earlier rocket. Its Spokesperson's Unit commented, "The IDF considers the Hamas terrorist organization solely responsible for goings-on in the Gaza Strip."

By 8pm Monday, the IDF released another statement saying that the strikes were not only carried out in retaliation for the day's attacks from Gaza, but also for acts of aggression which have taken place over the course of the last month.
Page:  2 - 1
Powered by