A  Palestinian teenager on Monday evening was shot dead by Israeli police forces after he carried out a shooting operation near the Aqsa Mosque’s Asbat Gate in the Old City of Occupied Jerusalem.

Local sources identified the martyr as 17-year-old Mahmoud Omar Kamil from the West Bank town of Qabatiya in Jenin.

Some Hebrew media claimed the young man was able to injure one police officer, but others said that the officer was lightly injured when he fell down during the chase.

According to news reports, the shooting in the Old City occurred at about 7 p.m. at a police guard post near the Aqsa Mosque.

The martyr approached a group of officers, took out a makeshift Carlo-style submachine gun and opened fire at them, but the firearm was not operating accurately and malfunctioned, forcing him to flee through the Old City streets.

Soon, many officers participated in an on-foot chase and some of them showered the teenager with volleys of bullets, killing him immediately.

Consequently, the Israeli occupation police put their forces on high alert, closed the Old City’s entrances and gates and rounded up two young men from the Aqsa Mosque.

Eyewitnesses said that police officers savagely stormed the Aqsa Mosque following the shooting incident and kidnaped two young worshipers from the Dome of the Rock prayer hall after physically assaulting them.

Officers were also seen maltreating and assaulting a number of Muslim worshipers as they were leaving the Aqsa Mosque through its gates following the nighttime Isha prayer.

In recent days, Jewish settlers, under military and security protection, escalated their violations and crimes against the Palestinians, their property and holy sites in different areas of Jerusalem and the West Bank, and such operation is seen as a natural reaction.
6 oct 2020
Palestinian young man killed by IOF shooting in eastern Tulkarem

The Israeli occupation forces (IOF) on Monday evening killed a Palestinian young man in an area near the illegal settlement of Enav in eastern Tulkarem.

The Hebrew media claimed that Israeli soldiers opened fire at three Palestinians near Enav settlement as one of them was trying to throw a fire bomb at an Israeli site, adding that a young man was shot dead and the others escaped the scene.

The victim was identified as ex-detainee Sameer Hamidi, a resident of Beit Lid town in Tulkarem.

Hamidi was released about two years ago after he spent three and a half years in an Israeli jail.
18 aug 2020
Israeli Soldiers Fire Missiles, Shells, Into Rafah 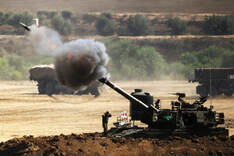 The Israeli Air Force fired, on Tuesday at dawn, several missiles into Palestinian lands, east of Rafah city, in the southern part of the besieged coastal region.

Media sources said the missiles caused excessive property damage to the targeted area, but did not lead to casualties.

They added that the soldiers also fired a few artillery shells into Palestinian lands, near Rafah. video

In addition, the soldiers fired live rounds and shells at a site, north of Beit Lahia, in northern Gaza, while the Navy fired a few shells into Palestinian waters nearby.

The Israeli army claimed it fired missiles targeting what it called “an observation post,” run by the al-Qassam Brigades, the armed wing of Hamas.

It added that the attack came “in retaliation to flammable balloons,” reportedly flown from Gaza during the day, and landed near Israeli colonies across the perimeter fence.
Updated: Israeli Officers Kill A Palestinian In Jerusalem
The slain Palestinian was shot with at least three live rounds in the chest, one of them struck his heart, and was left on the ground without medical attention for about 90 minutes, while the soldiers “secured the area”, and the Israeli medics tended to the wounded officer.

The soldiers later abducted his mother, and two of his brothers, while crossing the “Container” military roadblock, near as-Sawahra ash-Sharqiya town, and summoned a few of his relatives for interrogation.

Eyewitnesses said the soldiers fired a barrage of live rounds at the young man, inflicting serious wounds, before closing the area, and prevented Palestinian medics from approaching him.

One of the medics, identified as Emad Hijazi, of the Al-Amal Society For Medical Services, said that he and his colleagues were praying at the Al-Aqsa Mosque when they hear several shots nearby and rushed to the scene.

Hijazi added that the Israeli soldiers and police officers assaulted him and his colleagues, before forcibly removing them from the area.

The Palestinian eventually bled to death after being denied the urgently needed medical treatment, while Israeli medics tended to the wounded officer, 19, who sustained a moderate injury. video

The wounded officer is a member of the Israeli “Border Police;” Israeli medics transferred him to Shaare Zedek Medical Center, for further treatment.

The intensity of Israeli fire also caused an injury to one Palestinian woman, who was walking nearby with her daughter.

The woman said that after hearing the shots, and after being injured, she looked around trying to find her daughter, but she was nowhere to be found, apparently managed to seek shelter.

The eyewitnesses stated that one of the Palestinian worshipers, who was leaving the Al-Aqsa Mosque, also tried to tend to the wounded Palestinian but the soldiers and officers removed him from the scene and prevented anybody from approaching him.

The soldiers and officers later opened the Chain Gate, also one of the gates of Al-Aqsa, and allowed the Palestinian worshipers to leave through it.

Israeli police tonight shot and killed a Palestinian man who was not immediately identified in Jerusalem's Old City, according to witnesses and the Palestinian Red Crescent.

The Red Crescent said police did not allow its crews to reach the Palestinian as he lay on the ground bleeding near Bab Hutta, one of the gates leading to Al-Aqsa Mosque in the Old City. video video

Police claimed it shot and "neutralized" a Palestinian after stabbing and lightly injuring one of its men.