Israeli occupation forces last night detained 11 Palestinians, including minors, during raids throughout the occupied West Bank, according to the Palestinian’s Prisoner’s Society (PPS).

PPS said in a statement that Israeli soldiers detained four Palestinians from Bethlehem, three, including a 17-year-old, from Hebron, and one from Jenin.

This brings up the number of Palestinians detained by Israeli forces during the past two days to 19, most of whom from the West Bank district of Hebron.

Israeli soldiers abducted, on Saturday at night and earlier Sunday, at least eight Palestinians from several parts of the occupied West Bank.

The soldiers also invaded the al-Khader town, south of Bethlehem, especially the Old City and the al-Bawwaba areas, before storming and ransacking many shops.

The soldiers interrogated the many Palestinians in the stores, and questioned them while inspecting their ID cards.

In Hebron, in southern West Bank, the soldiers abducted a student, whose identity remained unknown at the time of this report, at a military roadblock near the Ibrahimi mosque, after the army alleged that he “carried a knife.”

Another Palestinian, identified as Rafat Odah Amro, was abducted from his home in Beit Masram village, south of Hebron, after the soldiers stormed and ransacked his home.

In Ramallah, in central West Bank, the soldiers placed concrete blocks at the main entrance of Deir Nitham village, west of the city, completely closing it.

It is worth mentioning that the soldiers placed concrete blocks, and an iron gate, at the main entrance of the village a few days ago, but the locals managed to remove them and reopened the road.

On Saturday at night, the soldiers assaulted and abducted Sanad Jo’eidi, 26, after stopping him at a sudden military roadblock, east of Qalqilia, in northern West Bank.

Also at night Saturday, the soldiers abducted a former political prisoner, identified as Bara’ Riyad Abu ‘Aabed, from Ya’bad town, southwest of the northern West Bank city of Jenin, after stopping him at a nearby military roadblock.

The soldiers stopped and searched dozens of cars and interrogated many Palestinians while inspecting their ID cards.

Violent confrontations broke out in the town between IOF soldiers and Palestinian citizens protesting the raid. The IOF showered the Palestinians with tear gas canisters, stun grenades and rubber-coated metal bullets. No injuries were reported.

At night Saturday the IOF brutally assaulted Palestinian youth Sanad Jueidi, 26, at a checkpoint near Qalqilya, detained him and transferred him to an undeclared destination.
6 feb 2020
Palestinian Hit and Run Driver Taken into Custody

A car driven by an unknown assailant plowed through a group of soldiers who were standing on a sidewalk, in Jerusalem, just before 2 am, Thursday morning, injuring 12 of the soldiers, one critically.

The driver has apparently been apprehended and taken into police custody.

Sand Al-Turman is a 25-year-old East Jerusalem resident with no prior security violations to his name.

Shortly before the attack, he police published a Facebook post, saying he has “found the answers,” Ynet Israeli news site reports. video

One of the 12 soldiers, who were all from the Golani Brigade, was seriously wounded and underwent surgery, while another sustained moderate wounds.

The other troops 10 were lightly injured.
Palestinian killed after injuring Israeli policeman in J’lem Old City

A Palestinian young man was killed by the Israeli occupation police on Thursday afternoon after he opened fire at police officers in the Old City of Jerusalem and lightly injured one of them.

The incident occurred outside the Aqsa Mosque, particularly between the King Faisal Gate and al-Asbat Gate (the Lions Gate), according to different news reports.

The police said the slain young man approached officers near al-Asbat Gate and opened fire at them, but they responded quickly by firing a hail of bullets at him.

Soon later, the Israeli police cordoned off the areas around the Old city, and closed off all Palestinian neighborhoods, including Silwan and Ras al-Amud. They also closed the checkpoints of az-Za'ayyem and Beit Hanina to the east of Jerusalem.

The shooting attack came hours after a car-ramming in Occupied Jerusalem earlier in the day in which 12 army soldiers were injured, one of them seriously.

A young man also suffered from an injury when a teargas canister hit his head and a paramedic was injured in one of his feet during the events.

According to the Red Crescent in Bethlehem, about 30 Palestinian citizens suffered from their exposure to tear gas fumes and were provided with on-site medical assistance.

The clashes erupted after Israeli police and army forces launched violent raids on homes and businesses in Bethlehem city and the nearby town of Beit Jala as part of a large-scale manhunt for the driver who carried out the car-ramming operation that injured 12 soldiers in Jerusalem at dawn Thursday.

During their campaign in the area, Israeli forces reportedly found the car used in the operation abandoned in the town of Beit Jala outside Bethlehem.

Tensions in the West Bank and Jerusalem have been heightened over the past week, following US president Donald Trump released his peace plan — informally dubbed as the deal of the century. The plan has received wide international condemnation as it is seen as overwhelmingly biased in favor of Israel and torpedoing the two-state solution to the Palestinian-Israeli conflict.

In the week and a half since the plan’s release, a significant increase in angry reactions to daily Israeli violations has been noticed in the West Bank and Jerusalem, with regular angry rallies, stone-throwing and strong opposition to Israeli arrest raids.

On Wednesday, a Palestinian teenager was shot dead by Israeli troops after he allegedly threw a Molotov cocktail at them in al-Khalil.

Another Palestinian young man, a Palestinian Authority policeman, was also shot dead during clashes with local youths in Jenin in the predawn hours of Thursday morning. The shooting incident happened under unclear circumstances.

The Israeli occupation army claimed the shooting of a PA officer was an accident and said it would investigate it.

Note: The gunman was from the northern city of Haifa and had recently converted to Islam, an initial investigation showed.
Palestinian shot by Israeli police in Jerusalem’s Old City, situation unclear 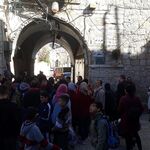 They said the police fired several bullets at the Palestinian, whom they suspected was killed even though there was no official confirmation of this from any side. video video video video

The Israeli police said the Palestinian opened fire at a border policeman injuring him lightly. Police responded by opening fire and “neutralizing” the Palestinian, which often means killing him.

Palestinians said police closed all gates leading to Al-Aqsa Mosque compound and the Old City following the incident and prevented people from entering or leaving the city.
Car Plows Through A Group of Israeli Soldiers in Jerusalem, Injuring 12

A car driven by an unknown assailant plowed through a group of soldiers on a sidewalk in Jerusalem just before 2 am Thursday morning, injuring 12 of the soldiers, one critically.

The driver fled the scene, and Israeli police later located what they say was the car responsible for the collision in the Palestinian town of Beit Jala. The owner of the car was not identified, though it bore Israeli license plates. video

Israeli authorities immediately declared the vehicular assault an “act of terror”, and put Palestinians in Jerusalem and the West Bank under a closure order.

They closed checkpoints and stopped all Palestinians between Jerusalem and the West Bank.

Israeli police spokesman Micky Rosenfeld stated, “the incident is being investigated as a terror attack”.

Five of the twelve injured soldiers were hospitalized and treated for mild to moderate injuries. One suffered critical injuries and was declared stable after undergoing surgery. video

According to the Jerusalem Post, the soldiers were on a “heritage tour” on David Remez Street in advance of their swearing-in ceremony to the Golan Brigades, which was scheduled to take place at the Western Wall in Jerusalem later Thursday.
Page:  4 - 3 - 2 - 1
Powered by