According to eyewitnesses Israeli occupation cops and soldiers showed up at the mourning scene and removed the tent on claims that it was illegally pitched in the area.

The Israeli policemen forced all Palestinian mourners out of the tent before they sealed off al-Madaris Street, in Jabal al-Mukbir, with concrete roadblocks.

A few hours earlier, youngster Barakat Kunbur was kidnapped by the occupation forces from the area.

The Israeli police spokeswoman said a preplanned military campaign is expected to be stepped up across East Occupied Jerusalem, particularly Jabal al-Mukabir area, on Monday.

On Sunday, nine Palestinian civilians, including five members of Kunbur’s family, along with his 12 sisters, parents, and wife, were arrested by the Israeli cops following an assault on the family home.

The Israeli occupation forces (IOF) arrested on Sunday a Palestinian child after raiding the town of Beit Furik, east of Nablus.

Eyewitnesses told the PIC reporter that clashes erupted in more than one location in the village in the wake of the IOF raid, adding that the soldiers fired gas canisters at the village youths before arresting Ayham Khatatba, 15.

Witnesses mentioned that clashes began from Nassarah neighborhood then Jabal al-Qa'dah reaching to the industrial area before the IOF withdrew from the town.
Israeli forces open fire at Palestinian farmland in Gaza

Witnesses told Ma’an in Gaza City that Israeli soldiers stationed at military posts across the border fence opened fire at Palestinian farmland in the eastern outskirts of Gaza City.

A similar shooting incident was reported by locals in the village of Khuzaa east of Khan Yunis in the southern Gaza Strip.

No injuries were reported in both incidents. An Israeli army spokesperson told Ma'an they were looking into the reports.

The day prior, Israeli troops fired intermittently at agricultural lands of Khuzaa.

Israeli military incursions inside the besieged Gaza Strip and near the “buffer zone," which lies on both the land and sea sides of Gaza, have long been a near-daily occurrence.

Palestinians who work near the unilaterally declared “buffer zone” between the Palestinian enclave and Israel often come under fire from military forces, as the Israeli military has not made clear the precise area of the designated zone. The practice has in effect destroyed much of the agricultural sector of the blockaded coastal enclave.

On Wednesday night, a Palestinian fisherman went missing after an encounter with Israeli forces near Israel’s sea-side buffer zone , and has yet to be found by Palestinian or Israeli authorities. Locals told Ma’an at the time that Israeli forces had purposely attacked and sunk al-Hassi’s boat, and the fisherman's family has since declared him dead.

The incident has sparked anger in the besieged coastal enclave. A sit-in protest was organized on Thursday condemning the “Israeli crime” and demanding an international intervention to protect Gaza fishermen and prosecute Israel for its crimes.

Despite the ceasefire agreement that ended the deadly war, the Israeli army regularly open fires on Palestinian fishermen and farmers along the border areas.
Severe clashes erupt near Occupied Jerusalem

Wafa news agency quoted eyewitnesses as saying that the IOF soldiers unleashed tear gas and stun grenades towards Palestinian students who replied by stone throwing,  closing the main road with rocks and setting fire to car wheels. No injuries or arrests were reported.

In a similar context, clashes were reported at the main entrance to al-Ram town to the north of Occupied Jerusalem from the side of the Israeli Separation Wall. Severe suffocation cases, among school students and people in the area, resulted from Israeli shooting of tear gas grenades.

Earlier at evening on Saturday, the same town witnessed clashes at its northern main entrance that lasted for late night hours with no arrests or injuries reported.
Israeli army kidnaps young man from his home in al-Khalil

Israeli soldiers on Saturday evening kidnapped a Palestinian young man from his home in Abu Asnainah neighborhood in al-Khalil city, south of the West Bank.

Local sources told the Palestinian Information Center (PIC) that an Israeli military force raided several homes in Abu Asnainah neighborhood, adding that a young man called Mohamed Rushdi was taken prisoner during one of those raids.

The soldiers’ practices provoked skirmishes with some residents in the town, according to local sources.

In a separate incident, a group of young men fended off Jewish settlers on a road north of al-Khalil city by hurling their cars with stones.

The Israeli Occupation Forces (IOF) launched at dawn Saturday a raid and search campaign throughout the West Bank.

Local sources told the PIC reporter that Israeli forces were deployed in large numbers in the western and southern parts of Jenin to the north of West Bank.

A car was being chased near Salem military camp, west of the city, for unknown reasons, the sources pointed out.

A local resident was also stopped and questioned as Israeli soldiers stormed Yamoun town early today, while a military checkpoint was erected south of Jenin city.

In Nablus, IOF soldiers confiscated a shipping container after breaking into Balata refugee camp east of the city.

Nearly five Israeli patrols stormed the area at 1 a.m. before confiscating the container.

In al-Khalil, a young man was arrested at Abu Rish military checkpoint erected near his house south of the city.

Local sources identified the detainee as Atta Abu Isneineh, 22, from the Old City.

The young man was detained for nearly an hour at the checkpoint before being taken handcuffed and blindfolded to an unknown detention center.
Dozens pray at Gaza Port in solidarity with missing fisherman

Dozens of Palestinian citizens performed the Friday prayer at the Gaza Port Mosque, west of Gaza City, in solidarity with the Palestinian fishermen.

The citizens flocked to the port at the invitation of the National Anti-Siege and Reconstruction Commission.

In his khutba (sermon), senior Hamas official and lawmaker Marwan Abu Ras highlighted the recent Israeli attack on a fishing boat and the resultant loss of a fisherman, expressing his Movement’s solidarity with the fishermen and their suffering.

“The Israeli enemy deprives the Gaza Strip population of their right to live and commits crimes against fishermen at sea,” Abu Ras said.

The Hamas official urged the Arab and Islamic countries to respond to the recent incident in Gaza waters by severing their relations with Israel and closing their embassies in Tel Aviv.

“We tell them (the Arab and Islamic countries) that Israel is fighting your morals, economy, tourism and politics. It is a common enemy to all of us,” he said.

An Israeli gunboat last Wednesday deliberately rammed into a Palestinian fishing boat off the coast of al-Sudaniya area, north of Gaza. This led to the loss of one fisherman and the sinking of the fishing boat.

Israeli gunboats are around Gaza fishermen every day, harassing them, shooting at them, damaging their boats, and making arrests. Sometimes fishermen are injured or killed during gunfire attacks.

Under the 1993 Oslo accords, Palestinian fishermen are permitted to fish up to 20 nautical miles off the coast of Gaza. Over the past 18 years, however, Israel has reduced the fishing area gradually to a limit of three nautical miles as part of its blockade on Gaza.

But fishermen and human rights groups say that, since the 2008-09 war in Gaza, the Israeli army regularly enforces a limit even closer to the shore.
Israeli Soldiers Open Fire On Homes, Lands, In Khan Younis 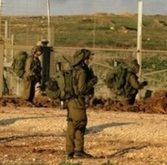 Israeli soldiers, stationed on military towers across the border fence, opened fire on Saturday morning targeting a number of homes and lands, east of Khan Younis, in the southern part of the Gaza Strip.

Medical sources said the attacks did not lead to physical injuries, but caused anxiety attacks among several Palestinians, especially children.

The attack came from several military towers, in army bases across the border fence, the WAFA Palestinian News Agencies has reported.
Page:  4 - 3 - 2 - 1
Powered by