A Palestinian father and his sons suffered bullet injuries last night when unknown assailants, believed to be Israelis, opened fire at them inside their home in Beit Awwa town, west of al-Khalil city.

Local sources told the Palestinian Information Center (PIC) that masked gunmen broke into the house of Khaled al-Sawiti in the town and opened fire from automatic weapons at him and his two sons.

They added that the father and his children suffered bullet injuries in different parts of their bodies and were rushed to hospital.

A source related to the family expressed his belief that the assailants were soldiers from the Israeli occupation army.
Israeli Navy Injures One Palestinian Fisher, Kidnaps Four Others, In Gaza Waters

Palestinian medical sources have reported that one fisher was shot and injured by Israeli navy fire, and four others were kidnapped, after the navy ships attacked them in Gaza waters, near the shore of Wadi Gaza area, southwest of Gaza city.

The Palestinian News & Info Agency (WAFA) quoted a fisher stating that the Israeli navy fired many live rounds, targeting several fishing boats, wounding one fisher, before the soldiers kidnapped him along with four others.

WAFA added that the navy confiscated two fishing boats that were attacked by its fire, after abducting the fishers.

A similar attack took place in Palestinian waters in Deir al-Balah, in central Gaza, forcing the fishers back to shore.

In addition, the navy ships surrounded two fishing boats in Gaza Sea, and boarded them before kidnapping four fishers, and confiscating their boats.

On Monday, Israel unilaterally decreased the fishing zone in the areas extending between Gaza Valley and Rafah to six nautical miles, less than two months after increasing it to nine.

Quds Press quoted eyewitnesses as saying that IOF forces, along with four bulldozers, advanced around 50 meters into the northern areas of the Gaza Strip near the Beit Lahya town.

A long-term ceasefire was reached on August 26, 2014 between Israelis and Palestinians under Egyptian mediation.

The ceasefire put an end to the Israeli aggression which lasted for 51 days and killed more than two thousand Palestinians, wounded eleven thousand others, and destroyed hundreds of houses.
30 may 2016
IOF suppresses peaceful march in Bethlehem

The peaceful march was organized by the popular committee for the boycott of Israeli products in Beit Jala town north of the city to champion boycotting Israeli products.

General coordinator for the committee Munther Amira said that the boycott campaign is scheduled to kick off during Ramadan especially that Palestinian consumption of Israeli products increases during the holy month.

He accused Palestinian agents of Israeli companies of flooding Palestinian markets with the Israeli products at the expense of Palestinian alternative products.

Eyewitnesses said that IOF soldiers opened fire at farmers and citizens near the Breij refugee camp while tending to their land.

They said that no casualties were suffered in the shooting attack.
Limited Israeli incursion east of Khan Younis

Nearly five Israeli military bulldozers carried out a limited incursion Monday morning into the eastern areas of Khan Younis to the south of Gaza Strip.

Monday's incident came as part of Israeli near-daily violations of the ceasefire agreement reached on August 26, 2014 between Palestinian resistance and Israel to end its 51-day aggression on Gaza.

Over May, a human rights report documented 21 Israeli similar violations including 14 shooting and incursion cases and 6 arrests.
Unprecedented large-scale raid and search campaign in Jenin, Nablus

The Israeli Occupation Forces (IOF) raided at dawn Monday Jenin refugee camp and the neighboring towns. Two citizens were arrested during the raid.

Local sources told the PIC reporter that nearly ten Israeli military vehicles stormed at 4 a.m. Jenin camp and arrested a young man after breaking into and violently searching his house.

Similar raid and search operations were carried out in the neighboring towns of Barqin and Massalya.

A second young man, from Joba town south of Jenin, was also detained while being in Haifa city within the Green Line.

In Nablus, Israeli forces carried out a large-scale raid and search campaign in a number of towns east of the city. The raid campaign lasted till morning hours.

Dozens of Israeli soldiers were deployed in several neighborhoods of Beit Furik town. A man and his wife were arrested in Beit Furik, while four other detainees were reported in Rujeib towns.

Two more detainees were arrested in Deir Hatab town. Dozens of local homes were violently stormed during the campaign, where tiles were uprooted and the furniture was damaged. Israeli forces claimed that they are looking for weapons.

Meanwhile, four citizens were arrested from al-Khalil and Bethlehem.
29 may 2016
Soldiers Kidnap Two Children, Injure Several Others In Bethlehem

Israeli soldiers invaded, on Sunday at dawn, Beit Fajjar town, and the Deheishe refugee camp, in the West Bank district of Bethlehem, kidnapped two Palestinian children, and summoned a third for interrogation.

One Palestinian was shot with a rubber-coated steel bullet, and several others suffered the effects of tear gas inhalation. The army also kidnapped a Palestinian in Ramallah.

The soldiers also summoned Saif Eyad Thawabta, 16, for interrogation in the Etzion military and security base, after they searched and ransacked his family’s home.

In addition, many army vehicles invaded the Deheishe refugee camp, south of Bethlehem, and clashed with dozens of youths, wounding a young man, 21, with a rubber-coated steel bullet, and causing many others to suffer the effects of tear gas inhalation.

In related news, the soldiers invaded the al-‘Arroub  refugee camp, and Bani Neim town, in the southern West Bank district of Hebron, and searched many homes.

The army also invaded Askar al-Jadeed refugee camp, east of the northern West Bank city of Nablus, and searched many homes.
The soldiers also summoned two young men for interrogation in the Salem military and security base.

In related news, the soldiers invaded the al-Bireh city, in the Ramallah and al-Biereh District, and kidnapped one Palestinian, identified as Majd Hamdan.
It is worth mentioning that the kidnapped Palestinian is the brother of Hikmat Hamdan, 29, who was killed, on December 16 2015, along with Ahmad Jahahja, 21, after Israeli soldiers invaded the Qalandia refugee camp, north of occupied Jerusalem.
28 may 2016
Army Kidnaps Two Palestinians In Hebron

The Palestinian Prisoners Society (PPS) has reported, Saturday, that Israeli soldiers have kidnapped two Palestinians from the southern West Bank district of Hebron; one was taken prisoner from his home while the other was abducted at a military roadblock.

The PPS said the soldiers invaded and searched several homes in Hebron city, and kidnapped one Palestinian, identified as Rami Hamdi Yousef al-Dijon, 33.

It added that another Palestinian, identified as Mohammad Ghaleb Abdul-Qader D’eis, 21, was kidnapped at the Container Roadblock, south of Jerusalem.

The kidnapped Palestinian is from Bani Neim town, east of Hebron.

Media sources said the soldiers, stationed across the border fence, fired many rounds at homes in the area between the al-Maghazi and the al-Boreij refugee camps, in central Gaza.
Young Palestinian man shot, injured by Israeli undercover soldiers

A young Palestinian man was shot and injured Friday evening by Israeli undercover soldiers at the northern entrance to Bethlehem to the south of occupied West Bank.

PIC reporter quoted eyewitnesses as saying that Israeli undercover soldiers opened fire towards a Palestinian while trying to throw a Molotov cocktail at the Israeli military watchtower at the entrance to the city.

The young man was immediately taken to hospital as he suffers live shot injury in his right foot, the sources added.

Along the same line, two Israeli soldiers were injured during clashes broke out in Takoa town east of the city. The clashes broke out when Israeli forces stormed the town amid heavy fire of teargas bombs and rubber bullets.

Dozens of local residents including a 7-year-old girl suffered teargas suffocation during the confrontations.

Also in Bethlehem, a Palestinian young man was arrested while on his way home in Khuder town. He was brutally attacked and beaten during his arrest. Meanwhile, Israeli forces opened fire Friday afternoon towards a Palestinian car while passing west of Ramallah.

Israeli media sources claimed that the Palestinian car rammed into a military jeep. The driver was then arrested, the sources added without giving further details.
IOF prevents Palestinian farmers’ access to their land

Local farmers told PIC reporter that Israeli soldiers deployed in large numbers in the western villages of the city and asked them to immediately leave their agricultural lands for being allegedly located near the Apartheid Wall.

The soldiers arbitrarily stormed the lands and forced us to immediately leave our land although it is not adjacent to the separation wall, one of the threatened farmers clarified.

As part of its status quo policy, Israel usually prevents Palestinians’ access to their lands of the villages fall in areas outside of the separation wall.
Israeli Army Injures A Palestinian Child In Bethlehem

Palestinian medical sources have reported, Friday, that a child was injured by Israeli army fire near Bethlehem’s northern entrance. A young from the al-Khader town, south of the city, was kidnapped in Jerusalem.

The sources said many army vehicles invaded, on Friday evening, the al-Khader town, south of Bethlehem, and clashed with dozens of local youths, who hurled stones on them.

The army fired several live rounds, rubber-coated steel bullets and gas bombs; one child, 14 years of age, was shot with a live round in his thigh, while many Palestinians suffered the effects of tear gas inhalation.

In addition, the soldiers kidnapped Anas Ismael Mousa, 20, from the al-Khader town, south of Bethlehem, while he was in Jerusalem.

The army said Mousa was wanted by the military, and was moved to an undisclosed interrogation facility.

The soldiers also summoned for interrogation, Daoud Mahmoud Salah, from al-Khader, after stopping him and examining his ID card, while he was in Jerusalem.
27 may 2016
Many Injured As Israeli Soldiers Attack Weekly Protest in Ni’lin 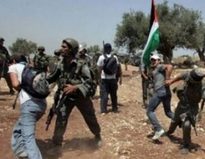 Israeli soldiers assaulted Friday, dozens of protesters holding the weekly protest against the Annexation Wall and colonies, in Ni’lin village, near Ramallah, wounding many persons, including a child and an elderly man.

Medical sources said the soldiers surrounded the village, fired dozens of gas bombs and concussion grenades at the protesters, and many surrounding homes, causing many to suffer the effects of tear gas inhalation.

They added that among the wounded were an elderly man, identified as Mustafa Rasheed ‘Amira, 85, and a child identified as Mohammad Saleh ’Amira, 10.

Spokesperson of the Popular Committee against the Wall in Ni’lin Mohammad ‘Amira urged the Palestinians to plow and plant their lands, as a form of resistance, especially since the military repeatedly uproots and burns farmlands, mainly olive orchards.
42 Palestinian families to evacuate their houses in Jordan Valley

The Israeli notifications threatened to confiscate livestock during the military exercises.

Palestinian families residing in the northern Jordan Valley are continuously subjected to evacuation for conducting Israeli military drills in the area in order to pressure the population to flee it, and leave their life-threatening homes.
Israeli Navy Opens Fire On Palestinian Fishing Boats

The fishers had to sail back to shore, fearing additional fire and escalation; no injuries were reported.